Cobra Kai: The Karate Kid Saga Continues takes you back to the glorious glories of the All Valley Tournament and beat 'em-ups, find out in our review

The feud between Daniel LaRusso e Johnny Lawrence it's never over. The pupil of the Master Miyagi and John kreese they fight once again with karate hits on the consoles in Cobra Kai: The Karate Kid Saga Continues, of which you are reading the review. We have been in the company of this beat em-up for several hours and the title entertained us, however, often leaving us not very full and a little perplexed.

THEappeal confuso and the too tepid fanservice, they weakened the butt of the crane we had in the barrel and we couldn't wait to launch. But be careful: it would be little objective to talk about the new videogame parenthesis of Daniel-San in terms of total hole in the water. Find out why in the next few lines.

The nirvana of the fist fight

Try to summarize what he represented Karate Kid for generation Y, who grew up in funkegging Eighties, would essentially imply grasping in a handful of lines the essence of what was essentially one of the greatest Pop phenomena of all time. Difficult if not impossible.

If quotes such as "Give the wax, remove the wax"And"They crush you like grapes”Have been pestering you since time immemorial we owe it to this one film saga. The same saga had the merit of expanding the audience of Bruce Lee's glorious Karate films and making it explode. martial discipline in the West. In short, Karate Kid is a true ninety piece of popular imagination. This YouTube and Netflix knew it all too well: the first put on an entire sequel series that shamelessly smacks of tribute to the original, the second bought the rights to the aforementioned series, Cobra Kai.

Cobra Kai: The Karate Kid Saga Continues is instead the title of the game we are talking about in this review. The latter essentially starts from what is seen in the TV series and does his best to try to make people forget Karate Kid's previous videogames. The history of the adaptations of the film saga boasts just a few forgettable voices such as The Karate Kid for 1987's NES, a game born from the sole intent of milking a little bit of the oceanic fanbase that the IP had at the time.

The title released last October 27, developed by the Brazilian Flux Game Studio and published by GameMill Entertainment, essentially speaks of nostalgia. A lacerating nostalgia not so much for Karate Kid but for that videogame genre that once punctually guaranteed arcade cabinets a sound indigestion of tokens: the beat ’em-up. The new videogame incarnation of the Karate Kid phenomenon seems a bit the result of an illegitimate union between Double Dragon and Streets of Rage. He must therefore be content with living hundreds of spans below the level of such fistfight nirvana. 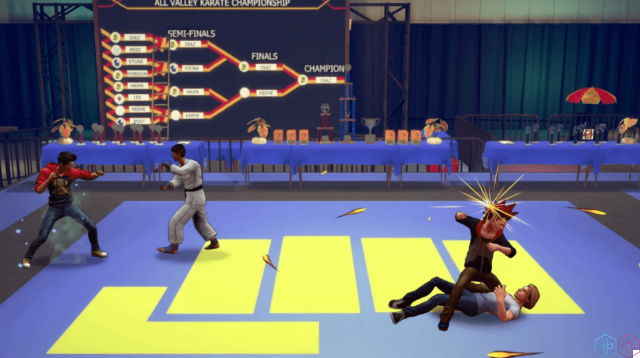 They have passed well 34 years since Daniel LaRusso has been awarded the title of All Valley champion Karate Tournament. Daniel-San, leaving behind the boy of yesteryear, founded the Miyagi-Do in memory of the sensei to whom he owes every moment of glory lived. The institution attended by Sat, daughter of Daniel is sadly marked in recent times by the clashes between the followers of Miyagi-Do and those of the fearsome Cobra-Kai, the dojo of Johnny lawrence, Daniel-San's eternal rival. The vision of the two martial arts experts is diametrically opposite given that for Lawrence karate is essentially a means of offense while for LaRusso it is exclusively synonymous with self-defense.


Over the course of the campaign you will find yourself trying to shed some light on some mysterious events which will lead to Daniel and Johnny and their respective followers colliding. In Cobra Kai: The Karate Kid Saga Continues, Flux Game Studio tried to propose a narrative component from double recall, we will see it shortly in the course of this review.

On the one hand, the software house has studied a unpublished plot that moves the steps from what is seen in the TV series. On the other hand, Flux offers you the possibility to play the narrative arc from double perspective of the students of Miyagi-Do and those of Cobra-Kai. In both hypotheses, the twists and turns and the narrative peaks turn out to be sporadic exceptions of a rather flat and predictable story.

It does not go down that the flashes of intertwining are very rare and telephoned. Every now and then you will have an interlude of about fifteen seconds with some dialogue while 2D artwork follows one another on the screen. Naturally, in this type of games, the narrative sector is a kind of distant background, but here it even seemed like a optional skippabile in total. 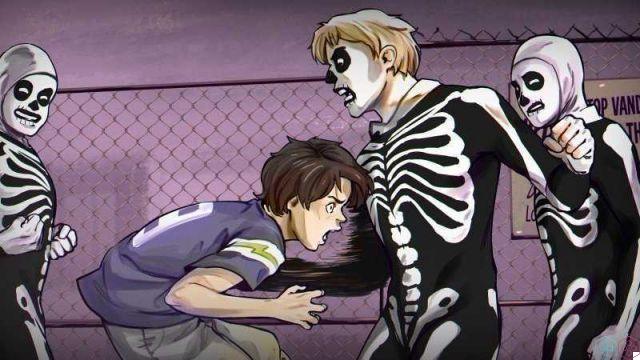 As we will see in this review, with Cobra Kai: The Karate Kid Saga Continues, Game Flux has aimed at a cartoonic transposition of the universe of Karate Kid. The cartoon was then joined by fantasy. So, yes, the Cobra Kai pupils throw flames from the limbs and those of Miyagi-Do create ice floes from nothing. In this unlikely way, the flicker of originality was sought in a beat 'em-up that is in some ways very traditional.


You will essentially have the opportunity to go far and wide several side scrolling levels with a team of 4 members that you will recruit during the various raids. You will make your way by grinding the square button of the DualShock 4 and X of the Xbox controller. In fact, 70% of the combos that can be performed in the game are based on this. With the lats you will instead trigger the special attacks. Some are exclusive of each individual character, others are common to all the students of a specific dojo.

Two goodies give a little sparkle to the whole: the parade and interaction (minimal) with the game environment. By running the first one with good timing you can trigger one immediate grip and send opponents into orbit. The second one foresees instead that in correspondence of some specific points, with the pressure of a backbone, you can smash the villains against parked cars, garbage cans and so on creating a lot of disturbance to the quiet city. You will then have the opportunity to collect baseball bats, bottles and cans here and there to do extra damage. You can also restore the HP of a KOed ally by hitting a particularly successful combo. Nothing transcendental, but these ideas will be gulps of air in a gameplay itself uninspired.

Fortunately, right from the start you will have the opportunity to have a second karateka armed with a controller take the field to back you up. a cooperative. We didn't have the chance to try this feature but it is probably the most effective remedy to the aforementioned dark gameplay situations. 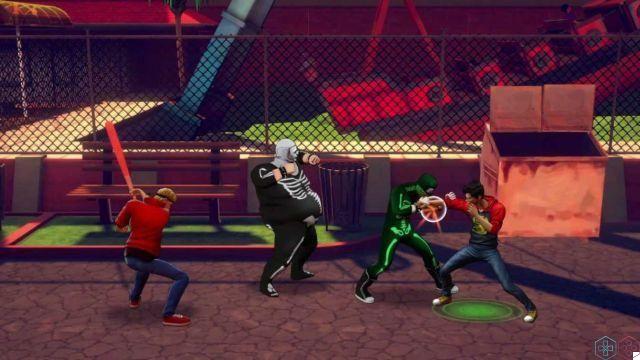 Because at the beginning of the review it was said that Cobra Kai: The Karate Kid Saga Continues is not a total hole in the water? Well because to act as a counterpoint to so much inflated gameplay from beat ’em up there is a system of progression quite interesting and unprecedented in this type of securities. The hard training of Daniel-san and company have been translated into various videogames skill tree. Accumulating tokens reluctantly stolen from the villains scattered throughout the levels you can unlock new skills for every single adept of your faction.

Skills are divided into offensive, passive bonuses and new finishers for use in battle. It must be said, that net of the progression, the range of special attacks available to your characters will be quite varied. There will be the opportunity to learn new strokes and make those that are already part of your martial repertoire more lethal and elaborate. Precisely this, therefore, is the only element to give one semblance of depth to the experience created by Flux Game. Basically, in light of the gameplay, between parades, basic combos and the aforementioned special attacks you will be able to slide without too many problems sometimes lengthy levels the immensity.

Lastly, the difficulties it will never be prohibitive, henchmen and various bosses will in principle be quite indulgent and within one ten hours you will be able to complete the campaign with both playable dojos. 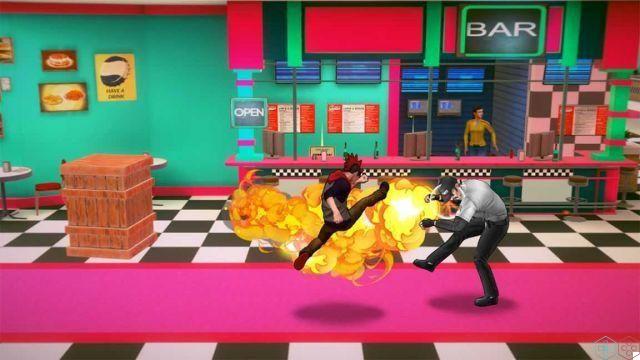 We come to the sore point. The intent of Flux Game with Cobra Kai was perhaps that of don't take yourself too seriously, visually speaking. Even considering this premise, it remains difficult to turn a blind eye to a technical sector which in its entirety is brazenly approximate. Suffice it to see the case of animations.

Characters as they move do not have no type of facial expression. You will essentially have dummies moving around the levels. Moving is a bad word because the various supporting actors will be plastered and woody and there will be skating until beyond belief. What's more, when forced to take hits Daniel and company will bounce around the screen like ping-pong balls. The animations of the various finishers are also false and disappointing.

- very poor backgrounds and the recycling of polygonal assets (the latter are very poorly made) are extremely perplexing. In short, everything appears inconceivably dated. To write this review on Cobra Kai The Karate Kid Saga Continues we tried the game on PS4 base. The experience was compromised by repeated and very clear-cut frame drops in the busiest scenes.

Sul front audio the title manages to defend itself. The adrenaline bases, even if they have nothing to do with the superlative songs of the TV series, they manage to stay on standard than many other brawlers and beat 'em-ups. There are nice guitar riffs and the whole thing is definitely rockeggiante and appropriate to the context. Also have Ralph Macchio e William Zabka (actors of the original series) al dubbing it is definitely a great plus. 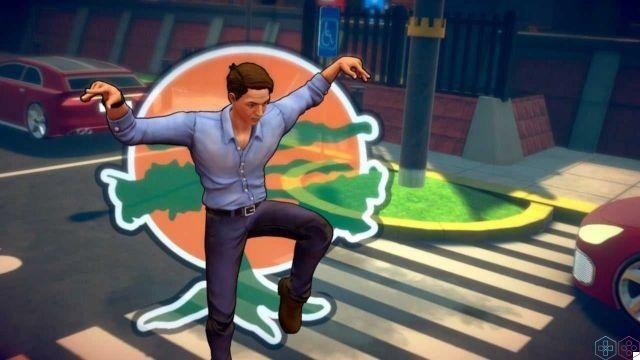 Cobra Kai The Karate Kid Saga Continues on the whole knew somehow entertain us. Before starting to play, you may want to accept a pact which implicitly Flux Game proposes to you: to pretend that Karate Kid takes place in a fantasy universe cartoonesco.

Only in this way will you be able to make you go down the new videogame incarnation of the exploits of Daniel LaRusso and Johnny Lawrence. The game has a twofold perspective: onorare Karate Kid e i beat ’em-upwhile proposing one change on the formula. In our opinion, the second attempt was much better than the first. We would have expected indeed much more fanservice. Longtime fans who have a blow-up of Miyagi in their room probably they will turn up their noses because of the fantasy amenities and cartoonish look of the product.

At the moment i 39,99 € required for the purchase seems a bit too much for a title that is approximate in many components. However, Game Flux has managed to refine an experience in itself a lot spartan with the expedient of role progression. The title is particularly recommended for beat 'em-up fans who are in the mood for something unusual.

Thank you for taking the time to read this review on Cobra Kai The Karate Kid Saga Continues. Stay tuned to techigames for all the news and curiosities from the world of gaming and beyond.

6 Give the wax, remove the wax