Review Ciconia When They Cry – Phase 1 For You, the Replacaeble Ones

The famous When They Cry series is back in a big way, so let's evaluate the first chapter with our review of Ciconia When They Cry

Ciconia When They Cry - Phase 1 For You, the Replacaeble Ones is the new, cryptic, chapter of the series When They Cry. Born from the writer's mind Ryukishi, known and respected in the industry by fans and colleagues, this video game is considered the legacy of the author. As a sub-category of visual novels, sound novels are works that combine only images, sounds and sometimes small animations to the screenplay.

Unlike the mother category, the sound novels do not have choice options, nor other particular forms of gameplay. So let's analyze this first chapter of the Ciconia cycle, Ciconia When They Cry - Phase 1 For You, the Replacaeble Ones, produced by 07th Expansion and available on PC.

To you, who are replaceable

In the distant future, where a terrible world war almost led to the destruction of the planet, humans have found a way to survive. Through nanomachines, they have managed to re-stabilize nature and the planet, artificially creating a delicate but strong balance. Extremely upset by wars, human society has reorganized itself so as not to create new conflicts. Power is entrusted to defenders of the peace, known as the Gauntlet Knights.

With their futuristic "gloves", these teenagers have a duty to watch over the "Glass Sea", an area now considered a "relic", a symbol of what has been lost. Coming from different nations, the young Knights will be the focus of the work, which represents a slow but too fast decline of a cursed future.

After all, young people are the protagonists of every era. However, an evil organization risks destroying that bright hope.


An essentially very heavy premise, that of Ryukishi. In Ciconia When They Cry, as predictable from the synopsis, a lot of weight is given to youth and what it represents. Both in the form of hope and as a mentality. In fact, without touching the specific characters, the story gives a lot of importance to youthful thinking in comparison to that of the "old", as well as to the sense of abandonment. A cynical analysis, but which sometimes presents a glimmer of childhood. A simple and naive way of thinking, which often permeates the dialogues between the protagonists. 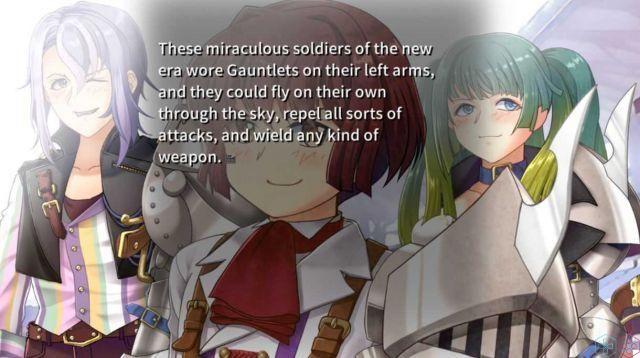 Many topics have been touched upon, and nothing really seems out of place in this first section. For those unfamiliar with him, Ryukishi is an author who has always shown great attention to minutiae. It is really rare that he leaves something completely to chance, and therefore we can well hope that the content introduced will not be dissolved by his talkative way of narrating. Before talking about the messages launched, however, it is important to stop on the way in which they are displayed. And here we come across the first defect of the work, namely the exposure.

In fiction, there are many lines of thought about the so-called "infodump". Filling a reader or viewer with information is on the one hand useful, because it helps to better contextualize the content. However, readers have limitations. For this you have to be good at dosing the explanations, so that they are absorbed at the right times and in the best way. Ryukishi, especially in Ciconia When They Cry, seems to have disliked this line of thinking. In fact, the first hour of reading is full of explanations and contents not too useful at the moment. Often it is repeated as well, giving the information easier to understand and memorize several times, leaving however the most theoretical and complex explanations all grouped in very heavy infodumping.

When the storks screech | Review Ciconia When They Cry

Such explanations are often found to be unsettling, useless for the immediate following reading. Which is not necessarily a problem, but it becomes when you overdo it. Ryukishi is talkative, and in Ciconia When They Cry he shows this trait with very little pity for new readers. The same feeling, however, does not occur with the monologues, which being more personal than the various characters, are able to entertain more. This is because in addition to explaining the situation from their point of view, they give a more complete view on the character of the subject.

While all this is at stake, the author realizes his inclinations and tries to correct the messes created by putting comic skits in the middle. Small dialogues terribly out of place and that add nothing to the reading. It would have been more functional and interesting to have the important concepts absorbed through the interactions between the characters. Despite everything, I cannot be dissatisfied with the content, which despite exaggerating it manages to do its duty. Ryukishi's catchphrases still manage to strike, and it doesn't take long to get glued to the screen. At least once you have passed the first section of the game. 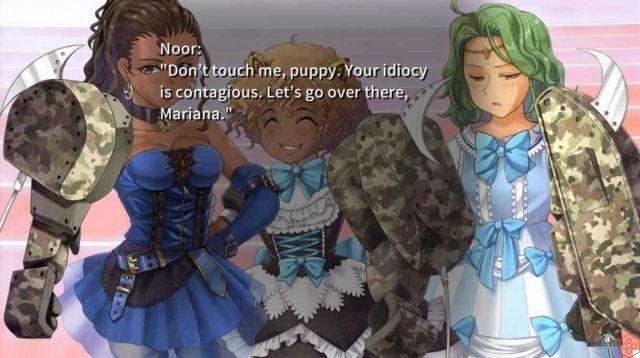 Bidimensionalità | Review Ciconia When They Cry

Moving on to the characters, we find ourselves in front of a varied set and that, on paper, does not have much to envy to the others When They Cry. Ciconia's promises are great, and the futuristic sci-fi setting manages to be original thanks to the management of nanomachines (which in an almost comical way play a key role) and small worldbuilding sections.

What is out of place, however, is the characterization of the characters, who despite having a potentially interesting background are subjected to typically Japanese stereotypes or clichés. These characteristics make it difficult to take seriously a large part of the cast, which still manages to give serious and intimate moments.
The relationship between the protagonist Miyao and Jayden is one of the factors that save the first half, thanks to the fact that in their vicissitudes current and vital issues for our society are seriously addressed. The importance of conveying a message is often forgotten by authors, and therefore the visual novel sector is lost in trifles and banalities. Thanks to Ryukishi for always being there to give a boost to this genre of video games. 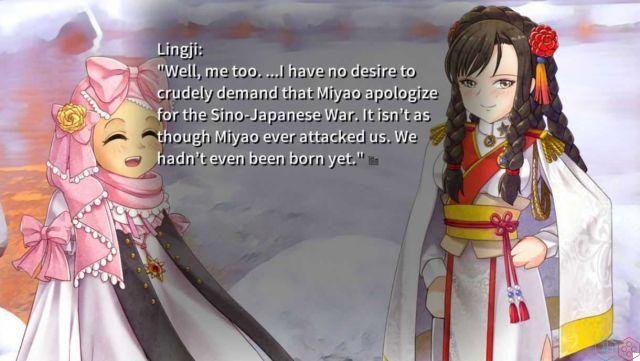 What is missing, what remains | Review Ciconia When They Cry

What is missing on this front, however, is a more decisive characterization of the secondary cast, which remains mostly anonymous. This is because Ciconia When They Cry struggles to leave intimacy between the characters, always keeping more than three people on screen at the same time. This choice prohibits the formation of specific, more complex relationships, and leaves the sweet unity between young people rather empty and unsatisfactory..

I'm sure good old Ryukishi will be able to fix this in the next three chapters. Instead, what makes the nose turn up a bit is the management of worldbuilding itself, because it focuses too much on the protagonists. The world is not shown to us much from different perspectives, which limits our view.
The crudest and most beautiful moments are precisely the rare instants where we are shown external characters, victims of the system. It would have been interesting to see the point of view of ordinary citizens as well, outside of the news and general commentary.

The criticisms of war, society, the old, the young and humanity itself are strong. Current. And although the work lacks bite due to the continuous not too requested explanations, towards the last 5 hours of play there is a revolution. The pace picks up, the situation degenerates and quickly we see the world we had come to know falling apart.

A bit funny, to tell the truth, but we have to respect “Mario, the scientist”, the man who revolutionizes the game's plot from nothing. I am as confused as you are.
In any case, the finale rides like never before and manages to give emotions that, at the beginning, I didn't think I could feel for Ciconia. All our preconceptions will be overturned, but this is not really new for those who know Ryukishi. Umineko, Higurashi, are all particular works and have become cult precisely because of their unpredictability. Ciconia does not miss the mark, and gives a lot of bread to those hungry for theories. 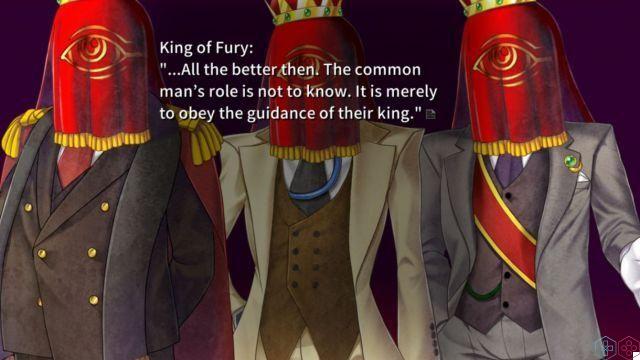 Visual novels are products that contain many arts, as are films and animated series. Unfortunately, I have to say that in the case of Ciconia When They Cry not everything really turned out well. The designs, curated by Ryukishi himself, have improved upon those of Higurashi and Umineko, but are far from good. Rose Guns Days, a work that passed somewhat in the shadow of Ryukishi himself, offers decidedly more pleasant and serious designs.

This is because they were done in collaboration with three other designers. The author, in this case, he should have followed the same plan. Simple lines, excessively childish and without stylistic merits. Hands in particular are creepy. On the contrary, the backgrounds have evolved, while remaining based entirely on photographs. Buying the drone made the production a lot of fun, and sometimes the backdrops were genuinely amazing.

The CG animations introduced are disappointing, completely out of time and far from any current standard. The very direction of many scenes leaves a lot to be desired, considering also the way in which the drawings were placed to represent the action. In fact, the dynamic scenes are mostly either confusing, or extremely weak, with one exception.

Fortunately, everything is saved by the sound sector, which even without dubbing manages to give a tone to the events and give the right emotions to the reader. Above all, the very last part literally plunges everything else into shame, showing a qualitative sprint that almost makes you doubt you are reading the same work. This bodes well for the future. 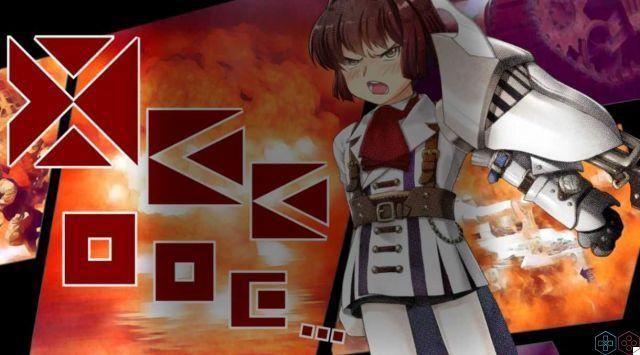 Brought by the stork

In the more than twelve hours of reading this Ciconia When They Cry - Phase 1 For You, the Replacaeble Ones a lot of meat was put on the fire. We talked about sexuality, war, roles, identity and all the feelings that these factors carry behind. The young age of the protagonists is not a negative aspect, but the extremeization of some very cliché aspects in their characters leads them to appear as specks.

The only one I personally liked right away was Chloe, ma knowing the author I think it will be easy to love the rest of the cast as well, at least in the future. The only negative note for the next releases is the price. 34 € it is too high a figure for what the work offers. Having put the dual language (English / Japanese) is not enough to give value to the game, which remains too expensive compared to the competition.

Definitely, Ciconia When They Cry – Phase 1 For You, the Replacaeble Ones it's a pretty heavy first chapter. While full of content that is also interesting, it fails to have a homogeneous and tempting narrative. Compared to the not too distant Rose Guns Days, there is an almost alienating heaviness, and this could annoy new readers. For those who already know Ryukishi, Ciconia is an unmissable event. Plot, characters, themes and music will surely conquer you, you just have to have the patience to explore this work.

Higurashi When They Cry: Abducted by Demons Arc, Vol 1 22,17 EUR Buy on Amazon7 Hope for the future

add a comment of Review Ciconia When They Cry – Phase 1 For You, the Replacaeble Ones