If you want to become the most skilled castle builder in the realm, then you can't miss the Castle Rooms review

Dragons, knights and castles to build, this is Castle Rooms, a card game for 2-4 players, lasting 20 minutes per game and recommended for ages 6 and up. It is produced by Little Rocket Games, an independent Spanish publishing house that creates board, card and book games. In this game you have to create the longest row of rooms in the castle, only in this way can you become the best builder in the realm.

Inside the box we find 64 cards divided into: 54 Room cards, 6 Dragon cards and 4 Knight cards. For the setup first of all we have to understand how many cards we have to use to play, so if you play in 4 you use all the cards, while if you play in 2 or 3 you have to remove from the deck 2 Dragon cards and 2 Knight cards. At this point, shuffle all the cards and deal two face down to each player. The remaining cards are placed in the center of the table and will be the common draw deck. Now you have everything you need to build your castle, let's find out how to play. 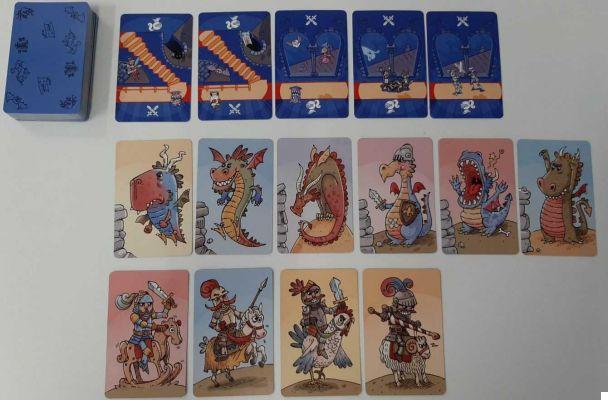 The games are played in clockwise order, each player has to build his own castle. The turn takes place in the following way: the player draws two cards that he adds to his hand, with these cards he must create one or more rows in front of him, placing them starting from the left and always continuing towards the right. During his turn the player can play as many cards as he wants, the important thing is that to pass the turn he does not have more or less than two cards in hand. NB If during a turn you find yourself having 3 or more Knight or Dragon cards in your hand and you cannot place them, then those in excess will be discarded until you have only 2 cards in hand.


How to create a row of rooms

To create a row of rooms you need to place a card in front of you and the other cards always to your right by matching corridors and stairs of one room with those of the next room, you cannot add cards to the left of the row. Every Room card has two symbols drawn at the top and bottom of it, they are a elmo and two crossed swords. When building a row it is mandatory that all symbols face the same side, for example if a row has the helmet at the top then all the cards linked to it must be positioned in such a way that they have the helmet at the top. It may happen that the Card rooms you have in your hand cannot join them to the already created row, in this case you can combine a card above or below the starting card thus creating another row, in this case they only have to match the helmet symbol or that of the crossed swords, neither stairs nor corridors must be connected. There is no limit to the number of files that can be formed. In the photo below you can see how a row is created and how another row can be attached to an existing one. 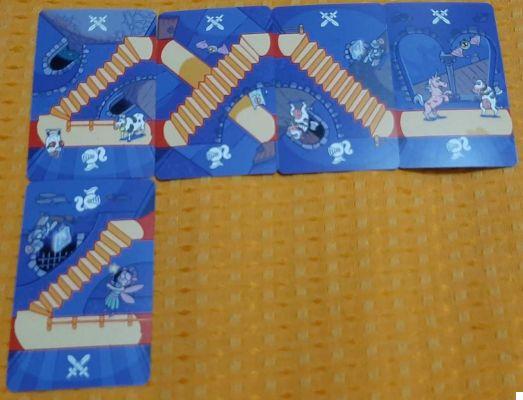 How to use the Dragon and Knight cards

Le Dragon cards they are used against an opponent, they must be placed to the right of a Room card in the castle of the player you want to attack, in that row he will not be able to build anything. The Knight cards instead they are used by the player who was attacked in his castle, he must put the Knight card on top of the Dragon card to eliminate it and to be able to go back to building on that row. In this case both cards are discarded.

Vince whoever manages to build a row of 10 Room cards consecutively. If the draw deck runs out before a player has reached 10 cards in a row, in this case the player with the longest row wins. If there is a case of draw the winner will be whoever made the second longest row, in case of another tie, the third row is checked and so on.

The Castle Rooms rules are quick and easy to memorize, the game runs fast, and the games are enjoyable. It is definitely suitable for the age indicated on the box and is a perfect game for families. The cards are resistant, the illustrations are really neat and there are many fun designs that can be found on them. It has no negative sides, the fact that you lack a bit of strategy and that you rely more on luck than anything else can only be good if you use it to make children approach board games and if you want to have fun without having to think too much.

7 Oh what a beautiful castle!

Cyclades Review: A divine game thanks to the expansion ❯

add a comment of Review Castle Rooms: oh what a beautiful castle