We went back up Pandora. The wind blows lightly bringing the sand into our eyes and while we clean ourselves here is a vehicle that whizzes towards us. Ah, the beauty of four-wheel drive that… hey, hey… * noise of a man being run over * Sorry for the trouble, our editor is dead, but I'll replace him. Enjoy this in peace, for what is possible Borderlands 3 review.

Ah Pandora. How many have we lived together. Shootings between bandits, various carnage, spineless hunters who died here and there. We haven't seen any suspicious movements for a while. Handsome Jack it was a godsend, but also a disgrace. But how can it be both together? Okay forget it. We are not then philosophers.

Here are four new types on the horizon. They look very tough. A giant robot, a mermaid, a breeder of strange creatures and… but those are twins! Ah no, one is just a hologram. They tell me their names respectively Moze, Amara, Fl4K (what a name) e Zane Very tough guys i four new hunters of the crypts. They gutted a handful of poor wretches in seconds. Let me stroke that robot.

Everyone has particular characteristics which make them very attractive. No, I'm not talking about the physical. I'm referring to those beautiful skills they have. Various fighting styles, various ways to deceive enemies or, better, make them colanders (almost, almost I'm hungry). Fighting with them will be pure fun. Exploring Pandora will be a breeze. Like? Are you telling me that the key fragments and crypts are not on this planet? And how do we get there? I don't have wings.

Stupid lout. Get out of my sight and kill yourself nothing. Your very brave master Claptrap will take care of taking you to the various planets

Oh, so there are other planets? - Borderlands 3 review

Well yes, today we all learned that in the universe there are various planets. The same is true of the solar system - there are so many of them too - where the adventures of the Borderlands saga take place. The adventure of the four hunters or just one, depends on whether you want to share the glory or not, will take place on the various planets, four in all. Yes, they are few, but they are still four habitable planets in a solar system. Three more than yours. Each will consist of various and very wide areas to explore. 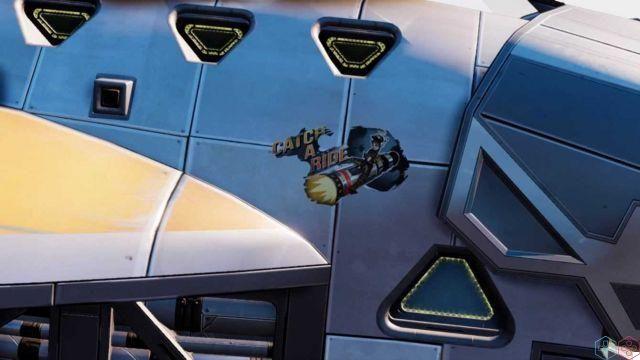 "Wooooow" you say. Wow a horn. Imagine yourself walking for miles and miles under the scorching sun, in the middle of the Pandora sand without even a shadow mirage and with a pack of Skag at the ribs. Or take a ride in the immense jungle of Eden-6 or in the middle of the city ​​of Promethea in which a civil war is underway. A unique fun ... * knock knock * What is it now?

Ah, demented humanoids. It amazes me that you are not yet extinct. Why walk when you can rotate… er, I meant driving those weird vehicles of yours?

Yes, OK. Maybe I'm getting confused in this Borderlands 3 review. Unfortunately my colleague is pretty dry now and I'm still here. But how did I forget about the vehicles. We can drive l’Outrunner, a four-wheeler, the Technical, another four-wheeler, and the Cyclone, a single wheel (yes it's a single giant wheel). Each will possess unique characteristics. Characteristics obviously mean machine guns and various artillery. 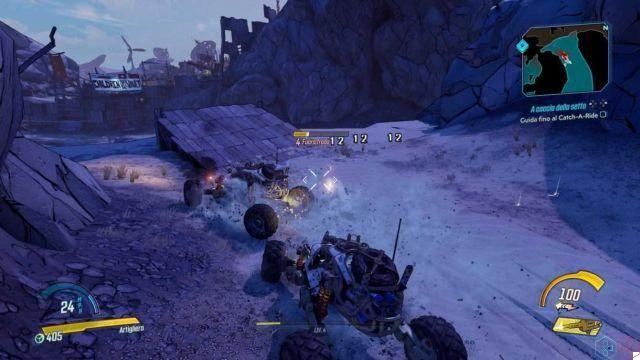 To stay on topic, you can also customize these spectacular gems. Maybe equip them with a better boost to fly properly off a cliff, or to more easily put under your wheels that Psycho who was trying to "accept" you as a friend. Ah, the lack of laws. Everyone does what he wants. You kill, you drive at insane speed, you steal. Hey, that's my stuff. You filthy thieves, go back. Here's what happens to trusting people as well play multiplayer sharing the loot.

Yes yes, ok. Playing with friends is fun. Maybe while the others kill each other to kill the various enemies, we can lie comfortably on our hammock sipping a cool Rakk-flavored drink. But those filthy scoundrels have stolen all the loot I earned with their sweat. This is not good. Of course, I don't have them help heal them, but we don't behave like that anyway. They could easily kill to stay alive.

I almost probably try to cross them for a moment Circle of Slaughter or Test media, hoping that strong enemies take them out. Or maybe it would be better to play alone? I'll have to work hard with my rifles, but I'll be earning new ones in no time. Look at that golden gun. My. And that purple submachine gun? Mine too obviously. And how much ammunition. Come and get me enough ... * loud explosion noise. Very strong to be honest * 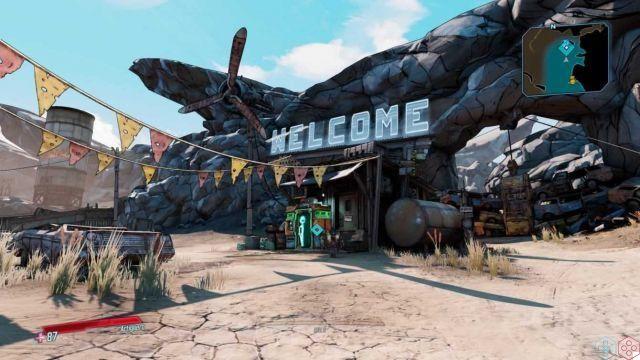 Oh, I am finally reborn and I took my revenge on this beggar. Hi guys, I'm the first editor who started the article. Thanks to the money set aside during work I am reborn and I took my revenge. Let's see where my distinguished colleague was left. Ah yes, he was talking about the benefits of multiplayer and single player. Well, weapons are certainly a great reason, but even better is having all that money that allows you to be reborn and keep fighting and raiding. By the way, I'm taking this purple submachine gun.

Guys what to say. You have never seen graphics like this in your life! Yes, ok, it is similar to the previous one as models, perhaps with some photocopied designs and textures from the second chapter, but you want to put with the qualities that the developers have managed to bring out? Look at me for example and look at what a nice pistol I have now in my hand. Okay, this one turned out badly… I didn't mean that, you know.

All this graphic quality though, it seems to me slightly heavy. My PlayStation 4 Slim doesn't charge it right away. This makes me think maybe the game is a little big and heavy for this poor hardware now almost retired. Who cares. We wait two seconds and once ready we can proceed. We wait… we wait… but do you want to move? Oh, you've finally decided to upload textures. I didn't know if that was a chest or a toilet. Well and now we travel. I do not believe it. Yet another loading of the landscape... 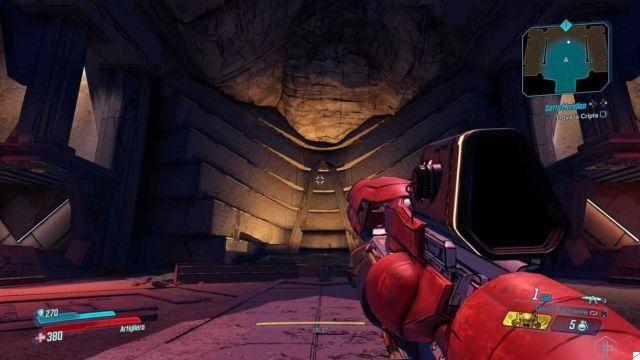 We load the speech on audio and commands - Borderlands 3 Review

Oh, finally something that works well. This music so engaging, how can you resist the urge to shout "Geronimo" and catapult into the fight? And feel these bullets fired from my assault rifle. Pure and simple lead melody. Nothing better to relax your nerves.

Am I responsive? I am much more than responsive. How could I not be otherwise with one fighting speed so frenetic. You give me the inputs and I will execute my moves at the right time. We will be an unbeatable team, you will see. Too bad about the driving system. As you well know, I don't have a driving license and it shows. Furthermore I can't aim and drive at the same time with the same command. Try steering and aiming with one steering wheel if you can!

What the heck are you doing on my computer? - Borderlands 3 review

Get out of here now. Little cheap editors, always ready to steal other people's work. But look at that crap review on Borderlands 3, no one will have understood anything. Now I'll take care of it. As my dear colleagues have already tried to explain, the new title developed by Gearbox Software it does not differ much from the previous chapters. On the contrary, it follows the right path, expanding it even more with frantic and chaotic combat. 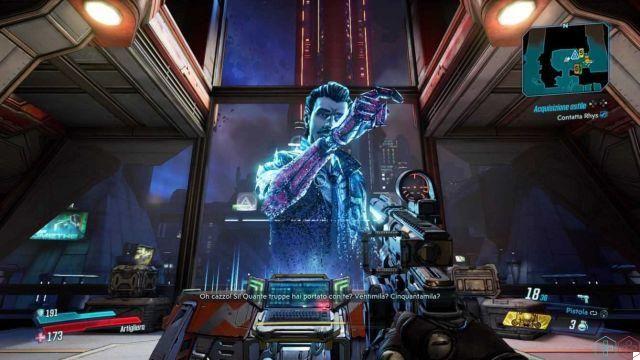 We will not always be able to progress quickly. The enemies will be numerous and well armed and we will almost always end up with a level not suited to the situation. The mechanics are almost the same as the previous chapters and actually there are few new ones. The difference is mainly made up of ability to travel between various planets and not just on Pandora. The first problems arise from some bugs in the missions that will force us to start over from the previous checkpoint (luckily they were only 2-3).

Other small problems arise from the immense amount of textures and maps that are needed to make everything possible. Uploads will be slow, especially those of the textures of the models (at least on PlayStation 4 Slim, the platform we tested). Contrary this gives a good amount of hours of gameplay, especially if in single player. Considerable variety is also noticeable in the bosses and mini bosses, each characterized by countless qualities and skills. Surviving won't be easy even on the easiest level. You will have to use good tactics, but most of all select your skills sparingly.

In short, for this review on Borderlands 3, that's all. We remind you that the game is available for PlayStation 4, Xbox One and PC (exclusively on Epic Game Store). I refer you to ours guide to choosing the character in this euphoric title of Gearbox Software and I invite you to stay on our pages of techigames!

Boss! Here we have to eliminate these two half cartridges from the editorial office. They ruined a potential masterpiece again.

add a comment of Review Borderlands 3: gotta kill’em all!