With Animal Crossing: New Horizons, the Nintendo pet franchise reaches its personal peak, running for the best chapter of the series; let's find out in our review

Seven years have passed since that Animal Crossing: New Leaf that arrived just in time to revive the sales of Nintendo 3DS. Nintendo Switch is a console that has never needed to increase sales, having sold out immediately. Yet, when it came on the market three years ago, many bought it precisely in view of Animal Crossing: New Horizons.

At that time it was not yet known that the game in question, of which you can read the review for Nintendo Switch today, would be called Animal Crossing: New Horizons, it's obvious. But no one doubted that sooner or later Nintendo would return to work on the series, a big absent on Wii U. Some say that the wait usually pays off: a proverb never been more true.

We spent a whole week in the company of Animal Crossing: New Horizons: it's time for the final verdict. And if you want, also take a look at the tips and tricks of the editors.

If you part with Nook Inc

Animal Crossing: New Horizons, like all other chapters in the franchise, doesn't have a proper one plot. But there is still a minimum narrative thread, an event that starts the whole operation and the new life of the protagonist, which can be lived as the player believes best. Tom nook, the raccoon already seen in all the other episodes, has inaugurated his very personal travel company, the Nook Inc. And he sells the Dweller a one-way ticket for the vacation of his dreams, a new life on an island with an uncontaminated life: here he can set up his own tent and dedicate himself to his favorite activities, without any restrictions whatsoever.


Soon, of course, the Animal Crossing: New Horizons player is offered everything a number of additional possibilities, which constitute the actual progression of the title on Nintendo Switch. Is the tent too small? You can build a house. Does the service center have limited possibilities after all? Well: it will develop into a shop and a small "municipality" on the island. Initially there are only two inhabitants: few; as other tents are placed or as small animals encountered around (on other islands that can be visited) are invited, they will also be able to move to the main one.

The possibilities of Animal Crossing: New Horizons they are almost infiniteWhether you want to hunt insects, fish, cultivate flowers or simply take a walk in nature and go back to sleep in your tent, the choice will be yours. You can expand and enhance everything, or do absolutely none of this.

You can play alone offline, or online with up to eight friends at the same time (significant enhancement for the multiplayer of the series). And much more, of course. But calmly: the possibilities of Animal Crossing: New Horizons are discovered little by little, and after certain days of real life have passed. 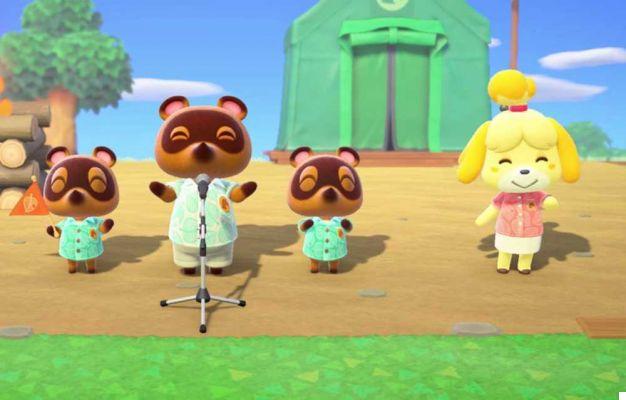 The biggest news of Animal Crossing: New Horizons is the new system of crafting, of which there was only previous experience in Animal Crossing Pocket Camp for mobile devices. In this chapter of the series, the player can still purchase the main useful tools at the store Marco and Mirco (net, fishing rod, slingshot, shovel, and so on) or, preferably, create them yourself. The second option is also the most convenient, because the tools in the shop cost a lot and most importantly they often break.


Crafted ones also break, of course, but at least they haven't been paid for. The simpler versions require, for example, twigs that can be obtained simply by shaking the trees, at most an ax pretends to find a small rock. All of these materials are generated every day within the main island, and are obtainable thanks to its natural resources: the gray stones to be hit with the shovel provide rocks, minerals, precious stones and clay, the trees affected by the ax soft, normal and hard wood, the trees shaken twigs, e much more.

The tools can be upgraded to become more resilient and effective, but the number of resources required in these cases increases; there are no too strict limits, it is enough to have a workbench close at hand. As with the main game tools, any other object can also be created "from scratch" by the player, as long as they have the unique blueprint.

The schemes they are bought from Tom Nook, Marco and Mirco, they are found randomly in the village, they are obtained as a gift from the inhabitants, and in many other ways: it will take a very long time to complete the diagrams notebook. Every single detail we've talked to you about so far and we're going to tell you is an additional point to the longevity of the game on Nintendo Switch, if you don't understand. 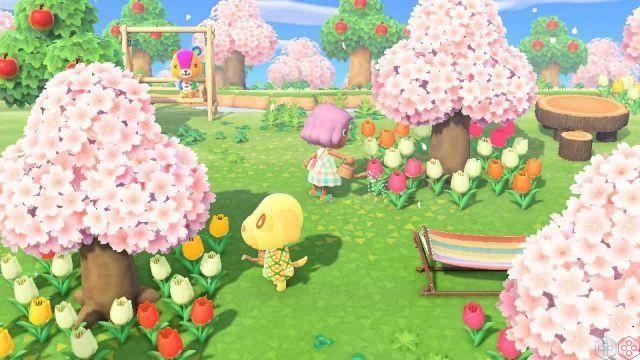 Another very important novelty of Animal Crossing: New Horizons is the presence of the Nook Phone, which effectively replaces the main game menu. It is a small device completely identical to a smartphone in the real world: it is given to the player by Toom Nook as soon as he arrives on the island, and then it can be gradually enhanced with a series of applications. There is one to check out the fish and insect collection, one for the blueprints we have, one for in-game chat and friends list, and again, again, again.

The most important app is perhaps the one dedicated to Nook miles, a new in-game currency that joins the Little stars (main currency with which to buy anything). Nook Miles are the result of Nintendo's conception of game Trophies / Achievements: points that are obtained by completing actions that are now simple and now complex, and can be spent to obtain a whole series of objects, applications and additional possibilities.

Let's take an example: by cutting down five trees on the same day, or by harvesting fruit, you will get 300 Nook Miles. These miles can then be used to shop at Tom Nook (from the Stellomat), obtaining new items. It is a virtuous circle which provides incentives to get back to playing every day. 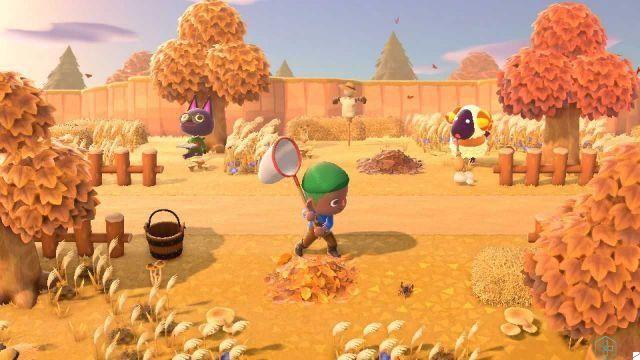 The Nook Miles we just told you about are spent mainly to buy the Miles ticket, with which it is possible travel to different islands for a short period of time. Your main island is always there to await your return, but in the meantime with each ticket you can visit a new place full of objects, animals and sometimes unpublished fish.

Some species are not found in your village, for example, but only on the uninhabited islands; and in any case you can plunder them as you prefer, or take the flowers there. The rarest island to find (travel management is random) is that of tarantulas: with a single trip you could accumulate up to 200.000 stars.

Animal Crossing: New Horizons special characters are the ones you have already come to know in the other main chapters of the series, with some news. For example Nella, the turnip seller who arrives on Sunday morning, has given way to granddaughter; and so also Castor and the Chameleon who managed the fishing and insect tournaments respectively, replaced by new characters.

Ma Fifonio, the Easter Bunny, Gulliver, Sahara and company all return, some just for seasonal events, others randomly every new day. Don't forget to talk to them, because they will reward you with very interesting prizes, once you have completed their respective missions (or after having shelled out a fair number of Stars). 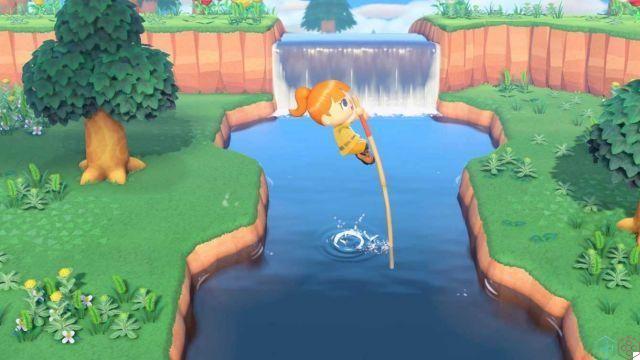 Animal Crossing: New Horizons is one splendor to see on Nintendo Switch, with a outstanding graphics and an attention to detail that surpasses even what Nintendo has accustomed us to in recent years. The sound of the rustling of leaves in the trees, the care of the movement of objects in the wind, the jingles and finally the accompaniment to the tactile feedback of the HD Rumble are simply excellent. Just as excellent is the technical sector, without ever slowing down and very fast loading in any situation. 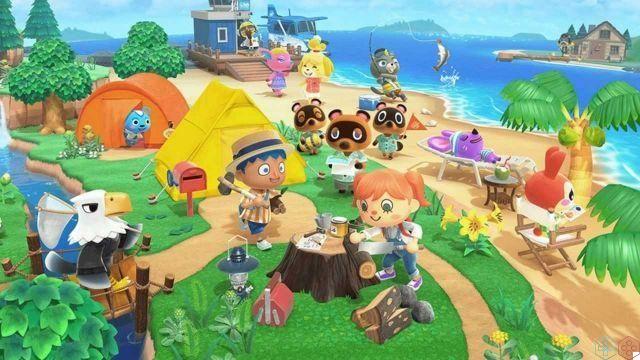 We link the closing of the review to its opening. Animal Crossing: New Horizons is the best chapter of the series, and a simply unmissable title on Nintendo Switch, also by virtue of its being suitable for everyone, and of presenting an incredible longevity, even for lovers of the genre. The novelties of the chapter and the richness of its contents raise it above New Leaf: every single innovative idea is well managed, and adapts and integrates harmoniously to all those already present.

The only note that could be made is related to lack of minigames, which however did not represent a leading element even in the previous titles of the franchise. With exceptional graphics and art direction, applauding attention to detail, and endless never-jarring gameplay possibilities, Animal Crossing: New Horizons it will hardly be surpassed in the next few years by a new chapter. And yet we hope it will happen, sooner or later: because we can't wait to find out how much more Animal Crossing is able to renew itself, and to try new paths.

Stay tuned to techigames for all the news from the gaming world and beyond!

9.5 An unmissable title on Nintendo Switch!