Getting lost in vices and facing the Last Judgment has never been easier, just read the review of 7 - The Sins

Letting go and indulging in the seven deadly sins has never been so pleasant and… fun! With its dark hues and captivating illustrations, 7 - The Sins is one of the most intriguing games of recent times. The goal of the game is to make the highest score by accumulating the various types of sins trying to maintain a balance between them, without exceeding too much or totally ignoring some of them.

The game is mostly made up of cards, with the exception of 10 Gems of Forgiveness. The cards are divided into:

First of all you have to divide the Capital Sin cards into seven categories and from these you have to select:

Those chosen will be the categories that you will use during the game, the unused categories you can put them in the box. Once this is done, take the capital sin cards you have chosen and divide them into three groups, according to their backs. As you can see in the photo below, all the cards have a 7 on the back which can be of three different shades, this indicates the three levels of hell. Starting with the first card on the left, the levels are simply the following: Inferno I, Inferno II and Inferno III. 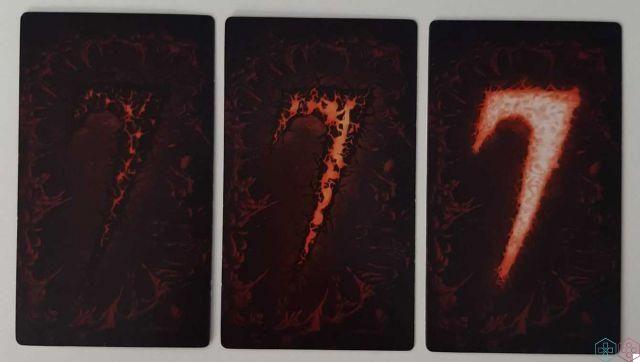 Once this is done, each player takes a Scoring card and a card with the Inferno I back, the latter must look at it and keep it face down in front of him without showing it to anyone else, while the Scoring card is used from the blue side. Then, again from the same deck, take the top five cards and place them face up in the center of the table, one next to the other. Once you have performed the actions described above, divide the remaining cards into the three levels of Hell and add the corresponding Doomsday card to each deck and shuffle the three decks separately. Then place the three decks on top of each other to make them a single deck (you don't have to mix them together!) In the following order: first the Inferno III cards, on top put the Inferno II cards and finally place the Inferno I cards so that they are on top of the deck. Finally, place the Abyss of Soul board on the table and next to it a certain number of Gems of Forgiveness based on the number of players present at the table:

Once the setup is prepared, you are ready to face Hell!

Course of the game | Review 7 - The Sins

In this game, the turns take place counterclockwise. During their turn, each player can perform one of the following actions:

Once you have placed the cards in your supply or on the Abyss board you can no longer review them during the game, but you must keep everything in mind. The cards will be turned face up again at the end of the game for scoring. At the end of the turn you have to turn from the central deck the same number of cards that you have drawn and place it face up in the center of the table to bring the number of cards face up to five, at this point the turn is passed to the next player. It is inevitable that sooner or later the Last Judgment cards will be turned and these cannot be drawn, but they must simply remain in the center of the table because their task is to progressively reduce the number of Capital Sin cards that are available to the players.

The game ends at the exact moment in which the third Last Judgment card is placed in the center of the table, there is no further rounds. The players must divide the cards in their supply by category of sin and the same must be done with the cards present on the Abyss of the Soul board. First of all you need to count the points of the cards on the Abyss board and add them together, based on this score you can then determine the winner. Each category must be counted on its own and then the points must be added together, the following table must be followed: 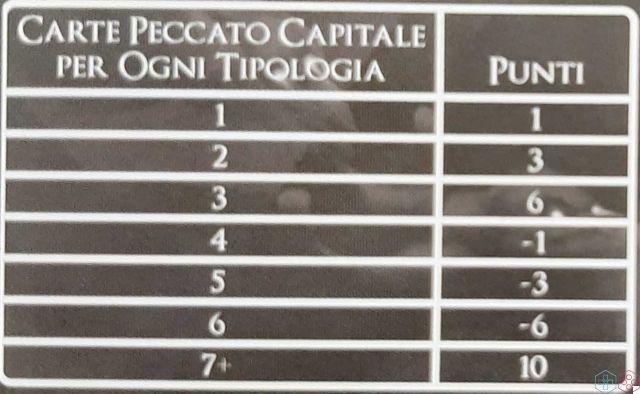 If the sum total points of the Abyss of the Soul is greater than 7, vince who has scored the most points, while if the sum è less than 7, vince who scored fewer points. In case of a tie, whoever has the most cards wins, if the tie persists then the victory is shared. For count the players' points we must always follow the table in the photo above, but before adding the score of all the categories, the players must perform another action, that is, they must place the Gems of Forgiveness they have obtained during the game. A maximum of one Gem per type of sin must be placed and it is considered as one more card. Excess Gems are discarded. In the photo below an example of how the score is calculated. 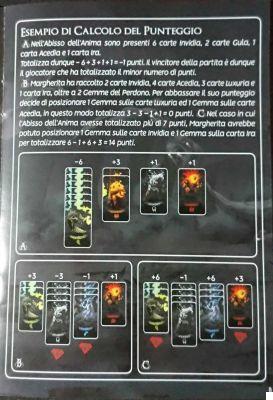 In advanced mode, the seven Penitenziagite cards must be added to the game. The differences from the basic version are as follows:

These cards allow everyone to do the same number of turns. In fact, after the third Last Judgment card is revealed, the game continues until the player to the left of the first takes his turn. For the rest, the other setup settings, the card taking methods and the points counting remain the same as in the basic version.

7 - The Sins is a game that keeps the tension high until the end, the game is always played on a tightrope. If the players have a good memory then it can be a very strategic game, but if you have a hard time keeping in mind which cards you have in your deck and which ones have been discarded into the Abyss of the Soul, then it's best to try to grab yourself. as many Gems as possible to play everything with the final score, even if this last "strategy" does not guarantee victory. The biggest flaw of this game is the advanced mode which I don't find adds anything exciting to the games, it simply allows everyone to play the same number of rounds and improve their score.

add a comment of Review 7 - The Sins: what sin are you?