If we talk about retrogaming and great classics, without paying too much attention to the rankings, Super Mario Bros. is certainly always in the Top Ten of the hearts of fans

Released into the land of the Rising Sun. in 1985, practically retrogaming for all intents and purposes, it didn't take long for that Super Mario Bros. conquer the whole world with high leaps, collected coins, defeated enemies and a saved princess to crown his enterprise. A title that of the good plumber who, although it was not his first appearance, represented the turning point by making sure that his saga became one of the most iconic of the whole Nintendo house together with that of Kirby, Legend of Zelda, Donkey Kong, Mega Man and so on, also raising a market in crisis for the infamous “Atari Shock”.

Directed and created by the good Shigeru Miyamoto, the game is also supported by music by composer Kōji Kondō who curated the iconic theme of this 2D adventure. An artist who, with his sound intuitions, made the title reach a blockbuster by entering the ears as well as the homes of players scattered around the globe.

In addition, the soundtrack for the mustachioed plumber's 3D adventure on Nintendo 64 and also that of the first The Legend of Zelda on NES. And this is just to name two of the most famous ones! Once this is said we too leave for the Mushroom Kingdom trying to understand the success of such an iconic game and discover some more curiosities. 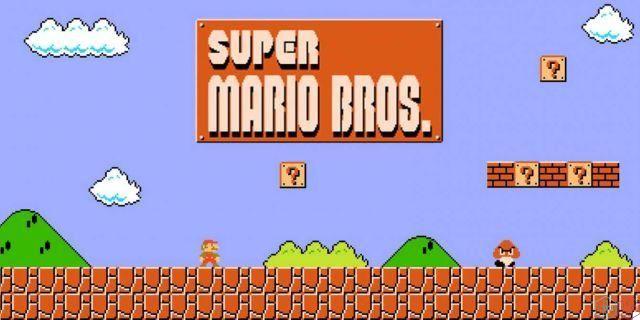 The first appearance of the Nintendo flagship takes place in 1981 inside the cabinet, later also extended to the consoles, of Donkey Kong. Here, however, was a carpenter named Jumpman intent on saving his girlfriend Pauline (who we will see again in Odyssey) from the clutches of the gigantic ape who will throw barrels at full blast. If it seems like something you've already seen, don't worry because this game was initially supposed to be a title inspired by the adventures of the strongman Arm wrestling, but the project did not go through.


However, the occasion was propitious to deepen the character of the carpenter and slightly modify him by giving him a brother (the good Luigi) in the title of 1983 previous to this one of the special. THE two "Mario brothers" they will venture into New York sewers where they will have to deal with enemies such as turtles (not ninja), crabs, moths and so on.

It was not yet as we see it today, therefore, but both of these titles caused the character to grow and develop further over the years. Also, as the colorful Koopa Troopas testify, many ideas have been kept and improved. If you want to try these historical titles again, you can find them practically everywhere and even on the NES mini. 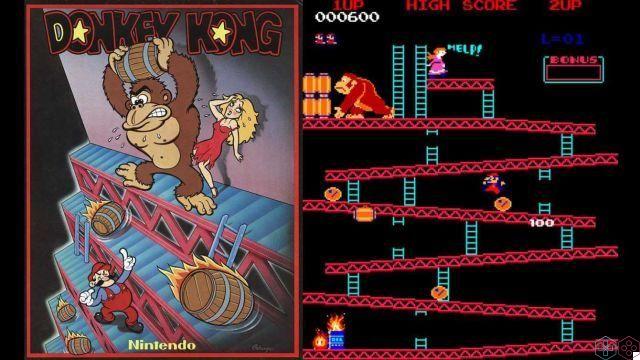 Like Pac - Man, also in this case we are faced with one of the best known videogame titles ever, even for those who "don't chew video games" so I will try to do just a quick review just for completeness of information. In this case, I believe it is very legitimate to quote directly the American translation of the instruction manual which, in turn, faithfully reproduces the Japanese one.

Obviously who will have to solve the thorny situation? To our mustachioed plumber, of course, and it will repeat itself in later chapters including a more "holiday" title like Sunshine. In short, there is never rest for our hero! Returning to us, also in this title appears the brother Luigi and you can use it when playing with two (not at the same time). It basically has the same sprites and animations as its only brother who is green, but its uniqueness will be seen throughout other titles like Luigi's Mansion. 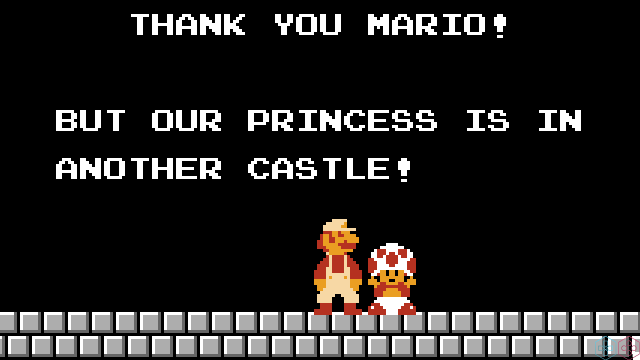 Those who are struggling with his first time on the screen are just there Princess Peach and drago Bowser. Obviously the real version of both characters can only be reached at the end of the game because all the other Bowsers are fake and after defeating them you will find yourself in front of them. Toad who will tell us “but our princess is in another castle”. Sometimes it happens, but this is life, here obtainable with a hundred coins or with the appropriate mushroom, as a well-known film by Aldo, Giovanni and Giacomo would say.

Among other characters that will have to be faced along the tortuous path there will then be Goomba, Koopa Troopa, Lakitu, Martelkoopa, Nella, Pallottolo Bill, Koopistrice, Calamako, Piranha Plant and many others in one "Primordial" 8-bit version. All elements that will then return, like the power ups, in the following chapters and in the spin offs of the very successful series.

As for the game mode, it is soon said. In this platformer, where for the first time you will see the landscape change as you go, you will have to make your way through the aforementioned enemies until you reach the flag to write the word "finish" on the level. Every four worlds will then need to be face the Bowser on duty making him fall into the lava, he will have to cut the bridge with the ax behind him, or hit him several times with the Flower of Fire. 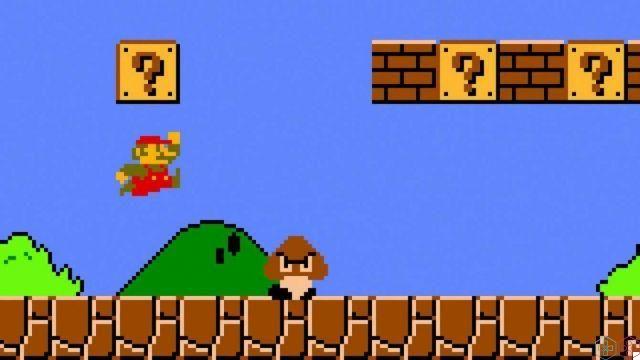 A journey between consoles and versions - Retrogaming: Super Mario Bros.

Originally landed on the NES, where the MMC processor - 1 to get the game going, the title saw an expansion on virtually all Nintendo consoles, including those portable, yesterday and today. In fact, together with Link's adventures, those of the famous plumber and his nice friends are always among the most awaited by fans every year.

We also remember that, in the Eighties, the title was sold in a bundle containing also Duck Hunt with his gun Zapper to hit the targets on the screen. In Spain, then, the commercial for this product featured a "very shaven" Jovanotti struggling with a game just as a girl came to visit him.

However, after the legendary NES, the other consoles that saw the adventures of our favorite inhabitant of the Mushroom Kingdom were the Famicom Disk System, the SNES, including the mini, the Nintendo 64, the Game Cube, the Wii, the Wii U, all kinds of Game Boy, the Nintendo 3DS, the Game & Watch, the smartphone and even the digital versions. In short, there really is something for all tastes and budgets! 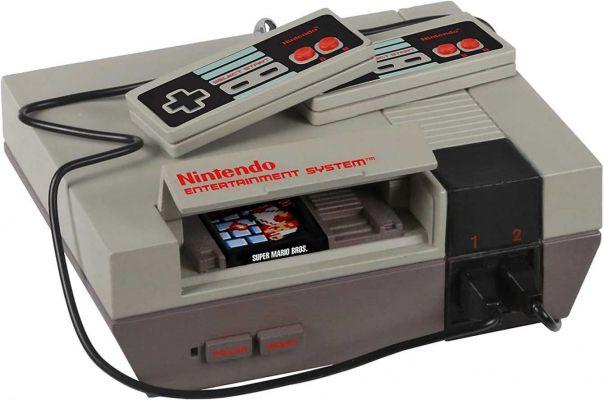 The most obvious thing when a game like this is successful is to create a sequel and that's how, always in 1988, i chapters two and three and Lost Levels had already come out in 1986. If the second had as its basis the platform Doki Doki Panic, where all playable characters would have their own special abilities, the third chapter however, it remains one of the most loved by fans of the series. It should also be remembered that both the first and the third were more than abundantly mentioned in the film The great little wizard of videogames (1989) which, at the end of the fair, was nothing more than a huge advertisement for Nintendo products including the curious Power glove.

However, if the sequels are known to everyone, it must also be said that even in this case the first loves are never forgotten. If you go through the catalog of the Wii or the 3DS a bit, or look carefully at the next episodes of the saga, you will always notice how the chapter of 1985 returns often and willingly. Speaking of looking, it should be remembered that, in the 1986, was produced on first animated feature film dedicated to the debut chapter while, in 1991, it was the turn of the animated series based on the adventures playable on the SNES. Then, of course, one should mention the disastrous 1993 film of the same name, but that's another (bad) story.

For completeness of information it should also be noted that, from the dirtiest meanders of the Internet, they then popped up too a couple of red light versions, but as the Latins used to say “de gustobus non est disputandum”. Luckily we can see it again in other versions, more or less funny or particular, in animated series like i Griffin, in video on YouTube (watch the Nukazooka channel if you have time), board games, even cakes, T-shirts, merchandise various and so on. Virtually a success comparable to that of Beatles in the musical field. 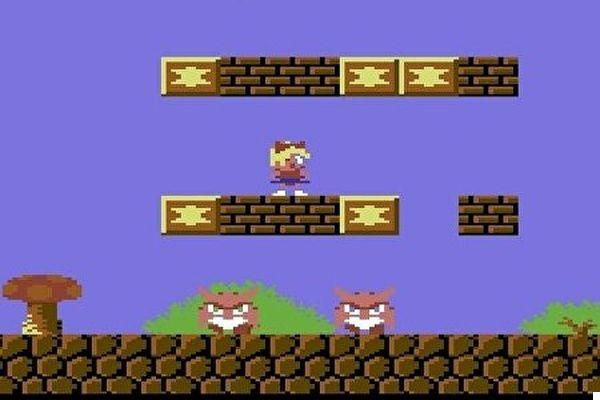 Returning to bob - omb on video games it is undeniable how such a title has heavily influenced future "rival" characters, just think of Sir Daniel Fortesque of MediEvil, Crash Bandicoot the Spyro dragon and the fact that this importance has also been commended by the Daily Telegraph, but also copies and blatant plagiarism. If you look at the market for free to play mobile games, you will realize it very quickly, but the step longer than the leg was taken in the late XNUMXs by a German software house.

Rainbow Arts, in 1987, created a game with the title The Great Giana Sisters for platforms such as the Atari ST, the Commodore 64 or the Amiga. The problem was that it was one blatant copy adventure created by Nintendo so much so that mechanics, enemies and even levels differed very little from the worlds created by Miyamoto.

This caused Nintendo to threaten Rainbow Arts with a lawsuit for plagiarism, and the latter, seeing itself cornered, withdrew the game shortly after its release. This then He also stopped them during the sequel, initially it should have been called Giana 2: Arther and Martha in Future World, who was baptized Hard’n’Heavy and the protagonists replaced by a pair of robot. 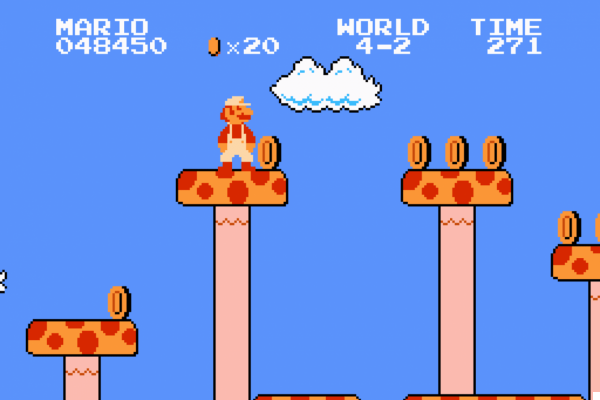 In conclusion, how long it has been, still today our good old Super Mario Bros. it always shines within that vast Olympus which is retrogaming together with the heroes and enemies of all time. Also, although it was relatively "simple" in mechanics and content, even if small tricks like extra lives or Warp Zones deserve more than a separate article, I must say that replaying the original adventure whenever possible on Game Boy Color or NES mini is always a real blast from the past. A dive of which, personally, you hardly ever get tired and each new game can reveal a different detail or an alternative way to finish the level. An essential title for players of all times and ages!

Anyway, if you want to take a look at hers adventures in search of Princess Peach or to the various spin-off al right price, click here, while, to stay up to date on the video games of yesterday and today, we are always waiting for you here on techigames!

Retrogaming: a journey into the past with the SNES mini ❯