Go around, offend people, explore, enjoy easter eggs and do missions. Is it the new GTA? No, it's another appointment with retrogaming and with Postal 2

After the graphic adventures of Guybrush Threepwood, the colorful worlds of Super Mario 64 and the darker and noir atmospheres of Max Payne, let's go back to dealing with retrogaming, but not with 8 or 16 bit titles, much less politically correct, therefore the curtain rises for Postal 2. Game of which I had seen the developments between middle school and high school, we are talking about a title that dates back to early XNUMXs, and who had not failed to make people talk about themselves given the extremely violent and goliardic contents.

That was also the period of Grand Theft Auto III, the first non-top view version, of Quake III Arena, Wolfenstein, the first ignorant adventures of Serious Sam and a growing media attention towards video games and violence. The world was in fact still "fresh" from the Columbine High School tragedy, the film Elephant by Gus Van Sant and the documentary Bowling a Columbine by Michael Moore, and video games were targeted and pointed to as the root cause of violence in schools and among the youngest.

But we are not here to discuss a treatise on sociology, a subject in which there is no lack of studies on violence and aggression like that of Albert Bandura, but one of the leading products of the American company Running with Scissors. But no more chatter and let's see what the game is about! 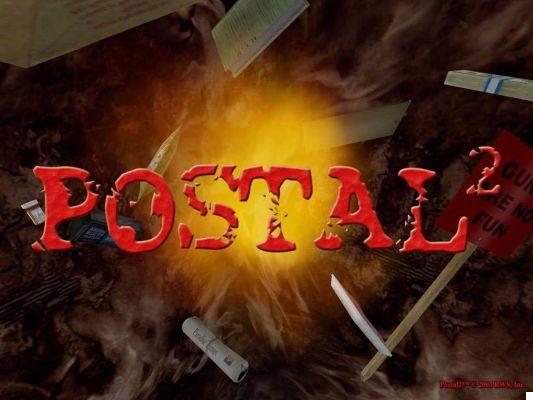 Running with scissors in hand

La Running with Scissors, a company that is openly mentioned in the game, is therefore famous for having published the entire saga in question. In fact, our today's title for the retrogaming column, Postal 2, was published in 2003 su PC. Differentiating from its previous chapter for the first person view instead of third (for this and for the contents it could be compared to the recent Hatred) Postal 2 remains one of the most loved chapters by fans. Postal 4: No Regerts has recently been released. No, there is no typo, it is written like this and is currently being updated (among the latest you can see the citizens with mask due to the Covid pandemic - 19).


Postal 2 has then had a series of expansions that have not failed to immerse themselves even more in that crazy and violent world while awaiting the third chapter (2011). Among these are Share the Pain, Apocalypse Weekend, Corkscrew Rules! e Paradise Lost (not the English band), in short, a name that is all a program! In order not to overly stretch the stock, I will try to talk only about the main game by limiting the citations to the expansions that remain, even today, all to be played for lovers of nonsenseand goliardia and of that freedom, in every sense, that emanated from the creations on horseback between the XNUMXs and XNUMXs "Powered" byUnreal Engine. 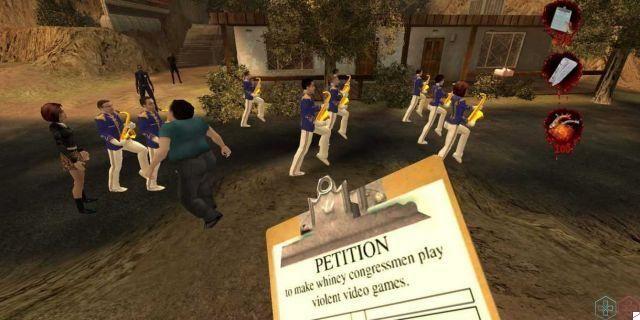 In that gem of politically incorrect e retrogaming which is Postal 2, hear hear, there is even a semblance of plot to make players better understand the context and the actions to be taken. First of all, let's start by saying that we are in the charming town of Paradise. A place that is perfect mix between slum, suburban American town, commercial activities of dubious taste and nihilistic citizens among which we also find our protagonist. He doesn't have a name, he just is Postal Dude, and it can be recognized by the leather raincoat, the red hair, the goatee, the shirt with the alien and an unparalleled cynicism combined with a pungent gab and a certain predilection for massacre.

After a level selection in full "Wolfenstein" style, with names ranging from Liebermode to Impossible via Hestonworld and They Hate Me, our game scenario opens up. Rather shabby I would say since you start from a camper where there wife of Postal Dude, we will never see it and it will simply be called The Bitch, shouts of errands to do and theirs dog Champ urine quiet for the courtyard before getting hit by a football. 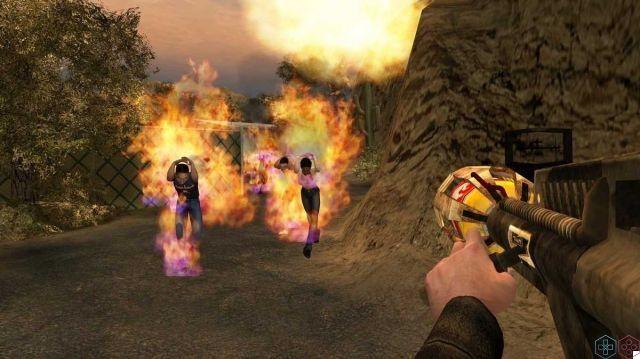 La history is set during a classic working week from Monday to Friday (in the expansions we also face the weekend) with the usual errands such as, for example, buying milk, collecting the salary, doing the analyzes in the hospital, going to visit the deceased father at the cemetery, confessing one's sins, collect a package at the post office and so on. It might seem almost boring, the usual grind, but Postal Dude is no ordinary guy and Paradise is hardly a quiet little town Mountain. In fact, almost any commission can lead to the most violent result possible without forgetting the possibility of one vein of madness who decides to burst in the face of our protagonist like a balloon of blood.

In fact, you can choose between collecting the money to pay commissions, such as milk, or send everything to the devil and indulge in a quiet day of bullets and swearing various. Which, of course, will alert the police as in the various GTAs, but it will cause certain categories of citizens to shoot at us on sight. Among these are the activists against violence in video games, i terrorists Muslims, the inevitable redneck and so on.

Fortunately, there is no shortage of weapons and the world around ours scazzatissimo protagonist is fully explorable. Tools of death of all shapes and sizes, heals, body armor, ammunition, explosives and various bonuses are distributed throughout the buildings and hidden corners of Paradise. A real treasure hunt! 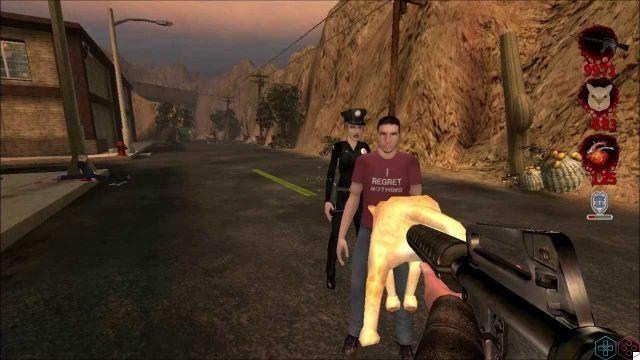 As in any good self-respecting Yankee film, here too the references to the Second Amendment which considers the right of citizens to bear arms to be "sacred". Not for nothing is it often mentioned in our protagonist's phrasebook and references are made to personalities such as Charlton Heston, US actor and former president of the National Rifle Association.

Others references do not fail to make fun, in a more or less veiled way, the fast food industry, religion, the actor Gary Coleman who also appears in the game, the defense of animals, the entertainment industry, the disease of mad cow, video game violence and, more broadly, general common sense. All then seasoned with the breaking of the fourth wall addressing directly to the player or programmers. In short, how can you not play with it?

Here I was, just enjoying my Second Amendment rights, and you people have to freak out on me!

I know what you’re thinking, but the funny thing is, I don’t even LIKE videogames…

You probably thought you weren’t goin’ to die today? Surprise!

But let's go back to weaponry, an unmissable element in the series ed only way to survive in Paradise. It starts with those easier absolutely, like shovels and punches, up to those more destructive and crazy like napalm and rockets.

Too trivial? No problem, let's fix it right away. Among the melee weapons the machete, which you can throw and catch like a boomerang, and the sickle with which you can "play" the Dark Reaper by gutting innocent passers-by. God, innocent up to a point since many are armed and will not hesitate to return fire. 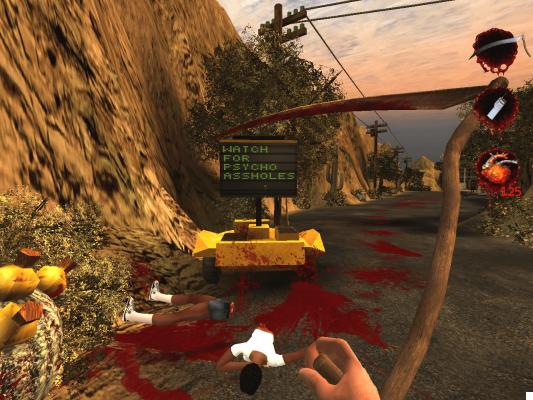 Furthermore, small spoiler, know that you may also find some very nice ones zombie on your way, but if you've already played Resident Evil, The Walking Dead or similar, you already know what to do! And if you don't want to lead your hands, you can also pull down the zip of your pants and urinate on people until they vomit and then, perhaps, finish them with shovels or with more conventional firearms such as pistols, submachine guns, shotguns and sniper rifles.

Also let's not forget the Garnet, the molotov bomb and even the petrol cans with which to start a fire. It is enough that any guy catches fire, but also a dog or a cat, and he will start to fidget and run around "turning on" even the unfortunate in his vicinity. Madness is at home at Running with Scissors and therefore you can vent your sadistic streak pulling scissors (it was not a random name then) o throwing a rotten cow head into the crowd which is practically a small portable bacteriological weapon.

Among the bonus to regain some energy and facilitate our "errands" there are also bags of fast food of dubious origin, junk food, classic medkits, dog food (it can also be used to make friends), crack pipes and even some small pads that slow down time. Perfect for when you are surrounded by enemies or want to quickly escape from the police.

Another point to look into is the animals. In addition to being the target of our ire, elephants included, they can become weapons themselves. See i dogs who follow us can defend us from incoming enemies, i cats can be mounted on rifles such as silencers only to be shot as one spinning top slicer. Not bad, right?

The use of all these elements combined together, plus others that you will see throughout the game, they will therefore produce a series of tearing, gutting and impairments, worthy of titles like Soldier of Fortune, and student spirit that brings to mind games like Duke Nukem. In short, to put it in French, ignorance in spades! 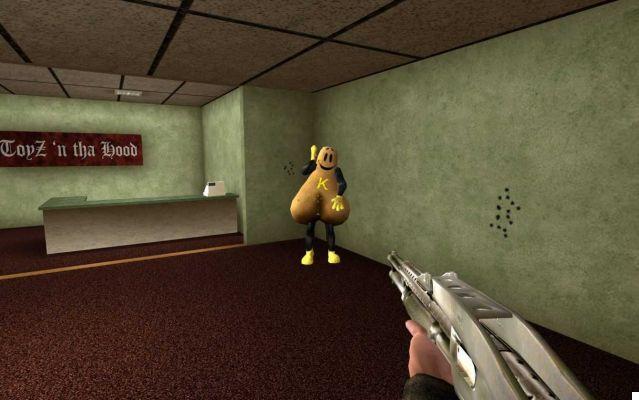 In addition to the already mentioned sequels and expansions the saga also saw one cinematographic transposition in the far" 2007. Unfortunately, it is well known and often saddened for this reason then that films based on video games have never been immeasurable masterpieces even if some series, such as Castlevania, represent a very lucky and very welcome exception.

The film in question was therefore shot by the former boxer Uwe Boll which has become known to most for having signed film transpositions of some videogame titles with little success, except for Razzie Awards. In fact, products such as House of the Dead, Alone in the Dark, BloodRayne, Far Cry and so on. 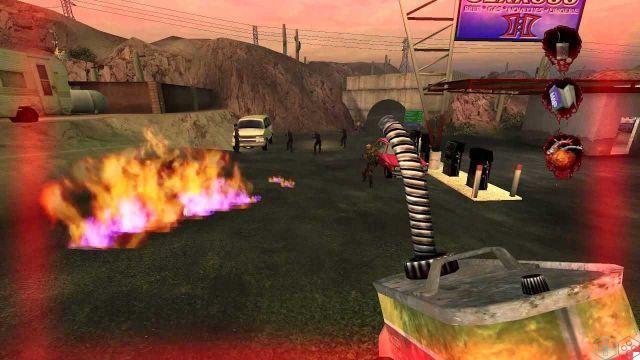 Apart from the cinematic parenthesis, Postal 2 however, it remains one of those retrogaming titles that, in these times of politically correct sometimes extreme, remains one banner of splatter, light heartedness and nonsense, reminding everyone that in any case it is a game and should be taken as such. If you ask those who have been lucky enough to play it for Postal 2, expect a good laugh when you think back to crazy moments spent in Paradise and surroundings.

A game that, even today after about twenty years, still has something to say and does it in the most personal way there is. That is to say, with foul language and a straight shovelful to the face. A dispassionate advice, get it back!

So if you want to relive the very violent adventures of Postal Dude at a low price, click here, while, to be always updated on video games of yesterday and today, stay on techigames. See you soon and keep an eye on the local grocery store.

Retrogaming: Back to childhood with Mickey Mania ❯

add a comment of Retrogaming: Postal 2, a crazy week