A forest, a swift movement, an elusive Mew and us, in another retrogaming adventure with Pokémon Snap for Nintendo 64

So let's continue to talk about retrogaming with one of the titles, strangely semi-unknown to most, dedicated to the most famous monsters in the world, Pokémon Snap! Made for dear old Nintendone, home of the timeless Super Mario 64, the title lands in Japanese stores in March of 1999 and then spread to the rest of the world between summer and autumn of the same year. A title that changes the cards a bit. If on the one hand we had a very toasty Pokémon Stadium where our heroes were made to fight in a turn-based 3D arena (practically we were going to expand the experience with the Game Boy making it more colorful) on the other there was a “pucciosissimo” Hey You, Pikachu! where you went to interact verbally, through the appropriate peripheral, with the brand's mascot.

Small digression, if a "sacrilegious" word like PlayStation was pronounced over the microphone, it seems that Pikachu didn't take it too well ending up getting sad or annoyed. Certainly, however, it was not over electrocuted like poor Ash in the cartoon, sorry, in the anime. Ah yes, then there was also the Nintendo 64 a forma di Pikachu, I still wake up at night screaming and drenched in sweat at the idea, but it was a time when people tried to squeeze and spread the Pokémon brand on anything that was entertaining for the little ones. But let's get back to us.

Speaking of anime, know that here of references and styles that recall the much acclaimed series there is one that reigns over everyone. To guide us in ours adventure for photographers, apparently there are not only coaches like Ash or breeders like Brok, the good old Professor Oak. But we talked more than enough, so grab your camera and something to eat because we are about to return to Satoshi Tajiri's world of creatures! 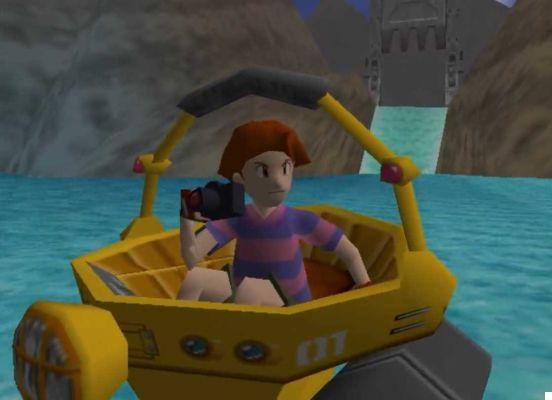 Are you ready to take some pictures?

La Pokémon Snap story, like some cornerstones of retrogaming such as the pieces of The Legend of Zelda, is quite simple and it is up to the player to live his personal adventure as he sees fit with his beloved pocket monsters. The protagonist we will be our story, a young Pokémon photographer determined to find the perfect shot armed with his faithful camera and a mezzo able to move on rails, in water and even in the air. Practically it will remind you of one of those sliding rides on tracks typical of Gardaland or other amusement parks.

In any case, to guide our company, Professor Oak will take care of it with useful tips, information, tools and indications on how to continue our adventure in search of the perfect pose. Besides, I already told you that it was a pretty simple story, right? The monsters to be photographed all belong to very first generation that all of us, at least once, have seen on television. Obviously it was not possible to enter all 151 due to the limitations of the console, in that case you would have had to opt for a lot more cartridges, but be aware that there are more than 60.

Among all these is of course including the elusive Mew seen in the initial animation screen, an omnipresent Pikachu in each level and many others such as Meow, Charmender, Ditto, Snorlax, Psyduck, Scyther, Goldeen, Lapras, Magikarp, Jigglypuff and Metapod just to name a few. Not to be forgotten are the legendary birds such as Zapdos (electricity), Moltres (fire) and Articuno (ice) each enclosed in respective giant egg. So how can you do to photograph them all? Let's continue reading together to understand it. 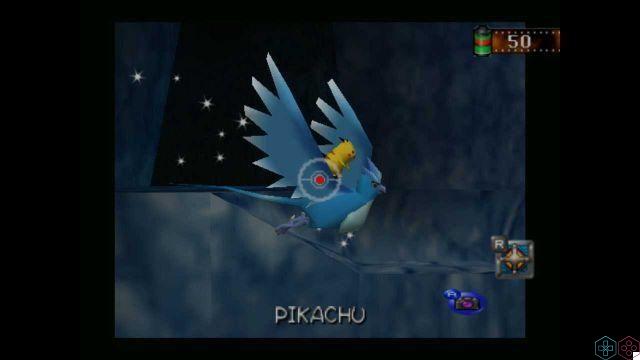 Unlike many other games of the era and iconic retro gaming titles, Pokémon Snap's adventure is much more relaxing and dedicated to another side of exploration. Since our photographic enterprise will take place on rails, it will not be possible to make changes to the route unless the alternative paths are unlocked, but we will come to this too. First of all, our scenario will be an island containing i different habitats (beach, river, cave, etc.) where we could see the different subjects to photograph and it will be necessary to make a given score and have collected the shot of different creatures to be able to discover others.

Furthermore, this accumulation of points will give us another advantage not just that is instruments. The first it will be one apple, similar to the Wumpa fruits of the mythical Crash Bandicoot, which will attract the friendly inhabitants of the various habitats to itself. In addition to this, you can also throw it on to trigger reactions or stun them for a moment. The secondinstead, it will be a kind of poke ball which will show the subjects hidden in the different environments and will also help to unleash a series of reactions to activate the buttons that open the gates to the secret paths!

Il third finally, the tool will be a flute which will be able to wake up and make the various Pokémon dance, among these the sleepy Snorlax must be mentioned, in order to make your shots even more unique! Furthermore, it must be said that it also exists a special accelerator for our means of transport. In this way you can chase some rather elusive subjects or reach the conclusion of the path more quickly if you have already taken all the necessary photos. 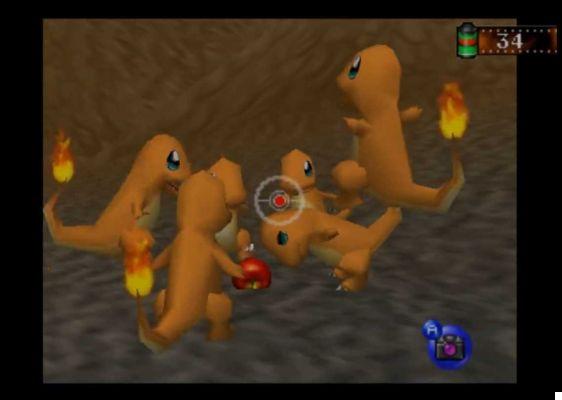 All this will have to be combined with our credit roll of 60 shots. But how exactly does each level / path work? It will therefore be necessary to select the desired habitat and set off in search of the perfect photographic set. On our rails, they will stand in front of us many different Pokémon, some of these will have to be attracted with the apple or the sphere, and our final goal will be, precisely, to photograph them all and reach the maximum possible score.

The score of each photo depends on three main factors which the size (the closer the better), the laying (better if engaged in a more dynamic action) and the technique (the subject must be in the center of the photo). Also, gods can be obtained additional points if the Pokémon will be engaged in more "epic" actions or poses, especially if they dance, eat or attack, if there is more than one of the same type, but all this will come decided by Professor Oak's expert eye at the end of the session.

At the end of each level, in fact, you will need to select a photo by type of Pokémon from your roll and submit it to judgment by Oak. Furthermore, as mentioned above, the combination of Pokémon types and score will give us theaccess to new routes. But not just creatures! Exactly, because there are also the landscapes themselves to be portrayed, but not simple rocks or rivers, but gods natural elements reminiscent of our favorite monsters. For example, in the valley, it is possible to glimpse the figure of a Giant Dugtrio in the mountains.

Others are hidden inside the various levels, there is one for each path, and if you can photograph them all, then, you will have access to the secret path. Maybe there you will finally be able to immortalize Mew? 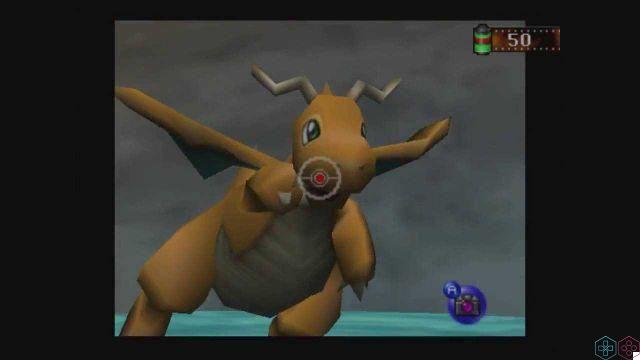 A game quite relaxing and peaceful, this is true, but always able to give a whole other aspect to that incredible world imagined by the good Satoshi Tajiri. A world filled with fantastic adventures, incredible stories and tons of creatures with their own abilities and weaknesses. This game has therefore given a greater depth to the adventures of Ash & Company bringing the more “naturalistic” side of Pokémon to the screen (to the delight of a super enthusiast like Brok) and making these creatures even more real. It practically seemed to touch them as they could be photographed and not just captured, almost like a photographic safari!

The particular feature of this spin off has therefore made the title one of the most purchased and rented (good times that of the Blockbuster) both in Japan in that America towards the end of the nineties. A move that made the use of the colorful characters of this franchise inevitable other Nintendo series such as, for example, Super Smash Bros. for Nintendo 64 with the participation of Pikachu e Jigglypuff. Basically the first title where the different characters from the Big N, from Link to Donkey Kong without forgetting Mario, they gave her a good reason and they still do today with the following chapters! 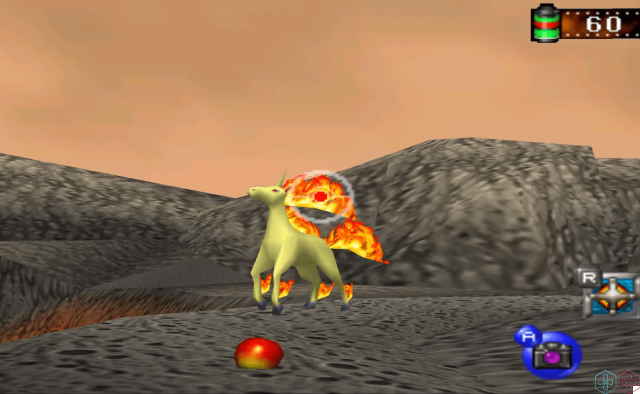 A title returned to light

Almost like a old photo album, now reported missing in a dusty attic, the title returned to light in the course of 2021 with its version for Nintendo Switch! A similar thing had already happened in 2007 e between 2016 and 2017, for remastered versions designed for Wii e Wii U. The success was not noteworthy, and certainly not at the level of that for the dear old Nintendone, but this Switch version already stands gathering a lot of support both among the longtime fans, who grew up with them, and among the new generation.

It has therefore been a long time from the first chapters to Game Boy, including that a colors and Advance, but certain emotions are never forgotten. Taking it back in hand, children automatically return to discover the world with a final goal! If you have the opportunity to get your hands on the original one you will not regret it, although it is quite short, but if you manage to get the version for Switch so much for the better.

In conclusion, if you like retrieve the other chapters major and spin-offs of the most famous pocket monsters in the world, click here to get them at the lowest possible price. Furthermore, for be always up to date on everything that revolves around the world of video games, both yesterday and today, then we are waiting for you here on techigames!

Retrogaming: Perfect Dark and the art of repetition ❯

add a comment of Retrogaming: passion for photography in Pokémon Snap