Palm trees, sun, beach, sea, Caribbean landscapes and the usual kidnapping of Princess Peach. It's another appointment with retrogaming and with Super Mario Sunshine

So continue our journey in the vast seas of retrogaming and, after the pirate adventures seen on The Curse of Monkey Island and the madness of Postal 2, it's time to analyze a calmer and more relaxing side of the beginning of the millennium. We are in 2002, a very short time ago the was released PlayStation 2 from Sony… and Nintendo? "Adapting" to the use of a memory card and a cd for the game, the Great N therefore released the Nintendo GameCube. A Dark purple “cube” which has brought a certain saving of space and ergonomics under the controller side, especially if you think about the "Cassone" that was the Nintendo 64 with its three-pointed "claw".

The legacy of the Grande N titles, both sports and classic ones combined with different ports such as Need for Speed ​​and Call of Duty, therefore remains unchanged and allows the company to face the new millennium on the right foot. Among all these titles, by now we can safely talk about retrogaming since about twenty years have passed, how could the most famous mustachioed plumber ever be missing? Exactly, he absolutely could not and Super Mario Sunshine is the perfect witness especially because he was signed by duo Shigeru Miyamoto e Takashi Tezuka.

The 3D adventures of our favorite mustache, direct sequel to the legendary Super Mario 64, together with old acquaintances and some new allies to better adapt, too, to different game mechanics. Who? Which? Because? Like? Don't worry, take your sunglasses and spread out your beach towel, because now we will find out together in this special on the retrogaming dedicated to Super Mario Sunshine. 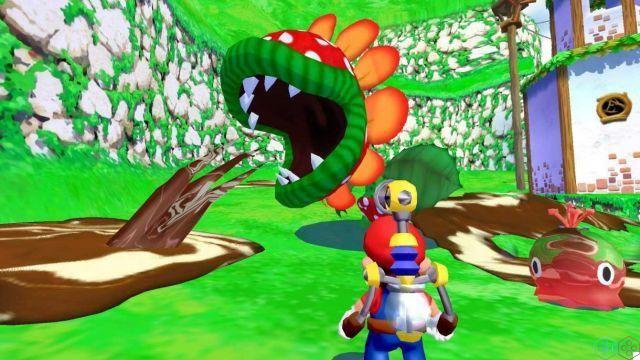 Are we all finally going on vacation, or maybe not?

Since our hero is a true retrogaming icon, even in Super Mario Sunshine he is more than natural take a nice vacation, after the many missions, the worlds explored and the enemies defeated, together with the Princess Peach and the various Toad. But things are never as simple as they may appear at first glance and, even on this occasion, it once again proves particularly true. While our party of heroes are flying to Delfina Island, Peach notices another weird Shadow Mario with a brush in his hand without anyone else seeing it.

The plane, however, lands, but is forced to a sharp turn to avoid a pool of strange colored mud and it is Mario who intervenes. After briefly getting to know the local inhabitants, the colorful and Caribbean Palmensia, Mario finds a strange high-tech object called Splac 3000. That object was built by Professor Strambic, we have already seen it in the Luigi's Mansion saga with the Poltergust 3000, and this will be our plumber's faithful ally throughout his adventure. It is indeed capable of shoot jets of water which can also be of help for the movement of our hero. 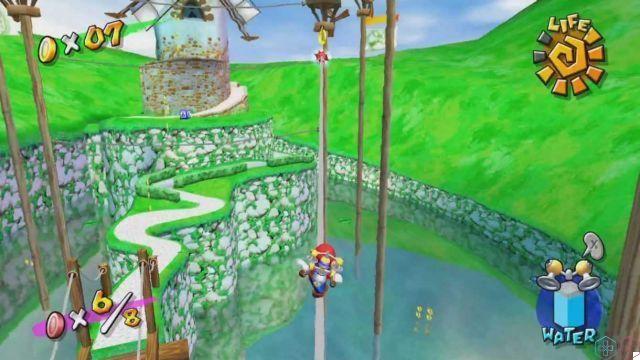 Very short tutorial on how to use and how to refill the Splac 3000 and our trusty plumber starts to attack the slime which, in the meantime, has released a giant Slime Piranha Plant. Defeated, however, two policemen arrive who put Mario in prison accusing him of having defiled the city and of having taken the Only Keepers, these will take the place of the known Stars.

As a condemnation, our hero and his new tool are assigned to "Socially useful jobs" cleaning up the whole island, but then we understand that the real enemy is Shadow Mario since he, in addition to reappearing, sowing panic in the city, will kidnap Princess Peach. From here, therefore, the Caribbean adventure of the good Mario starts in search of the Only Keepers, of his beloved and of the responsible (SPOILER then it turns out that it was all a plan of Bowser Jr. and Bowser) between dream landscapes, slime to clean up and inhabitants to save. In short, in a nutshell, the long-awaited holiday will have to wait a little longer. 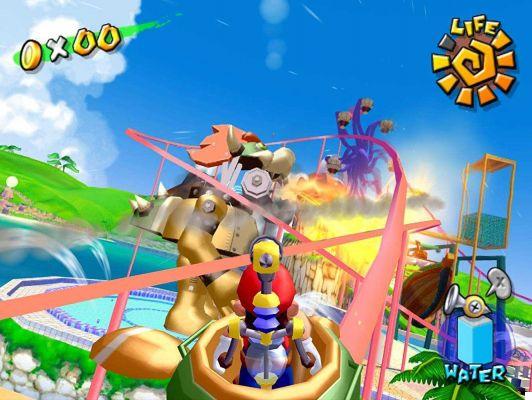 Unlike many other previous titles, in Super Mario Sunshine will use the Splac 3000 for almost the entire adventure to collect the keepers suns, blue stars, secrets and defeat the enemies. Like the previous Super Mario 64, here too you can move from one world to another through passages in the main one which, as the story progresses, will slowly change in appearance. Even the same levels will have to be explored several times because, with each Guardian Sun found, the main and secondary quests within them will increase.

It will be possible to find more secrets (retrieve more blue stars to buy more Suns) cleaned some passages, washed the various inhabitants pretty well and found some old acquaintances who will help us in the enterprise. In fact, among these there is the good old man Yoshi which will remain in its egg until we bring it the right fruit. Once this is done, we can jump on his back and reach inaccessible places, eat enemies or defeat them and find the entrance for other worlds by sprinkling the juice. Juice that, to be recharged, will need another fruit.


Another character is instead applause, a man disguised as Palmense, who will challenge us in running races taking the place of Koopa the Fast from Super Mario 64 and with a physiognomy very resembling some character of the saga of The Legend of Zelda (keep in mind that at that time The Wind Waker was released) as the athlete in Ocarina of Time and the postman in Majora's Mask. Anyway, back to talking about soaking enemies, a small parenthesis should be opened on the capabilities of the Splac 3000. 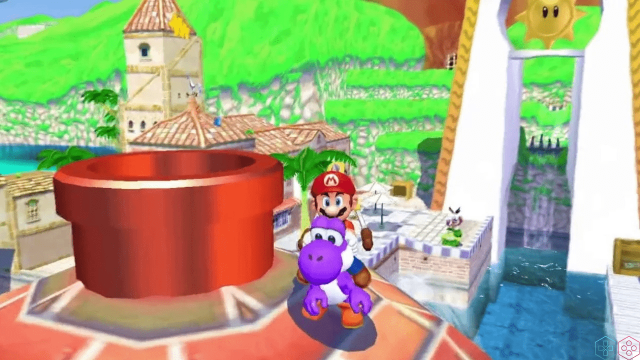 Initially it has only two modes, Spruzzatore and Spruzzoplano, but as the story progresses you will be able to unlock the others. The modality Sprayer allows you to attack and reveal secrets with some precision, but also by running or shooting while jumping. The movement variable is instead given by Spray-plane which allows you to reach the most inaccessible places without jumping floating in the air. With the Spruzzorazzo, on the other hand, you can shoot up, like a rocket, while, with the Turbo spray, you can start at full speed even going into the water. Yes, but to recharge it? You just need to find some water to fill up and also make a slide on the ground to reach your destination more quickly.

Cleaning up the levels and Delfina Island itself you will then find some secret worlds and stars so it is advisable to always take a ride using the Splac 3000. Then remember that you can buy a Guardian Sun every time you have collected the blue stars at the Delfina Island shop, run by a raccoon like Mr. Nook from Animal Crossing, so drop by whenever you can! Ah, and don't forget to help the inhabitants if they ask you for fruit or anything else, both in the levels and in Delfina Island, because There are blue stars and extra lives up for grabs!

So with the Splac 3000 it all seems pretty easy. There are no punches to attack so this is our only means but what if I told you that in some bonus levels the latter will be stolen from you by Mario Ombra? That's right, in those cases you will have to get to the Guardian Sun with your own strength and then bounce, triple jump, press on buttons, run and even a little luck. I can assure you that some of these levels will prove to be really difficult to complete. 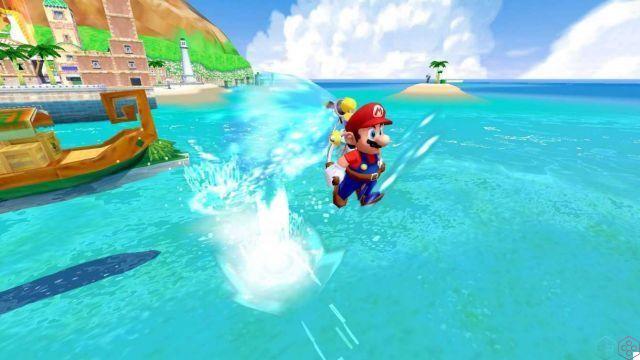 Mario's Caribbean adventure, as well as reliving on Super Mario 3D All-Stars together with Super Mario 64 and to the first Super Mario Galaxy, however, is resumed several times in the course of the titles signed by Nintendo. In fact, we can see the Palmensi and all the other funny creatures that populate the surroundings of Delfina Island as it whizzes at full speed on Mario Kart: Double Dash! or on Mario Kart DS. A nice way to review the beautiful landscapes and enjoy the Hawaii vacation soundtrack.

In a similar way you can do the same thing with your friends by going fishing in that great sea that is the many chapters of Mario Party with its mini games. And if you prefer a little more action then that's no problem. Indeed, on Super Smash Bros. Brawl., you can return to this tropical paradise to give your hands a bit and go wild with the most exciting combos and clashes. 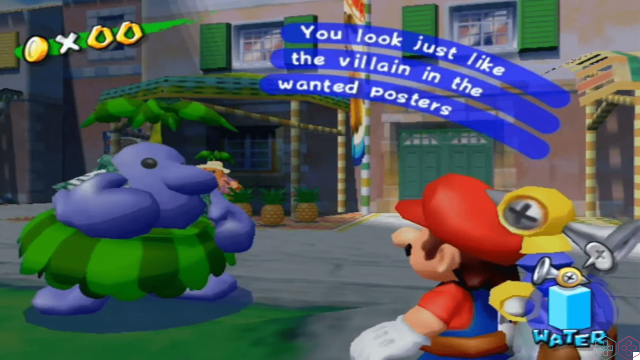 A title to carry under the umbrella

For its setting e colonna sonora, this adventure of our mustachioed hero is ideal to take with you on vacation if you have already bought it on Nintendo E-Shop on the occasion of Super Mario 3D All-Stars. A title that will immerse you in dream landscapes and will make you appreciate all the ways of using the Splac 3000 which, once you have the right familiarity, it will be almost impossible to think of passing certain levels without using it.

A title therefore more "marine" and slightly more different from traditional canons, like the one already mentioned The Legend of Zelda: The Wind Waker, which has divided the fans in some ways, but which seen today is still very pleased. A game that changes the cards on the table and transports us to a distant, colorful and relaxing Caribbean island, all to be discovered and rediscovered. making us detach our mind a little from some bad situations as current as the pandemic still in progress. We still don't know what the upcoming summer will be like, but you can always console yourself with this!

If you still own a Nintendo GameCube or have a Nintendo Switch, then this game cannot be missing from your collection. To find other titles from the Grande N and not only at a low price, we recommend that you click here, while, to be always updated on the video games of yesterday and today, we are waiting for you on techigames!

add a comment of Retrogaming: on vacation with Super Mario Sunshine