Let's see together in our review if this Rebel Cops, spin-off of This Is the Police and developed by Weappy Studios, is up to par with its predecessors.

There comes a point, very extreme, where the structures abandon you and the rules are no longer a weapon, they are chains that imprison you but not a criminal. This quote could fully reflect the storyline of Rebel Cops. The title is available for PS4, Xbox One, PC (version we tested) and Switch. Weappy Studios has pledged to offer a spin-off of This Is the Police this month; set in the same year, but in different locations. A group of Belarusian enthusiasts who are committed to bringing titles with a fantastic, interesting and fun idea every time.

I state that I am not a fan of this videogame genre, but the difficulty and the enormous depth in the gameplay, have managed to breach my interests. A not indifferent detail for those who, like me, love more action and improvise attack plans; without worrying much about the consequences.

Ripton: fertile ground of the underworld

Fall 1994, the title is set in Ripoton. The city is under the rule of Viktor Zuev, the mysterious crime boss who has taken over in recent years. Zuev has almost obtained the monopoly of the city: he not only controls every turnover in the area, but also the local officials, not forgetting the police force. Every function related to justice is tied hand and foot by the boss.

Little is known about Viktor Zuev. Rumor has it that he comes from the now extinct Soviet Union, and that he turned to racketeering after the fall of the regime. Forced to leave the country for stepping on the toes of a big shot of the KGB, Zuev finds himself rebuilding his empire in Ripton. His keen ability to persuade and intimidate has forced police, judges, local criminals and even doctors to bow to him. He runs his business thanks to assistants and intermediaries, no one knows what he looks like or where he lives. 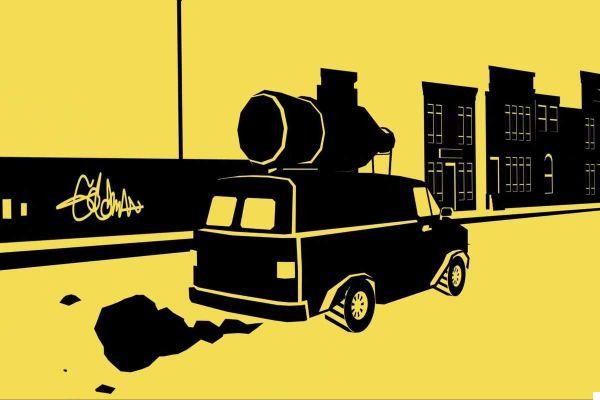 To unseat the emperor of Ripton we will have a small unit of rebel agents who refused to bow to the criminal organization. Instead of the police station, the headquarters is a shabby shack in the forest. Instead of the patrol cars, you only get an old Scooby Doo van. Instead of the canteen you will have to settle for simple dried apples. Even in terms of weapons you can not celebrate, in fact instead of guns in perfect condition you will have simple rusty revolvers. You may appear as a mere watchman outside the law, but you will be the only ones left to protect it.

After the first mission, which will serve as a tutorial, we will find ourselves in front of the city map. Fighting against criminal organizations is an expensive endeavor, so the few good people left in Ripton will raise a small sum to finance you. The money will help you get off to a good start and will help you buy equipment for your vigilantes.

Money is never enough and not too many people want to antagonize Zuev to do business with you, so you'll have to use your money sparingly. Guns, helmets, bulletproof vests and, above all, medical kits they are essential for the success of the missions. 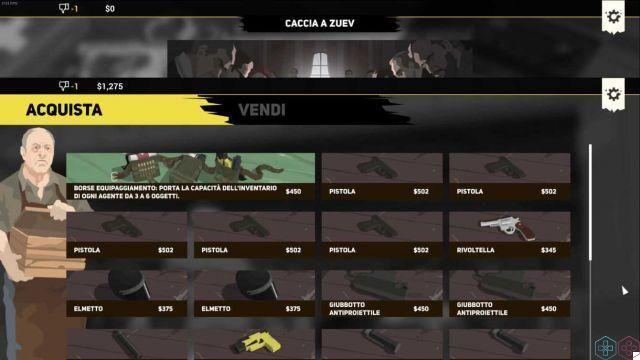 The hunt for Zuev is on - Review Rebel Cops

The essence of guerrilla warfare is based on stealth and precision, therefore an offensive approach will be fatal for the group. Such a small number of poorly armed agents cannot stand up to Zuev's army, so you cannot take no more than six agents with you per mission. Equipment is essential for each member of the group, but resources will almost always be limited.


All firearms require ammo, and each weapon has its own ammo type. You can carry extra magazines and reload weapons early to save space in the agent's inventory. Don't expect very complex team management: there are no special classes, each policeman has the ability to unlock the same list of available skills.

It is a pity because, with the classes, the field of planning could be amplified more. If the "engineer" class existed, the electricity could be cut off in buildings; and proceed with the action in the shadows. If you had the "doctor" class you could carry more medical kits or retrieve, for a limited period of time, an out of play agent. In my opinion adding the classes would have widened the depth of the gameplay and planning an operation. 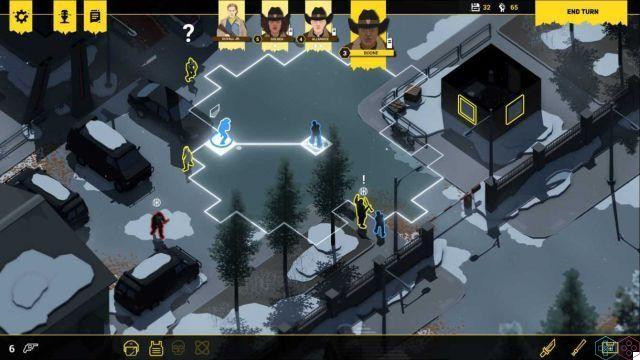 Even if we are in 94 'being in a "trend" can make the difference. There popularity, indicated by a thumbs up, stabilizes Ripton's popular thinking about your actions. Citizens won't do well if you ignore their problems, or if innocent people die in your operations. The mood greatly affects the only merchant who will do business with you.

In addition to the main missions, most missions can be completed additional assignments. Helping the inhabitants of Ripton will allow you to increase your popularity. Often trivial, sometimes complex and risky tasks are required. They will not only give you popularity, but also not indifferent rewards. It is up to you to decide whether or not to accept these assignments. Accepting an assignment and failing it will involve risks and your popularity will suffer. 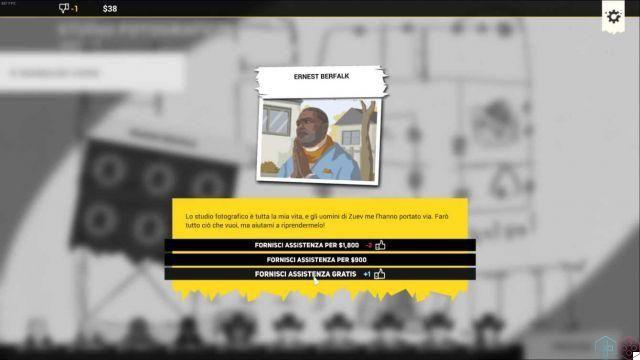 A mission lasts on average an hour and we will only have the chance to save the game 3 times higher to mission. More saves can be obtained by accepting additional assignments. The number, next to the icon floppy, shows how many saves you have left for the current mission. Saving at the right time is an excellent tactic, so as not to lose the progress achieved with difficulty. Well yes! Rebel Cops accepts no mistakes!

Like almost any management or strategic one, the isometric view camera cannot be missing; such a peculiarity. With the second mission begins the adventure against crime. The title is presented as a tactical infiltration game with the most classic and famous features of the genre. Being discovered means war and it will no longer be possible to appease the enemy's soul. Don't take your tactical choices lightly, Rebel Cops can suddenly raise the difficulty of an operation.

Each character on screen, ally or enemy, moves through a grid that delimits the play area. Agents can act in any order you like, and they can use i action points remained at any time until the end of your shift. I must say that the system of hit points it is something special. Depending on the position, and the distance, each character can choose different points to hit the enemy. Every part of the body, excluding the head, leads to bleeding which, after a few turns, leads to the death of the character. If you choose to aim for the head, the most difficult part to hit, the character's death will obviously be immediate.

The agents have to watch each other's backs. If an officer is about to move to where he can be spotted by a criminal, a nearby companion will warn him of the danger. One more reason not to split the group. A colleague can warn an agent of impending danger only once per turn. To figure out if an agent hasn't used yet "The notice" there is an icon of a Transceiver on his portrait. The eye icon that appears under the agent's feet indicates that one of his companions is watching his back and will warn him in case of danger. 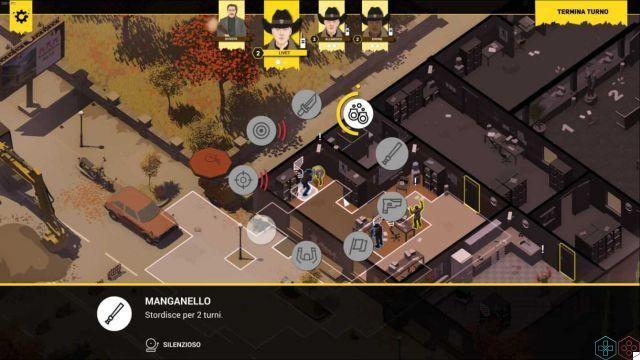 From the graphic point of view we are faced with a job that the boys of Weappy Studios they have always managed to make us appreciate. Characterized by autumn colors and classic 90 'yellow designs, also in this one, Rebel Cops, has that elegant touch that made the other chapters special. Unfortunately the plot is not softened by animations, but simply by illustrations; a feature that was greatly appreciated in This Is the Police 2.

The sound compositions that will accompany you during your adventure fully reflect the style Noir of the 90's. Depending on the situation you will find yourself, you will have a different type of composition that will be able to enrich the atmosphere you are experiencing. 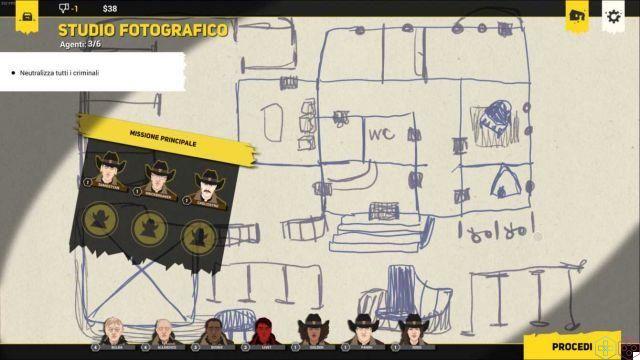 Perhaps most gamers, who don't chew the genre much, might be put off by the difficulty of the work, but Rebel Cops is a step up from previous chapters. A real challenge awaits fans of this genre, who will be able to unleash their natural skill in the art of military tactics. Advancing slowly, and united, will be the winning solution, even if it will greatly lengthen the time for the completion of the mission; which is sometimes very frustrating. Even if it is one spin off, Rebel Cops can be enjoyed even if you have never approached the two chapters of This is the Police.

That's all for this Rebel Cops review. To not miss further news and guides on the video game, keep following the pages of techigames!

add a comment of Rebel Cops review: unity is strength!