Puyo Puyo Tetris, the new Sonic Team game, has landed on our consoles. With a little suspicion, the adventure began in a world that we have now really seen in all sorts of ways

The game of Tetris and its geometric shapes have seen their start on consoles of the caliber of the Game Boy almost thirty years ago. It will be successful Sega to bring back a game that is as fun as it is old? Find out in this review! 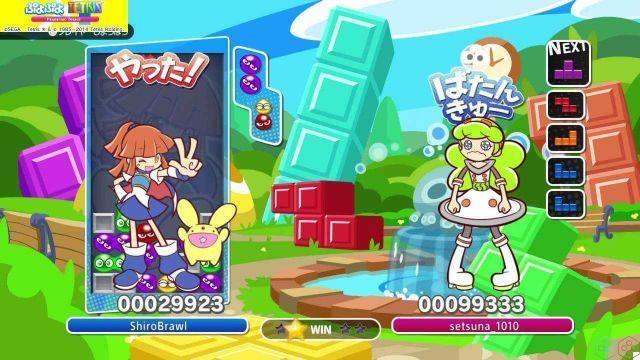 Puyo Puyo Tetris, as was to be expected, does not focus on an engaging story, but rather on fun for all ages.

The modalities of this video game are not many, but for the single player there is the possibility to attend a modality "history". This mode stuffs the game with dialogues bordering on ridicule, with bizarre characters clearly taken from Nintendo series. For example, we will meet strange "pucciosi" animals that follow the most famous ones Pokemon and the same goes for the human representatives, who are blatantly dressed like the trainers of the most famous Pocket Monsters in the world.

As mentioned, the dialogues will add nothing or almost nothing to the game. Soon most people will make the choice to skip the crazy discussions to jump on the next adventure. 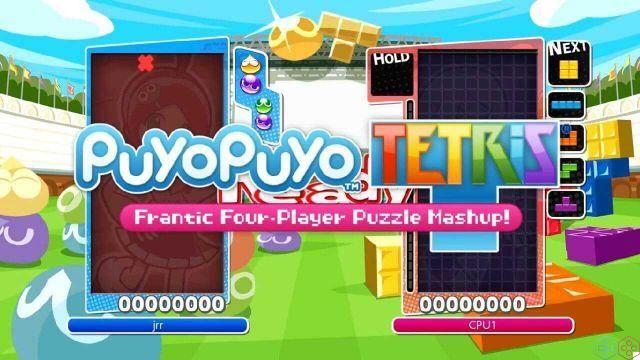 The game of Tetris after so many years can still be fun? Absolutely yes!

As anticipated, I wasn't very happy to have to review yet another clone of Tetris. In short, it had been a lot of fun in the past but when I was almost thirty "played" I did not feel comfortable with a game that I considered to be for children.

Having made the necessary premises, here are the even more due denials. Puyo Puyo Tetris it's fun alone and even more in company, but let's go step by step and see what the package of this video game offers.

If you play single Puyo Puyo will offer you a series of challenges that will vary from the most classic Tetris to some really fun mash-ups. The battles you will face will be divided into levels of ten challenges each, which obviously will put you in more and more difficulties as you progress. 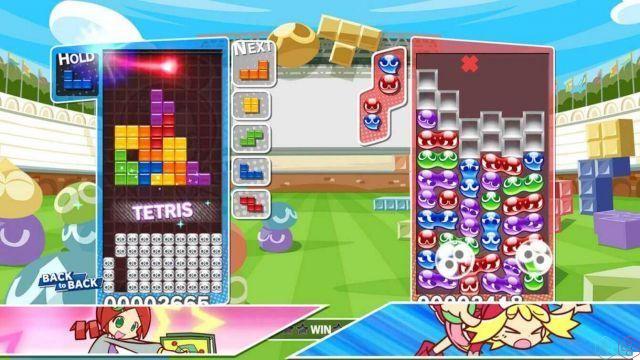 Sega has managed to renew two great classics like Tetris and Puyo Puyo, cleverly putting them under one roof

I think the game of Tetris needs no introduction: colored bricks of geometric shapes that descend from above. If you complete a horizontal line, it disappears and is lost when the bricks fill the screen by touching the end of the game board.

Puyo Puyo instead we find "drops", which will disappear once we combine at least four of the same color. This type of mechanics may seem simple and become boring in the long run, but Sega has thought of everything. The challenges will indeed be Tetris VS Tetris or Tetris VS Puyo and so on until the combinations run out. Furthermore, from time to time, not only will the opponent's readiness change but there will be malus, such as a shrunken screen or speed challenges where you will have to insert the right brick in the right place in the shortest possible time. Or again you will have to fight to the sound of points difference until the opponent's energy is exhausted.

Another aspect to take into consideration is certainly the fact of being able to put the opponent in difficulty by making additional lines appear on his part of the screen, which will raise the level of his lines towards the "KO". 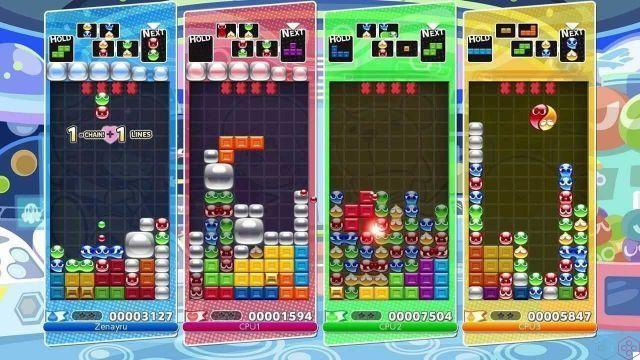 Puyo Puyo Tetris is fun on its own, but reaches its peak in party games mode. Are you ready to ruin some friendships?

Playing solo is fun, but this title also allows you to play in mode local multiplayer up to four players. I was lucky enough to have friends at home over the weekend and this allowed me to test the fun level of the game when playing it with multiple people at the same time. I assure you that there was no shortage of insults and the level of challenge was perceptible throughout the dining room. Titles like this aren't new to console owners Nintendo: there are in fact the various Mario Party o Mario Kart (to name two at random), but in my opinion on PlayStation 4 a video game like that was missing.

Maybe two modes are a bit 'few, but considering the low budget price we can forgive even this small mistake.

In hindsight I'm really happy that this review was my turn and, if passing as a child is the price I have to pay to have fun like this, I do it more than willingly.

add a comment of Puyo Puyo Tetris review: the surprise you don't expect