Port Royale 4 Review: Back to the Caribbean

One of the most famous seafaring / commercial sagas in the videogame universe makes its return with the latest chapter released a few days ago. A rather courageous choice that of Kalypso Media who has decided to focus on a genre that is not very popular in this period. Will it have been properly rewarded? Raise the anchor and set the sails, this one Port Royale 4 review it is going to start.

This new chapter, just like the previous ones, is set in the Caribbean, the place that gave birth to the golden years of piracy thanks to the many captains who have succeeded one another over time. In the game we will play the role of a young governor ready to conquer the dominion of the sea. The game is divided into two main game modes, namely the campaign and the free play.

These are then accompanied by the usual tutorial, in turn divided into smaller sections. Once these are completed, we will be able to access a new ship. The campaign is also divided into 4 parts, one for each nation present: Spain, England, France and Holland. Each will set us different goals ranging from trade to conquest. Although therefore it appears to be very similar, if not identical, to the previous chapters, there are enormous differences with the latter. Let's go and see them together.

Same, but all in all different - Port Royale 4 review

The first difference is represented by four characters included in this saga: the Corsair, the Merchant, the Adventurer and the Piratessa. Each of these will have very important advantages that will allow you to progress in the game depending on your style of play. You can then choose whether to trade or deal with merchant and military convoys to plunder their holds.


Your choice of character will greatly influence your experience, so pay close attention. In addition to the characters, however, it will also be possible to select your own nation. These too will have pros and cons, as well as two custom sailing ships. To unlock the latter, however, you will need permission from the viceroy, but we will talk about this later.

The map has also undergone intense rework by the developers. Although before there was a nautical map, used only for the movement of the ship, and then some "mini-maps" for each city, today we are left with a single screen that allows us to navigate, trade and build structures simultaneously. This has led to a disproportionate increase in the gaming environment and the system itself suffers. 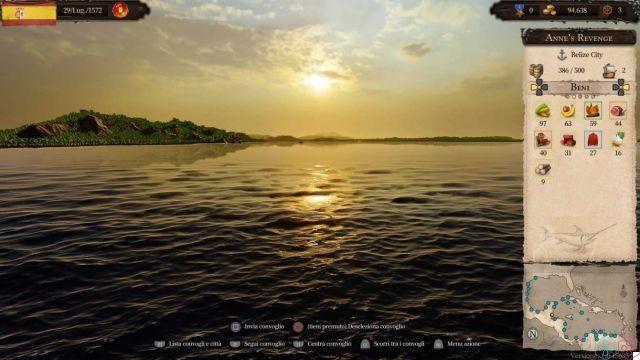 Such a large map, while it brings some advantages, on the other hand leaves something to be desired. A vast world inexorably implies more resources to manage everything as it happened in past editions. So here is that the cities become less populous, not to mention almost desert, despite having an abundant number of settlers. Even the ships encountered while sailing far and wide are reduced to the bone.

In fact, it will often happen to you navigate in completely deserted waters, especially if far from the usual commercial routes. To give "lightness" to the game, it was decided to sacrifice some "secondary" aspects that perhaps are not so secondary. Special events such as epidemics, famines and pirates that plunder far and wide have also been halved.

On the other hand, we can find a counterpart an exponential increase in fauna, with parrots flying over forests or cities and various fish, more or less large, swimming in the crystal clear waters. 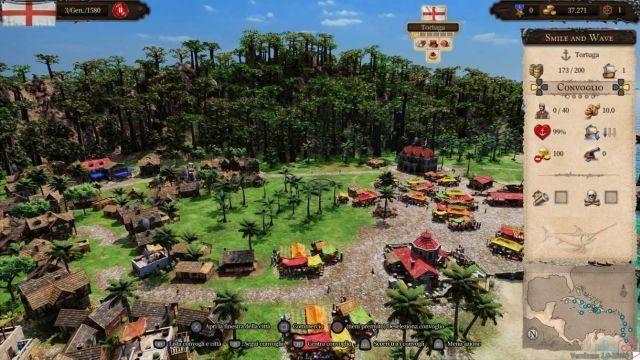 The real substantial difference, however, is from the point of view of the fighting. In fact, lovers of naval battles in real time will turn up their noses a lot for this new combat system that rewards tactics, but not strategy. If before we had to choose which cannonballs to buy to decide whether to board or destroy the enemy ships, now there will be no need.

The ships are in fact equipped with infinite ammunition that will make the clashes somewhat monotonous. However, this is not the only negative. If it is true that managing 10 ships at the same time as in the first chapter could be quite challenging, the turn-based strategy it completely takes away the lifeblood of fighting. It is unthinkable to base a naval battle by dividing it into turns, but at least the developers have made it interesting with some small strategies, even if sometimes these turn out to be quite imaginative.

By completing some missions required by other cities it will be possible to unlock power-ups that can be used in combat. These will be able to turn the tide of the match, completely overturning an already decided fight. It will even be possible move ships one space or hit two or more ships at the same time, not to mention fast reloading or the ability to move your ship further.

In fact, every sailing ship will have gods movement points which will allow him to move in the boxes and gods pivot points, which will allow you to rotate and position yourself to fire on opponents. In short, more than fighting a game of Port Royale 4 you will feel like you are playing a chess game, against opponents not exactly up to it. 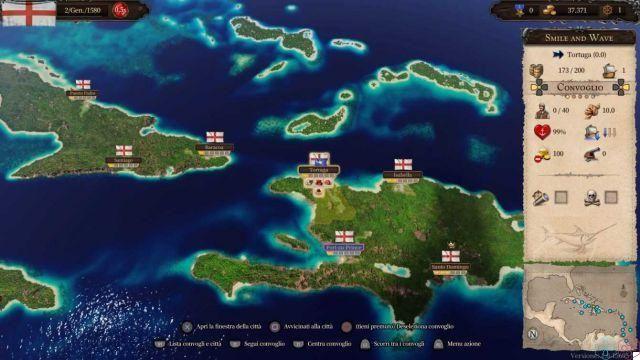 The basis of the gameplay that characterized this saga has remained almost completely unchanged. Trade will be the key to everything and will allow you to dominate all over the Caribbean. However, in this case there are some more or less intriguing and useful changes. An absolutely negative point is the absence of the usual acoustic signal for the docking of the convoy. In fact, his absence will see us forced to wander from convoy to convoy to understand his status.

On the other hand, navigation at sea has had an important change. Indeed the tides with attached currents and winds have been implemented. This provides for faster and slower navigation areas that can change the fate of the trade. Timing will be fundamental and will allow us to obtain more or less favorable exchanges.

All of this implies a fairly accurate use of automatic routes. In the latter, in addition to setting the various cities as stops, intermediate stops can be added to avoid areas of calm, adverse currents, shallow waters (very insidious for rather large ships) and the various storms that will affect Caribbean waters. . 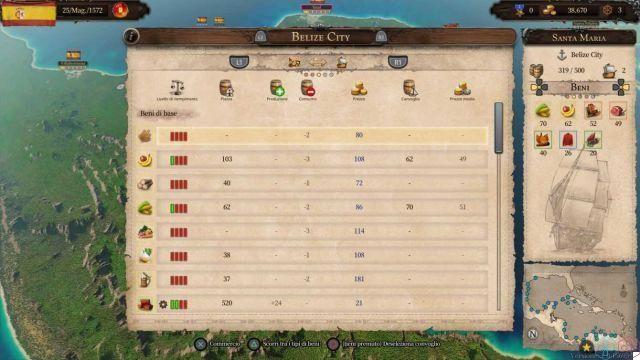 In cities, on the other hand, we immediately find new settings. If previously it was possible to visit some places to obtain building permits, loans or make donations to purchase reinforcements for the city, now all this can no longer be done. In this chapter, the tavern is also missing, a meeting place for new contracts, pirates, captains and shady characters with pieces of the map. It will be possible to build it, but now it takes on a whole other task, very important if the population is to grow.

In the game there will also be a growth of our character. Fame will be our passport to conquer the Caribbean. In fact, through secondary missions assigned by the viceroy or by other cities, we will get points. Every few points we will earn a fame point that will allow us to unlock bonuses on colonists, the two typical boats of the nation, captains or even structures for the production of goods.

Important was the great work that the developers did graphically. Obviously, getting such a detailed map was no easy feat. Breathtaking views with wonderful sunsets, however, collide with as many problems. The landscapes, although made up of fairly simple elements, have a good yield; on the contrary, the boats, especially the smaller ones, seem somewhat blurry.

Equally disappointing visually are the storms that turn out to be huge gray columns. Paradoxically, the storms of the first chapter seemed much more realistic than these enormous "tornadoes".

The camera also leaves something to be desired, with one somewhat unbalanced close-up view towards the top which prevents us from seeing all the elements present on the nearby ground. The audio sector, on the other hand, appears to be somewhat refined with ambient sounds and background music that blend very well, accompanying even the most demanding gaming sessions. 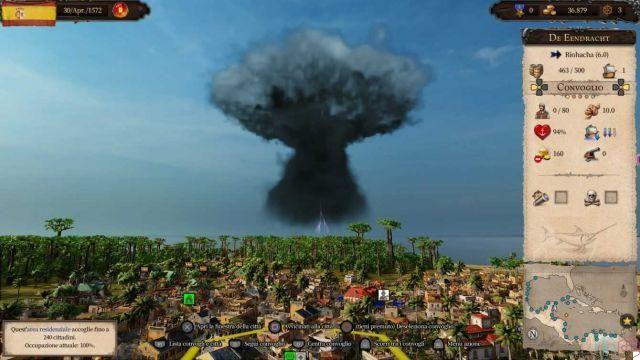 We have now reached the end of this review on Port Royale 4 and it is therefore time to draw some conclusions. The title looks quite different from its predecessors from all points of view, while maintaining the spirit that characterized the saga. Never as this time, however, will rise in prestige be important. In fact, you can unlock new boats, various bonuses and much more.

Although therefore there are some juicy news, among these there are some that are quite turn up your nose. One of them is the new turn-based combat mode. In this way you lose the taste of the strategy that has characterized the various Port Royale. Let's face it clearly, seeing the sailing ships move like that and with infinite ammunition makes you lose that sense of reality that characterizes the game.

On the other hand, making money is not immediate and to get a nice nest egg to increase your fleet it will take a long time. There is therefore a good level of difficulty as far as growth is concerned, however, the "fighting spirit" that one had towards other traders who, in the other episodes, exponentially increased their structures in a city, undermining your hegemony in the production of resources, has been lost.

The graphics have also undergone a major upgrade. You don't need to spend a fortune to see a Caribbean sunset. However, although there is this increase, closely some models are blurry and there is also a "depopulation" of the cities. All this serves to lighten the game, but still leaves something to be desired on the quality. 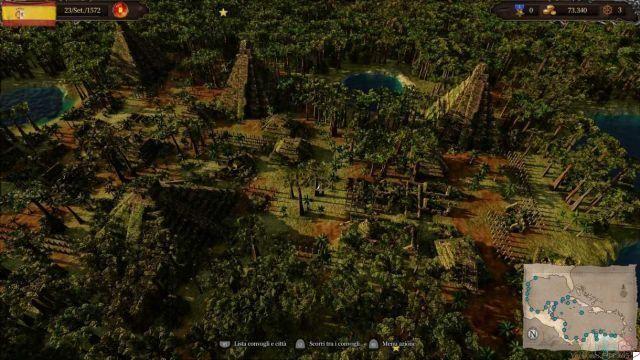 … Yo-ho-ho, and a bottle of rum for comfort

To conclude this review on Port Royale 4 we can therefore say that this title is a good continuation of the saga. Surely the difficulty you will face in managing your capital will be highly appreciated by fans of the genre. Small imperfections and somewhat ambiguous choices by the developers do not fully pay off.

In the long run it can be monotonous and the only elements that in the previous chapters gave a little sparkle and freshness have been made flat. We are therefore not in front of a masterpiece, even if it is not a game to be discarded. Fans will surely love it, but the less accustomed to the genre will not just turn up their noses.

Recall that Port Royale 4 is available for PC via Steam, Xbox One e PlayStation 4, while the version for Nintendo Switch will probably be released in 2021. To not miss further news and reviews, keep following the pages of techigames!

add a comment of Port Royale 4 Review: Back to the Caribbean