Author and references
Pokken Tournament DX will be available from 22 September on Nintendo Switch. We tried it in advance, that's what impressions it gave us

Despite Smallpox Tournament is already available for Wii U, I will tell you about it in this review as if it were a completely new game. We will start talking about the sensations that the title offers when played on Switch. We will then talk about the gameplay, the audio-visual department and finally everything that makes it unique Pokken Tournament DX.

As soon as I started the game, there was one thing that struck me a lot. If you don't press L + R, as indicated to go to the main screen, a presentation video will start where we will see an animated video with all the Pokemon fighting each other. The first time I saw it I said WOW! The Pokemon animations were perfect and nothing was missing.

When L + R is pressed, our adventure begins. Our "tutor“, Who will follow us forever giving us valid advice, will ask us the classic questions of the professors of every Pokemon game. Gender, choice of skin color, accessories such as hats etc. In addition, we will be asked for one fundamental thing: our companion Pokemon. I personally couldn't resist and immediately chose Mewtwo Black.

A very important thing, and one that I highly recommend, is to do i first tutorial main and then the dojo moves. The latter allows you to train with the moves of the chosen Pokemon giving us the opportunity to learn quickly. Then do the combo dojo to learn the most difficult combos. Trust me, there are many!

Visual and sound sector, you could not ask for better

It cannot be said that the visual sector is at the levels seen in many recent titles on the counterpart consoles (Sony and Microsoft to be clear), motion capture is certainly not used to have perfect movements but ... all this is not necessary. Oh no, playing Pokken Tournament DX everything I noticed except the technical differences with the other consoles.

The game can be very well placed side by side with any fighting game and it would make a good impression, trust me. Of course we see (also a lot) the computerization of Pokemon. We are a long way from the style used on 3DS. Nevertheless this style has its why. Each Pokemon is really made to perfection, as well as everything that appears on the playing field. There is nothing to complain about either Pikachu's lightning bolts or Charizard's fire. But the animations that impressed me the most were two: the teleportation of Black Mewtwo and the ranged attack of Darkrai. 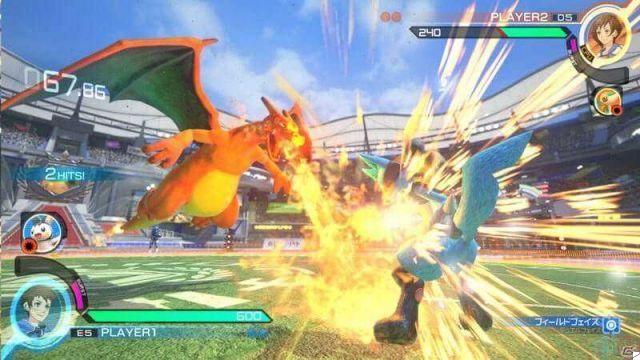 With regard to music there isn't much to say. The style is that of the usual Pokemon games. Cheerful songs in moments of stalemate such as the main screen and the like, or melancholy and full of terror in situations where they are needed. The sounds of the single strokes are interesting, but above all the tunes of each special move (the Resonance moves) that follow the recreated animation. For example, Gengar's is somewhat "ghostly".

The style of play is equivalent to a fighting open arena. It will be played in different arenas, more or less large, round or oval. The fighting style is up to you, each Pokemon has a lot of different abilities, as well as different combos. From the simplest to the most difficult, it's all about training. The "attack" keys are 3, while with the B (the remaining one) you can jump. The combo simpler ones involve the use of a single key, with the addition (at most) of the directional keys. The more difficult ones, on the other hand, will include all the keys (I only learned one out of 6 of my companion Pokemon). The best part is that you can stop one combo and start another one right away. Each Pokemon has a button or sequence that blocks their combo and immediately starts another one.

If you're wondering how to stop an opponent's combo, well it's not possible. The difficulty in making very challenging combos already in itself is a limit that has not been accentuated by the developers with the use of a method to block them. There is, however, the possibility of counterattacking. The counterattack can be done with the X + A buttons and can also be loaded to break a parry. If an enemy attacks you while you charge the counter, our Pokemon will automatically attack him dealing a lot of damage.

Pokken Tournament DX: the differences compared to other fighting games

The novelty that brings Pokken Tournament DX as a fighting game is the phase change. In fact we will find ourselves playing a round in which our moves will involve a variation from the panoramic phase to the duel and vice versa. In panoramic stage we will have a 3D movement inside the arena. If we turn to the duel phase, for example through a combo, we will find ourselves using the classic beat 'em up movement (jump, move left and right, squat down). Another combo or hold will take us out of the duel phase and bring us back into that overview.

Let's talk about Pokemon Companion. For each battle we can choose different companion Pokemon. They are always chosen in pairs, then at the beginning of the match we will decide which one to use for that round. On the left we will find the companion Pokemon icon that will recharge over time. There are different types, those of attack that do more damage than anything else, those of defense that mark a territory in which you remain protected and finally i Support Ticket real, those that recharge HP or increase the characteristics such as defense, attack or speed (or decrease them to the opponents). 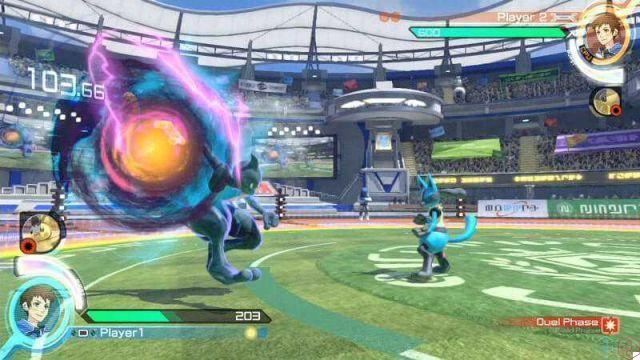 When fighting, always keep an eye on the lower left. There you will find us not only yours HP but also the bar of the Resonance. The Resonance allows you to interact directly with your partner (like the mega-evolution in the cartoon). When you are in resonance your attacks will change and will be more powerful, plus if you press L + R a second time you can use a super move. Be warned, the super move is parable.

Pokken Tournament DX: parades and tutors, a matter of tactics

Speaking of parades. With R you will have the possibility to parry the opponent's blows. But use the parry wisely because it can be broken. The thing that struck me a lot is the "triangle”That is created between parrying, grabbing and basic attack. In a nutshell a triangle like the types were in the early Pokemon games, fire beat grass, grass beat water and water beat fire. That's right on Pokken Tournament DX too. If we prepare a basic attack, it will be effective against an enemy that is attempting a grapple, but it will not be effective against the one who is blocking. There parade instead it is effective against the attacker but will be broken by a hold. Consequently, the pinch (made with three fingers) it will be effective if a Pokemon is parrying, but will be blocked if we are attacked.

Finally we will talk about our "tutor". She will help us in battle by giving us suggestions, but also at the beginning of each round. But we will decide the help we want. In fact, if we go to “our city” we will be able to change not only the character and the companion Pokemon, but also the help of our tutor. We will be able to choose a random help, or to increase the companion bar every end of the round or, again, we can choose to increase the resonance bar if we lose and so on. A wide choice for various strategies.

We have already talked about the possibility of playing in local with amico, but of course it is also possible to make a friendly match with the CPU. In both cases it will be possible to have a match 1vs1 or a 3vs3. In the latter mode each player will choose 3 Pokemon and whoever defeats all those opponents first wins.

There will be no lack of opportunities to play Online. Battles are available friendly or classified. It will be tough, but each of us will have a chance to climb the world rankings. In addition, the Fighting mode is available in Group. This allows you to search for a group of people and challenge them multiple times in both a friendly match and a ranked match. This allows for a rematch in the event of a defeat: we like it! 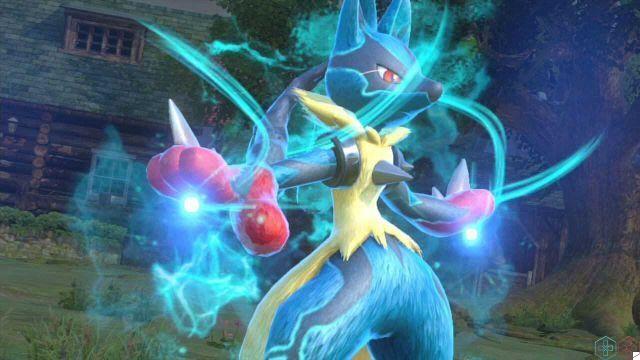 Let's not forget the mode Daily Challenge. In fact, every day it will be possible to engage in a challenge dictated by the game that will involve the use of a Pokemon chosen by us or by the CPU. In any case, winning will allow us to get rewards and skill points for the Pokemon used.

For the single player game we have a little adventure called Alloy. It is none other than our climb through various leagues (starting from D). First of all we should climb the ranking of the Alloy playing a series of 5 games, after which we will move up or not in the ranking. Once in the top 8 we will perform a elimination tournament, which if won will lead us to challenge the champion of the league. If we beat him we could be promoted to the next league. This mode also includes a small story that goes hand in hand with our rank up. We will in fact have to deal with an unknown trainer and her Black Mewtwo.

New Pokemon, new support and many, many news. This is what we like about Pokken Tournament DX.

The cgraphic department it's a real surprise (remember the many negative expectations of fans for the graphics on Switch of games in general). Gameplay one of a kind that allows a fighting game to look "different" from the competition. Among other things, the game appears simple to beginners and very deep to experts (who are looking for such depth). The game itself leads you to level up through the experience obtained, gradually managing to become more and more expert in the game. All this in a saga that is one of the best ever. A new and better way to see our Pokemon friends.

add a comment of Pokken Tournament DX review: even better on Switch