Pokémon Mystery Dungeon, the 2005 spinoff dedicated to the most famous pocket monsters on the planet, has landed with a remake also on Nintendo Switch, and we could not miss with our review of the game

Spike Chunsoft's team continues its remake trail after that of The Legend of Zelda: Link's Awakening, trying to rejuvenate a title of now very old generation. Leaving the original story unchanged, the studio has significantly increased the number of Pokémon in the game, thus proposing the remake of the first two titles of the Mystery Dungeon series, that is "Rescue team". Will he have convinced us? Let's find out together!

Help, my Meowth is left in a tree

Pokèmon Mystery Dungeon is characterized by a decidedly plot different from that of the titles of main series. While in the main saga we play as a Pokémon trainer intent on becoming the best in the world, here we find ourselves in a strange situation from the beginning. The protagonist, to whom we will have to give a name as usual, is turned into a Pokémon under mysterious circumstances. Aided by a partner Pokémon, our goal will be to create a rescue team to help Pokémon in distress. Meanwhile, our protagonist will investigate the mystery of his transformation.

The game starts with a kind of test, formulated by a presence that is not clearly shown. These simple "attitudinal" questions serve no other purpose than to outline a ideal profile of the player, to assign him the Pokémon to start the adventure with. The choice of starter can fall between ben 16 creatures from the first 3 gen Pokémon, against only 3 choices of the main saga. After that we will be allowed to choose a "partner" Pokémon, that is the creature that will find us unconscious at the beginning of the game, will grant us a home and will accompany us on our adventure until we discover the truth. 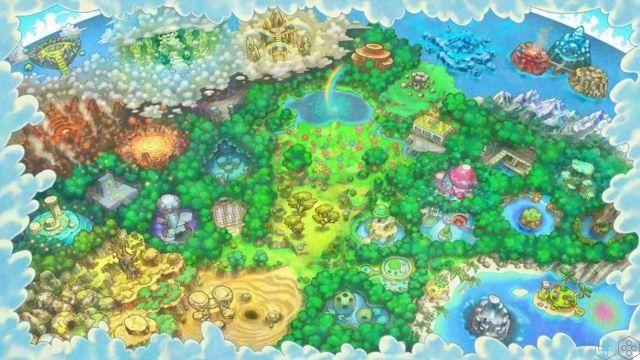 Starting to play Mystery Dungeon DX, we realize just how much simple is the main structure of the game. The main hub is structured as a village built and inhabited by Pokémon, which perform different functions. There is the Kecleon shop where to buy items, the Banca Persian where to deposit the money, the Makuita gym where to train your Pokémon to level them up and so on. On the far right of the village we find the Pelipper Post Office, from which it will be possible to access the requests for help of Pokémon in difficulty.

Here we come up against the first small problem regarding the mechanics of rescue missions. In fact, every morning, our protagonist will wake up and launch into the exploration of the dungeons to run to the rescue of lost or injured Pokémon. At the end of the chosen dungeon, the game will automatically take us back to our house in the village and we will go to sleep, and then wake up the next day and do the same activities again. This cyclical and repetitive mechanic does not allow you to complete more than one dungeon per day and makes the gaming experience excessively slow and fragmented.

A separate discussion regarding the management of Pokémon and their progression, which reserves a good freedom for the player. From the village it is possible to create the "Base Camps" where to send the pocket monsters who will decide to follow us once defeated in the dungeons. Similarly, it is possible to train those obtained through i "Training Ticket" to level up our favorite Pokémon. It will also be possible to build rescue teams according to our needs and the dungeons we are going to face, adjusting according to the type and level of components. 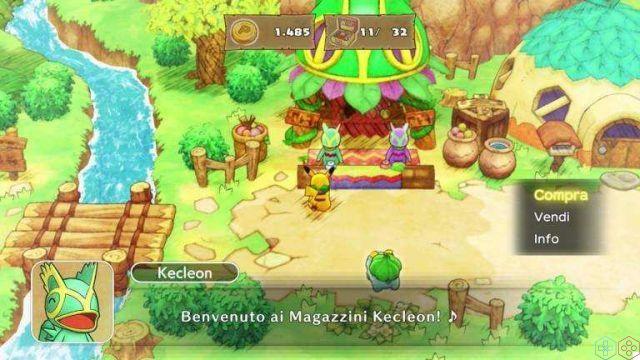 Once the ideal team has been assembled, it's time to start exploring the dungeons. Here comes the dungeon crawler nature of Mystery Dungeon in all its glory. Each dungeon is structured floors (max 30), and is generated randomly both in the plan and in the enemies that we may face. In the main menu of the choice of the dungeon, in a window on the right it will be possible to see the probable Pokémon that could appear and the possible presence of a "special" Pokémon, that is a Pokémon stronger and rarer than the others and generally very difficult to enlist.

The surface of the floors is structured as a kind of chessboard, and with every movement we make, the opposing Pokémon will do the same, until they come into contact and fight with our team. Beyond that, the plans are littered with hidden traps ready to complicate our lives. The mini-map shows the location of enemy Pokémon, objects and stairs to access the next floor. The checkerboard structure dictates a rhythm of play decidedly strategic and thoughtful, both in the displacement and in the combat phase.

In moving, this mechanic collides slightly with the weight of the years: the rhythm sometimes makes the exploratory phases inside the dungeons not very fluid and cumbersome, causing the player to run to the nearest stairs to complete the dungeon. The combat, on the other hand, turns out to be quite fun, fully resuming the turn-based combat modes typical of the pocket monsters saga. With the + button of the console it is possible to change the Pokémon to control between the 3 of the main formation, and to program the attacks between melee and distance based on the positioning, gives that touch of strategic to Dungeons & Dragons that you never mind! 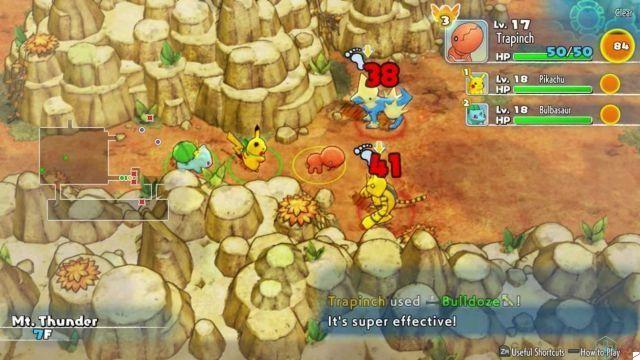 One of the big differences that stand out in Mystery Dungeon, compared to the main Pokémon saga, is the "capture" mode of Pokémon. Unlike usual, as there are no coaches, in this chapter it will be necessary to expand one's roster enlist the monsters once defeated. This mechanic, due to its total randomness, reveals itself sometimes frustrating and redundant, often leading the player to repeat the same dungeon several times in search of a particular Pokémon.

Once the fight is complete, strictly with the team leader, the Pokémon in question may be fascinated by the team and decide to join it. In order to bring home the new precious ally, you must have unlocked the base camp suitable for that type of Pokémon. This is thanks to the Club Wiggglytuff in the village square, or using a Sfera Wigglytuff if we find ourselves struggling with a dungeon. Also, to recruit a Pokémon you must complete the mission without the creature in question going KO.

This condition it doesn't always turn out to be simple to satisfy, especially in more complex dungeons or without the proper items. The latter prove to be fundamental to linearly advance in dungeons, heavily affecting the game experience. Some dungeons, especially those of Legendary Pokémon, reveal themselves almost impossible to be faced without the proper objects, and without apples with which to fill the belly of the team leader, reaching the exit of the dungeons becomes very difficult.

In the event that all our Pokèmon are knocked out, you can use the mode of SOS of the Pelipper Post Office: thanks to this mechanic it will be possible to assemble a rescue team to rescue injured Pokémon. In addition to being an excellent resource, this mode allows you to play online with friends and their personal teams to tackle dungeons together. Really not bad. 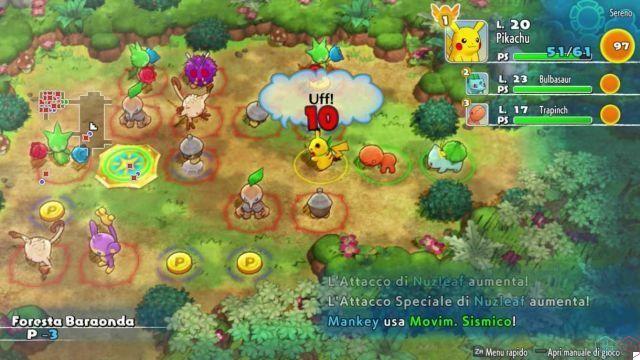 Will you be able to save them all?

Analyzing such a remake is never easy and you have to make some clarifications. Pokémon Mystery Dungeon: Rescue Team DX rises from the ashes of a game with a name and tradition import anti, relying heavily on the nostalgia of those who have long been waiting for a remake of the saga in question. The restoration work, the renewed appearance and the choice to combine the two chapters for Nintendo DS in a single game, are revealed apt and well-developed choices. The game then, technically, performs best on Switch, showing perfect stability and playability for the type of console in question.

The game imposes itself as a dungeon crawler satisfying, long-lived and fun, thanks also (as already mentioned) to the nostalgia factor. The expanded roster of Pokémon, the Mega-Evolutions and Specialties complete an already excellent game, making it an unmissable chapter for fans of the saga. Absolutely noteworthy after-game, really mammoth.

Some small defects dictated by the age of the game and gameplay, unfortunately, do not allow him to reach perfection despite the excellent refurbishment work carried out. The promises made by Spike Chunsoft, however, have been fully maintained and we couldn't ask for a better debut for the Pokémon Mystery Dungeon series, on the current generation.

What do you think about it? Do not hesitate to comment and continue to stay connected on techigames for more reviews, guides and much more from the world of video games and beyond. Until next time, coaches!