Pit Blocks 3D is a puzzle game from the same family as Tetris, but with some peculiarities: it is set in space, the view changes at will like the blocks, and there is a semblance of a main story. But not all that glitters is gold

The genre of puzzles has always fascinated every type of player: it is fun and gives the player a minimum of attention necessary to solve the level by honing his skills. Not by chance Tetris was the progenitor of that series of games in which it was necessary to insert blocks in the empty spaces, in order to match all the blocks that randomly flowed from above.

Over the years there have been many reinterpretations of this type, up to Pit Blocks 3D: in all respects a classic puzzle, where, like the aforementioned Tetris, you have to insert the blocks inside a playing field.

The setting of Pit Blocks 3D and the Solar System: we are researchers on behalf of a research agency and our job is analyze the planets that gradually alternate, getting us closer to our goal which is the Sun. All this while building unidentified geometric figures and trying to fill the game grid without getting to Game Over.

In the case of Pit Blocks 3DHowever, the realization of this type of games is not always at its best: follow the review to understand why! 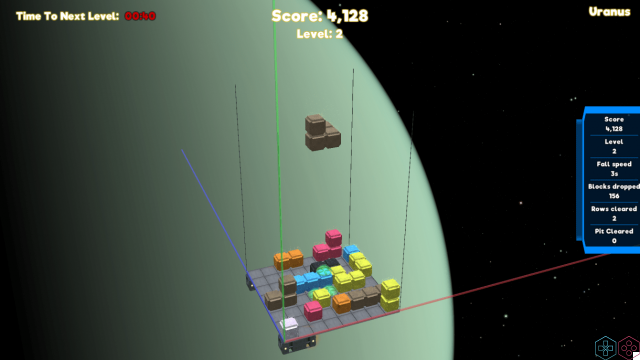 The context in which the game has been inserted is space, more precisely the Solar System. Here, starting from the farthest planet up to the Sun, our first adventure takes place: at the end of a timer, which varies according to the difficulty and size of the playing field, you are catapulted to the discovery of the next planet with a exhaustive caption of the same.


The information collected can be viewed, in the form of information cards, in the main menu, but there is a but: These cards can only be collected on difficulty levels Advanced ed Expert. Nothing too complicated: the difficulty of Pit Blocks 3D it resides in two major aspects, but I will talk about that later.

Once you reach the Sun, you will be able to discover other Systems, this time not real but fictional. Here too, each System has its own Planets and related cards to discover, while the blocks to be arranged will descend at an ever increasing speed.

Unfortunately, I have noticed noticeable drops in frame rate especially by moving the camera towards the Sun, or in any case towards the center of each System, making mine frustrating gaming experience. The problem is solved by moving the camera away from the view of the star, but the final level of each stage is set precisely in correspondence with these stars: the camera movement will be useless and the frame rate drops, sometimes even 5/6 per second, they will be really unbearable. 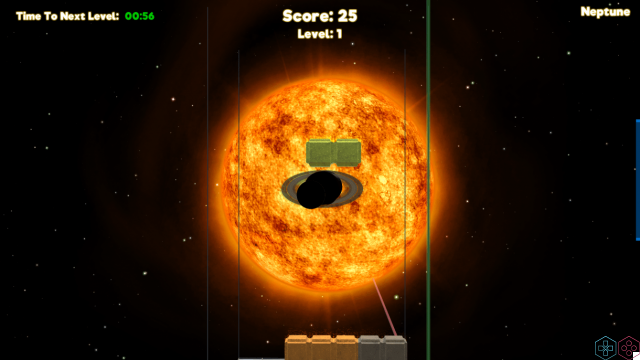 In Pit Blocks 3D it is possible, at the beginning of each game, to manage the playing field: to make it least will affect the countdown necessary to advance between the Planets that will be a few seconds, while increase its size it will make the maneuvers of moving the blocks easier, in spite of the countdown which can reach several minutes.

The blocks are of different shapes and sizes and can be moved to your liking to be well positioned by the player. The movements take place on the planes X and Z of the playing space, e at greater difficulty they take on more complex forms.

It goes without saying that the greater difficulties require greater attention from the players, also thanks to the speed with which the blocks fall. But they are also the only way to get the summary sheets of each Planet discovered, in order to complete the collection.

Furthermore, the blocks can be turned upside down as you want: vertically or horizontally, each player will know how to position them in order to complete a surface. As in any tetris, in fact, the completion of a line or, in this case, of a surface of blocks, will make it possible to get rid of the latter and to lower the overall height of the towers built.

Unfortunately, and here I still use this adverb, the movement of the blocks themselves is cumbersome and imprecise: the controls will react after a few fractions of a second, and in my gaming experience it has also happened to me many times that command input was not logged by the game, helping to increase that sense of frustration which, combined with the noticeable drops in frames, do not allow me to give Pit Blocks 3D the sufficiency it would have deserved.

Pit Blocks 3D does not revolutionize the genre of puzzles, but manages to entertain the player with a game system that has already been tested for some time. The game audio is made up of only two tracks that repeat themselves in an infinite loop, but they are pleasant to listen to: they refer to the soundtracks of those sci-fy games. The game is completely in English, but it's pretty basic.

All in all, if Pit Blocks 3D, which you can find on Steam, had not had macroscopic and annoying drops in frame rate, and if the commands responded perfectly to the inputs, he would certainly have deserved the pass. If you are looking for a platformer, check out the vridniX review!

5.5 Promising but with major limitations