In today's review we had the opportunity to try the new Pikmin 3 Deluxe for Nintendo Switch, fruits and monsters await you

Nintendo had already come to our rescue for the first time, when in March it released Animal Crossing: New Horizons, gracing us with a pleasant escapade on a desert island during the lockdown. At the gates of the new closures, he offers us again a remote journey, but this time even further away. In this Pikmin 3 Deluxe review, we will reach a distant planet that seems destined to once again receive visitors in search of food.

The past that returns

In 2013, the WiiU had been out for a year, accompanied by a heavy dose of confusion to dazzle its excellent catalog of games. Given the low diffusion of the console, at the end of its life cycle, many users did not have the opportunity to try some of the best titles from Nintendo of the last decade. Donkey Kong Country: Tropical Freeze, Bayonetta 2, Mario Kart 8 and Pokken are just some of the games that Nintendo has decided to save from oblivion by bringing them to Switch, updating them with additional features, new content or even just small graphic upgrades.

There are very few WiiU first party titles missing from the Nintendo Switch catalog, and with the release of Pikmin 3 Deluxe the list is running out completely. A title that seems to have come out a bit on the sly, but that arrives so much chock full of improvements, that it would be a shame to miss it between one console generation and another. Let's move on to analyze Pikmin 3 Deluxe with our review. 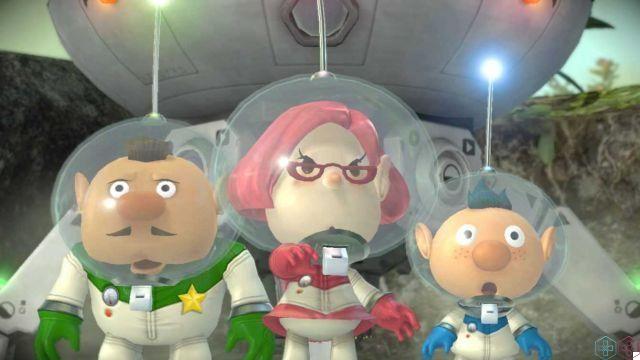 The leaders of the planet Koppai, following a severe famine caused by rapid population growth, it sent numerous space explorers in search of food. Many of them have returned empty-handed, the only ones not returning are a team of three space explorers. Their ship was headed for the PNF-404, but an unknown failure of the Drake spacecraft caused the explorers to crash to three different places on the surface. Alph, Brittany and Captain Charlie however, they are destined to reunite with the help of the small inhabitants of the planet: the Pikmin.


Creatures that seem the hybrid between a seedling and an animal, extremely willing to help others. The planet without them would be an inhospitable place due to the presence of one particularly aggressive endemic fauna and large in size. The story of the game will lead our heroes to search the planet for an old acquaintance, necessary to be able to return home. Also based on the resources obtained in the game, it will be possible to unlock several different endings.

Pikmin 3 is a type of game that leaves narrative on a secondary level of importance, but for those looking for more insights, the Deluxe version offers some really interesting tools. There Encyclopedia it is in fact an encyclopedia full of information on the creatures of PNF-404 and updates every time you catch one. Even more interesting are the two additional stories, present only in the Deluxe version, which act as a prologue and epilogue to the game with protagonists Olimar e Louie. However, what makes this series of video games really interesting is their gameplay component, one of a kind and suitable for everyone. 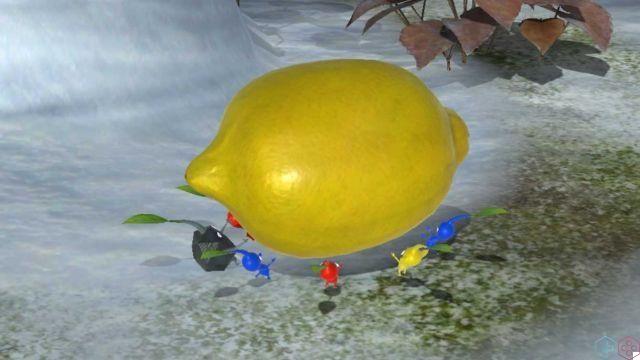 First of all, let's talk about the controls - Pikmin 3 Deluxe review

Being a strategic and management video game, you will have many actions to perform and the controller will initially seem like a limit. The desire to keep a mouse at hand is not small, but over time you get used to it. In fact, the character we control moves with the simple use of the stick, and always the cursor also moves with the same stick indicating the goal. To help us with the aim we can rely on the ZR key, which will automatically lock the pointer on the closest target, pressing it again will move to the next one.


As far as the aiming system is better than the one on WiiU (the lock-on was not completely automatic), there is still no way to manually choose the next goal, so the game will do it automatically based on the circumstances. Fluid instead is everything else and not for a moment we felt the lack of a second screen to harm the cervical. 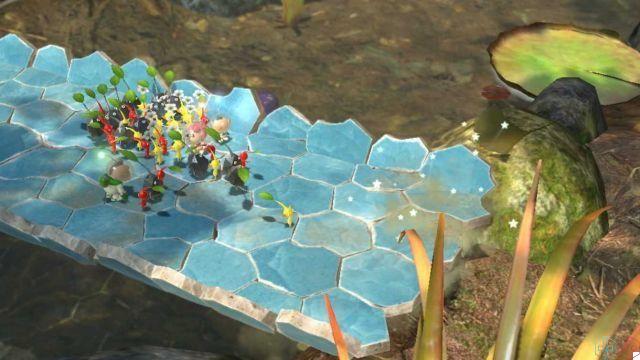 Alph, Brittany and Captain Charlie are the explorers who are responsible for finding new resources to save their home planet. But doing it on an empty stomach would be next to impossible, so our main purpose is to find fruits, vegetables and every kind of nourishment the planet has to offer. The docile Pikmin will follow you wherever you go, providing you with the help you need. In Pikmin 3 Deluxe there are 7 types of Pikmin: red, blue, yellow, purple, white, stone and winged. Everyone has different abilities and resistances.

The blue ones for example they breathe underwater, while everyone else would panic and die shortly thereafter. Those steering wheels instead they are capable of traversing inaccessible areas and attacking other winged creatures, but they are extremely weak against terrestrial fauna. In addition, the special characteristics of the Pikmin also make them useful for remove obstacles. For example, the yellow Pikmin are resistant to electricity, so they will be able to tear down electrified fences.

The Pikmin, however, are not fully independent, the explorer must first throw them (literally) at the target and only then will they start to work automatically like real ants. If there is a fruit to be harvested they will bring it to the Drake to increase supplies. If they carry pellets or an enemy, they will take it to the Onion, which is their home which will create new Pikmin. They decide the path to take on their own and it will always be as short as possible, they will stop only in case of impassable obstacles. 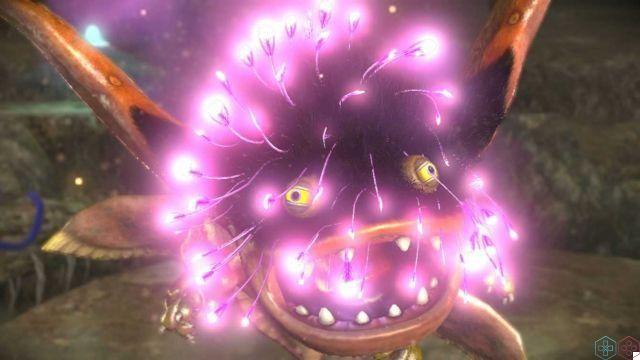 The enemies instead, between boss and more normal creatures, represent each of the little puzzles to tackle. From the most classic weak points located in the butt, to real strategies in which it is necessary to understand which Pikmin to use to break down a particular armor, or decide the right moment to attack.

However, attention must be paid to the flow of time, because at night the most ravenous creatures will begin to wander. When midnight arrives, the mission will automatically stop and the explorers will temporarily return to space. Any Pikmin left out of the group or away from the Drake is sure to come to a bad end. The mission will then resume the next morning, being able to restart with the mini allies who will be saved by entering the Onion. A time limit which in reality does not represent a real cause for stress if you are even minimally organized, or in the worst case the Pikmin will be quite easy to recreate. 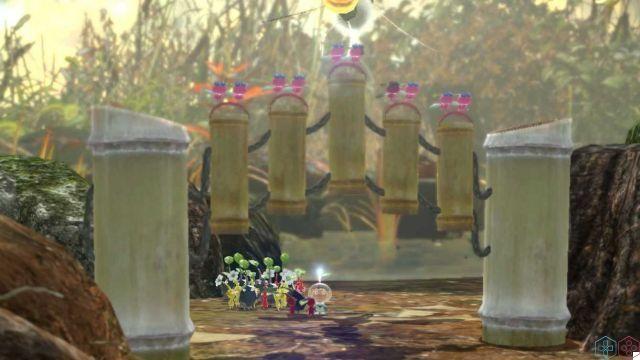 What Pikmin 3 Deluxe can do is create a great gameplay loop, especially for those craving completism. Each level has its own goal, whether it is to reach a specific place, or to collect enough fruit, but what gives pleasure is being able to find the right sequence of actions to make the process ever closer to perfection. Approach encouraged by the ability to replay the main storyline a higher difficulties and by brand new trophies, added in the Deluxe version of Pikmin 3.

In addition, the additional missions are real timed missions, where you need to gather resources as soon as possible. You won't even come close to the complexity of Satisfactory's factories, but seeing a large number of Pikmin busy moving and working under your command, gives a pleasure as unique as that of observe an anthill in a display case.

And if a friend of yours decides to join the game, he can do it at any time. The screen will split in two in split screen and you can play together using different explorers. The gameplay will not change much, in fact even in single player you must use all three characters by launching them in remote areas or to manage the base yourself. A second player can only make the games more fun and fluid (even more chaotic, but it depends on the nature of the players). 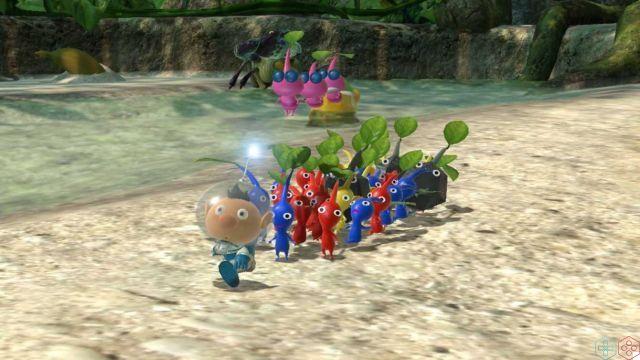 So many options - Pikmin 3 Deluxe review

Pikmin 3 Deluxe contains a lot of new content such as extra missions, improved controls, online rankings and additional stories. It also comes with some extra options: hide the radar or change its orientation, activate the controls with the gyro, invert the controls and hide the aids. There have been no steps backwards, but it is under the graphic aspect that we were a bit disappointed.

Usually a great encouragement to buy these revamped versions of WiiU titles is the ability to play them in full 1080p or at more stable framerates. From this point of view the Deluxe version does not contain any improvements, so it remains playable only at 720p and 30 FPS even in dock mode. On the small, portable screen this won't be a problem, but on a monitor or TV, the serrations around the models are quite visible. Plus, the semi-realistic graphics haven't aged very well, but are still nice thanks to the pleasant play of light and different atmospheric agents (and the Pikmin are always adorable). 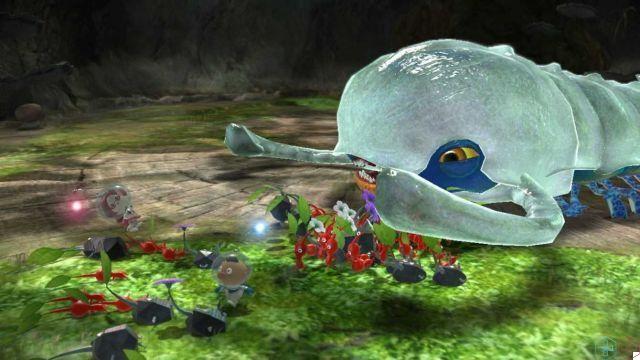 At the end of this Pikmin 3 review, we can't help but recommend it to you. It is about a deluxe version with all the trimmings, which brings with it a lot of additional content. If we could have complained about the shortness of the WiiU version, now it is no longer possible. The extra missions and new difficulty levels will give you enough reason to keep playing for hours. Plus, Pikmin remains a pretty much a type of game one of a kind and it would be a shame to let it slip away. However, it is a title not free from some flaws. The controls, for example, although improved compared to the past, could benefit from some other small improvements. Finally a real shame it is graphics that have not been remastered to 1080p, however, nothing to ruin the experience.

Pikmin 3 Deluxe is a video game developed by Nintendo now available exclusively on Nintendo Switch. If you want to stay updated on video games and technology we advise you to continue following us on techigames.

Pile Up! Review: when one box leads to another ❯

add a comment of Pikmin 3 Deluxe review: a remote and better planet