Partisans 1941 review: the war experienced by the Resistance

The Second World War was seen from many points of view in the videogame field. Sagas like Call of Duty and Battlefield have sometimes made it a real workhorse, creating real masterpieces. Partisans 1941 however it differs a lot from the frenetic style that is typical of first person shooters. Tactics and strategy will be the masters in this title of Alter Games. Let's start this review by Partisans 1941 and let's find out together how this title performed.

Anyone wondering what kind of game Partisans 1941 is will not get a short answer. This game indeed mix elements of stealth games with those of strategic in real time. As if that weren't enough, there are some that recall i survival, such as resource management, and others typical of turn-based games. In short, a nice mix that, said in this way, could scare even the bravest.

However, Partisans 1941 can be seen as a Panzers Phase One in stealth version in a way. The older ones will surely remember this FX Interactive title. However, if in that one the type of strategy that was adopted was the master, in this game the stealth mechanics are the masters.

Obviously, nothing else could be expected. The partisans in fact were forced to act in the shadows in order to hurt the Reich from within and very often with means of first fortune or with limited resources. And it is precisely this aspect that the developers of Alter Games wanted to emphasize in Partisans 1941, giving away a challenging and "slow" gameplay. Let's continue this review on Partisans 1941 and dissect this game.

From stealth to survival - Partisans 1941 Review

As we said, this game is a mix of styles. Mainly the player will be busy staying hidden in the foliage and assassinating the Nazis by stealth. This obviously is not the only tactic, but it is the only one that will allow you to save ammunition and, if necessary, also the heals. In fact, finding these resources will not be easy. The loot leaves the time it finds by being random and you will have to be very lucky to find what you need. But let's go in order.

The campaign is structured in missions, each obviously marked by a different map. The gloomy climate and the shades of gray present they faithfully reflect what the climate was perceived along the eastern border between the Reich and the Soviet Union. The isometric camera guarantees the player an excellent view, allowing you to observe all enemies at a short distance thanks to the various zoom levels. 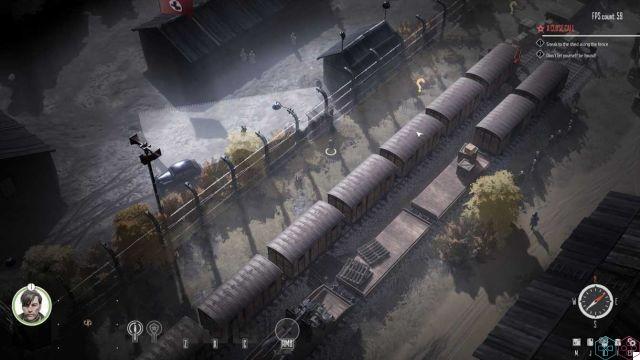 The stealth mode of the characters is automatic and makes it easier to understand when we are in the vicinity of some troop of the SS. During the game we will play the role of various partisans, each characterized by special abilities. The skill trees they will be equipped with will also be important. Before spending our skill point we will have to think carefully.

Getting the experience to farm skill points won't be easy. We will have to complete the various missions, not exactly simple, kill our enemies or complete tasks in our base camp. The latter is none other than the place where all our partisans are located. Here it will be possible to carry out procurement missions to ensure a continuous flow of food and ammunition or special missions such as propaganda, and many others, which will increase the morale and experience points of the agents involved.


I really appreciated the choice of inserting a base camp in which to be able to "rest" between one mission and another. In addition to being able to breathe and reorganize in case of need, this mode brings the game even closer to reality. Let's face it, even the partisans needed to pull the plug between one Nazi gunshot and the next. Furthermore, the setting of the same field is well taken care of in the smallest details with some structures hidden under the ground to avoid being spotted from above. 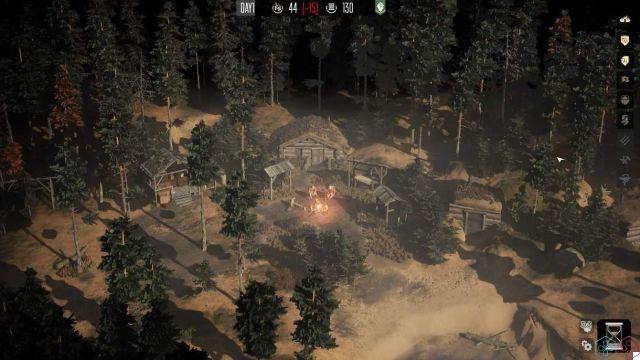 All these dynamics typical of stealth and survival games have a meeting point in Partisans 1941 which is precisely the action. Knowing how to connect these mechanics will help you a lot during missions, in which you will have to use your wit to be able to continue unharmed. Choosing an alternative path instead of another, deciding to execute a kill with the knife or with a grenade will be just some of the aspects that will change the course of a fight.

Obviously, being fewer than the opponents, it is appropriate to think that the best tactic is the most silent one. However, sometimes it will be the other way around. In fact, you can draw the opponent's fire at a point while your agent acts behind the enemy, or simply eliminate as many opponents as possible with a grenade risking being targeted by their companions.

Choosing the right path and tactics won't always be easy. Building the whole attack phase is more complex than one might think. Choosing a shelter and waiting for the right moment is only one of the phases of action. With action started, the "tactical break”Can make us buy some time to change our approach, perhaps by choosing a different shelter. However this it's not a real break. Time, and consequently the action, will continue to flow, albeit very slowly.

You will therefore always have to pay close attention to starting a fight, because once it starts it will not be possible to stop it. And this is precisely one of the points in favor that I would like to emphasize in this review on Partisans 1941. This game pushes you a lot to think and try to "predict" the possible consequences that your action causes. If you can imagine how the battle will continue, in fact, you will be able to limit the damage suffered by your partisans. 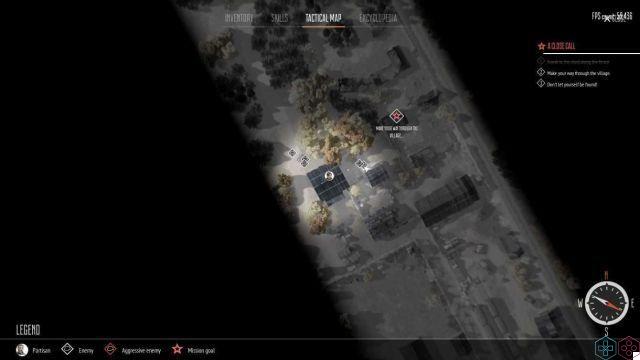 While it is therefore a good mix of playing styles well done, the developers have managed to make this game a gem also for the eyes. The environments of the eastern front find justice in their representation. Even the choice of wanting to adopt colors on the shade of gray makes us understand well the sense of difficulty and oppression that many people experienced in those years.

The models of trees, units and buildings are well cared for. It is true, there is not a great diversity among the latter, however, as they say, better few but good. Even the ambient sounds and those of the special effects turn out to be well represented even if they are not really faithful.

The various game menus are also well organized minimal but complete at the same time. Clean and elegant, allow the user a good gaming experience, facilitating the experience even for users not accustomed to this genre of games.

However, although it is such a well-structured game, there are also some small problems, not so much related to the stability of the title, but to some very specific actions of the characters. When we go to click on some object to retrieve its contents or maybe when we open a door, the character will approach, but will not perform the action. This is disadvantageous, especially if we have to carry a body to hide it with little time available. 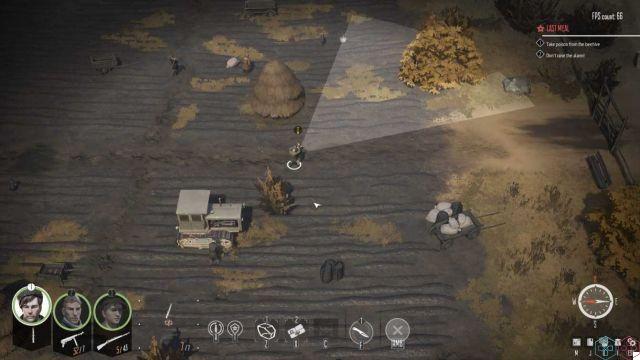 We are reaching the end of this review on Partisans 1941 and it is time to take stock. The title developed by Alter Games and published by Daedalic Entertainment looks like a successful mix of genres which will keep the player glued to the screen for hours. The setting and mechanics have been flawlessly developed, guaranteeing various approaches to missions.

Also the difficulty is well balanced, guaranteeing even at the easiest level a constant commitment so as not to ruin the mission. The layout and arrangement of the controls are simple and intuitive even for those approaching this type of games for the first time. Planning every move will certainly be the winning card, but not always everything will go as you expected.

Much appreciated is the diversification of the characters that depending on their abilities they are able to perform different tasks. In this way you do not risk using only one character, but it will take a good elaboration of the plan to succeed in what you have set for yourself.

However, such a demanding title cannot fail to have problems. The first note that makes you turn up your nose is definitely the loot system. Being random, if you reload the game for various reasons, by killing an enemy or looking for some crate you will never find the same loot as before. While there is nothing wrong with that (it ultimately makes the game more fun) it is not possible that the first time you will find, for example, 10 items and the next time none. The same can also happen vice versa. 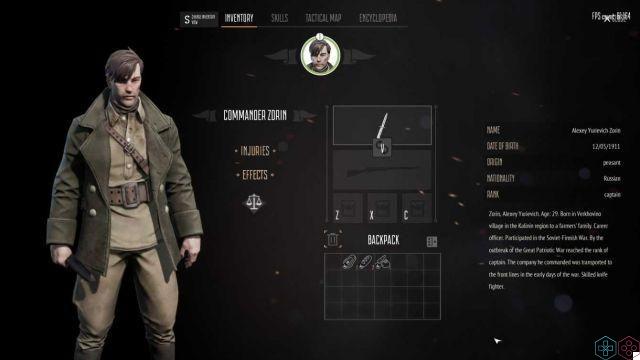 To this small problem is added a well-kept audio sector, but with sounds that are not exactly faithful to the original ones and small problems related to the actions that our partisans can perform on the map. Last but not least, there is the absence of the Spanish language. By now we are used to not having it in “less important” games, but the absence is even heavier since the title supports less spoken languages ​​such as Czech and Hungarian.

A real shame for a title that promised so much and that instead sees its price drop due to these small inaccuracies. That's all for this review on Partisans 1941. We remind you that the game is available on PC via Steam at the recommended price of € 29,99 with a small discount on the occasion of the exit. In order not to miss further news and reviews regarding the videogame universe, keep following the pages of techigames!

add a comment of Partisans 1941 review: the war experienced by the Resistance