Ori And The Blind Forest Review: A really deep platformer

The review of Ori And The Blind Forest, a very deep platformer. Whether we are talking about mechanics or purely history, it has nothing to envy to titles of a different nature

When it comes to platforming, the titles that immediately come to mind are the great classics Nintendo like Super Mario o Donkey Kong and, if we move to the other platforms, how not to mention Rayman e Tomby. In short, titles that are undoubtedly valid, fun and sophisticated, but which have lightness as the "only common denominator". obviously a "light" title is not a bad title, it is simply easily assimilated and certainly not endowed with a plot full of twists or upheavals (in short, we have been going from castle to castle to look for Peach for twenty years). Ori And The Blind Forest it is all that a platformer should be but it is also strong with a deep, sad and intrinsic plot of emotions, capable of making even the coldest of players fall apart.

In titles of this mold the plot is often underestimated, a pretext is offered to the player to continue to advance: the rescue of a princess or our world threatened by the villain of the moment. Ori is also different in this respect

Ori And The Blind Forest boasts a respectable plot that is pitted with an off-screen narrative, able to add a touch of mystery and depth that knows how to break through the emotions of each player. Ori he is a guardian spirit of the forest removed from his habitat by a strong storm, the little one is picked up by a strange being who looks after him and the two grow up as mother and son and, their bond seems the most sincere and beautiful there can be in nature. Unfortunately after yet another misfortune Ori he finds himself alone again orphaned and hopeless, the game begins like this and the story is enriched with details during our journey. As mentioned before, generally the plattforms do not boast an articulated plot, Ori And The Blind Forest unlike it deals with mature topics and does it in an excellent way.


I don't want to give you any more information on the plot, what you have just read is part of the prologue. I leave you the sweet or bitter surprise of the events that follow. 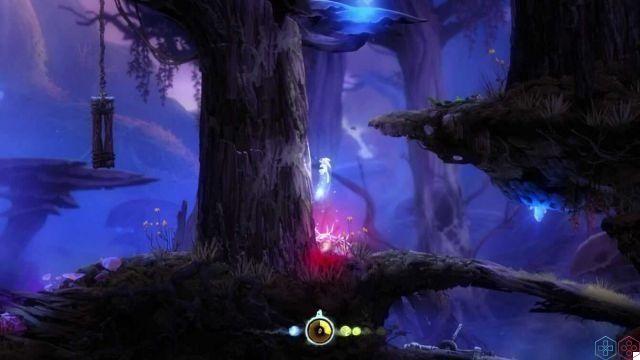 Although not fundamental in a game of this mold, the graphic aspect has a clear and decisive influence on the world designed by Moon Studios with unforgettable lighting effects and backdrops.

In a platform, the graphic aspect often takes a back seat to leave room for level design and the care of the maps, in Ori all this does not happen, or rather the roots of the type of game remain strong. The portions of the map are studied in detail but the graphic rendering is excellent with light effects that are nothing short of spectacular, the colors that draw the world of the forest are in continuous contrast. Although you find yourself in a dark and inhospitable world, you come across colors with electric shades that know how to revive the game world. Each action is a bearer of light, whether it is the recovery of a little life or a few experience points, even the enemy attacks are spectacular and lively.

Ori In The Blind Forest it is a riot of colors capable of dancing on the screen without ever bothering the player, everything is then seasoned with animated backdrops that are able to kidnap the player and convince him to have always lived in that world. Each color is the bearer of an immediate truth: purple capable of indicating a part not to be walked on, green symbol of bonus life or even blue that indicates the rescue spheres. In short, the game speaks even when it says nothing, indicates without pointing and accompanies without needing to do so.

The animations, such as jumping or climbing, are very accurate and make everything even more enjoyable. Good also the general graphic rendering and the arrangement of the lights that help the atmosphere. 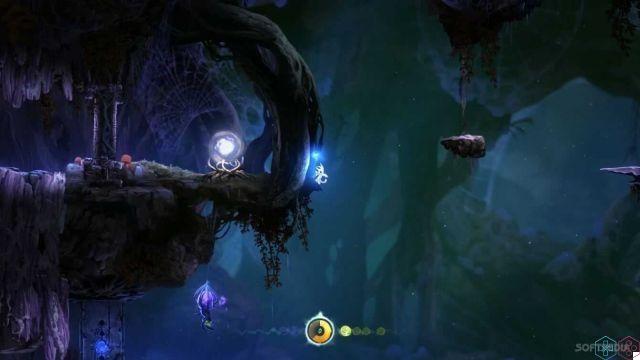 The gameplay of Ori And The Blind Forest is as deep as its other aspects, with features not expected from a platforming game.

Generally the main mechanics of a platform game are limited to jumping over the opponents or hitting them to move forward in the game, in this title everything is raised to the nth degree. Not only will we be able to launch beams of light to take down our enemies but we will also have a skill tree that will make it possible to choose a different approach for each player. You will be able to choose a more defensive line by adding an extra hit to the life bar, so you can receive more damage, or even enhance our offense skills, to do more damage faster, or even breathe under the water. The possibilities offered are truly endless and by the end of the game not even half of them will be unlocked.

The game has autosave points very far from each other, but we will have the possibility to save our game manually whenever the desire or the opportunity presents itself. Obviously, provided you have a rescue sphere, which, however, must be used sparingly as the same sphere will also serve to create a more powerful attack than usual, to overcome certain parts of the map or to open certain doors. In short, the spheres and bailouts will be handled very carefully.


Back-tracking is a present and necessary element in Ori, as once the various upgrades have been unlocked along our journey, we will often be forced to retrace our steps in order to continue. There will be the concrete possibility of arriving at a given point on the map where there is no way to continue at that point, retracing one's steps, it will be discovered that a portion of the map, which was believed to have been properly combed, hides parts that are not they were shown earlier due to the lack of a newly acquired skill. 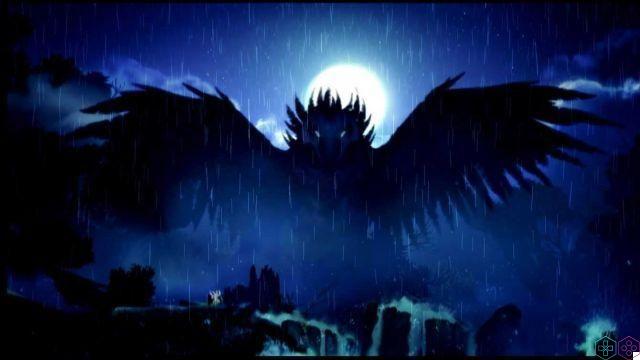 I thought that platformers were now a good memory of the past but, thanks to this beautiful title, I rediscovered a type of video game reinterpreted in a spectacular way

In conclusion Ori In The Blind Forest is capable of rewriting the rules of the platformers in a suggestive and exciting way. Not only is the technical level very high, even the gameplay and the level design of the maps are elements taken care of in a decidedly excellent way. The title also boasts a plot which, although not incisive in every point, is told in an original and effective way. I recommend the title to all lovers of platformers, good stories and challenges because the title is very demanding at times.

Ori In The Blind Forest is able to rewrite the rules of the platformers in a suggestive and exciting way.

Outcast Review - Second Contact: Mistakes from the Past ❯

add a comment of Ori And The Blind Forest Review: A really deep platformer