Have you ever put on paper, in words, pencil sketches or musical notes, an'idea that lay ahead in your mind tempting but that upon the proof of the facts, once translated from thought to tangible fact, it appeared unrecognizable? In video games, this bewildering dynamic occurs quite often. They themselves are in fact the result of creative processes in which ideas become concepts and concepts become alpha, beta versions and so on.

We placed this preamble here at the beginning of this review of Orangeblood for a reason. It seems, in fact, that in the development of the game in question it seems to have happened precisely this phenomenon that we have mentioned. An idea turned into a concept and the concept into a videogame product. The problem is that every step, in this case, happened in a way questionable. We will try to explain why in the following paragraphs.

Orangeblood is the indie fruit of a small Japanese software house, Grayfax Software. Active Gaming Media, the publisher, presented it during the BitSummit 7 Spirits. This is an event that was held in June last year in the evocative setting of the Kyoto International Exhibition Hall. Active Gaming is a rather well-known developer in Japan based in ad Osaka. All this to tell you that Orangeblood is born, feeds (and perhaps also dies) in the context of the cultural reality of terra del sol raise.

The game oozes Japanese essence in many of its components. From the setting that seems to make a mockery of the chaotic Akihabara, apart from the visual component in anime sauce up to the genre itself of the title: a j-rpg a turni strictly non-strategic. For years, in fact, part of the Japanese videogame expression, since the remote releases of the first Dragon Quest (1986) and the first Final Fantasy (1987), has been synonymous with turn-based role playing.

So Grayfax takes up all the leftovers of this mammoth videogame banquet, creates a new dish for us and trims it heated to the least worst possible way. The game, after an awkward postponement nominally aimed "at obtaining the highest quality standards", debuted on January 14 on Steam and the first of this month on consul. We had the opportunity to try Orangeblood on Switch and, by continuing to read this review, you will soon know how it went. 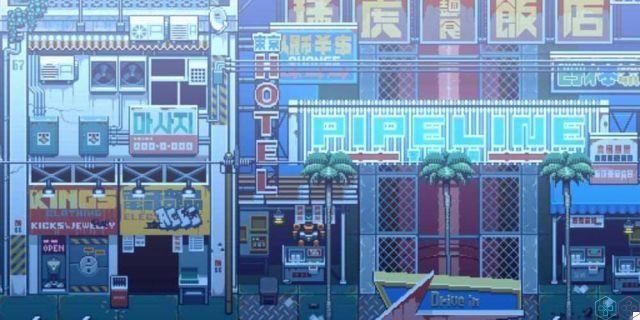 A long time ago there were the nineties. Just in that period Orangeblood takes place. Or rather, Orangeblood takes place in one alternative version of the nineties, because then there were certainly no propulsion cars speeding through the skies or quadruped cyborgs grazing happily in the streets. Except for such trifles, the reality of Orangeblood is more or less one in which the Spice Girls were demi-gods and the Tamagotchi was the novelty of the moment.

Al largo di Okinawa, New Goat, an artificial island half exotic and half disreputable peripheral suburbs, is the scene of the raids of Vannilla. This is a very foul-mouthed, irascible and very tough girl who in a somewhat incomprehensible way is framed by the CIA. The protagonist is therefore forced to carry out various missions in the place of the American federal agency.

In New Koza, the girl receives her first assignment grungy quest. He will have to eliminate a local underworld boss. By way of sideways Vanilla gets to know Machiko, a girl exactly like her, except for her much more polite, sweet and dreamy ways. The girl is a young girl Dj of the place and, with the excuse of music, Vanilla manages to infiltrate Machiko and herself in the club run by the boss and eliminate the latter. If so to the eye all this you know a bit 'of B-movie you saw it right.


We do not anticipate anything of the rest of the story, not so much to avoid ruining that little bit of surprise, but rather because it would be really difficult to try to reconstruct it so much it is weather in pasticciata the same. In fact, between one adventures and another, it will happen all too often to you losing the narrative orientation in the enormous pandemonium scripted by Grayfax. First you go one way, then the other and then another again, wondering all the time because.

Accomplice of this bedlam i dialogues that touch in flashes an incomprehensibility almost arcane. For a sort of creative whim, in fact, the software house has decided to characterize the language of the characters with a surreal amount of street jargon, insults, foul language, nonsense jokes, puns and so on. This, as the only consequence, has that of drowning the logical-narrative thread of the story.

To enjoy all this chaos, you will only have Simplified Chinese, Japanese or English at your disposal. In short, we can guarantee you that keeping up with the story of Orangeblood will not be a joke. The only vaguely passable thing characterization of the characters. Vanilla and Machiko together work discreetly and the developers have somehow managed to get their personality through. The review continues with the gameplay elements of Orangeblood. 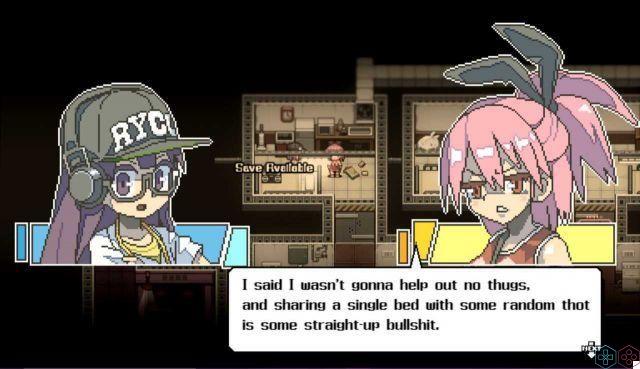 I thought I saw a j-rpg - Orangeblood Review: Japanese pie

In terms of gameplay they are not reported noteworthy surprises. If you know how the turn-based rpg then you will automatically know how Orangeblood works. Essentially, your party characters will move around the New Koza overworld. In some areas of the city, like a dungeon, you will come across enemy sprites. Once they have glimpsed you, the villains will punctually sling against you. We will then move from the overworld to the battle screen (exactly, as in Pokémon, Dragon Quest, Shin Megami Tensei, Chrono Trigger and so on and so forth).


In battle, during your turn you can decide whether attack, use a skill, or return to the overworld. The only variation on the theme, in this case, is that your characters will always use to fight Weapons. This implies that your shots will be limited based on the number of ammo you have available. Some turns, therefore, you will have to pass them to reload your weapons if you don't like the idea of ​​the game over screen. Abilities consist of overly deadly repeating hits or various buffs.

The main problem with this type of approach is that in confrontations it will only rarely be necessary plan wisely the various moves. Most of the time the villains are simple sacrificial victims only useful to make you level. Bosses, on the other hand, are insidious only by virtue of the fact that they have a high level and not because they are able to implement particular attack strategies. It goes without saying that the gaming experience will most often result in a staid grinding and tedious. The only point in favor, the fights are generally fast, 2 or 3 turns on average.

This gaming system is furthermore undermined by programming choices villains. The management of the escape mechanics from the clashes, for example, it is incomprehensible. It will happen that you interrupt a fight and return to the overworld. Returning to the latter you will magically find the villain you thought you just got out of the way. This will throw itself at you again, re-triggering the battle and so on indefinitely in one loop diabolico. Let's now see some side aspects of gameplay in the next lines of this Orangeblood review. 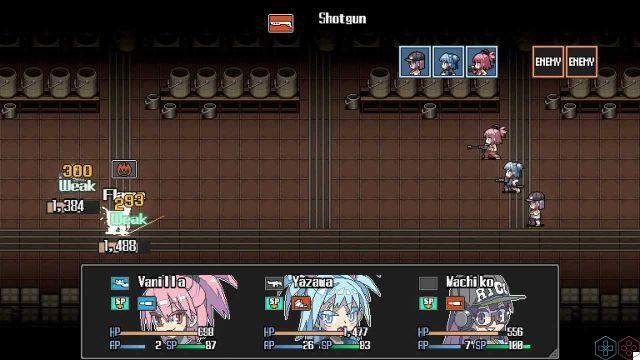 We have mentioned in the course of this review theoverworld of Orangeblood which surrounds the various shift shootings. This overworld needs further examination. The way this game world is managed represents a impediment the general enjoyment of the title.

The overworld, in its entirety confusion crammed with floors arranged one above the other, it is decidedly difficult to decipher to the eye. In fact, the characters move through extremely twisted streets and tunnels. Very often the view of them will be covered by some other road overlapping. In short, what we want to say is that the game world seemed to us very little compatible with the bird's eye view and the2D optics with which the title is conceived. The minute characters will often escape your gaze hidden by all the tangle of signs and signs that crowd New Koza.

A few words also about programming. A particular kind of catch will be ready to compromise your gaming experience. Moving through game inventories or moving from one zone to another in the overworld will trigger gods very short freezes of the game. As if the engine were to take a few moments to load. In short, everything will become pauses and silences not even if it were a concert by Molleilato. Even in this case, this is an inconvenience attributable to extremely programming disappointing. 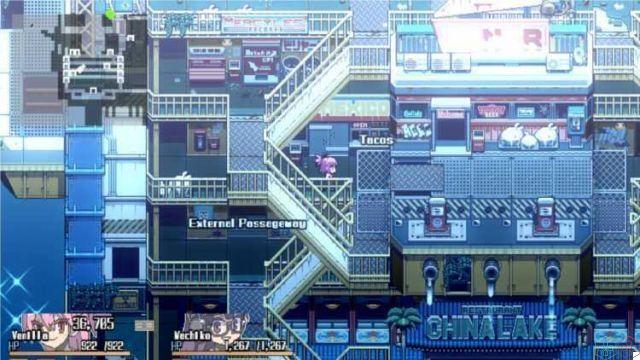 The technical dimension in which Orangeblood moves is that of a retro rpg. We try to emulate the aesthetic appeal of the graphics of the era of the various Super Nes, Mame and Neo Geo and many other platforms that have made the fortune of 2D. Also here the premise is good and right, but the results are fluctuating. The best part of the title is shown in the sprites that appear in the dialogues and on the main game screen. Here the characters are designed in an appreciable way with the most classic of anime aesthetic approaches. To underline even further the retro appearance, the figures, in these situations, even appear outlined with grainy outlines. Almost to simulate a very low resolution.

The overworld, we have said, is definitely cluttered with details. These are also satisfactorily made. The interior of the various dungeons and many environments, however, it is bare and really neglected. Terrible is the battle screen and the super deformed sprites of the characters. Everything is really modest, superficial and badly styled. As if that weren't enough, in some specific situations, the game will apply purple or orange filters to the entire overworld. These are really clumsy choices that only increase the impression of being suspended in a 16 bit incubation.

The compartment audio, although there were the prerogatives to musically recreate the 90's dance atmosphere, it fails to do so. Tedious and serial motives in abundance they will be the soundtrack of your frustrating gaming sessions. Let us now hint at a brief conclusion for this Orangeblood review. 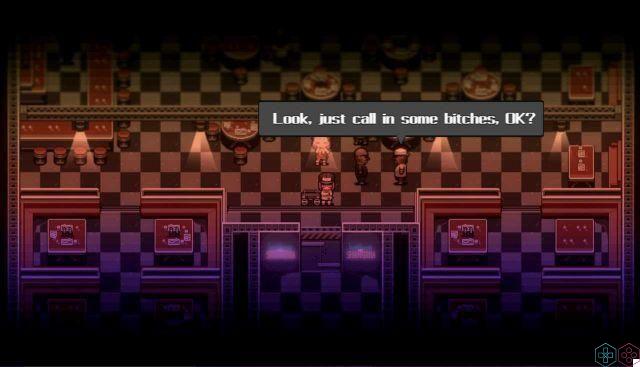 Without head or tail

We can safely reconnect to the speech made at the beginning. Orangeblood's idea sounded good. We wanted to propose a turn-based rpg set in a futuristic alternative past in which girls fight against a pseudo-Yakuza. There was an opportunity to grasp the spirit of the Years' 90 and bring it back in a fresh and fun way to today's gamers. The concept, unfortunately, turned into a virtually indecipherable title. To translate the idea into play, we have thought of various very unhappy programming choices.

The only real lord of New Koza appears to be the chaos that dominates in production. The title is confusing, from the plot, to the dialogues, to the overworld. The turn-based gameplay is presented in a tedious way and lacking in real depth. Too tremendously similar to the shapeless mass of jrpgs struggling to match the results of the titles that made the genre's fortune. The introduction of the bullet reloading mechanics is worthless. That being the case, we can do nothing but advise against it.

Thank you for taking the time to read this Orangeblood review. Stay tuned to techigames for all the news and curiosities from the world of gaming and beyond.

Review Ori and the Will of the Wisps: un ritorno spettacolare ❯