The kickstart of Not The End has started in these hours, a role-playing game in which the heroes will be willing to play everything to achieve their goal. Let's see what it is!

Fumble GDR, independent publishing house already present on the market with products such as Gattai! and Klothos has just started the Kickstart of Not The End, their next product. The game does not have a pre-established setting, but can adapt to any type of setting, from medieval to noir to science fiction.

The game is based on the engine called HexSys which does not involve the use of dice, but of colored tokens to represent successes and failures. With it, every test that the character performs will affect the game world and the story, making the effects of every decision unexpected.

The HexSys seems to propose a strongly narrative system, with each character defined by a series of adjectives arranged in a hexagonal composition. These adjectives are then connected to each other and it is these connections that define the main traits of each character. 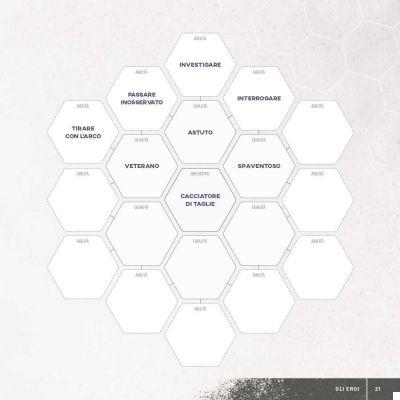 Particularly interesting seems to be the evolution mechanics of the hero, with specific rules for events that change and make our character's character and behavior evolve.. When and how to trigger these events will be a decision that the player himself will have to make, again underlining the strong narrative component of the product.

Note of merit goes to the drawings and layout, despite the relatively little shown, already demonstrate a very high quality.

The Not the End kickstart campaign began on January 21 and in just under 48 hours it has already reached the considerable figure of 21.000 euros; more than tripling the amount requested at the start and already unlocking countless strechgoals.


Not The End's release date is scheduled for April this year, we just have to wait for its release, test it and review it.


If this news intrigued you, and you would like to try the game, a quickstart is available on the Not The End kickstart page reachable at this address.

add a comment of Not The End kickstart has arrived