Noahmund takes us to a world torn and worn by war: here is the review of this indie RPG

In today's review we will talk about Noahmund, Indie RPG conceived and developed by Open Study, Spanish development team based in Malaga and sponsored by Square Enix Collective. It is currently available on Steam for € 19,99 in Spanish (original language) and translated into English and Japanese.

Every self-respecting RPG makes the plot its strong point. An articulated and well-developed story, along with charismatic and fascinating characters, is the basis of any successful title and one of the main reasons for buying. Estudio Ábrego certainly focused on this point while developing Noahmund, and managed to give us an exciting and articulated story. We are captured in a world rich in history and culture; the characters each have their own pasts and personalities, and interact with each other with a great sense of humor.

At the beginning, however, we seem to be thrown by arrogance into a world full of names and notions that are neither explained nor explored. The game starts with a tutorial (practically the only one in the whole game) in which we are explained which key to press to use the skill synchronism; but we are not told exactly what it is, what it is for or why it is important. 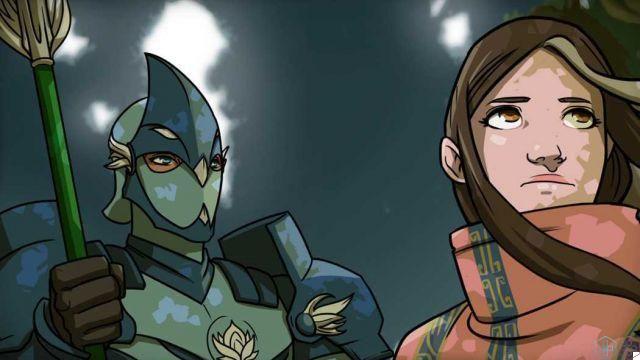 Likewise, we know that one of the main points of the plot is war and we are bombarded with names and titles without receiving any explanation. We are told who is at war and why only after a few hours of play. We understand that North and South are fighting, two countries in some way rival and consecrated and two opposite elements, fire and water. But we fail to understand well whether the fighters are two nations, two cities or groups of people. Is the inner world at war? Only a part? Are there alliances between the kingdoms? We only get answers after hours of contenting ourselves with being good versus bad.

Visually Noahmund is not bad. Some textures are less curated than many others and won't win prizes for graphics, but landscapes and settings are pleasant to look at and well cared for, especially in the choice of colors. Obviously it cannot be compared with triple A titles, but being the first attempt at an indie studio it is more than positive. The polygonal models of the characters and the animations are done quite well, but the faces are definitely not acceptable. The features are completely squashed and two-dimensional, mortified by a bad camera angle. Overall they give the impression of having been added by hand at a later time.

If the graphics sector is not particularly exciting, the sound is magnificent. The effects are well balanced and never annoying, but the strongest point is the music, able to excite and give goosebumps in more than a moment. Hats off to the singer and to all the Estudio Ábrego team. 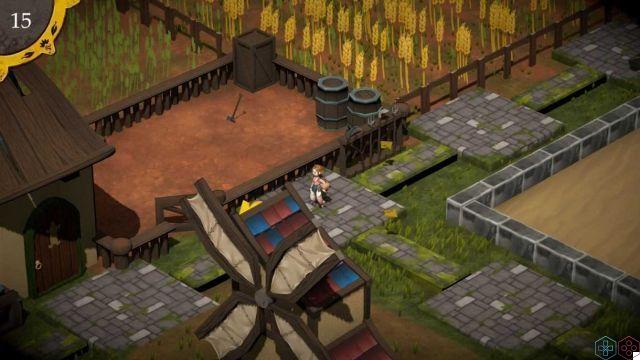 Noahmund is based on a particular type of gameplay that the developers have called Motion Battle Chess. Combat is developed on a board like many JRPGs, but eliminates turn-based combat to make it more dynamic. Knowing how to move well on the board will be essential to better study combat strategies, plan attacks and dodge enemy shots.

Estudio Ábrego had dynamism in mind also in the management of the characters. It is usually possible to pause and switch to the command of another party member, while here we should juggle our three heroes and their abilities without having the opportunity to stop the game, in order to have a particularly lively and realistic combat. Often switching from one character to another can be a risky maneuver, the AI ​​will not always be in our favor and the protagonists always tend to throw themselves at enemies without any defensive approach. The fights present a nice level of challenge, which is dampened somewhat by the miraculous synchronism of Galina, which allows us to heal allies and kill enemies by simply pressing a button. 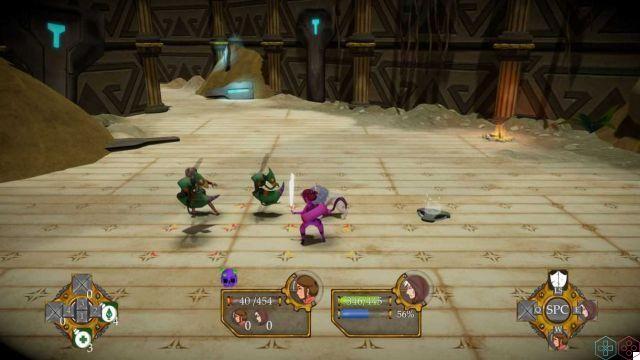 The level of challenge is increased by the rescue system: we do not have the possibility to save when it suits us, but only in certain areas where we could regain our energy, save and "visit Shinn" to buy objects and weapons useful for our adventure. . So we have to carefully plan our every move in a labyrinthine and articulated map. Another small problem is that we are completely left to ourselves. We are not given any directions, the skills of other players or how to juggle the interface are not explained, nor are we given any help on where to go or the direction to take, and often we would have to turn a long time before finding the right direction.

Overall, Noahmund is a good project, but at the moment it's not quite done yet. The translation from Spanish to English is not complete, often has errors or is even inconsistent. By pausing during a fight, the keys to resume and return to the main menu were reversed. Furthermore, many dialogues appear only in the original language and entire conversations are only a succession of empty boxes, making us lose important information to continue in the mission and in the plot. Worse still, the game has several crippling bugs that make it difficult to finish. The characters freeze in the middle of the dialogues, freeze inside the rooms and mysteriously multiply during the fights and then get stuck together. As if that wasn't enough just before the end the system simply refused to save, forcing me to repeat the same sequence more than once.

add a comment of Noahmund review: the GDR directly from Spain