Nintendo Labo is the first real flagship title of 2018 for Nintendo Switch: an ambitious project, on which the Big N seems to be focusing very much. But will Nintendo Labo really be able to get us to pick up the Nintendo Switch after the torpor of the first months of the year? And above all, is it really as brilliant an idea as it looks on paper? Let's find out together in this review

Nintendo Labo it is not a simple product to review, it was understood in the material made available by Nintendo in recent months. First of all because we are yes in the videogames field, but Nintendo Labo is not a video game as we usually think of them: it is something that goes beyond, which wants to propose a completely new philosophy and approach. The second problem is related to the target audience: in the evaluation of Labo, we certainly cannot help but consider that it is a game for Nintendo Switch, the latest and famous console from the Kyoto House. Nintendo Switch it is certainly not designed for children, being an expensive and fragile jewel. But Nintendo Labo, on the other hand, who is it for? Are we really sure that adults are the recipients?

In recent weeks, Nintendo seems to have made efforts to prove the exact opposite. There were TV commercials (and on the net) showing reactions of children struggling with Nintendo Lab. Children, not adults. At the same time, in recent events open to the press and the public, the recurring terms in the presentation have been over and over again "family" and "children". But how the heck should a child do to program a software that is at times very deep like that of Nintendo Lab Garage? And how should you remove the extremely expensive cardboard shapes contained in the Nintendo Labo package from the base? Here we begin to understand that Nintendo Labo and Nintendo Switch have come together to offer a new type of game, extremely suitable for the youngest ... but without neglecting the decisive presence of adults.

We are perhaps facing the first, real title clearly capable of uniting adults and children also for Nintendo Switch, as it was in its day with NintendoWii? Since that first time with Wii Sport the miracle has never happened again, but yes, Nintendo Labo aims precisely at this goal. And it does it in a completely new way, just to stay in tune with the famous and prestigious originality made in Nintendo.

Nintendo Labo is offered on Nintendo Switch in two very different versions: the first is the Nintendo Labo Variety Kit (the one we tried for the review), the second the Nintendo Labo Kit Robot. The former allows you to build a variety of items and gear, and offers the player a fair number of minigames related to them; otherwise, the Robot Kit is all about assembling a sort of backpack with a visor in the living room, to then take on the in-game role of a gigantic mecha.

The difference is also visible in the price, which represents the first real problem of Nintendo Labo in general: 70 euros for the Variety Kit is a high sum, 80 euros for the Robot Kit simply exaggerated. Let us remember that apart from the “novelty factor”, and guaranteed fun, both packages they offer a pile of cardboard and a game board, and the latter's software is nowhere near as deep as Nintendo's usual Triple A's.


Pack of Nintendo Labo Variety Kit in hand, it's time to improvise artisans in our workshop: the table in the living room has lent itself perfectly to the purpose. Inside the package the cardboard "cards" containing the assemblable components of Nintendo Labo are arranged in neat order: our aim, even before fitting them together, is to gently separate them from the motherboard, because there is a serious risk that some parts or more delicate edges tear. In general, however, even though they are mass-produced, the quality of the cardboard and its resistance seemed to us discreet, especially considering that later Nintendo will release the projects to get us any spare parts. This obviously does not mean that you should leave your children alone with the Nintendo Labo, especially if at an early age: they would probably put it in their mouth with disastrous results. 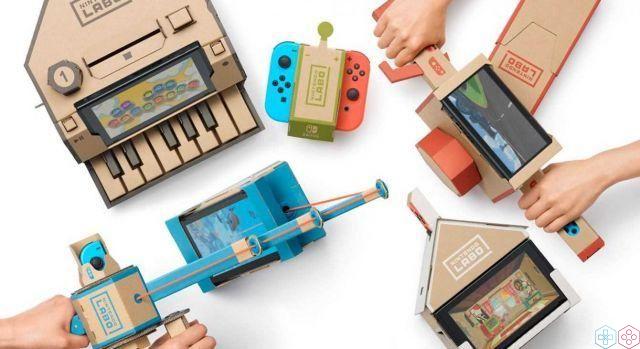 The complete absence of any instruction booklet is surprising: it would have been right to insert them without assuming the presence of Nintendo Switch even in the assembly phase. How then do you assemble the various objects of the Nintendo Labo Variety Kit? Following the instructions reported on Labo's application of the hybrid console, a mode practically identical to that adopted by Lego Dimensions. The instruction booklet thus ends up digitized on the screen, also saving on production costs. This is not a movie that we have to pause every time to keep up, but a real software to which we must confirm our progress in the course of work. Made, of course, with classic Nintendo sympathy, bright colors and original ideas along the way.

Nintendo Labo it is a product for families, and who is reluctant to admit it realizes it in the assembly phase. Separate the pieces to be assembled, follow the instructions on the screen, intervene where necessary with a rubber band, these are not too simple tasks for children, especially when dealing with delicate material. Once the construction of the various objects available in the Nintendo Labo Variety Kit it's time to switch to the actual video game; we remind you that this package allows you to build and arrange next to each other a piano, a motorcycle, a fishing rod, a radio-controlled toy car and a house. All in the name of variety, in fact. You can also buy special stickers to personalize our creations, they are already available on Amazon and should also be in stores.

But let's get to the actual video game, leaving aside the long and laborious Ikea-style construction project. Each of the tools in the Nintendo Labo Variety Kit has its own little dedicated title, a sort of more or less profound mini-game that allows you to show the versatility of the object you have finished building; or even just to highlight the potential of the idea behind Labo. In all this it is good to remember that the Joy Cons are fundamental: without Joy Con you cannot face the various mini games, since it is precisely the complex system of vibrations, calibrations and remote controls of them through the software on Nintendo Switch that allow to play. 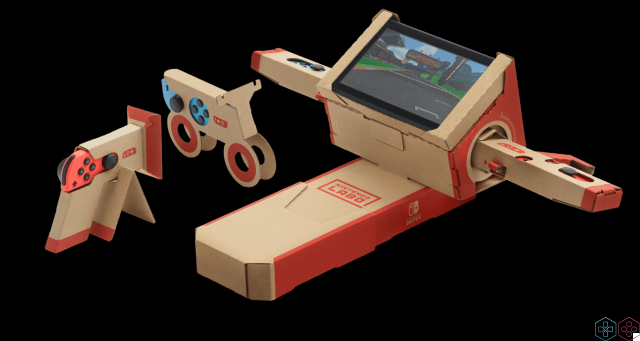 The experiences made by Nintendo show all their limits if you are an elderly gamer. As for adults, Nintendo Labo manages to entertain for a couple of hours: time to understand how the controls work and how the various constructions are used, but then it is difficult not to be placed in a corner and forgotten. For children, however, it is profoundly different, and each of the small but original titles proposed will be able to entertain them much longer. There is the little house inhabited by a funny little creature that we have to look after, and with which we can interact in many ways: connected to the special cardboard plungers to the Nintendo Switch coating it is possible to change the gravity inside the house, fill it with water or even create openings Portal style and let the pet travel.

The minigame with the fishing pole it is just as fun, even for an adult: among other things there is a challenge that requires you to fish all the marine specimens available, a task that is not very simple and able to commit ourselves for a few hours. The piano with customizable melodies based on cardboard “keys” to be connected, it shows all the potential of Nintendo Labo, but it is a digital workshop rather than a real game; the motorcycle is completely different, with challenges in time trials or against other opponents controlled by artificial intelligence. The real limit of all these offers is their extremely small size, a little more advanced than a demo ... but the rest of the goal of Nintendo Labo is not to propose a title as profound as the Triple A that we know well.

The verdict of the review - Nintendo Labo Review

Nintendo Labo is much more than a simple video game: it is an unprecedented experience, conceived and created with the usual mix of Nintendo's genius and courage. This is something truly innovative, which once again shines the spotlight on the console of the moment, Nintendo Switch. If you have children, or inside you are still 10 years old (not a defect at all) Nintendo Labo can seriously captivate you with all its magic, whether you go to the Variety Kit or to the Robot Kit. But keep in mind the two fundamental problems of the entire package: the high cost, because we are still talking about cardboard cards to be cut, and the extremely limited nature of the "video game itself". But who knows, Nintendo Labo has just arrived. There are so many interesting ideas to continue to exploit it, and the real limit is only our imagination.

add a comment of Nintendo Labo Review: Perfect for the Whole Family?