Housemarque returns, following the development of Resogun and Alienation, with a new title for PlayStation 4 full of adrenaline and challenge. Nex Machina is a twin-stick shooter that brings back the style of the Finnish house, lots of action of movement, open fire and total destruction, with some challenges to complete

Resogun was launched exclusively on PlayStation 4 in 2013, as part of the launch line-up of the new Sony home console. It was one shooter twin-stick where a spaceship was piloted and the goal was to free entire worlds from an alien invasion. Well, if you've played Resogun, some of the mechanics of Nex Machine, the new title of Housemarque coming only on PS4 e PC. Read our review to understand what awaits you in Nex Machine.

There is no real narrative in Nex Machine, but a light layer of alibi to move the entire cross-country adventure. We are in a period far ahead of the present day, a crazy engineer at the head of the LiveCorps has built some very advanced War machines to take man out of battle and save lives. The ambition is noble, but some accidents along the way endanger the whole of humanity: the machines, for unknown reasons, begin to go crazy e attack humans, destroying cities and enslaving humanity.

This is where ours comes into play hero, with the specific goal of save humans and destroy the Premium, the mother machine that moves all the other robots. The adventure is divided into five locations e one of the sore points of the production is theirs shortage. However, despite being few, the locations are a lot intense and full of action heart-pounding.


Run and shoot, these are the prerogatives of Nex Machina

Il gameplay is typical of a classic twin-stick shooter: avoid the enemies but in the meantime also shoot to curb their advance towards our position. Every level is articulated in various phases, starting from the easiest one up to the final boss fight. In the course of the level we will find waves of enemies infinite that we will have to defeat and to help us there will be the various bonus featured on the map, from the pink weapon to special abilities such as laser, smart bomb, protective shield, etc. Obviously such bonus they are permanent until death and the character has at his disposal five lives, where until the last one it will be possible to start again from checkpoint closer.

Once all lives are consumed, it will be there post a choice: we can continue the game by spending the points collected in battle, or finish the level immediately and keep the points earned by repeating all over again. There are multiple modes with which it is possible to face the various levels: that a single world, in which you will be able to face a single level and the arcade mode, which looks like a run without pauses towards the last level. The variety of modes is not the best, certainly the developers could do more on this juncture to make the experience more varied. 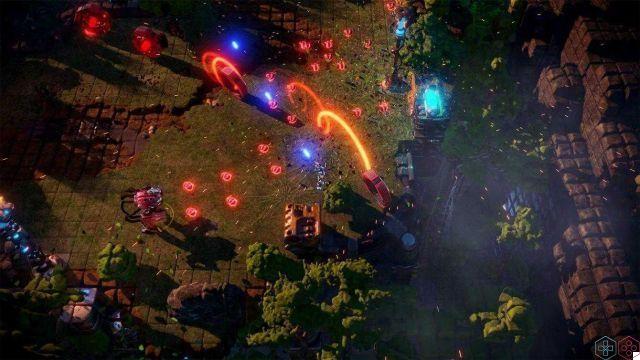 Lo graphic style remains the peculiar one of Housemarque, if you have played a Resogun you will recognize it immediately. We tried the version PlayStation 4 of the game and it seems to us that it behaves well. Many details on screen in the most intense shootings, particles of the enemies that flutter in the air and the cyberpunk environments fascinating eye-catchers.

Another successful aspect of Nex Machine it is really the technical sector. The version PS4 does not suffer from framerate drops, the game runs at 1080p and stabilizes on 60 frames. THE enemy models are well varied, from the simple roaring infantryman to the absolute prime master, the texture are well definite and settings very various, from the futuristic forest to the typical ultra-advanced city. We did not find any major flaws on the technical side, quite the contrary. The mastery of Housemarque to hardware PlayStation always leaves you speechless.

Il sonoro give away good satisfactions, with delle techno music well hit at the right time e gunshots plasma of very realistic robots. In conclusion, Nex Machine it is a production indie particular, developed by an equally particular team, but unfortunately not poor in defects.

7 An appreciable title, with some flaws

Nioh review, the "souls like" of Team Ninja ❯