Simple rules, play on the edge of the absurd: this is Munchkin, the paradoxical card game of which Techigames brings you the review today!

Late summer 2004, I was 17 and a close friend from high school revealed that he had met this new board game, Munchkin, thanks to friends of the sea. So the advice I give you is make friends of the sea, always reserve many surprises. October 2019: here I am writing the review.

Munchkin (by some pronounced mànchkin, by others mùnchkin) is a game that holds wonderful surprises: every game is different from the others and if there are bluff experts at the table it's over, one of the most recurring phrases linked to the game is “friendships have been ruined because of him”.

It is true that Munchkin's cards all have names, illustrations (by the talented John Kovalich) and absurd explanations: during a game you can in fact meet a minotar, a dangerous Insurance agent o a useless Lame goblin, even a Plutonium Dragon… But on their side the characters can count on the valid help of objects such as So cute balloons, throw one Pollymorphic potion, or a version Coion of the Ponfusion!

The game box contains two packs: door cards e treasure cards, distinguishable from the back. The game involves the use of a six-sided die, not contained in the box, so it will be stolen from a purchased friend, taken from another game or you will need apps that simulate the roll of the dice. To mark the levels: pen and paper, 10-sided dice stolen from a friend or anything that counts up to 10.

The winner is whoever reaches level 10… At any cost, even putting a spoke in the wheel of the other participants.

Door and treasure cards are shuffled separately and placed face down in the center of the table for everyone to reach. Each pile will then have its own discard pile. Each participant draws 4 cards of each type from their respective decks. Class, race and treasure cards can be played immediately.

Who is on duty opens the door, that is, he draws a door card revealing it to everyone. A door card can be a Curse, a Monster, or typeless:

Once this step is resolved, there are two options:

The last stage is called charity: if you have more than 5 cards, those in excess must be played or given to the lowest level munchkin, distributing them equally if there are more players, or discarded if you are the lowest level player.

The crux of the game is in fighting, opening the door or looking for trouble: that's where enmities are created ...

In both cases, a possible chance of victory, of a single or a couple, could make the other munchkins want to put a spoke in the wheel by giving penalties to the fighting players or bonuses to the monster ...

When no one wants to break the balls to intervene in combat, the two forces meet again (level (s) + bonus - malus):

There are two ways a game of Munchkin can end: players have slaughtered each other so much that only one is left standing; or a player or female player has reached level 10. However, level 10 must only be reached through combat, not Level Up cards or by selling items. 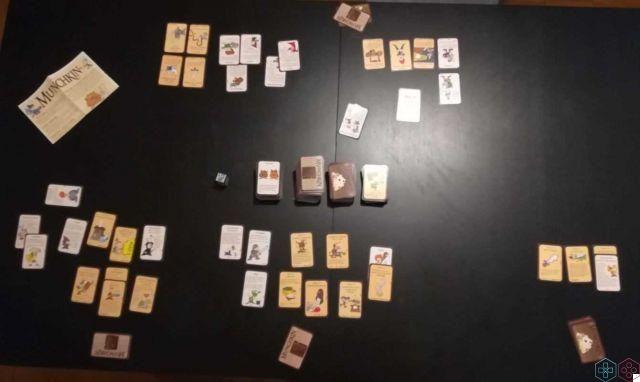 Typically after a fight, players and female players can get treasure. They are of various types:

All treasures have a value in gold pieces (some “No value”): Selling 1000 gold items advances 1 level. Treasures can be freely exchanged between players.

Some door cards are type Razz or type class: race and class characterize the munchkin, from which they get skills, bonuses or malus. Some items can only be used by specific races or classes. It is possible to replace a race / class with a new race / class by discarding the previous race / class card. Between the doors there are the cards half-Blood e Super Munchkin, which allow you to have two races or two classes.

Some items can be used only by males or only by females, and some curses change sex, giving a temporary penalty.

The expansions of Munchkin are so many and range between the most varied themes: fantasy, cthulhu, pirates, fairies, orient, vampires, space, superheroes, barbarians, mythology, west, apocalypse, war ... Many expansions can be played on their own or mixed with other expansions, others are small additional bunches to give color to your games. Related to the card games there are T-shirts, special dice, various merch and the nice Munchkin Quest, a board game with many elements of the card game.

Each expansion introduces new game mechanics: Accents and Galleons in the pirate expansions; Styles in Eastern Expansions; Powers in vampire versions; Origins of superheroes… By mixing the expansions it is possible to play a vampire elf who fights in stile kong fu against Ratwoman patter Dutch. Dispassionate advice: don't mix all the cards from too many versions together. 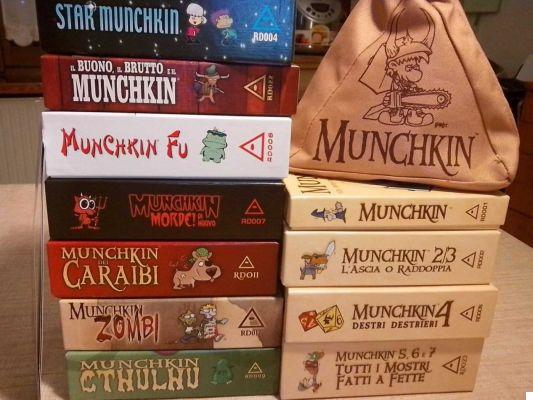 Our impressions of the game | Munchkin Review

The game does not require great strategy, the randomness is high, based on the type of cards drawn and the die roll. In any case, once you understand the rules, you can prepare games to the death. It has always intrigued me why the nut is not also supplied in the box, on which the escape mechanism is based anyway.

The package is small, portable anywhere. The graphics used refer to the humorous spirit of the game, and the characteristics of the monsters, objects and so on are written very clearly.

The game is approved in full!

Kragmortha Review, How to make friends hate you | Replaying ❯