MotoGP review 18: the world championship as you've never seen it before

MotoGP 18 puts aside the past of the series and evolves thanks to the use of a new graphic engine. The direction is the right one, let's try together to reach the finish line in this review

Also this year the time has come for all motorcycling enthusiasts to put on the racing suit and return to the saddle of the two-wheeled racing cars of the world championship. You don't have to worry if you are not a professional rider, if the suit no longer fits after the winter or if, even worse, you don't even own a motorcycle. As usual, the guys from the Spanish team took care of it Milestone to bring the world championship into your homes, more precisely at your pad.

This year though MotoGP 18 has a completely new look (graphics, physics and gameplay) thanks to the abandonment of the proprietary game engine and the use ofU. Is MotoGP 18 a perfect game? Absolutely not but it is without a doubt the best chapter of the series.

MotoGP 18: the evolution that was needed! | Review

The immediate impact of the new Milestone product is certainly positive. In recent months we have had the opportunity to test the promoted Gravel and Monster Energy Supercross, two products in their own right that have allowed us to study in depth the advantages guaranteed by the use of the new engine. The Unreal Engine 4 is precisely the breath of fresh air that served to renew interest in a product from the Moto Gp series. There attention to detail you can see it right from the menus that accompany the player on the track, but it is precisely when you jump on the saddle that MotoGP 18 manages to give its best.

If already in the past chapters we appreciated the peculiarity and attention given to the details of the motorcycle liveries, in this new iteration the general graphic impact is favored by a greater care of the traces now even more faithful thanks to the use of technology Drone Scanning. The circuits are finally more characterized thanks to the presence of an important quantity of detailed assets on the track. The stands are finally filled with a sufficiently animated audience and, in general, it is perceived better three-dimensionality of the visible space. The glance is also excellent with a good depth of field and a fair content of elements (eg trees) that favor the identification and contextualization of the track.

On the other hand, what does not fully convince (which, for example, I appreciated most in Gravel) is the rendering of lights and reflections on various surfaces. On the other hand, the quantity of polygons inside the various models is good, even if, within the classic intermission scenes in the pits, it always denotes a more Spartan work than what one would like to see with faces and elements characterized by few polygons. On the other hand, i 60 fps fixed and granite in any situation on PC which instead decrease to the canonical 30 fps on PS4 and Xbox One.

Il sound compartment instead it highlights the usual care of Milestone to propose real samples of the various motorcycles, increasing the pleasure for connoisseurs and not. 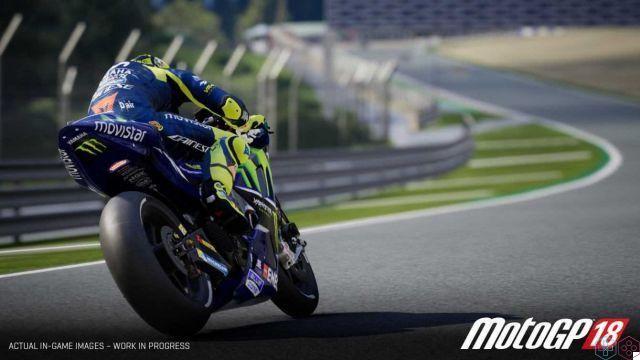 MotoGP 18: what a pleasure to get on board the bikes of the champions | Review

Pad to the hand are lived emotions diametrically opposed to what could be called an arcade driving system. We are not yet at absolute realism, mind you, but the MotoGP 18 gameplay is certainly the most satisfying, differentiated and adrenaline-pumping of the whole series. Whether you are riding a motorcycle of the campionato Red Bull Rookies Cup or to one MotoGP, you will have to adapt your driving style to the different response of the motorcycles to the various acceleration and braking stresses. Not only that, in the same situation (eg exiting a curve on a curb), the behavior of the bikes will vary even within the same category.

La depth of gameplay and realism it is even more highlighted by new animations of the riders in the saddle. Drivers with the driving style of, for example Marc Marquez they will have the lowest and external center of gravity in the curves to attack them with greater malice. Conversely, more balanced and cleaner drivers driving like Valentino Rossi they will assume, in the same situation, a more natural and less extreme pose. Too bad you can't customize your own driver created in career mode, it would have been a nice addition to strengthen the relationship between gamer and your virtual avatar.

Il physical engine it does its job with precision in most cases but not always. As happened in the past, there is no lack of real flights from the saddle following a very small touch with a rival. Overall, however, the steps forward are also evident in the dynamics of collisions. MotoGP 18 is the videogame for those looking for a bit of videogame fun as it has proved to be a suitable title for those who want to test their driving skills. A difficulty adjustment almost infinite, the full freedom of choice in the use of electronic aids and the possibility of setting the components of the bike to one's liking contribute to guaranteeing a very wide spectrum of possibilities. The real weakness of this game is represented by the narrowness of artificial intelligence: the pilots controlled by the CPU always tend to follow the ideal trajectory, even going to impact with our shape regardless of our position. 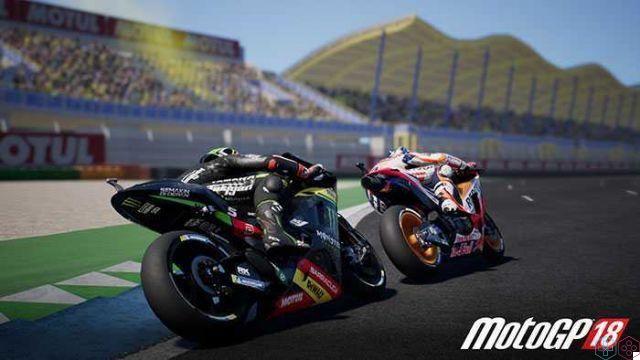 What has not changed since the past is the formula proposed by Milestone regarding the general offer of the various mode: immediate grand-prix, time-attack and the classic career mode. As for the latter mode, it has been made in part more interesting and engaging with new interlude scenes and an even closer communication with your team. However, we are still a long way from the enormous content proposed by the series F1.

The sector is still fluctuating and poorly structured multiplayer. In our tests carried out in one evening, we found only one active lobby, too little for a video game launched about a week ago. For the sake of completeness, however, the connection in the game appeared stable and with no lag. 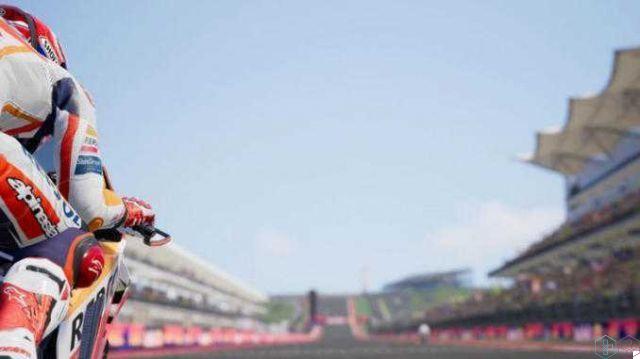 MotoGP is back in better shape than ever. Highly recommended purchase, without any limitation, for all lovers of motorcycling. Unfortunately, a not perfect multiplayer and some graphic and physical gaps due to the lack of experience with Unreal Engine 4 make us turn up our noses in some situations but, overall, it is a title definitely to be promoted.

MotoGP 20 review: the right game, at the right time ❯

add a comment of MotoGP review 18: the world championship as you've never seen it before