Also this year the long-awaited appointment with one of the most popular sports videogames in videogames returns: MotoGP 17

After having decided last year to change the setting of the game, dedicating it to the champion Valentino Rossi, here is this year the boys of Milestone take up the brand again MotoGP, polishing those that are the cornerstones of the series. Has that step forward that everyone has been expecting from this title for years has finally been taken?

Let's find out together in the full review!

Motorcycle lovers, this is your game!

Let's start this review by immediately telling you that yes, again this year MotoGP is the game to consider if you are motorcycle lovers and dream of whizzing on the tracks of the world Championship, like the champions Valentino Rossi, Marc Marquez e Dani Pedrosa. MotoGP 17 is a game simulativo which allows you to establish a decidedly personal feeling with the bike you are going to ride thanks to the different settings that can be set.

The videogame comes with decidedly simple and intuitive selection menus, which immediately put the gamer at ease. There has been a lot of discussion in recent weeks about how to be at home Milestone an incredible step forward has taken place with the use ofU in MXGP3, which allowed to have more realistic and immersive tracks. Unfortunately this was not the case MotoGP 17. The Milanese team has decided to bet once again (probably the last) on the proprietary graphics engine, also used in previous editions of the videogame.

The result is not not at all satisfactory: the paths appear decisively bare e devoid of characterization, the public is limited to being a silhouette on the stands composed of few polygons and the few dynamic shadows sometimes they are not that reliable. It is clear that by now the graphic engine is pushed to the maximum of its possibilities, in fact, among the various technical defects, one graphic characterization of motorcycles and riders truly worthy of praise for detail and definition, with absolutely perfect liveries and beautiful to look at. However, it could have been precisely this meticulousness of details intended for motorcycles that did not give the possibility to take care of everything that surrounds them, due to the obvious technical limitations.

Small mention of praise ai 60fps, constant on every occasion on the PC version on trial. Decidedly fail the interlude scenes inside the pits, always the same and monotonous; still absent the celebration on the podium. The overall result, however, barely borders on sufficiency, a visual impact that we certainly would not expect in a game released in 2017. 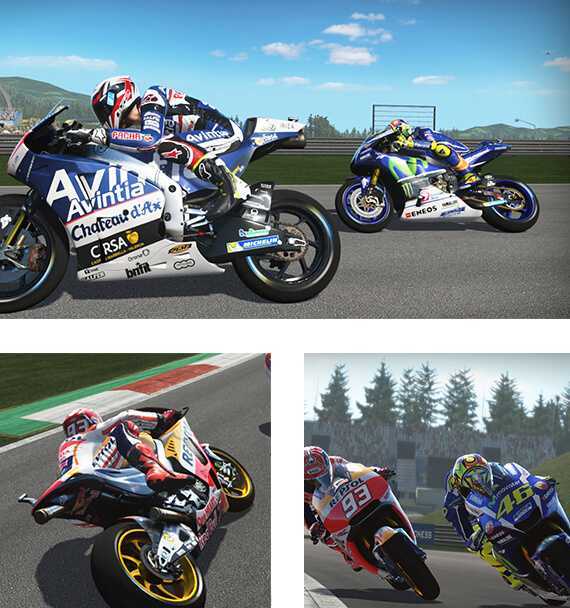 There are several game modes that we are now used to knowing and they vary from one full season to only one race weekend, up to an appreciated one split screen mode. However, we feel the lack of those modes that had gone to enrich the gaming experience in Valentino Rossi: The Game, which allowed to vary the pace and prevent the gamer from getting bored after a while.

Even in MotoGp 17 However, a very interesting new feature has been added, namely the "management campaign". As the name suggests, in fact, not only will we have the control of a driver created to our liking and we will drive him in the climb to glory from Moto3 to the MotoGP, but we will be real leaders of a motorcycle team registered for the world championships. It will be up to us to compose the team, hiring a driver who will race alongside us and manage economic issues regarding our team. The way our character grows has also been changed, coming to closely resemble the typical management of a RPG. In fact, we will be able to enhance some aspects of our character at the expense of others, defining their driving style in a definitive way.

Very large and very complete, as usual, the roster of pilots, updated to the current world championship of the most important categories. Also interesting is the addition of the very young Rookies and "legendary" pilots riding their loyal motorcycles, unlockable upon reaching various objectives.

Nothing innovative from this point of view, the feeling you get when playing this MotoGP, it is almost in no way different from that of past years. Not that this is a big flaw, on the contrary: the simulation is rendered very well and the variable difficulty level allows you to face increasingly interesting and fun challenges. In fact, it will very often happen to be thrown away by an indomitable bike, following a curve faced in the wrong way, or not set with a set-up not similar to our style.

On the other hand, theartificial intelligence of our opponents which will often lead us to be the only enemies of ourselves, as we will pay more attention to our driving rather than having to overtake other drivers, too often characterless and lewd. Even the collision system leaves many doubts and often proves imprecise, generating exaggerated tumbles when the sun touches the opponent's bike. Excellent csound amplification of the bikes, completely revisited in order to be as faithful as possible. 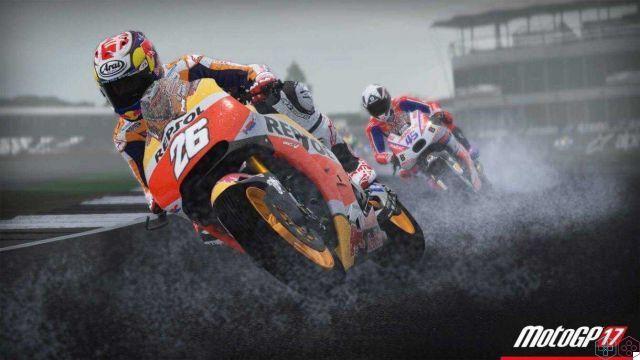 At the time of writing, after a very short time after the game was released, the multiplayer compartment shows up yes very stable but, unfortunately, they are very few online users with whom to compete. After several minutes of searching we were able to find only two lobbies with very few pilots inside, thus making this mode practically unusable.

In conclusion, this certainly cannot be said MotoGP you bring a breath of fresh air to the genre, but it remains one pleasant confirmation for all brand lovers.

6.8 Promoted, with many reservations

add a comment of MotoGP 17 review: back on the saddle!