Morphite review: a game to be able to understand

One mission after another we will be able to understand what awaits us in Morphite, following the thread of a past that is increasingly emerging.

Morphite it is not a simple trick to understand, especially in the first few minutes of the game. We will find ourselves in the shoes of Myrah Kale. A girl who will see a turning point in her life when she is assigned a mission by an eccentric doctor, Mr. Mason. That mission will become an adventure that will bring back to the surface Myrah's past and how it is connected to a mysterious substance: the morphite.

Myrah, to complete his mission, he will have to roam the universe using his spaceship. The first thing to do is refuel. Be careful to run out of coins or else you will be stuck in a solar system until you are ready to pay for the fuel. The best way to get money? Scan plants, animals and more and resell that information in various interplanetary stores. The game as much as it may look like No Man's Sky it has very little to share with that title.

The more we advance the more we should to scan elements, to obtain upgrade for our ship or our armor. We could not visit some worlds, in fact, until we have the upgrade for high temperatures. In addition, as we progress in the plot we will unlock different weapons or accessories that will help us along the adventure.

For the value of the story we shouldn't visit the many worlds that the game offers, but in many of these there are many elements to scan for our upgrades and it will still be worth it. A flaw is that the worlds not involved in the plot are poorly maintained and are often limited in size.


La difficulties of play is not very high. The only obstacle can be the language, only English. For the rest, in case we need help, our friend will be there Kitcat to help us. A cat-shaped robot that will accompany us throughout the game adventure. Also, initially, it might be easy to get lost inside a world, but we would have the ability to easily call up a transport module that will take us back to our spaceship. 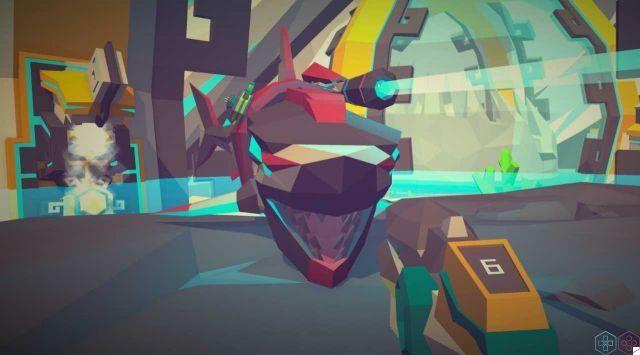 Audio and video compartment in Morphite

THEaudio gameplay is very comfortable and the soundtrack, above all, is enjoyable. The background noises, as well as the other sounds, will not be exceptional but they are certainly good quality and make the environment more immersive.

Il graphic sector it could have been handled better. The game features old-fashioned, checkered graphics that may not appeal to everyone. Surely the developers wanted to give that old-fashioned touch to pay homage to the entity of the game itself which is a mix between an FPS-like and a platformer.

Overall, the music increases the artistic quality of the game, which cannot be considered low-level.

Morphite it doesn't look very good in the first few minutes of the game, but giving it some time becomes a pleasant experience.

A round of applause goes to the developers who have created a game suitable for lovers of the genre. Too bad that it does not lend itself well to those approaching this type of game for the first time, which in the long run can be boring given the repetitiveness of some actions.

For those who love exploration, this game is more than suitable. Numerous worlds, numerous random enemies and tons of areas to explore.

MotoGP 17 review: back on the saddle! ❯

add a comment of Morphite review: a game to be able to understand