With Monster Hunter World, Capcom tries for the first time to bring its most original franchise to success, even in the West. A title designed at the same time for veterans and new hunters, it has offered us dozens of hours of exciting gameplay, and we are finally ready for the final verdict. You are ready? Monster Hunter is back: now also on PlayStation 4 and Xbox One

Monster Hunter World, or "the cruelty of nature". The series has always been known to be merciless, tactical, relentless. Long before Dark Souls was born, we were already ready to launch saints to take down dinosaurs and mammoth dragons, relying only on our strength, our skill, on a few pieces of equipment made to the best. with the skin of our gigantic victims. We do not fool ourselves: Monster Hunter it was never a title designed for the general public. Who knew him up to six years ago? Few but good players who had discovered it in the east.

But the market, fortunately, is revealing itself more and more inclined to welcome and accepting titles not too long ago marked as "niche". Look how it is going for the RPG and JRPGs: two come out a month, even large ones. Capcom understood that there was room for Monster Hunter too, but it had to be brought under the eyes of all. For this it was announced just seven months ago, last summer, with all the necessary hype. Because of this arrived first on living room consoles, PlayStation 4 and Xbox One, come on PC it will arrive only by the end of the year, probably between October and December. For this, finally, the difficulty has been specifically studied, where the past chapters slapped us right away.

But don't think that the "old" fans are left with a dry mouth. Monster Hunter World has challenges for everyone, depending on how much you like to risk, depending on how good you are as a hunter. Don't believe it? Read the review. And remember that the game will be constantly updated and supported by Capcom.

Zorah Magdaros, a gigantic millennial dragon, has crossed the sea to reach it in a new land. He is not the only one of his kind: so many monsters they are moving into new territories never before seen in the series of Monster Hunterattracted by who knows what. You are a simple hunter just arrived in the "distant Americas", grappling with this trail of death and destruction. Do you want to take up sword, bow or other weapons offered, and go to war against the gigantic creatures of the continent? Do you want to find out what is happening in this new world?

The plot of Monster Hunter World is this: a mere premise, although at times very interesting, to live your story, your adventures. If possible, even better, in the company of other friends locally or online. It is still a very good title devoted to multiplayer.

Plot aside, which in any case represents a discrete innovation within the franchise, where more often we were simply left to ourselves, Monster Hunter World is probably a title that needs no introduction. The game basically remained that: arm yourself and take down colossal monsters. After killing them we will randomly gain parts of their body with which to make tools, weapons and armor more powerfull. 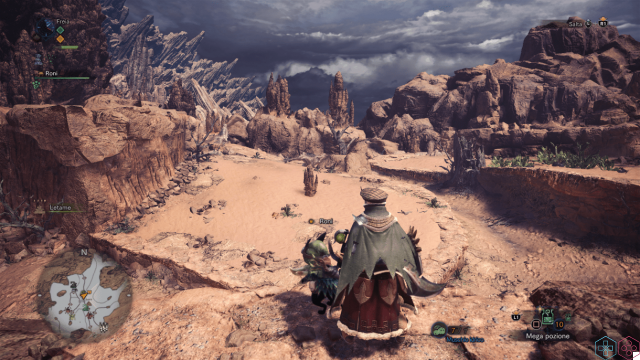 To complete valuable hunter sets we will have to defeat them more than once, of course, and this it will take quite some time, but it will also give the necessary satisfactions. There are main and side quests, a lot to explore and discover, but deep down Monster Hunter it's this: a highly strategic fantasy hunting simulator peppered with wise RPG mechanics.

The title is dubbed completely in Spanish: excellent news for our local players, who in this way will be able to fully enjoy the dialogues of the supporting characters and NPCs. Of bizarre characters introduced for the occasion in the series there are many, in fact, but the plot is still a simple backbone that connects various unrelated missions to each other. You don't even need to follow them if you don't want to. Through the system of bounties, missions and free exploration, you can choose the approach you prefer to the title.

The beating heart of Monster Hunter World and the hunting system and the player's approach to enemies on the pitch. Every single living thing it can be faced alone or in company, for a fluctuating level of difficulty, but the satisfaction will always be great in case of success. We will have to learn how creatures move, how they breathe, how they attack, and also how they flee (because they flee, unacceptable for those who have spent time and resources to weaken them).

The game's weapons are many and varied: you can see the commitment made by Capcom to make them unique. Each works in a certain way, each has a specific learning curve, and each allows you to experience the adventure of Monster Hunter World in a completely different way from the others. Our advice is to try them all to test the style of play you prefer, however, giving each weapon the ability to shine, and not abandoning it after a few minutes because it is difficult to use. 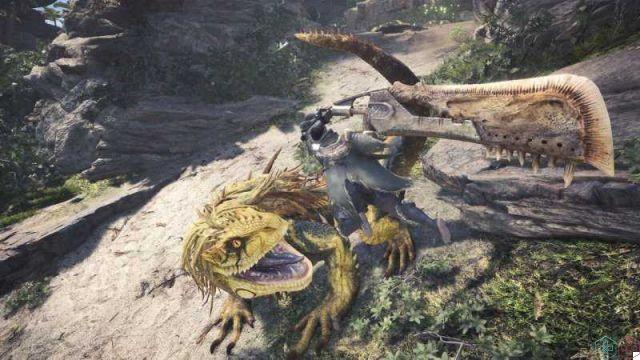 Weapons can naturally come upgraded as you progress through the storyline game and unlocking new resources. Similar (but different) speech regarding the frame: they confer particular bonus parameters and additional statistics for the hunter. This means that they become fundamental above all in the more advanced stages of the title, when an extra point in fire resistance can really make a difference, or in any case you will need to be real living tanks to withstand the blows of colossal beings.

Among most important news that we welcomed with a smile is certainly there the possibility of disassembling pieces of equipment to retrieve the resources used to create them. In this way it is possible to try out many different weapons and armor without necessarily having to go hunting again, losing hours of play to perform repetitive and boring actions.

Monster Hunter World is a perfect chapter to discover a fantastic saga, which has so far made Capcom successful especially in Japan. The title has been perfected to offer all players an experience that is never frustrating, always satisfying and stimulating, in a cruel but satisfying game world. Veterans, however, can rest assured: the game has remained essentially unchanged for them, none of the new options to make life easier. it is mandatory, and to see on PlayStation 4 and Xbox One Monster Hunter World is more beautiful than ever.

Moons of Madness review, a journey into cosmic horror ❯

add a comment of Monster Hunter World review, the final chapter has arrived