Almost a year after its release in the Land of the Rising Sun, the Japanese RPG Monster Hunter Stories lands in Europe. Developed by Capcom, the title is presented as a spin-off of the famous main series, whose deep plot juggles between strategic clashes, eggs to hatch and monsters to look after. In this review I will tell you about my first experience in the Monster Hunter universe

At first impact Monster Hunter Stories it might seem like a childish title, designed for a decidedly young audience. The bright colors, the character design reminiscent of Japanese anime, and above all the comic streak that is perceived from the beginning could deceive you, making you think you are in front of a game for children. As a newcomer to the series I can assure you that this is absolutely not the case. These aspects that I have just listed are only the "visible" surface of Monster Hunter Stories, but what the title hides behind these initial elements is much, much deeper.

When I grow up I want to be a Rider!

The first thing that Monster Hunter Stories does, as soon as we start the adventure, is to show us the context in which we will move through the presentation of three characters. We, of course, are the protagonists and we will find ourselves in the role of lutea, a young boy with a big dream: to become a Rider. In Monster Hunter Stories the Riders are powerful warriors who fight to keep the peace, accompanied by creatures, called Monster, who turn out to be excellent battle companions.

As we have already said, Lute is the main protagonist of the story but in reality, after the initial incipit, the game offers us a character customization system: this will then allow us to modify its gender, name and physical appearance. The options available to create our own Rider are quite limited, but despite this it's nice to give a personal touch to the protagonist that we will have to impersonate during the adventure. 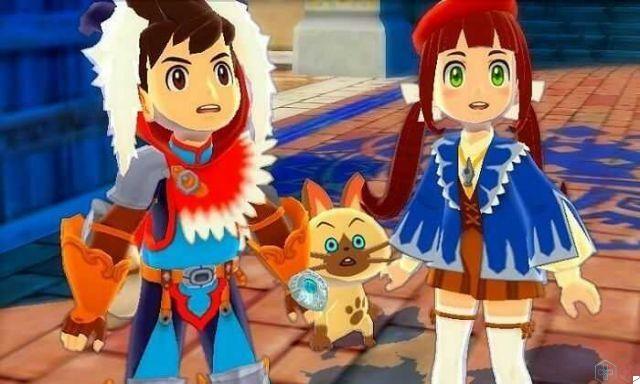 Monster Hunter Stories: Who finds a friend finds a treasure

Returning to the initial game sequences, we will meet two other characters, Lilia and Cheval, who dream of becoming Riders with us. We immediately understand that the three boys are linked by one deep friendship, which will remain constantly present throughout history. And it is precisely here that we come across another fundamental point of Monster Hunter Stories, namely i emotional ties. The game is not just combat and action, it is also friendship and sharing with other characters and with the same Monstie. Interpersonal relationships are treated in a sublime way and are an impeccable background to the Japanese role-playing game that is Monster Hunter Stories.

In addition, during the adventure, we will also have another travel companion, a kind of cat called Navirou. This little kitten, between humorous jokes and funny skits, will help us during the fights by giving us valuable advice. We can also call the pet ourselves, using the button at the bottom left of the console touchscreen: by pressing on it with the stylus we will call Navirou, who will give us some information on the current mission. 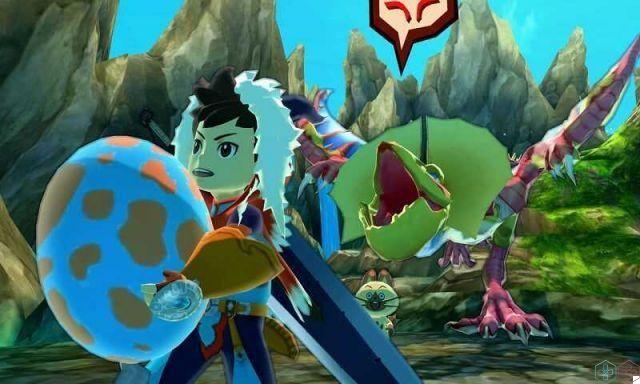 After the presentation of the characters we will come into contact with one of the fundamental elements of Monster Hunter Stories: the eggs. Yes, the monster eggs will be one of the fundamental key points to progress in the adventure. As it is easy to guess, thanks to them we will have the possibility of to have our own Monstie, thus expanding our team. Eggs can be found in random dungeons that appear in some points of the map, more precisely inside the monster nests. The latter will be well guarded, and therefore we will have to fight and make our way through the enemies to be able to get to the eggs.


Once we return to the village, which I will explore further on, we will have the opportunity to assist and actively take part in the hatching of eggs. This aspect has been inserted in a very interesting way within Monster Hunter Stories, since it will be us, through the touchscreen and the stylus pen of our Nintendo, to hatch the eggs of the Monstie. Holding the stylus we will have to tap on the egg shell and by doing so we will be able to give birth to our little monster. During the hatching, by tapping in certain points of the shell, we will be able to earn some extra bonus to our Monstie that will be born shortly thereafter, ensuring additional points in its statistics.

Before leaving, better organize yourself!

After the hatching of the eggs and the birth of our first Monstie, we will get to know other characters, mostly secondary, within the village of Hakum. This place is immediately fundamental, within which we will have the opportunity to organize ourselves before leaving for the various missions. As already mentioned above, here we will be able to go to the stables to hatch the eggs and subsequently form our team of Monstie, as well as organize our equipment from the blacksmith or merchants.

In the center of the village of Hakum there is also one showcase, through which we will be able to accept different secondary missions which will allow us to level up and earn extra money and points. Here we will also have the option to download online DLC missions, if available. Another very important thing is the our home, which will allow us to rest and recover health, Over which save the game. 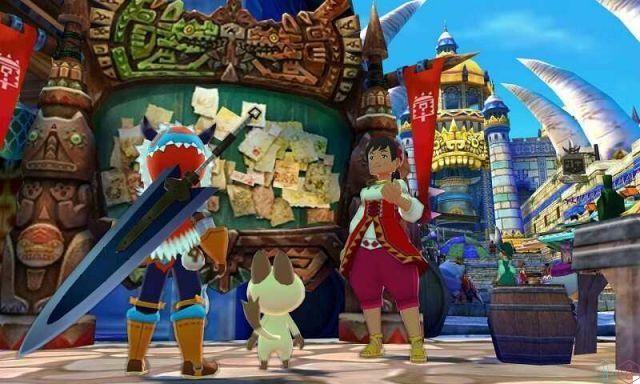 Once we leave the village we will be able to explore the vast lands of the continent, but the danger is always lurking!

The Monster Hunter Stories adventure takes place in a vast game world that can be explored widely, inside which we will be able to come across wild creatures, monster lairs and useful objects for crafting. The game map is really very large and in this respect, unfortunately, some smudges may be found. During the transition from one environment to another, the textures of the scenarios struggle to load completely: very often some characters do not appear instantly but only after a few seconds, and it is possible to find some slight drops in frame rate.

Monster Hunter Stories has a few problems with uploads, but the art design manages to compensate for this small gap

In larger environments it often happens that some elements of the scenario, including enemies, disappear and suddenly reappear. Inside the dungeons this aspect can cause some problems, especially if you want to avoid fighting with certain Monstie. The latter, in fact, will attack us if we get too close and sometimes it can be more convenient to abandon the fight and escape. However, this is not exactly simple if, due to unstable texture loads, monsters disappear and suddenly reappear from the game environment.

These little smudges however, they are compensated by a very well chosen art design, designed to attract attention. Because yes, it will be really very difficult not to be kidnapped by the bright colors and cheerful tones of Monster Hunter Stories, which will most likely be able to bring new players closer to the saga. 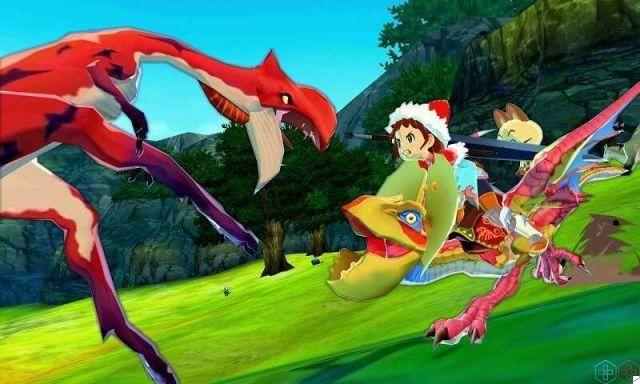 In addition to the eggs, exploration and Monstie, another key point of Monster Hunter Stories is, without a shadow of a doubt, the combat system. It has the typical characteristics of Classic RPG, proposing a turn-based combat system. During the clashes we will have the opportunity to use three basic attacks, or speed, technique e power, respectively distinguished by the colors blue, green and red. Combining these three types of attacks will create combo, which will deal much higher damage.

Teamwork in Monster Hunter Stories: Teamwork is everything

Previously we highlighted how emotional bonds play an important role in Monster Hunter Stories, an aspect that is also reflected during the fights. This is because, during a fight, we will have a chance to get on the saddle to our trusty Monstie, thus going to use very strong special attacks. This action, however, will only be possible if we will establish a bond with our partner through the fulfillment of special events, some of which appear as simple quick time events. If we are successful, our bond bar will charge and, once filled, we can use the bond skills together with our Monstie.

For those who are not very familiar with classic turn-based fights, the combat system proposed by Monster Hunter Stories could, at times, be a bit difficult. The clashes are quite unpredictable and it is necessary to study the different attack parameters to avoid perishing in battle. It will take some practice then, even to learn how to use the various power-ups, but once you get into the rhythm everything will be easier.

Monster Hunter Stories also features a multiplayer compartment, thanks to which you can challenge friends both online in that local. The mode does not introduce any particular novelties, since the fights are structured exactly like those of the main campaign. The multiplayer only allows you to clash with other Riders, which in the long run could be a bit monotonous and repetitive. 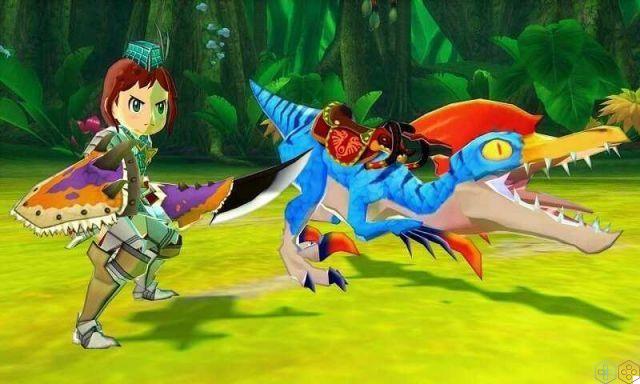 As a novice player of the Monster Hunter saga I feel I can highly recommend this title. Monster Hunter Stories will give you the opportunity to immerse yourself in an exciting adventure, where fighting merges with friendship and teamwork, giving life to a deep texture. There will certainly be comic and funny moments, and the unpredictability of the fighting will offer a good level of challenge. Too bad for the frame rate drops and unstable texture loading that slightly spoil the gaming experience, even if these defects are still minor.

8.8 An experience that will not disappoint you

Morphite review: a game to be able to understand ❯

add a comment of Monster Hunter Stories review: together for victory