In this review we will analyze, among its strengths and weaknesses, Monobot, a rather peculiar two-dimensional puzzle game, inspired, according to the developers, by the works of Limbo and Inside

The first thing that comes to mind when thinking about Monobot, is the reference to the much more famous works of Limbo and Inside. It is almost inevitable: even just spending a few hours checking ours robotic protagonist, we will experience the same sensations we had experienced years before with the two games developed by Playdead. Despite this, Monobot should absolutely not be considered as a mere plagiarism: as we will see in this review, several elements of the title shine with their own light, and make it, despite some weaknesses, a very interesting game for fans of puzzle game in 2D.

Similarities with Limbo and Inside

In Limbo and Inside the gaming experience can be summarized in a single expression: in both games, we are in Kafkaesque situations. The expression "Kafkaesque situation", for the uninitiated, indicates one paradoxical situation, generally distressing, which, however, is not questioned, but rather is accepted as status quo, displacing the viewer. In fact, in Playdead games (especially in Limbo, the first of the two), we are catapulted into distressing worlds without being given any explanation, and we have the only possibility to advance. Anguish is also rendered by the mechanics of the trial and error, which causes us to die repeatedly due to unpredictable traps at the first approach.

Without wasting too much time talking about titles that are not related to this review, Monobot reflects, at least initially, all these aspects in exactly the same way. We players take on the role of a small robot, which for some reason is activated from its cell, and we don't know how or why. We also learn very quickly what the world we find ourselves in is hostile, so we will have to survive the countless threats that will face us. Also in this case, the mechanics of trial and error reappear: even if to a lesser extent than in the Playdead games, we will find ourselves in situations where death will be inevitable, due to the unpredictability of some traps. 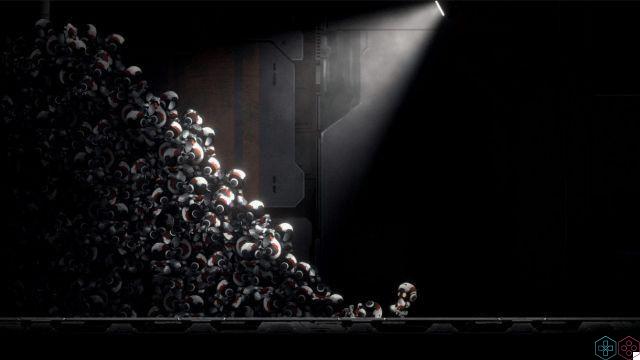 A story waiting to be discovered - Monobot review

As already mentioned, at the beginning we find ourselves catapulted into this world for no apparent reason. However, we will have the opportunity to find out as we advance: through some flashback which will be shown in the various sections, and thanks to the mail and text documents that we can find on the terminals around the levels, we will be able to understand the reason and purpose for which we were awakened. This way of discovering the plot that lies behind this strange world without humans is therefore intriguing, however, in the face of a plot that is not totally exciting.

Although the narrative, in relation to the player's desire to discover details about the protagonist and the game world, may be intriguing, in the long run it is excessively slow and chopped. Even at times that should be most interesting, it has been difficult in my experience to actually find the various flashbacks and textual documents interesting. 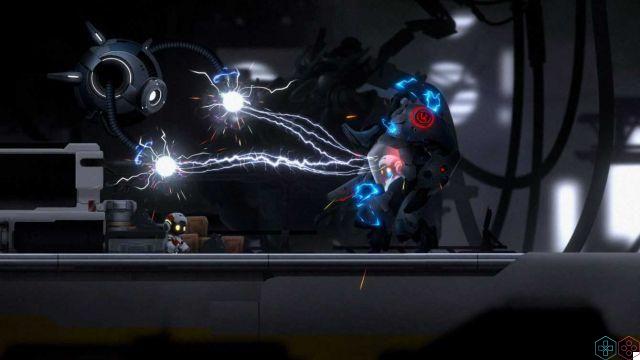 Continuing with this review of Monobot, the setting is made up of scenarios with mainly cold colors, which convey well the sense of desolation that we want to pass the title (all accompanied by an almost absent soundtrack, active only in some moments). They mainly alternate indoor scenarios, inside the various workshops, and outdoor sections: The main difference between these two scenarios is the decrease in gravity outside, which offers an important gameplay variation, allowing us to perform higher jumps.

The graphic style, although very simple, is still capable of effectively transporting us into the game world. Despite some minor problems, such as the lack of fluidity in the animations of the robots that can sometimes alienate the player, or the fact that some elements of the background are confused with those of the puzzles, resulting confusing, the graphic style is pleasing to the eyes and functional to the setting and the atmosphere that the game wants to convey. 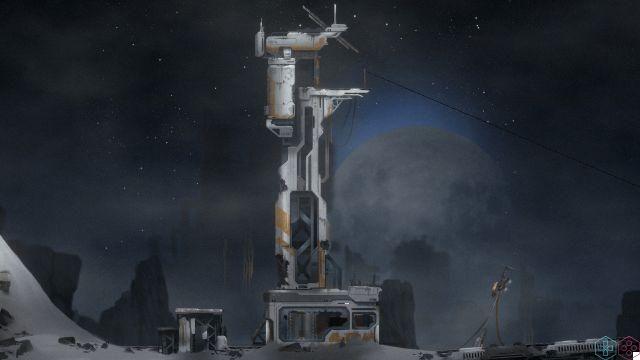 As indicated by the reference genre of Monobot, the gameplay is mainly composed of puzzles, which we players will have to solve in order to advance. As personal gadgets, which will be crucial for this purpose, they are Monobot's two special arms. Both arms will allow the teleportation, even if in two different ways: with the first we will be able to hook, for a few seconds, to some special platforms that will appear in the scenarios, while with the second we will be able to exchange our position with that of any mobile object of the scenario.

The puzzles, in general, are well laid out and offer a good degree of challenge. With few gameplay mechanics (the two special arms, gravity variation, and more), the developers still managed to deliver a variety of remarkable puzzles, and each of them will not turn out never taken for granted. Some of them can be problematic: when we check the protagonist of the game, we will realize the slow responsiveness of commands, making the most agitated situations excessively difficult to manage. 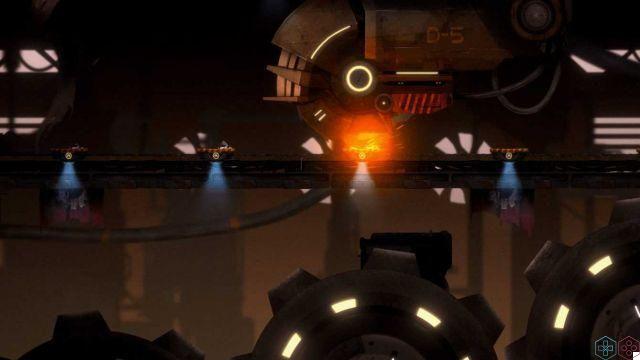 Ultimately we can consider Monobot as an interesting experience. Spiritual heir of Limbo and Inside, Monobot takes their most peculiar characteristics from these two titles, and then translates them into its own narrative universe. Speaking of the narrative universe, although initially intriguing, the plot fails to fully involve, often leaving the viewer indifferent. As for the part played instead, we have well-structured puzzles, making the title an excellent puzzle game, except for some situations in which the responsiveness of the commands makes it too difficult to advance.

At the end of this Monobot review, the word is on you. What do you think? Have you played it or are you going to play it? Waiting for your comments, what remains to be done is to invite you to stay tuned to the pages of techigames to follow all the most important updates in the gaming world. If you prefer to buy game keys at discounted prices, you can do so via our link to Instant Gaming.

7 A small heir to Limbo and Inside