Moero Crystal H is the son of an unfortunate genre that struggles to take root in the West, let's find out together in our review if it is worth buying the new title of Compile Heart and Idea Factory

We're pretty sure not many of you will be familiar with the "grid" JRPG Dungeon Crawler. An under-exploited and rather rare sub-genre here in the West, which sees few titles that are actually valid as exponents. One of all, the unforgettable Mary Skelter: Nightmares, a video game released in 2016 on the (defunct) PlayStation Vita and subsequently arrived on PC. If, on the other hand, we move forward in time, we find Labyrinth of Refrain: Coven of Dusk by a NIS America always ready to experiment and get "involved" to explore the various facets of JRPG.

Moero Crystal H is fully in the genre, adding a good ecchi and winking component as only Compile Heart can really do. The company, born as a limb of Idea Factory, is in fact the arm and mind of one of the fanservice series par excellence, Hyperdimension Neptunia, which has been able to retell years and years of console war making it a fight between cute and prosperous girls. The title has recently been released localized in English on Nintendo Switch and we obviously have not missed the opportunity to try it for you. Welcome to Moero Crystal H. 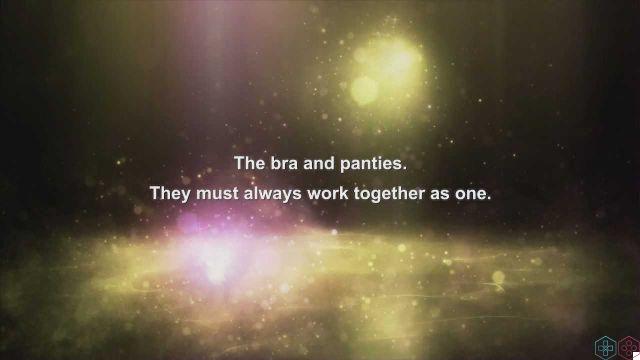 Moero Crystal H is part of that (very long) array of purely "Japanese" titles that we never would have thought we would be able to see localized and transported on a console like that of Nintendo Switch. Leaving aside the genre, which as we said at the beginning is certainly not one of the best known and most appreciated in the West, the “soft-porn” component is quite marked and the main focus of the entire gaming experience. What one might think, therefore, is that this drift and who may want to hide an underlying lack of actual content at the "video game" level, but this is not exactly the case with Moero Crystal H.


One of the sore points of the title is, as you can imagine, the script. Trivially, our protagonist is looking for his father and will find himself mixed up in something much bigger than him. The game world of Zenox, this is the name of the perverted protagonist, is based on the eternal balance that exists between the Bra of Darkness and the Panties of Light. Deep. When the first of these two fundamental elements is stolen by a mysterious thief, a fearsome rift opens up in the world that threatens to destroy it completely. It will therefore be the task of Zenox and the Monster Girls that he meets on his way to recover the Bra of Darkness and save everyone. Well, after this necessary premise, let's move on. 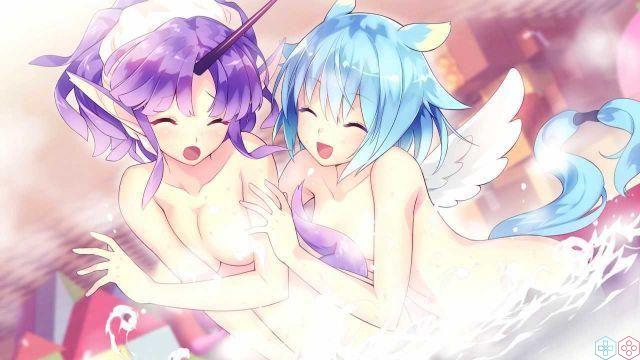 As already mentioned at the beginning, Moero Crystal H is fully part of the JRPG Dungeon Crawler genre with a "grid" view. This means that Zenox will face the exploration of the various Dungeons (not randomly generated, but fixed based on the plot) in first person, moving on a grid and predetermined corridors. Each dungeon will be full of secondary roads with treasures (panties) and hidden objects, but the road to continue will be only one.

A maze, in short, but still a corridor. One of the flaws of this type of video game, in fact, is that if you fail to make the Dungeon interesting (perhaps making it random at each entrance) or to insert particular mechanics, as in Mary Skelter, exploration in the long run will become monotonous and extremely repetitive. As in fact happens in Moero Crystal H.

In the dungeon exploration screen, below, we will be able to see the girls we have chosen to bring with us. Here we come to (finally) one of Moero Crystal H's strong points: the combat system. In the various turn-based battles with the enemies on the map, which will face us in random encounters, we will be able to use both Zenox and up to a maximum of 5 Monster Girls. Zenox will have a purely support role and will be able to accumulate Desire over the turns and then be able to release it on a girl and make her temporarily stronger. He can also use salvage and defensive or offensive objects, but he will not be able to attack directly. 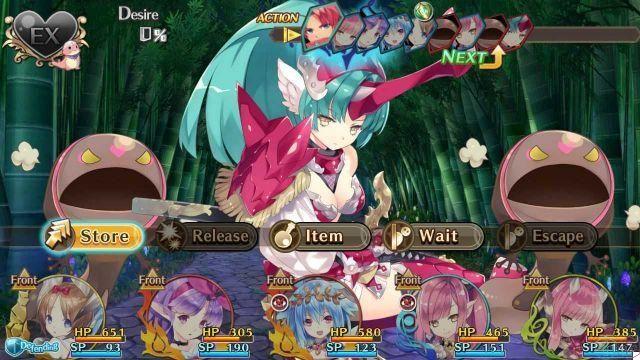 80 girls can be enough for me! - Review Moero Crystal H

To this lack they make up for 80 Monster Girls that you can recruit over the course of the game. Each of the girls will have different sets of equipment available that will modify the "job", tweaking the basic statistics to make them more similar to a build of physical strength or a magical strength. Skills will obviously vary too, so it's up to you to decide how to define your party. To increase the customization options there are the equipment, four in total, which can go to modify the statistics or give unique effects to the girls. Another parameter of choice is, of course, the physical appearance of the Monster Girl. And in this case you will definitely be spoiled for choice.


To get the various Monster Girls that you will find in the course of the adventure to return to your side, some forcibly by plot, others avoidable if you are too weak, you will have to ... Convince them. To do this, the first step will be to attack the clothes that the girl is wearing one by one, destroying them and making her remain in déshabillé. Then you will have to remove the darkness that grips the mind ... Touching it in various parts of the body. All this, we advise you, away from your parents. 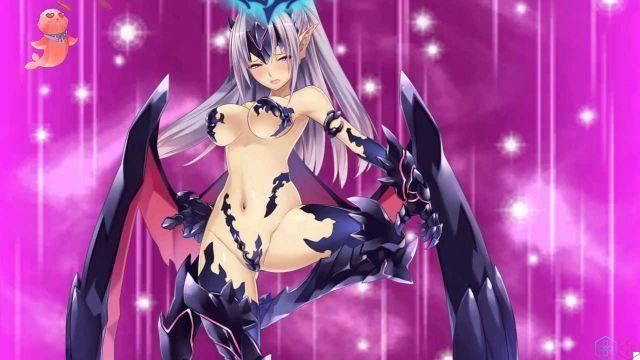 So many things to do, little time to do them - Review Moero Crystal H

There are also several secondary activities that can be performed in the world hub, for example increase the bond of affinity with your favorite Monster Girls, improve their rooms, explore the mazes of their mind to fathom their memories and much more. Obviously you can also upgrade your equipment and buy various types of items from the different merchants you will meet along your way, as well as at the fixed shop in the city. A normal role-playing game, from this point of view, in short. The various gameplay mechanics, however, mix quite well and make everything quite addictive and captivating, as well as fun.

Technically speaking, Moero Crystal H performs quite well both in dock and in portable mode. Some slowdowns in the game menus (which may have already been patched), especially in the selection of healing items, are inexplicable, but the loads are in general quite fast and satisfying. Don't expect exciting game maps: the various dungeons are far too anonymous and standardized, although each has a distinctive theme. On the other hand, the various sprites of the different Monster Girls, all different and recognizable, are beautiful and very detailed. 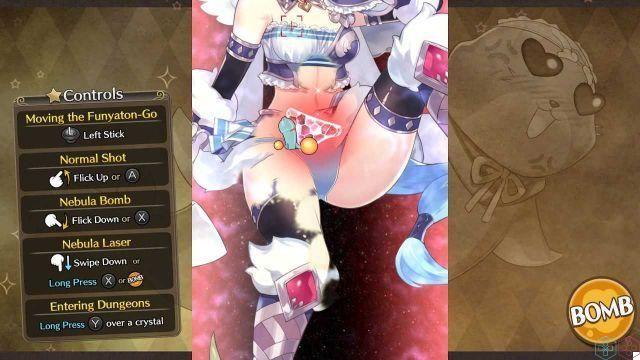 A mention to the controls. The title turns out to be much more performing and "comfortable" in handled mode, especially as regards the "capture" of the various girls. "Touching" them in dock mode, so with the help of a controller, it is really uncomfortable and difficult, and will often guarantee you a sure defeat. On the other hand, taking advantage of the touch in portable mode will allow you to obtain the same result with minimal effort, without losing much in terms of graphics resolution. Indeed, on a smaller screen some imperfections are much less noticeable. The slowdowns in the menus, however, remain the same, really inexplicable.

Another small flaw in Compile Heart production is definitely the management of save points, that especially in the first two dungeons, where you will still be young, inexperienced and weak, it will turn out to be quite frustrating. In the various mazes, in fact, you can save only in very few specific points, or use a return object and lose all the progress made up to that moment. This is because, once you return to the dungeon, whether you do it with the auto-pilot or not, you will necessarily have to return to the point before on foot, because there is no teleportation. 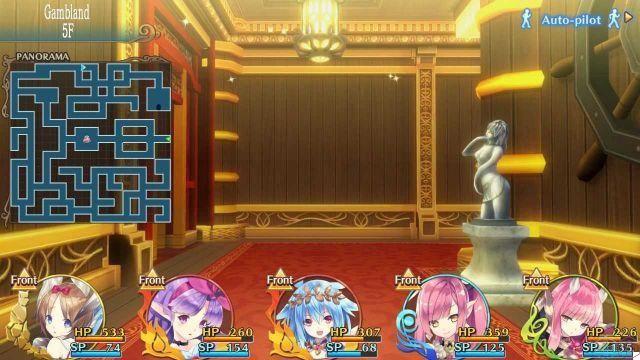 I feel a fire inside!

Moero Crystal H is a good JRPG Dungeon Crawler with "grid" view, son of an unfortunate genre that certainly won't win over many players. The aesthetic variety of the many girls that you can recruit and a good management of turn-based battles will surely satisfy the palate of fans of the genre.

If you are willing to turn a blind eye to some technical shortcomings, a practically non-existent narrative and a basic repetitiveness too accentuated in the exploration, you will find yourself in your hands a fun and addictive title that will keep you glued to the screen for several hours. Always away from your parents, please.

Monkey King Hero is Back review: did we really need it? ❯

add a comment of Moero Crystal H review: play away from parents!