Megaquarium has also arrived on PlayStation 4 and certainly our review could not be missing. Let's find out how the title performed

The title developed and released by Twice Circled landed on Steam over a year ago, exactly the 13 September 2018. After some success on the gaming platform of Valve, the developers have decided to bring the game to consoles as well. Want to find out if the developers' choice will pay off? Let's start this then Megaquarium review and let's see how it performed on PlayStation 4.

When fish become the only way of life

Let's start by introducing the game for those who don't know it yet. Megaquarium is a management simulation with very cartoon graphics where we will find ourselves managing our personal aquarium. It will obviously start with a short introductory tutorial which will broadly explain the various features. As we progress through the game, more notions will be added regarding new species, aquariums and various equipment.

Our main goal is to gain fame. The more famous our aquarium is, the more people will come to visit it, the more money we will have available for all the necessary works. The fundamental point of the game is the fish. In the game there are a lot of them and each present species will have particular characteristics which you will absolutely have to take into account. Their every need must be satisfied if you want them to live in health and to be the destination of visitors who will cross your doors.

The various machinery that will allow us to come to our rescue keep the water clean and warm. In addition, to recreate the various environments in which our little friends live, we can also place the various decorations in the tubs. These will not only serve as embellishment, but will allow the creation of natural shelters. Whether they are small caves or simply algae, the fish will be grateful to you.

Very important is the choice of personnel. These will be the "keepers" of our fortune. They will deal with repairsand care of our little friends and cleaning of the premises. Each will be equipped with precise characteristics that will make it useful for one job or another. Also good subdivision into various areas of our aquarium which will allow us to organize the staff so that everyone looks after a certain area. This will greatly optimize the work, greatly increasing the efficiency since theAI is not very developed.

As we have already said previously in this review on Megaquarium in the PlayStation 4 version, the tanks must have an optimal temperature and the water must be clean enough if we want to grow our little friends. Furthermore we will have to give the latter the appropriate feed. Precisely for these purposes we will have a multitude of machines available which however will tend to break quite easily. Each machinery, just like the species of fish, it can be unlocked from the related tech tree. 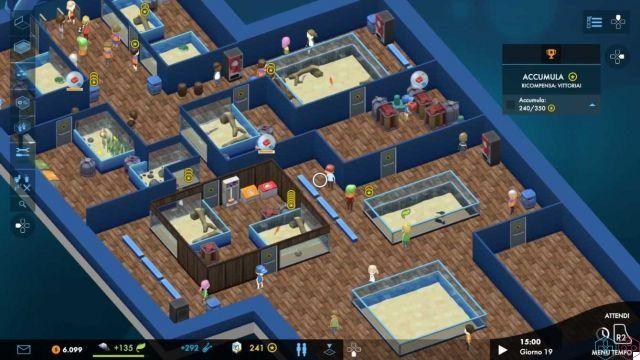 We now come to the fundamental point of this port. Graphically the game is flawless, without any strange interpenetration or other visual glitches that could compromise the gaming experience. Also fluidity is very good and there were no frame drops even with the overcrowded aquarium. The only real big problem comes with the camera though. Contrary to the PC version in which it was enough to move the mouse cursor to "touch" an object or simply position it leaving a stable shot, in this version the shot will move with us and we will only be able to select the objects with the central viewfinder of the screen.


To this small inconvenience must be added the limited zoom, but above all the rotation of the camera around a single axis. It will be possible to rotate it left and right, but not up and down. That is prevents the player from seeing their aquarium from above, which is very fundamental to keep the entire structure under control. The audio sector, however, seems very well taken care of, even if the music, in the long run, can be annoying. The layout of the controls on the pad, with hot keys that allow the player to navigate at full speed in the various menus. 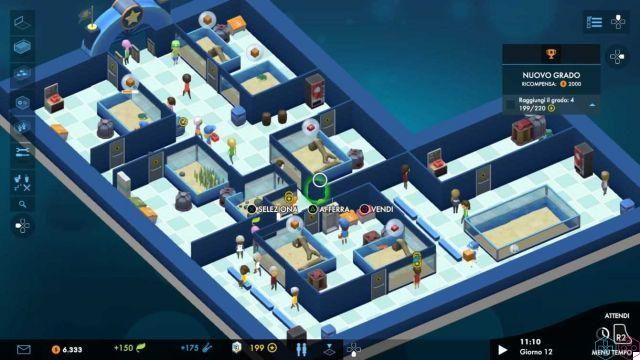 Build and wait, wait and build

We are now reaching the end of this review on Megaquarium for PlayStation 4 and it is time to take stock. The port was found to be well managed by the developers by Twice Circled who have been able to optimize the title originally born only for PC. Fluidity reigns supreme on this title, allowing us to enjoy one good gaming experience. The only real big flaw, however, comes from one camera managed in a non-optimal way.

In fact, the latter will be somewhat limited in movement. It will in fact be blocked at a certain height and it will not be possible to lower or raise it further, as the rotation and slippage are limited around the vertical axis only as regards the first, while to the horizontal axis as regards the second. Structurally, however, the developers have done a great job rendering the management of the various menus is really simple that make up the game. That's all for this review.

I remind you that the game is available for 4 PlayStation, Xbox One and PC at the recommended price of 19,99€. In order not to miss further news and reviews regarding the videogame world, keep following the pages of techigames!

7.8 Great for lovers of the genre

add a comment of Megaquarium review: fish land on PlayStation 4