Let's find out together, in this review, if it is worth recovering Lego Marvel Super Heroes on Nintendo Switch: can a 2013 title on Lego Super Heroes still be attractive?

After the questionable Marvel's Avengers, with the approach of the end of October, the release of Guardians of the Galaxy is also coming in great strides, a title that has promised between the lines to be something more than what it turned out to be. be the Avengers video game. But if you are hungry for superheroes, and you are unable to wait neither the upcoming title of Square Enix, nor the two dedicated to the world of DC Suicide Squad: Kill the Justice League and Gotham Knights, perhaps we have something that could do for you.

Lego Marvel Super Heroes is a title dated 2013. Well yes, feel as old as you want, but the first iteration dedicated to Marvel superheroes with brick design, developed by Traveller's Tales and produced by Warner Bros, dates back to the early stages of the last generation of consoles . And despite its direct sequel, Lego Marvel Super Heroes 2, has arrived on the Nintendo Switch, the first chapter had always been "relegated" to the PlayStation 4 and Xbox One versions. At the end of the summer, however, the porting of Lego Marvel Super Heroes on the Nintendo Switch was finally announced, and it is precisely this version that we will talk about in this review!

An ode to fanservice (done well)

Let's start from an assumption: each title belonging to the LEGO videogame world is a product dedicated expressly to fans of the franchise to which it refers. Whether it's Star Wars, Indiana Jones, Harry Potter or, in this case, the Marvel Universe and the MCU, brick-and-mortar video games have always been a marriage of comedy and fanservice dedicated, in fact, to those who know those worlds by heart (or to the youngest in age). However, this is a factor that does not in any way detract from the various productions which, on the contrary, have gradually been refined over time. Just look at the newly announced Lego The Skywalker Saga to get an idea.


Lego Marvel Super Heroes brings us a narrative based on both Marvel comics and the world of films dedicated to them, the so-called Marvel Cinematic Universe. While he was quietly darting aboard his beloved table near New York, Silver Surfer is attacked and captured by Doctor Doom and his vehicle destroyed in various bricks, which will then be the target of research for a whole series of Super Villain led by Destiny. The dear Doctor wants to do nothing but recover them all and build the Cannon of Destiny, with which to reject Galactus and finally become the Dominator of the universe. Our goal, or rather that of the band of Super Heroes that during the 12-15 hours of the main story we will impersonate, will be to stop the Super Villains and regain possession of the bricks. 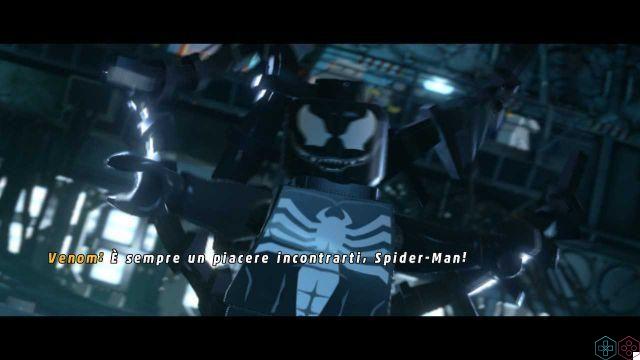 A classic Marvel comic story, in short, but which is told with the wise and always fun irony of LEGO titles. Simple and effective, useful for the rhythmic and well-marked introduction of all the impersonable Super Heroes of the game, in the different settings that will be given to us as a background. From the Grand Central Station in New York, to the Stark Tower, passing through the Raft to get to Asgard, the various portions of the map have all been reproduced in great detail and vari Easter Egg that will surely please Marvel fans.

Also the various Super Heroes have been reproduced in detail, both in appearance (made irresistible by classic LEGO design) both temperamentally, with an extra touch of irony and sagacity that makes them joke about their background. We will therefore have a Peter Parker complaining about his double life, or a Tony Stark in love with his Super Suits, passing through a Mr Fantastic a little too pedantic. Coupled like those of Wolverine and Hulk, for example, they aroused quite a few laughs due to the particularly over the top interaction bunters, and that they are never banal or obvious. In short: if you have played a LEGO title in the past, you know very well what we are talking about. For those who are new to this franchise, know that you will be positively surprised. 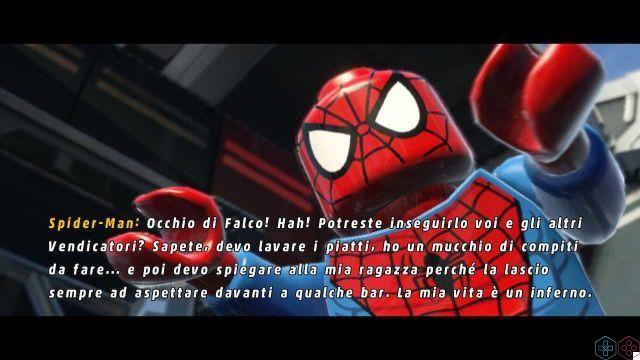 Even in terms of gameplay, we find ourselves in front of a classic LEGO. The story will take us to different locations, as already mentioned, which we will have to explore thoroughly for unearth its secrets and find the various golden bricks scattered here and there. If for the first exploration, the one linked to the plot, it will be the game itself to entrust us with three Super Heroes with distinct powers, once completed the Free Play Mode will be unlocked in which we can select the party and complete the level. This is because each character will have their own unique abilities and certain areas or levers will only be accessible by a class of Super Heroes.

For example, only Big figures like Hulk or The Thing will be able to move heavy objects with green handles, and only Intelligent figures like Iron Man or Mr Fantastic will be able to interact with advanced machinery. Spider-Man's spider senses or Wolverine's instincts will be used to unlock otherwise invisible secondary passages, just as our Iron Man will be able to use his missiles to destroy silver structures. You will understand that the title, like all those belonging to the franchise, have a base a structure from Metroidvania, which rewards the replayability and intuition of the gamer. 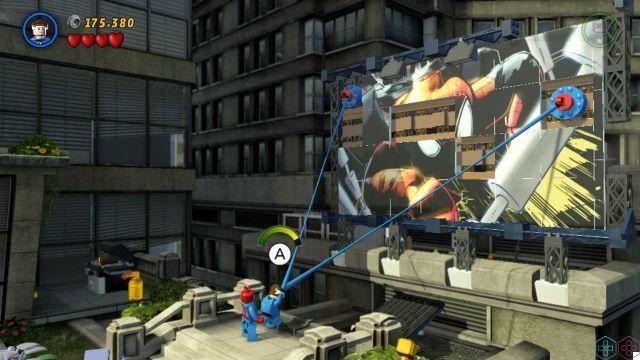 Each power will therefore be essential to complete the various puzzles that the maps will put in front of us, as well as having to defeat all the enemies that get in the way of us and our goal. There are also several bosses, all very different from each other, and never particularly challenging in figuring out what to do to defeat them. On the other hand, the titles of the LEGO franchise are also suitable for a very young audience, so it would be strange to be faced with strange walls of difficulty.


To accompany the various story missions, there is also aManhattan island which forms the open-world part of Lego Marvel Super Heroes. The city can be explored with any figure unlocked in the course of the adventure, and you can travel through it either by flying, by foot, or by stealing vehicles in full Grand Theft Auto style. The secondary activities to be carried out are really many and varied, between races, sub-quests of various NPCs and various environmental puzzles to unlock new figures. What we have unfortunately noticed, however, is a small defect inherent in the very being of Lego Marvel Superheroes, that is, a title of 2013. 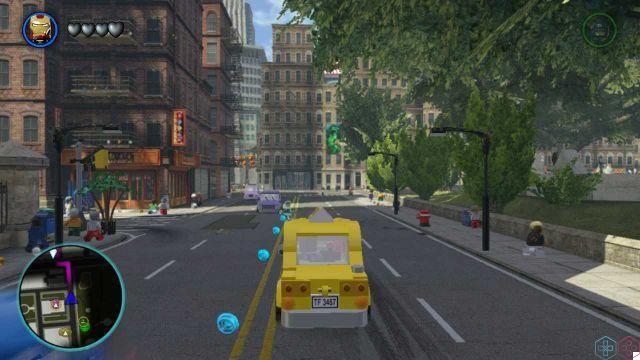 If in fact the various maps inherent to the plot missions are as detailed and full of details, that of Manhattan is decidedly poorer and angular both artistically and technically speaking. If at the fort pop-up of the objects on the screen, even more evident if you use flying characters like Iron Man, are added commands a bit woody and difficult to master, especially during the flight phases, you will understand why we definitely preferred to explore every nook and cranny of the Stark Tower rather than get lost in the alleys of the city.

The pop-up in the open-world is a problem particularly accentuated by the less performing hardware of the Nintendo Switch, but we must admit that on a technical level we have not noticed other big flaws on the little girl of the great N. And indeed we must admit that it was a factor that we expected, considering that Lego Marvel Super Heroes is still a title with eight years on its shoulders. No Frame Rate problems or glitches and graphics bugs whatsoever, the shiny and clean textures of LEGO bricks are particularly beautiful to look at, especially in portable mode. A little less in docked mode, where a antialiasing not really performing shows a few edges too many. All in all, though, Lego Marvel Super Heroes on Switch performs just fine. 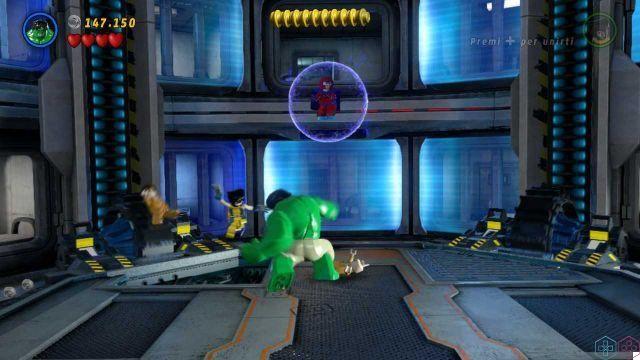 An honorable mention to the soundtrack, even if some audio problems in the movies make it strangely too loud compared to the voices of the dialogues, and the presence of some of the original voice actors of the films (especially Wolverine's, wonderful). The complete dubbing in English is a gem that all fans will really appreciate, and the Spanish adaptation of the subtitles does honor and justice to every line and sketch. Commendable. 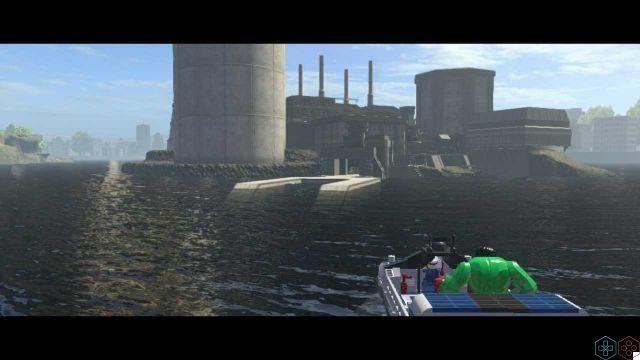 At the conclusion of this review of Lego Marvel Super Heroes on Nintendo Switch, we can only recommend the title to all fans of comics and MCUs. This is because, although the LEGO videogame franchise is definitely suitable even for the youngest (and therefore characterized by a level of difficulty set downwards), the wealth of details, the easter eggs and the comic sketches inherent to the various Super Heroes make a product extremely suitable for fans. A hymn to fanservice, but well done. And now we await the Skywalker Saga!

We remind you that Lego Marvel Super Heroes is now available on PC, Xbox One, PS4 and Nintendo Switch. Let us know what you think below in the comments, we will continue to keep you updated with all the news, guides and reviews on videogame and tech! And if you are interested in game keys at affordable prices, we recommend that you take a look at the InstantGaming catalog!