LEGO Marvel Super Heroes 2 review, the most powerful heroes are made of bricks

The greatest heroes of Marvel cinecomics have already met on more than one occasion in the low-priced titles of the TT Games. Let's think for example, apart from the first title of this second episode, a LEGO Avengers. Many funny situations and the plots of the latest films have been wisely put aside, waiting for the auspicious times. They didn't even use them in LEGO Dimensions to be safe. So here we come LEGO Marvel Super Heroes 2 as a multi-platform, right in the company of Thor Ragnarock in the best cinemas. Not to mention that next spring comes the first part of the final chapter on the Avengers, which at this point will certainly be included as a DLC…

On techigames.com we have already offered you reviews of other LEGO titles, including the ambitious LEGO Worlds, but it is undeniable that the series, in the remaining chapters, has settled on several difficult clichés to move. As well as on some traits that seem to come back over and over again: infinite but always the same collectibles, linear progression and without ideas, difficulties at an all-time low. The first chapter of the LEGO Marvel series was trying to innovate, will the second live up to expectations?

Kang the Conqueror knocks on the door

The fictional premise of LEGO Marvel Super Heroes 2 it is the most banal you can imagine, in addition to having already seen it an unspecified number of times with the only variation of the bad guy on duty. This time it is Kang the Conqueror who wants to conquer (but come on?) The entire universe, with the help, among other things, of an army of henchmen from the four corners of the cosmos and time. The villain has in fact in his possession a tool capable of rewriting, violating and commanding the laws of the universe.


The first impact with the title, however, beyond repetitiveness, is one of the best. Enter the scene none other than the Guardians of the Galaxy in their LEGO version, complete with adorable Baby Groot (imagine the joy of children, doubled). The planet of the Nova agents is in fact the first to be targeted by Kang, and we will have to rescue the civilians. The first world (and let's not go further so as not to ruin what little plot there is) ends with the battle (a real boss fight in all respects) against a colossal Celestial, we will have to alternate the characters present and study the environment game to be able to knock him out. Nothing too difficult, as you can imagine. 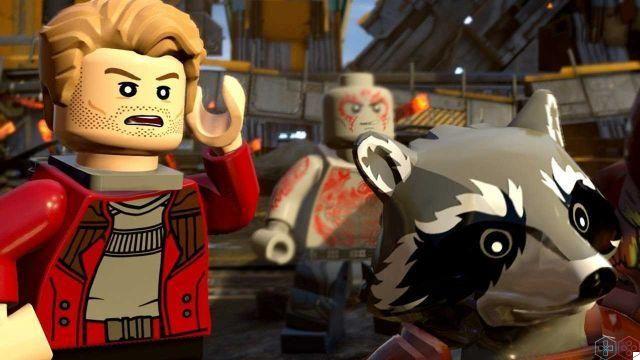 The point where LEGO Marvel Super Heroes 2 excels is the number of usable characters: more than 70 in all. There are all the super heroes of the Marvel world, even from spin offs of American comics, obviously not counting the main protagonists of the latest cinecomics (think of Thor Ragnarock and the next Black Panther, for example). After having unlocked them in the various levels of the main story, to use them just press the Triangle command on the PlayStation 4, and in Free Play mode we can impersonate anyone at any time. In addition to fun, it becomes a necessity, especially to be able to reach the high number of collectibles as always scattered here and there in the game world.


Where is the production flaw then, given that there is always a weak point at the bottom in LEGO titles? Always in the same place: in the repetitiveness and monotony that take over after just a couple of hours of play. Having a thousand characters available e the ability to play locally is a great plus, but doing it only in the canonical 20 levels of the game, not too vast, and with an artificial intelligence at an all-time low is not the best. Not to mention that too often the title becomes confusing, especially in the company of friends, resulting in a simple (and poor) smash buttons.


However, it is worth noting the possibility of playing in games of up to 4 players locally, a new feature introduced with LEGO Marvel Super Heroes 2. Too bad that the function has not been extended to the classic levels, but we imagine that at that point the difficulty of the game would have spiked due to the level of confusion reached. The graphic and stylistic details are valuable, for a technical sector that nevertheless remains anchored to the first results of the LEGO games of this generation, without any significant leap in quality.

LEGO Marvel Super Heroes 2, the verdict of the review

LEGO Marvel Super Heroes 2 is the right title to play without too many thoughts, perhaps in the company of children and family members. As usual, it has no pretensions whatsoever, but this does not prevent it from being a pleasant and long-lived title, given the high presence of collectibles. A graphic update would certainly not make sea the series, sooner or later, but for the moment we feel satisfied. Especially after the introduction of a cooperative / competitive mode in the company of 4 players.

7.5 Perfect for children and family

add a comment of LEGO Marvel Super Heroes 2 review, the most powerful heroes are made of bricks