The boys of Blooper Studios hit the mark with their new video game where madness is the protagonist. I present to you Layers of Fear

What is madness? What happens when you enter the sick mind of a painter tormented by a past mistake? This is the experience that the boys of the Blooper Studios they wanted to try to make us understand. Released February 15, 2016, Layers Of Fear has aroused very positive opinions both for the graphics and for the atmosphere created by playing it. Here is our review.

The key word is: exploration

No flashbacks. No explanations. You will not be given any clues about who you are or why you are so reduced. It will be you, exploring the various rooms of the painter's house, to put together the pieces of a dark past. You will thus discover the chilling crime of which you have committed and which has led you on a deep descent towards the center of madness, from which you will never be able to free yourself again.

But did I go from there?

The painter's madness will be your jailer. As soon as you start exploring you realize that something is wrong. The rooms will start to change. Entering a room via a corridor will not guarantee you will return to where you came from. In this way you will begin a journey inside what will gradually become an increasingly claustrophobic and delusional labyrinth. You will not be able to orient yourself and go deeper and deeper any attempt to be rational will vanish miserably.

Also diamonds play an important role in the game. Even before the rooms, they will make you understand that a normal person would not paint like this. You will see portraits of famous painters transfigured into a sort of monster. Paintings of dogs starting to bark before catching fire and showing a painting of a dog skeleton and so much more. They will be the protagonists of numerous jumpscare that you will undergo during your adventure.

No Jumpscare is a coincidence

Many horror games that I have played had the flaw of placing jumpscare at random. It was as if they were inserted only because, being a horror game, then every now and then you had to scare the player. This is not the case with Layers of Fear. Any scare you get will be related to the plot, but only if you are good enough to find out. Perhaps that shelf that has just fallen contains the combination to open a casket, or in that picture that has suddenly transformed there is a clue to discover the painter's past. It will be up to your glance to find out what lies behind it. And every jumpscare will make the viewer jump in the chair, since not only is it well studied but also thanks to the effectiveness of the sound sector

In a horror game, the main technical sector is the sound one. You can make the scariest environment ever created, but if you put the Teletubbies music into it it will lose all its effectiveness. And this the guys from the Blooper Studio understood well. They have been able to masterfully mix sounds and music that will keep the viewer in tension throughout the game, climbing slowly when a crucial point is discovered, or in the scariest parts disappearing totally leaving the viewer in a panic. Even the song that is heard in the game, which will be repeated several times, is perfect. Cheerful, catchy, it creates such a strong contrast within the game that it will be the one to make it even more disturbing. It reminded me very much of the children's song that unleashes the murderous fury of the killer in the film directed by Dario Argento "Profondo rosso".

The graphics surprised me. Being an independent studio, I didn't expect such accurate and realistic graphics at all. Textures and polygons are well defined, there are very few smudges and only if you look at them very closely. The lights and shadows are wisely mixed, to provide a creepy atmosphere and thus delineate the deepening madness of the protagonist. 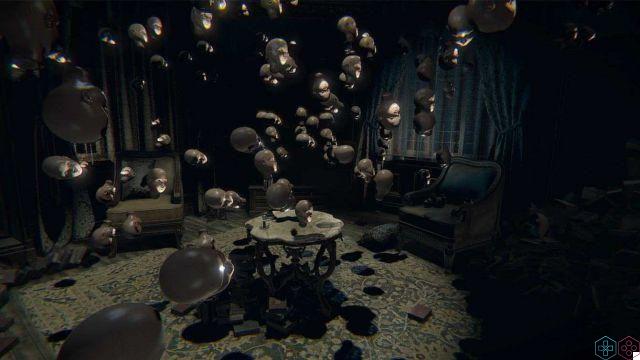 Animations to be reviewed

Although there aren't that many in the game, the few animations present left me a little disappointed. The animation of a possessed tent felt woody, and the movements of the mice were not as smooth as they should be. But being so few, they don't absolutely ruin the gaming experience.

Calling it a video game in my opinion is too much. The actions to be done are reduced to a minimum, the puzzles present within it are so easy which do not even deserve to be called such. But this was not in my opinion the goal of the game. The aim of the game was to scare and keep the player under constant tension and in this he succeeded very well. It's like experiencing beautifully developed horror firsthand, where you decide the times and the pace. This game deserves the success it has received and is absolutely enjoyable thanks to a well-crafted Spanish translation. If you like to play with your heart in your throat, and have heart attacks in the emergency room, this is the game for you.. It is available for PC, Xbox One and PS4.

add a comment of Layers of Fear review: madness and fear