Kragmortha Review, How to make friends hate you | Replaying

Are you looking for a simple, fun ... and warlike party game? Kragmortha is for you!

With the same characters as Yes, Dark Lord, Kragmortha presents itself as a fun board party game (if you like Munchkin you can't miss it ...) that will pit players against each other, yet all united against the evil Rigor Mortis ...

After failing the missions in Yes, Dark Lord, in this game the stupid goblins have to clean Rigor Mortis' room without disturbing him from his necromantic studies but, as they are idiots, they try to steal the spells of the Evil Genius. Will they manage not to be given the dirty looks? Let's find out in Replaying!

The game involves the use of:

Each player places their goblin token in the indicated space and draws 3 Movement cards. Rigor Mortis' pawn also goes in its place, the first player is chosen and then… The game begins!

Reach Rigor Mortis' desk as many times as possible. Or have another player get 4 dirty looks, which would cause them to lose the game. 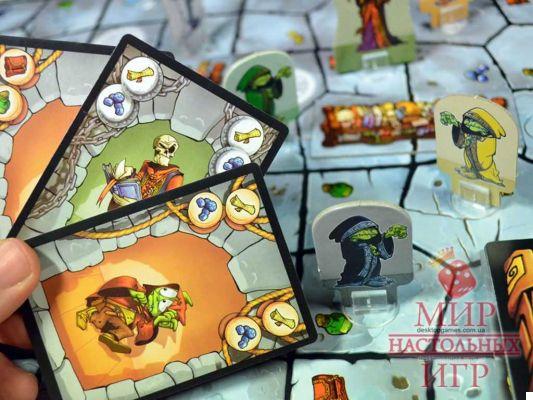 On their turn, the player can play a Movement card with a goblin (by moving their goblin), or play a Movement card with Rigor Mortis (by moving the sorcerer). Starting from his own square, the character to be moved (goblin or sorcerer) must move to a contiguous square with one of the two symbols indicated and then possibly onto a second contiguous square with the other symbol. Once a Movement card is played, another one is drawn. Alternatively, you can completely discard your hand to renew it, but lose your turn.

The goblins and the sorcerer then move across Kragmortha's board. During all these movements various things can happen:

Function of the various elements

A Teleport token has variable effects: it can allow you to teleport to another space with the magic circle, or give you a dirty look or a magic book card.


The Magic Book cards have printed a number of runes, useful for decreeing the final victory. These also allow you to cancel the curses of the glare or pass them on to friends other stupid goblins.

A Bad Look card always gives a physical penalty, a penance: playing with one arm, speaking with the tongue against the cheek, playing standing ...

If a participant collects four dirty looks, the game ends. Whoever, among the survivors, has the fewest Bad Look cards wins the game, in case of a tie, the runes are counted on the Magic Book cards.

Kragmortha looks like a fun party game, with great illustrations and good materials. The idea of ​​physical curses has already been exploited in other games, but still excellent and satisfying (for others). The duration is variable, and also depends on the number of players / trici, in any case not too long to bore or exhaust those who are cursed and if a game is too short you can always play another. To the detriment it can be said that, in the long run, the games are a bit repetitive ... 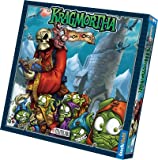 add a comment of Kragmortha Review, How to make friends hate you | Replaying