Kosmokrats Review: The Individual and the State

Kosmokrats is one of the most unexpected surprises of 2020 and wants to tell the conflict between the individual and the state: let's see how he fares in this review

We thought we broke up the Cold War behind us. It all ended with the collapse of the wall and the fall of the Soviet Union, or so we believed. Twenty-nine years later, however, the West discovers that it is still haunted by its old fears and here the historical myths of the past are reworked in a plethora of the most disparate works. After all we live in troubled times, in which the rise of nationalisms and dictatorships continually pushes to rethink the past.

As Kundera would say, in fact, History can have a single value, in literature, that is, that of possibilities. In every novel by the Czech author it does not claim to be real, but has only the task of characterizing the existential aspect of the characters. History is therefore an existential category, which acquires the value of truth regardless of the accuracy with which it is reconstructed. So why not rethink it in a science fiction key? And why not tell the story through the eyes of those who lived it behind the scenes? Kosmokrats also looks at history as an existential category: so we will try to analyze it in this review.

Re-reading the history of Poland, from Poland

It is certain that being born and growing up in Poland doesn't have to be easy. Communism, there, must not be a thing for middle-class boys with branded clothes and the latest generation telephone. One thing to give yourself a tone, that's it, as it is in use by us. In Poland, they experienced communism on the skin and tasted all its inconsistencies. Perhaps this is why the first work by Pixel Delusion, a young Polish software house, speaks of communism.


We like to think that this group of kids really had in mind reread one's own history as an existential category. How does the individual relate to the state? Does an individual exist without the state? Is it a state without an individual? What is the weight of an ideology in the behavior and choices of an ordinary man?

As we will see in this review, in Kosmokrats only the player will be able to answer these questions. 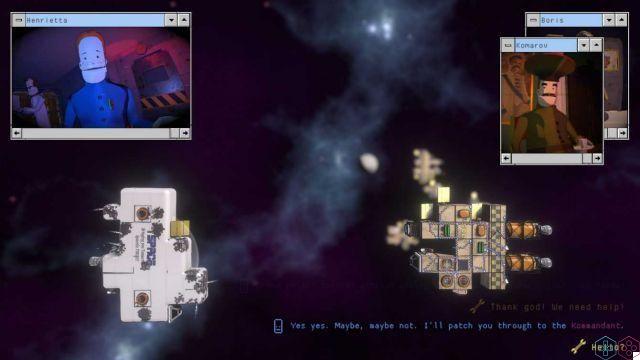 It is worth starting the review of Kosmokrats by talking about the most important object in any work of fiction: the characters. Who is the protagonist of the Pixel Delusion title? An unnamed potato peeler, a hero who represents the last level of the command ladder within the Soviet space fleet. The latter is preparing for a great journey into space, in the hope of find a new world to colonize and, at the same time, to defeat the bitter capitalist rivals.

Fortune changes our hero's destiny: the drone pilot absolutely needs to be replaced, but it will take some time. Until then, we'll put the potatoes aside and we will devote ourselves to the construction of complex orbital modules. It goes without saying that circumstances will lead us to occupy the new role for much, much longer than expected.

We understand well that at a certain point the individual-player becomes an active part of the state, participating in what we could call real production processes. Certainly a very capitalist term for what should be a communist utopia, you will agree with us. For the whole course of the game, therefore, we will not have to do is assemble the orbital modules by piloting our drone, ending up to influence the course of complex history with our mistakes and our choices basted by the Polish boys.

It is in this ideological inconsistency that the narrative essence of Kosmokrats is manifested: depending on our ability the resources of the space station (ie: potatoes) may decrease, leading the crew to starvation, or worse, cannibalism; and at the same time we will happen to make more voluntary and conscious choices, such as when we will have to decide whether or not to save a scientist of the opposite faction adrift in space, with all the consequences that this will entail.

There is a very strong narrative moment, however, which happens in one of the first sections of the game. While we are assembling yet another module, the Earth, in the background, is completely destroyed by a nuclear war. Dozens of atomic bombs begin to slowly corrode the planet e all of a sudden we realize that we are left alone with our companionsi - companions in every sense. The only hope is to find a new home, bringing with us all our ideological heritage, but above all our individuality. Again, History as an existential category of Kundera.

The freedom left to the player is very wide and allows you to change events in a very radical way, sparking a coup against our Kommandant, or pandering to the cybernetic ideas of a strange artificial intelligence built by capitalists. The cases take up everything one might expect from a science fiction work, but always with an ironic aftertaste which makes the beautiful dialogues written for the game even more enjoyable.

Individuality therefore becomes plurality when we realize that the other supporting actors also enjoy a certain level of characterization, which has nothing to envy to that of large-caliber products. Effectively, Kosmokrats is one of the most successful narrative experiences of this 2020, and we feel we can affirm it without too many second thoughts. We have rarely seen a similar discursive compactness in recent years, if we exclude essential masterpieces such as Torment: Tides of Numenera or the beautiful Prey. If we think that this is the first work of Pixel Delusion, the whole is even more surprising. 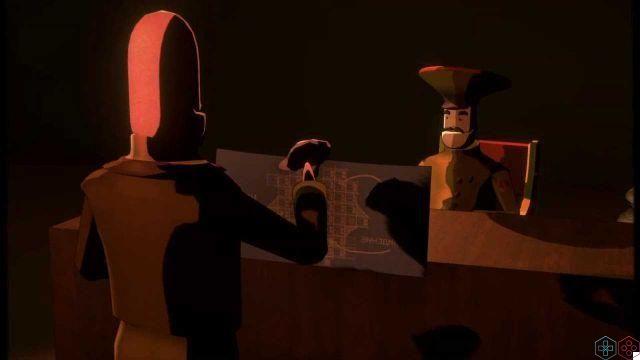 The Physics of Bodies - Kosmokrats Review

That said, what is Kosmokrats gameplay all about? Pixel Delusion have come up with a convincing puzzle game which will see us, in fact, engaged in the construction of various space structures useful for the Soviet cause. To do this we will have to check our drone - the use of a pad is highly recommended - trying to push the various pieces so that the connectors fit together. We will have the opportunity to grab some of these pieces, while consuming a certain amount of energy.

Finally, it should be remembered that each time we will have to complete the operation before the fuel of our drone runs out. The physics of the game, then, is particularly successful and brilliantly simulates the absence of gravity, allowing objects to move in a very believable and precise way. Even in this, Kosmokrats is really taken care of.

To this very simple structure, however, some interesting variations are added. We will have to be careful not to cause damage to the structures we will assemble, for example by avoiding destroying the potato containers (the astronauts' main food resource) or the transceiver antennas. If we fail a mission, the game will continue, but this will lead to inevitable penalties, including narrative. Destroying too many potatoes, for example, will lead the crew to starve and it will prevent us from getting any money.

With the latter we will be able to buy a fairly nice amount of collectibles, but also some food with which to avoid starving ourselves. What happens when we are in the drone command station is as important as the action in the field. Reading the newspaper on our desk or the reports of the latest missions we will learn very important notions, while playing some levels of One / Zero, the video game designed by a bizarre artificial intelligence, will help us to understand less its ideology through wacky philosophical dialogues.

The fact that in Kosmokrats there is a real game in the game, among other things, is an indication of how much this title is able to amaze the player continuously with new playful and narrative ideas at the same time. Also the sections in which we will use the drone will be enriched with variations over time - for example of annoying asteroids that risk compromising the operation - and sometimes some choices will be made in these situations. We have never seen a real gap between narrative and gameplay, therefore, and this is what makes Kosmokrats gameplay so immersive and engaging, even for those not accustomed to the puzzle game genre, and despite a certain repetitiveness - the only real flaw of the title. 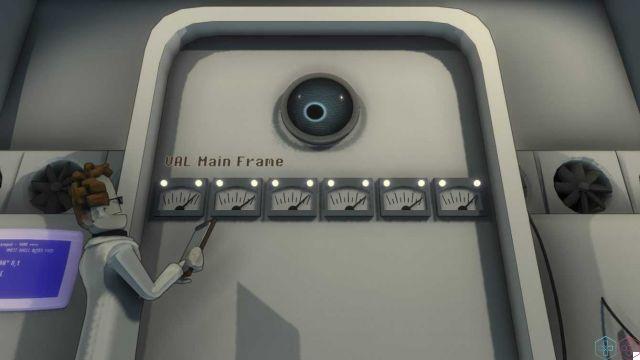 The aesthetic style of Kosmokrats that's what you might expect from a modern day indie title. The cel-shading used by the developers offers us very stylized characters and environments and very simple textures, which, however, contribute to enhance the ironic writing of the dialogues in a brilliant way. Old Soviet technology brings to mind some scenarios already seen in Ridley Scott's beautiful Alien, a classic of seventies science fiction. We are not in the world full of hyper-compressed cyberpunk data, but in a more sober classic science fiction, made up of sidereal and unknown spaces.

The game offers great dubbing in English - sadly the subtitles are not in Spanish either - but it is in the soundtrack that it reaches one of its highest peaks. Halfway between synthwave and extensive reflections on the spatial vastness typical of a certain modern ambient, Kosmokrats offers a plethora of high-impact songs, among which we like to remember above all Val, a delicious song that many will not struggle to approach the iconic “Still Alive” of the first Portal. Also thanks to these fantastic melodies, in short, the final experience is really successful. 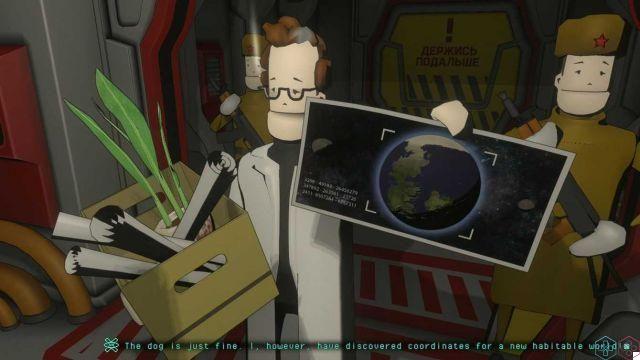 And where do you come from?

In short, having come to the conclusion of the Kosmokrats review one wonders where we had lived all this time. Probably, taken by the run-up to the next generation, most players will have no way of trying or even knowing what is in effect a masterpiece - here, we said it.

The debut of Pixel Delusion is anything but a disappointment and indeed gives us an incredibly deep and engaging narrative experience, rich in themes and branches, supported by an original and sufficiently well-finished gameplay. Finally, the excellent aesthetic and sound sector does not make us regret the low-budget nature of the product. Definitely, one of the best titles you can try this year.

Will you give Kosmokrats a chance? Let us know in the comments and stay on the techigames pages for any further information on the world of video games.

Kunai review: the adventure of the deadliest tablet in the world ❯

add a comment of Kosmokrats Review: The Individual and the State