The first Knack was not convinced. With this second attempt, has the Sony exclusive managed to deserve the attention of the public? Let's find out what Knack 2 is like!

As we already told you in our analysis of the Knack 2 demo, the first Knack had "heavy" flaws. This second title tries to be forgiven and to broaden the too thin formula of the predecessor. To some extent it has succeeded, although we still cannot count it among the best games of this generation.

Knack 2 is an action platformer developed by SCE Japan Studio. At the head of the project we find once again Mark Cerny.

Knack 2: where did we break up?

Knack 2 restarts some time after the events of the first chapter. The game begins by explaining to us in very general terms that Knack and Lucas saved the world. Lucas is a boy, Doc's assistant: a scientist who created Knack from ancient artifact technology.

The story opens in Newhaven, the great city where our heroes live. The metropolis is under attack by deadly robots and Lucas blames himself for the ongoing disaster. After this first phase, which serves as a tutorial, we will go back to six months earlier: how did we come to a robot invasion? Why is it Lucas' fault?

The truth is, storytelling is the weakest point in the game. Knack is completely devoid of personality and will only say a few words throughout the game, just to remind us that he is not dumb. The human supporting characters support the various vases with dialogues and commenting on what happens: unfortunately everything is extremely flat and not very incisive. In general, the events that will push Knack and his companions to wander from one place to another will not interest us very much. You will not be able to bond with the characters and their adventures. 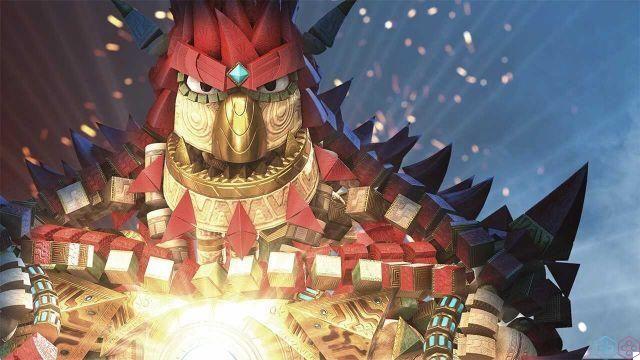 Let's talk about the game environments: another weakness of Knack 2. On a technical level, the game is more than enough, especially as regards the main characters and the effects of light and particles related to the transformation of Knack. Polygonal textures and models will never be badly made, but at the same time there are no particularly interesting views.

Speaking instead of the style of the settings and the enemies, it must be stated that the development team was not particularly inspired during the work. The enemies are all in all quite varied, including goblins, robots and strange animals, but there is nothing really unique and particular. The settings, enjoyable with their bright colors, will mostly be natural environments, plus some urban locations: among woods, caves and deserts, there will be few sections that will attract our eye.

Overall, the visual appearance of Knack 2 is slightly below average. The frame rate, at least, is freely selectable between 30 fixed or variable. I opted for stability. HDR can also be activated on PS4 Pro.

Even the dubbing and the music do not excel, being quite generic.

Knack 2 si divide in platform, fighting and sections puzzle. To these must be added rare stealth phases and even rarer phases in which armed vehicles are driven. In general, the mix of elements is regular and well managed. But let's see the various components with a little more precision.


Fortunately, he skips a little more

The platforming stages of Knack 2 are generally quite simple. We will be asked to jump from one platform to another, according to the most classic canons of the genre. The camera is fixed and performs well on average. These stages are enjoyable and the occasional deaths we will face will never create problems, thanks to the excellent checkpoints that do not force us to repeat long sections.

It must be said that if you are looking for a deep and difficult platformer, we certainly cannot find it in Knack 2.

In addition to jumping, the environments will be loaded with very rosy puzzle game stages. We will generally have to move crates, activate switches and take advantage of the pieces that Knack can leave behind him to manage counterweights and buttons on the ground. It will also be important to keep an eye on the surroundings for narrow hidden passages that Knack can crawl into to find a chest. Inside this we will find a piece of one of the gadgets: obtained all the pieces of a gadget we will get a new ability.

These game sections are simple but enjoyable in the overall mix. 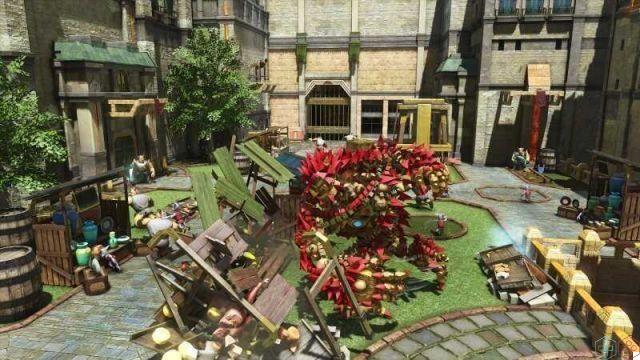 The main course is a fruit salad of punches and kicks

The real main game element, however, is combat. Knack has various moves from the start, including kicks, punches and saves. The fights are lively and well balanced: as mentioned in the preview, at Easy or Normal everything runs smoothly without particular problems, while at Difficult things get more interesting. The latter is the difficulty level for which I opted: I am convinced that it is the best solution for most players. The difficulty is, in this case, a stimulus to take advantage of all Knack's moves and to commit a little more, thereby earning in fun. Our life is self-reloading: a great choice that eliminates any frustration in the event of a long string of challenging fights.

There will also be bosses, unfortunately there are only four and only two are at least interesting in terms of mechanics.

So many moves for Knack!

In the course of the game we will break solar crystals which will give us an extra barrier. Special crystals will appear in specific places: breaking them we will become invulnerable and get super moves to make a clean sweep of the enemies. These are unmanageable phases since the crystal will automatically disappear shortly after: it would have been more interesting to be able to decide in which phase of the fight to use it. As it stands, they are just phases in which you find yourself hitting the keys as fast as possible to take advantage of the temporary bonus.

Another variety will be donated from the increase in size of Knack. From less than a meter to ten: although the combat does not change, the differences in size are stylistically interesting and it will be satisfying to see enemies that until recently were huge and powerful, give in with a few hits. To all this must be added the special Knacks: at specific points Knack will have access to materials such as iron and ice that will grant unique abilities.

The moves available to Knack will continue to increase over the course of the game. Some will be given to us automatically, others will have to be unlocked by spending skill points. Let's see how it works. 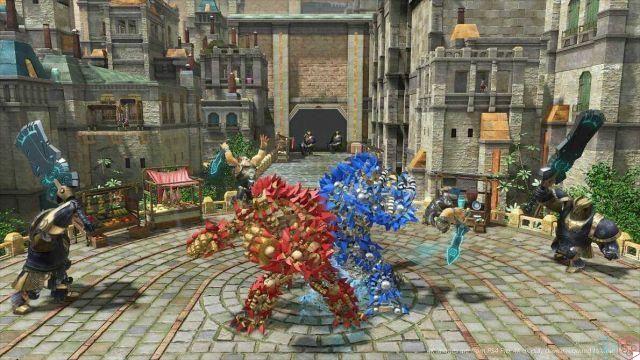 Knack 2: get stronger, step by step

By defeating enemies and finding specific chests, we will get experience points: these will turn into a skill points to spend to grab a skill within four branches. Unfortunately, you can't get the skills in the order you want them most - to unlock the next branch, you must first get all the skills from the previous one. This choice was certainly designed to keep the game more balanced: it is an understandable solution that pays off, but it wouldn't have been bad to have total freedom.

Skills are upgrades of the ones we already have (more damage, more speed, etc.) but also new moves: It is good that new combat solutions are obtained throughout the game. These skills guarantee greater variety. We'll also be upgrading our super moves, finding special stems throughout the game.

Gadgets are few, but the related skills are useful. In addition to these, always through the chests, we will be able to unlock Crystal versions of Knack. Each version of Knack has unique abilities to exploit: another variety, always welcome.

Knack 2: Once the game is over, the game begins

Knack 2, of course, not lacking in content. The mix of fights, platforms, and puzzles is well managed and lasts all the time. After the story, however, we will not only have to look for the chests that we have lost through the useful map of the world that allows us to replay a single level.

In fact, they will unlock five timed challenges who will ask us to walk through the platform sections and three battle arenas in which to defeat as many enemies as possible in waves. Getting the maximum score in these stages will require you to take advantage of the special Knacks and all unlockable skills, as well as trying over and over again.

Furthermore, each level of the story offers three challenges (finish within a certain amount of time, find all the chests, take down the enemies in a specific way ...): they are not very easy to complete.

To all this is added the Cooperative mode: A second player can be added at any time to help you. There are some combo moves that make co-operation worthwhile and fun. It is a good addition, perfect for those who play with brothers and sisters or for the parent who wants to follow their young child while they play.

Certainly Knack 2 tries not to let us go away once the story is over.

Knack 2: who should buy it?

Knack 2 is a title that lacks a bit of style and character, but that's it he lets himself be played with tranquility and taste. Certainly, Action platformers will find many hours of fun in Knack 2 especially if they are interested in completing the game one hundred percent. I needed about 12 hours to complete it on Hard: it must be said that I have died many times and have found most of the chests. Those who normally play fast and low difficulty will take less than ten hours.

If you are not a true fan of the genre, however, it is possible that the game is a bit repetitive, especially in the final stages.

We conclude by thanking Sony Playstation for kindly granting us the code to review Knack 2.

You, however, what do you tell us? Are you going to play Knack 2? Tell us in the comments!

7.7 Great for fans of the genre

add a comment of Knack 2 review: a few steps forward