Kirby's Blowout Blast has arrived. Twenty-five years don't happen every day, e Nintendo he is dedicating to his little pink ball all the celebrations it deserves. A few months ago, always on Nintendo 3DS, a fremium title focused on local and online multiplayer; now a real hybrid minigame between puzzle and action, based on bounces, swallowed enemies and stratospheric scores to accumulate

Kirby's Blowout Blast is something we have already seen, exactly one year ago in Kirby: Planet Robotbot. But back then it was called the "Kirby 3D Challenge", and it was little more than a side-by-side content to the real single player offer and Planet Robobot story mode. HAL Laboratory substantially it returned to this secondary modality, strengthening it, revising it, enriching it in such a way as to be able to re-propose it as a “separate” content, disconnected from the context in which it was born.

Oh, well, as long as it comes to Kirby, Mario e Zelda we are fine with everything right? Any new game, mobile or console, so be it! And if we can take a Kirby minigame under the umbrella, what's wrong with that? Especially since it will certainly not be this small secondary production to divert attention from the real main dishes arriving respectively on Nintendo 3DS (this winter) and on Nintendo Switch (during 2018).

Kirby's Blowout Blast is not a triple A e does not want to be. It does not even cost as much as a triple A, rest assured: with just 6,99 euros you will make it yours in digital delivery on Nintendo 3DS (or any other device of the family). It was not released in physical version in any store, we are sorry for the collectors, but let's try to face reality: it was the optimal distribution method for a "contained" product, where boxed marketing would have only unnecessarily increased the costs of distribution.


In short, in this small production, what should we do? It will be enough to guide Kirby from the beginning to the end of a certain level, content and rich in platforms. No doubt about the direction to take, every path has already been traced, impossible to go wrong. What matters, however, is to eliminate all enemies along the way, earning points after points thanks to kill combos. 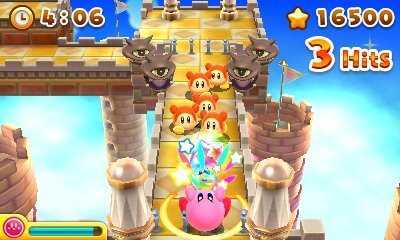 It looks like the classic Kirby 3D, but is not so. To begin with, the goal is not to reach the star at the end of the level. Secondly, our hero although aspiring enemies along the way never transforms into the usual powerups. Kirby Fire, Ice and Electric are just a distant memory. Our pink ball will have to "simply" (but in the higher difficulty levels this is easier said than done) sucking in one or more enemies at a time then spararli and hit others, accumulating points. At the end of the level we will be able to view the score and we will be awarded a "cup", bronze, silver or gold depending on the performance.

Here the “strategic” component intervenes, if it is possible to call it in such a title: to accumulate as many points as possible there are some precautions. Sometimes the enemies are arranged in the level according to certain positions, and in hindsight it is possible even hit them all together with a single, well-calculated shot. Or again, by sucking in a single enemy we will automatically be able to hit only one (then the shot will be stopped) but by sucking two of them we will create a theoretically unstoppable chain, where no opponent can stop our shot.

A gun is not enough, you need a gunslinger

Kirby's Blowout Blast it's not just a question of who's best at shooting sucked-in enemies. The score is not only determined by the number of combos obtained, but also by other factors. For example, the number of opponents eliminated: you can be really good at aiming, but if you leave even one enemy alive you will automatically lose the bonus you would get by taking them all out. Yes, even those theoretically invincible. 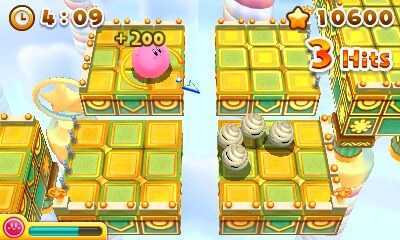 Again, at the top right of the levels a timer is indicated: completing the picture within a certain period of time we will get speed bonuses that will be added to the final score. Lastly, if Kirby will not have not a single blow immediately during his mission along the path prepared by the developers, you will get the fourth and final bonus. If you are aiming for gold on all levels, you will need to keep all factors in mind.

And gold won't just interest completists - you'll need to first unlock the bonus levels in each world get the maximum score in each of the levels that make up the world in question. Including the round boss battle, at the end of the four main levels of that game box. These are not too demanding clashes with canonical enemies of the series, which fans will surely recognize right away.

8 Aspire them all, Kirby!