After Pokémon, we allowed ourselves a double: here is a top 5 "creepy" to celebrate Halloween in the company of Kingdom Hearts

And nothing, we could not resist: it is evident that a single basket of cakes in the shape of a Pokéball cannot be enough, and so we started to draw up a top 5 for Halloween all dedicated to Kingdom Hearts. Ours was a forced choice: the arrival of Sora in Super Smash Bros. Ultimate, after all, brought with it not only a tournament for rookies seen for the first time on Nintendo Switch, but also the announcement of the saga (albeit not without compromise) on the hybrid console. Don't turn up your nose: when the ones who shot Bambi's mother and the creators of Jenova get married, some thrills always escape.

Also in this case we will fix some rules. As always, no creepypasta or fan-made adult reinterpretations: you won't find here the version of Axel seen in the webcomic Ansem Retort, for example. Maybe we didn't say that with Pokémon, but just in case: just one example per game. Third rule, no examples from the most obvious worlds: you will not find anything from the City of Halloween or from Mostropolis. Finally, we will limit ourselves only and only to the scenes of a normal playthrough: the optional bosses (not even those included in the plot, such as Sephiroth in Kingdom Hearts II) will not find space here (but the spoiler Yes). If you are ready, let's get started!

The first Kingdom HeartsWhile Squaresoft was still testing the waters with Disney at the time (prior to their marriage to Enix), it lends itself well to the Halloween top 5. We could have chosen any time from the endgame revelations. The Dark Fortress, now the scene of clashes between many videogame icons in Super Smash Bros. Ultimate, still hosts some disturbing locations, and the same goes for The World's End (“End of the World” in Melody of Memory). We, for the sake of going against the tide, have seen fit to go back to the beginning.

La City of Mezzo, already depressing in its own right as a land of refugees, it did not take long to set the record straight. One of the non-player characters Sora met, the store cashier (before Cid from Final Fantasy VII replaced him), sadly does not survive the entire period of Sora's first visit. As soon as the latter enters the Second District, in fact, the clerk shows us how the Heartless Emblema are born: tearing people's hearts, leaving behind a lifeless body and with a facial expression contrite with terror. Welcome to the game, little ones! 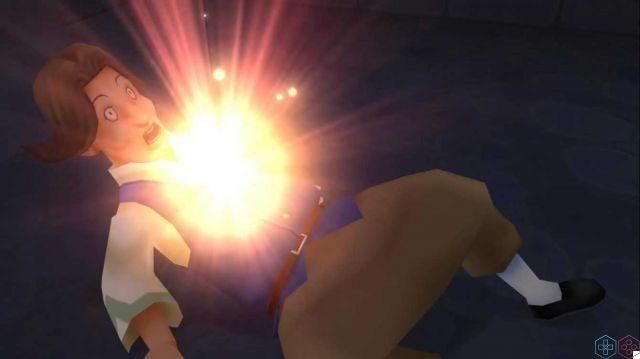 Number 4: the end of Zexion and Vexen - Kingdom Hearts top 5 for Halloween

One of the most depressing episodes of the saga is also the first released on Nintendo consoles, and Kingdom Hearts: Chain of Memories earns a "double" position in our Halloween top 5. In Sora's story we are dealing with the inglorious end of Vexen, even before it was known of the rebirth of the members of Organization XIII. Axel, a subordinate of Vexen, subtly threatens the imminent execution of the latter. While the latter is about to reveal to Sora the existence of "little brother" Roxas, Axel wastes no time and mortally wounds him.

See for yourself whether you prefer a shot to the throat (GBA), open flames (PS2) or a total perforation (manga). In the story of Riku, however, we learn how the copy of the antihero ends Zexion. Always pushed by Axel (naturally) to do so, the copy of Riku decides to take revenge on those who have kept his nature as a living puppet hidden from him. The PS2 variant of the scene, in which Zexion's legs swing from above in a way not unlike a hanging, is of undoubted impact, but for minimalism we prefer the management on GBA: the dark, the scream of Zexion, the sound of a sword and silence. 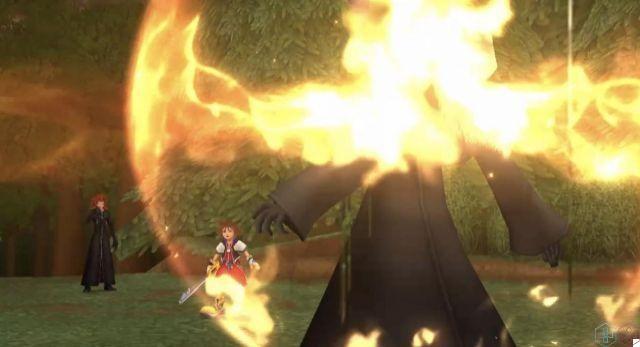 Call ours top seven if you prefer, but we couldn't help but use two characters to dedicate a corner as well to Kingdom Hearts: Birth By Sleep. The dark side of Ventus, or the cruel Vanitas, boasts the distinction of being one of the most disturbing Square-Enix antagonists (and, with Parasite Eve around, that's saying a lot). The character was created by Tetsuya Nomura because Sora's Japanese voice actor Miyu Irino wanted to voice someone other than the usual Boy Scout. Mission accomplished: sadistic, perverted and, given some of his laughter, even outside like a balcony, Vanitas offers this and more.

But, you know, a good teacher makes a good student. Master Xehanort, antagonist of the saga until now, is one of the characters with the most pronounced planning skills ever seen in a video game. He knows how to be sneaky and foresee every move of the heroes, carrying out a plan that also includes the theft of the bodies of others. When does your opponent ever murmur "Only now have I truly won" at the end of a battle? The late Leonard Nimoy (BbS, 3D) and Rutger Hauer (III), as well as Christopher Lloyd (III: ReMind), did an excellent job of voicing a cool, calculating veteran with complete mastery over the dark. 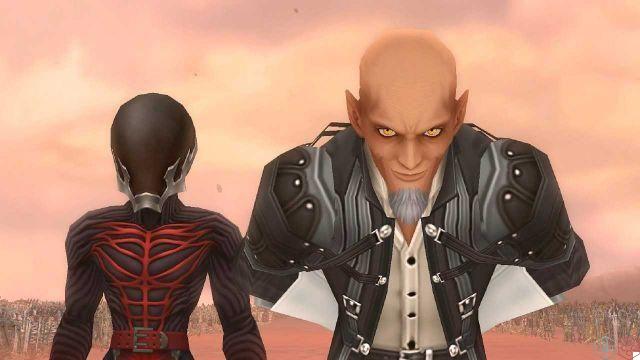 Compared to other chapters of the saga, it is possible to define Kingdom Hearts Re:coded directly as “light-hearted”, thanks to its more relaxed story (Castle of Oblivion permitting) and the emphasis on gameplay ideas that make the saga so fun to play. However, shadows are not lacking even here, if you remember what we mentioned on the Castle of Oblivion. At the end of the game Roxas is given the unprecedented role of seat manager, but it is not the furious cynicism that the character pours into his appearance in this game that we would like to give second place.


The "prize", if you like, is all for Agrabah. The world of Aladdin is not exactly what we would call "scary", on the contrary: usually, lack of non-player characters aside, it is always a lively place. Not surprisingly we used "usually", though. If you have ever found Yoko Shimomura's songs A day in Agrabah and Arabian Dream irritating (but we doubt it), rejoice: as soon as bugs start infesting the digital version of the magic lamp, the ocher-colored city turns a corpse green. , forcing the virtual Sora to look for Jafar with a timer and in total silence, between one jumpscare and another. 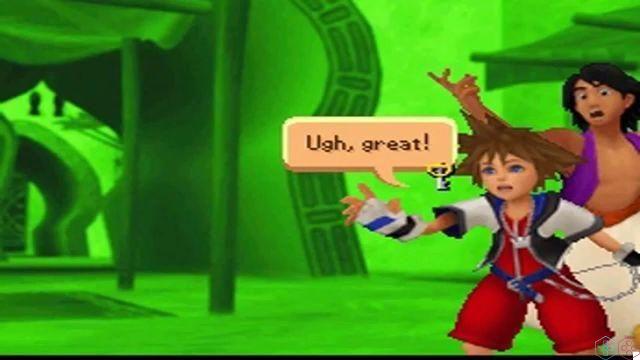 The horror medal for our Halloween top 5 goes to Kingdom Hearts 3D: Dream Drop Distance. If you've followed the saga up to this point, you'll know that characters who wear an X on their clothing tend to have a bad end. And sadly, Sora's new clothing implements this design choice. Although the torment by Organization XIII is repeated in all the worlds, it is in the dormant version of the World that Doesn't Exist that our messianic figure is constantly at the center of emotionally devastating psychological torture.

A fleeting encounter with Xion, which leads him to unconsciously cry without even knowing her, is the tip of the iceberg. Reviewing Roxas leads him to undergo a sort of epileptic seizure, while his counterpart transmits memories of the distressing plot of 358/2 Days in the space of a few seconds. Finally, a temporary hallucination leads Sora to the abyss of his confusion, deluding him that he is Ventus while the latter runs after the mirage of Terra and Aqua. It should come as no surprise to anyone if his confrontation with Xemnas reduces him to the status of vegetable, while Young Xehanort collects "what's left" of him. What can I say, sweet dreams from Disney! 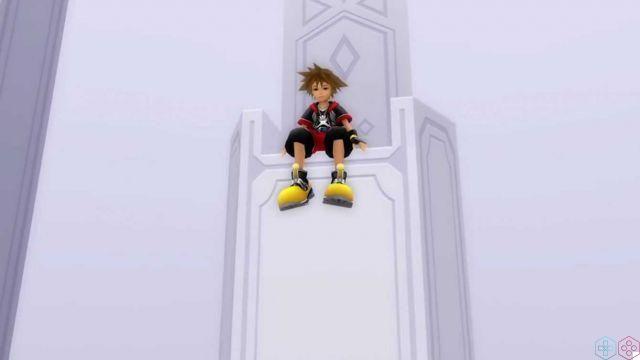 Now it's up to you to tell us yours: how would you have drawn up the top 5? Let us know below, and as always don't forget to stay on techigames for all the most important news for gamers and more. For your purely gaming needs, you can instead find the best discounts in digital format on Instant Gaming.

add a comment of Kingdom Hearts: the top 5 perfect moments for Halloween