In this review we discover Kingdom Hearts III in every detail after waiting for it for a long time. Will it live up to expectations? In our opinion "ni"

As big fans of the saga, we have been seized with mixed emotions about this title since before its release. We spent many years waiting for this chapter, and even more the expectations that we had built in the meantime. But without being too romantic let's get to the point, and let's discover Kingdom Hearts III in this review.

After an endless series of intermediate titles we are in front of the "final" chapter. Kingdom Hearts III is the title that takes us back to childhood. The release of this game was not easy at all, during the development everything and more happened, even a change of the graphic engine. Despite this, Kingdom Hearts III looks good and from the first moments it turns out to be a very enjoyable title. We will be immediately catapulted into the adventures of Sora who, together with Goofy and Donald, will be intent on regaining their strength for the final battle. Around this simple guideline revolves the plot of the game which is really full of intrigue.

In Kingdom Hearts III we will be intent on exploring different worlds of Disney and beyond. The first impact with them was a sincere "wow". All worlds are truly immense and each of them has its own sub-plot that ties into the main story. In our adventures we will meet many different characters and we will have an important part in their history and evolution. The various worlds are treated in detail to be faithful to Disney films, while the plot of the world is revisited in a more or less profound way to adapt to Sora's entry into it. Which is very nice as it makes the player more involved. However, there is a difference in treatment for some worlds, not everything is on the same level. There are worlds that are truly impeccable, others that instead leave a sense of dissatisfaction due to less attention to detail. 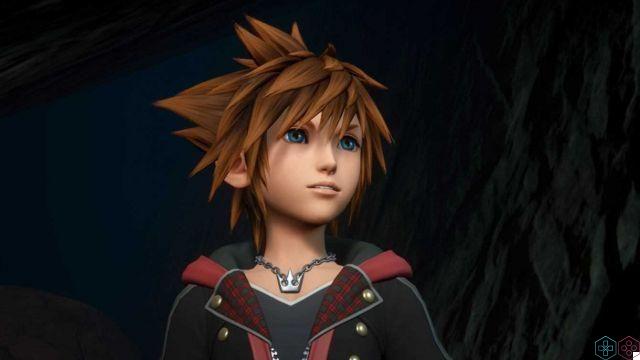 The transition levels between one world and another are interesting. Our Gummiship will be more aggressive than ever and will lead us to explore different spaces. The freedom of movement with the Gummiship will be total, even if the controls often leave something to be desired. The boss fights of these levels are repetitive but not boring, each enemy will have a different way of attacking and this will force us to learn a different way to approach the battle.

Kingdom Hearts III: Simplified But Not Too Much | Review

Another intriguing idea is represented by the possibility to use different Keyblades. These will have not only different aesthetics, but also different characteristics, combos and "powers". The choice of in-game inserts brings a lot of variety to the gameplay and makes it more intriguing. Using the battle-ready Keyblade can make it a lot easier, in the same way the choice of an unsuitable Keyblade will make it much more difficult. The choice of equipment will make the difference. The role-playing component on the one hand has undergone a simplification, on the other hand it has become more accessible. 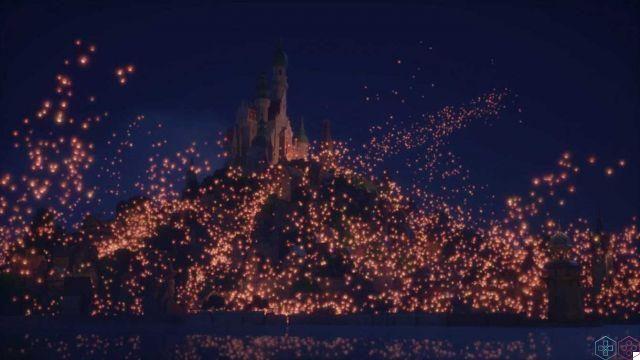 With each level-up Sora will learn new skills and at any time we will be able to combine them to make our character suitable for the situations we are going to face. Beyond that there are several interesting mechanics, such as bond mechanics. Through these it will be possible to summon the help of a particular Disney character and exploit his skills in battle.

Each character has different characteristics and manages to be more or less effective depending on the type of enemies we have in front of us. The spells, as usual, are well structured and very effective in their simplicity of use. Even spells, however, will be used wisely, making the most of the intrinsic characteristics of the magic we intend to use with respect to the situation that arises before us.

Now let's talk about situational combos: they will be linked both to the Keyblade in use and to the characters of our team. Anyway we will have several co-primaries who will help us in the battles and together with them we could perform different combos. Clearly there are combos that are stronger than others even if none are ever useless: it all depends on the choice of timing. The situational combos will in fact be usable in a certain window of time so as to be able to use them in the most favorable moment.

Another great novelty of Kingdom Hearts III is represented by the Gummofono, replacement of the classic Grillario. This is a small tool is a kind of smartphone available to Sora. Through the latter we could take pictures and even play with a series of mini games. The Gumphone is an innovative way to introduce extra optional material for the player, and also a clever way to hide a number of secrets. Clearly the news of Kingdom Hearts III does not stop there, the inventory management has also been changed and a new "friend" has been introduced, ready to cook for us. We leave you the pleasure of discovering all this.

Kingdom Hearts III is clearly a title with a very cinematic cut as the cut-scenes are omnipresent in the title. What usually shows in such titles is the stark difference between the pre-rendered scenes and the rest of the game. Usually the first ones are on a totally different graphic level creating a detachment with the title itself. However, this is not the case with Kingdom Hearts III. 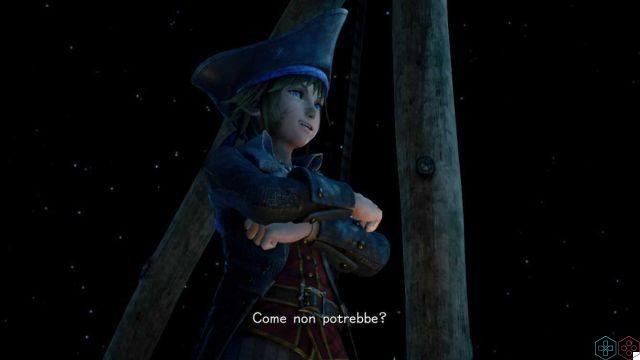 In Kingdom Hearts III we have graphics so curated that they show a constant continuity between the pre-rendered scenes and the rest of the game. This continuity makes this title splendid as a modern day CGI film with the added bonus of being fully interactive. This alternation of gameplay and cut-scene phases is very pleasant and tends to involve the player particularly.

Unlike many other video games, Kingdom Hearts III always manages to keep the player's attention level high. The soundtracks, as per tradition, are splendid and perfectly apt at every juncture. The work done to honor the Disney worlds and animate the various characters has been truly extraordinary, offering one of the best technical sectors in recent years. The saving system is also very intelligent and if on the one hand there are the classic fixed saves, on the other there is an auto-save function. In the event of a game over we will be able to resume the game from the last event that took place and without having to resume from the last save.

This little foresight makes the title extremely enjoyable. Telling you about the plot of Kingdom Hearts III without spoilers turns out to be impossible. We can only tell you that the plot starts very slowly and then gradually reaches increasingly frenetic rhythms in a continuous crescendo of information. We will meet several heroes of the past, with a development that will bring everything to the right place in view of the grand finale and then leave you with many questions and no answers. After all, this is now a consolidated tradition for the Kingdom Hearts saga.

Kingdom Hearts III: The Darkness Between Us | Review

If so far we have simply told how much good there is in Kingdom Hearts III, now let's move on to our criticisms of the title. We ran our test on the Xbox One S and actually encountered several problems. The frame rate was often not completely stable (in both modes made available by the title) and unfortunately we had several crashes of the title itself and also problems starting the same. Intrigued by these issues, we carried out a small investigation on the PS4 version of the title: this would seem to be more stable by presenting these issues less frequently.

Moving on, we didn't like the room management. This is often confusing (not to say terrible) especially in the final stages of the game, making some clashes difficult. Especially with the boss fights the camera sins in an objective way, even making our shots fail. The lock system, on the other hand, is almost useless. It will never engage on the desired enemy but will go almost "randomly". Which is a real shame since, especially in clashes with multiple enemies, a working system would have made them much more enjoyable. The quests scattered around the worlds are all interesting but some are extremely boring and repetitive. 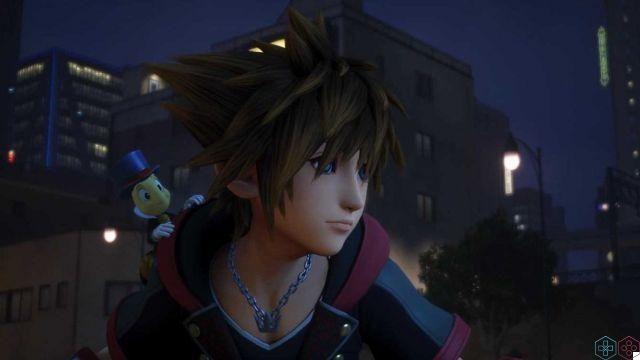 In addition, to complete the collectibles we will necessarily have to turn a posteriori in the worlds already completed because in the unfolding of the story not all areas will be accessible. Kingdom Hearts III works for binary too. The care in the realization of the worlds is then very fluctuating, Toy Story and Monster & Co were done really badly compared to the others, resulting closed and too linear when you return to complete the exploration.

With regard to the plot then we have a criticism to make. The game starts really slow and then turbo starts. In this final acceleration many important elements (which we have been waiting for for years) are treated with a disarming superficiality. Even some end game scenes have a subdued realization and bad animations that clash with the rest of the game: seeing a heartless moving at 5fps with worse animations than those of the first chapter on PS2 really makes your nose turn up. In our opinion, it would have been better to maintain a slower pace and at the same time give each element the attention it deserves. But you know, you can't have everything in life! After all despite these flaws Kingdom Hearts III is a very valid and above average title compared to current productions.

We have reached the end of the journey and it is appropriate to say: better late than never. We have waited a long time for Kingdom Hearts III and we were happy to have in our hands a valid product which, despite several problems and defects, turns out to be very enjoyable.. What we hope most is that such troubled development will no longer occur for the sequels to this title. The tracks left open by Kingdom Hearts III are in fact many, we only hope to be able to see them in the not too distant future.

Returning to the title, we strongly recommend the purchase. If you have always been a fan of Kingdom Hearts you will find peace of mind in finally seeing the ending of the story that accompanied us in childhood. Conversely, if you have never played a Kingdom Hearts, our advice is to recover the previous chapters (at least the main ones) and then throw yourself on this final chapter. Kingdom Hearts III explains past events and for some this may be enough to throw themselves headlong into this chapter. The choice is yours, the important thing is not to miss this undisputed masterpiece.