Kingdom Hearts returns exclusively to PlayStation 4 once again, offering an almost complete package of the adventures of Sora, Goofy and Mickey Mouse. But is Kingdom Hearts HD 1.5 + 2.5 ReMix really what fans of the series (and others) currently need? Or is it yet another attempt to monetize a very famous brand? Let's find out together, in our review

Last January, Kingdom Hearts 2.8 Final Chapter Prologue arrived, under the illusion that soon we would know something more about the third chapter, the final one, the one in which everything will be revealed, what Square-Enix and Nomura have been promising us for years. The publisher's main site, gorgeous as it is, doesn't help us in this regard. It was and still is illusions, in fact: we still know very little about the release, and in the meantime the saga celebrates its 15 years probably offering a nice gift to most. This gift is called, in a very complicated way, Kingdom Hearts HD 1.5+2.5 ReMix Collection.

Kingdom Hearts HD 1.5+2.5 ReMix it is basically the collection released during 2013/2014 on PlayStation 3: from the content point of view we will see how practically nothing has been added, except for some minimal updates. Updates that were not desired in the graphic / technical / stylistic sector, with the definitive achievement of 60 frames per second and a simply outstanding visual quality.

“Why should we buy the original game remastered remastered?” You may be wondering. And it is easy to say: there are two reasons to go back (once again) up Kingdom Hearts 1.5+2.5. The first reason is that the collection includes the main chapters of the series, that is Kingdom Hearts 1 e Kingdom Hearts 2. It does not take a genius to understand that, without playing these, you will understand very little of the final title "coming sooner or later". And it also includes quite a few side titles, which have come out for handheld consoles over the years. Fans will know better than us how, in the last 7 years, the series has fragmented on a large number of consoles, even from different manufacturers, preventing players from being able to follow it on a single medium. To overcome this problem, all the titles have been collected in an edition on a single console: the PlayStation 4, precisely. And before that, on the PlayStation 3. 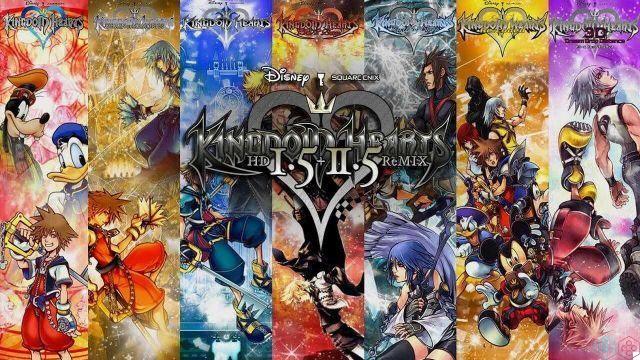 Second round, second question: "Okay, but what if I've already played the titles on PlayStation 3 in the last re-release of the same name?". Here, this is a nice question. As we said, in terms of content nothing has changed since the collection a couple of years ago. But technically something has changed: for example, the granite 60 FPS have been reached on PS4, the images are cleaner, in short, the qualitative and visual detachment can be seen quite a lot. You have to decide if it is worth spending another 50 euros for a new general smattering before the grand finale. Which, however, will keep us waiting a little longer, if things go as they seem to go: so you will also have time to wait for a nice discount.

More than concentrating for the umpteenth time in telling you a story that you will already know, that of King Mickey, Donald, Goofy, Sora and company in the war against the Heartless, a story of hope, friendship and destiny of all the worlds of fantasy, let's analyze in detail the contents of this collection and the technical differences compared to the previous one. So what does Square-Enix collect in the latest collection before the final chapter? This is the real question to ask.

We come to the contents

First of all we have Kingdom Hearts 1.5 e 2.5 Final Mix, without a doubt the absolute protagonists of the collection, the two true supporting stories. When it landed back in 2002 on Playstation 2, Kingdom Hearts literally melted the hearts of all RPG fans, it turned out to be a conceptually and artistically complete, exciting, fairytale, dreamy title. The restored version of Kingdom Hearts Final Mix today embraces the graphic modernization and refresh of some game mechanics, giving the player a well-finished product.

The graphic update allows the two Kingdom Hearts Final Mixes to offer a clean and more than sufficient visual quality, presenting bright colors and finishes that make the game experience visually detailed; shame about the absence of the anti-aliansing filter that slightly dirties the scene, but does not undermine the overall quality. Excellent work instead, for the sound quality, a completely remastered soundtrack makes the gaming experience unique and the overall work manages to excite once again. 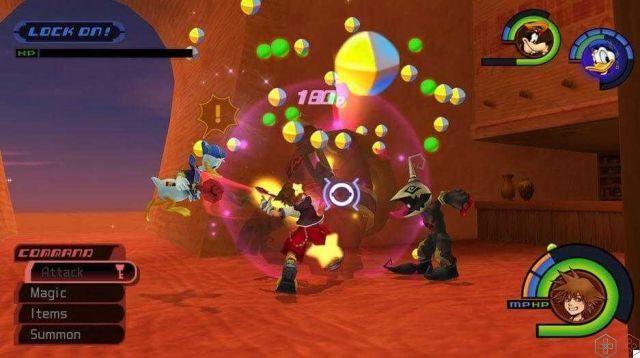 Kingdom Hearts Final Mix It also offers unpublished game scenes that will shed light on some aspects that have remained a bit in the shade in the first release and will offer an additional boss: little you might think, but enough for fans and for those who want to rediscover the Kingdom Hearts series before it conclude once and for all.

Alongside Kingdom Hearts Final Mix, we find the restored version of Chain of memories. The title, originally released on Game Boy Advance, is narratively placed after the first chapter and before the second official episode of the series. Chain of Memories is a particular title in terms of gameplay as it follows a different path from the main series. The title is a hybrid between a "Card Game" and an "Action RPG", in which all the actions of Sora and the group will be managed through cards present in a deck. To make the title more attractive, Square-Enix has added new Quick Time Events that liven up the clashes and wink at the modern player accustomed to this type of gameplay.

Again, in the main menu we find 358/2 Days, which originally appeared on the Nintendo DS. Attention: it will not be present in playable form, but only with a series of high definition videos that will contribute, too, to the reconstruction of the complex events of the crossover. The player will be able to read and view all the dialogues and learn about the story of Roxas and Axel. The exact same fruition methodology was designed for Re:coded, always included in the collection.

To enrich the complete package is added Birth by Sleep. The game is the prequel to the first Kingdom Hearts for PlayStation 2, and takes place ten years before the events surrounding Sora; centered on the journey of three characters, Terra, Ventus and Aqua, who appeared in the secret ending of Kingdom Hearts II Final Mix, while they are in search of the Master Xehanort, the game also uses a different combat system from the other episodes of the series, with new elements games such as the command console, Union-D and shooting commands. 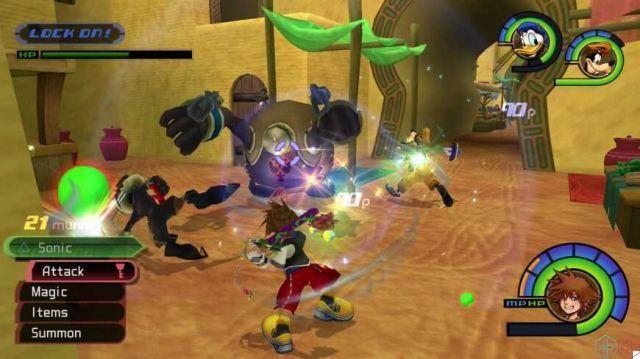 A total, therefore, of six titles, four to play and two designed above all to be enjoyed in cinematic mode. It's not cheap at all, both for fans of the series and for those approaching it for the first time. But another fact is also true: there is nothing new, apart from the graphical update. Is it good? Bad? There was a real need to re-propose, once again, the whole package. A very simple speech is always valid: if there is no good, if instead there is: it does not hurt. We are not at all sorry, after 4 years, to pick up all the adventures published so far, on a single console and with a more than decent update. We trust in the same trust from the fans. Here, maybe the price could have been slightly filed.

The two titles in their new versions at sixty frames per second turn out a feast for the eyes. The resolution now native to 1080p and the total disappearance of aliasing, make it a couple of titles recommended also and above all to fans of the series who know them by heart. Of course, the cutscenes are not always up to date and serious compression problems persist, but the two titles are undoubtedly offered in their best incarnation. If uploads close to the nonexistent are added together, the picture is as beautiful as it is completed.

Unfortunately not even these two jobs are free from problems of the other collection (let's talk about 2.8 Final Chapter Prologue). The lack of balance of the gameplay generates a series of confrontations that make you cringe. Those who are not an expert in the saga could even find themselves displaced in front of supersonic bosses and a camera that is sometimes almost too reactive. What makes the most of the noise is the fact that some sections, such as the very famous Battle of the Thousand Heartless, are populated by a disproportionate series of enemies that move at a substantially lower frame rate, generating an on-screen effect that is almost ridiculous.

These problems are not encountered much in the early stages of adventures, but explode when the clashes take on the frenzy of more advanced battles. We sincerely trust that Square Enix will run for cover as soon as possible, and given that two patches have already been made available, the road taken seems to be the right one.

8 We have replayed everything, now we wait for Kingdom Hearts 3