After a long wait, Kena: Bridge of Spirits is finally available on the market, and we tell you our impressions in this review

When I was still a high school student, the expression of in the gaming world had begun to be overused interactive movie: Bioforge, Phantasmagoria, The Seventh Guest, were just some of the names that, leafing through the magazines of the time, saw this definition side by side, although (once the mouse or pad was held) quite incorrect. For me that I was used, in this sense, to laser game from the 80s by Don Bluth (read Space Ace and Dragon's Lair), it was still a clear step forward, both in terms of pure narrative and general gameplay, but it was still very far from truly experiencing a cinema-smelling experience.

With the progress of technology, and the passing of the years, the boundary between the two mediums has ended, however, by thinning more and more, ending up more often than not giving life to exciting contaminations. Episodes of which Kena: Bridge of Spirits (subject of review) represents a true unicum as regards the fusion between animation and video game.

Death is something inevitable, even in the magical world of gaming, and it is precisely around this immutable dogma that the story told in Kena: Bridge of Spirits and our review. The young woman who gives the title to the production Ember lab, in fact, it is a guardian of spirits, and has the task of accompanying the definitive passing of the souls of the dead. A task inherited from his father, like the stick he is holding, and which will inevitably play a preponderant role within the narrative of the title.


In fact, a few moments of play are enough to come across the tender figures of Beni e Saiya, the souls of two young inhabitants of a remote and desolate village, which is ours Kena he will find himself crossing. Determined to fulfill her destiny once again, the young woman embarks on the search for the soul of Taro, the elder brother of the two kids, who has long since disappeared following a mysterious explosion originating from Sanctuary of the Mountains. A noble gesture that will set off an adventure much bigger than expected, and that will lead the girl to come to terms with her past, as well as to confront an enemy much more powerful than expected. 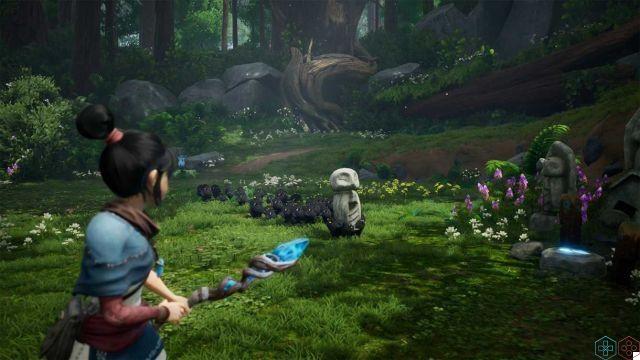 Delicate and never invasive, almost as if it were afraid of stealing the show from the beauty of what flows on the screen, the script created by the boys of Ember lab winks more than one eye on the issues dear to a Miyazaki, hatching a world in which spirits and nature are tangible and strong presences. The macrocosm of Kena, wild and sometimes rural, unfolds before the player's eyes like a fascinating fresco imbued with spiritism, inside which the feelings of its deceased inhabitants stir: hatred, resentment, wishes and promises they mix moment by moment, giving life to a series of characters far more multifaceted than one might initially imagine.

A way of telling and telling oneself that flows slowly, almost stealthily, while leaving the largest portion of the stage to pure playfulness of the affair. Perhaps it will not be surprising for the complexity and originality of the themes, but the writing that will accompany us on this journey towards the redemption of lost souls blends in a delicate and homogeneous way with the events, giving everything an enviable balance. 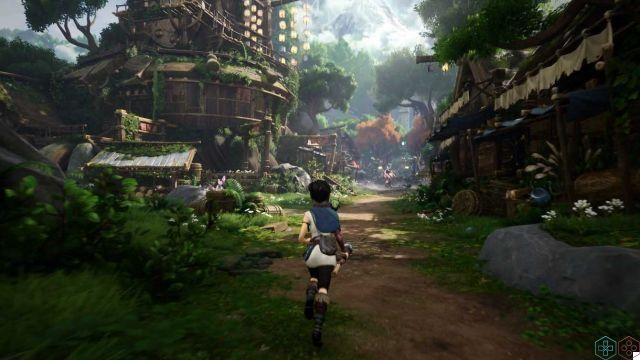 If the originality of the title certainly cannot be found within its writing, likewise that creative flicker capable of leaving astonished cannot flow into the mere gameplay of the production. Before observing between the worried and the perplexed the vote that you find at the bottom of this review by Kena: Bridge of Spirits, however, let us explain what has just been written for a moment. The title Ember lab it is decidedly derivative, given the way in which, playfully speaking, it rests on some of the most solid and well-established elements of the action / adventure creatures.

What makes the difference, however, is the way in which everything has been amalgamated and placed within reach of the pad, and which highlights a production care that is certainly worthy of note, in spite of what is the experience of the team within the world. of video games. Our heroine will be able to run, jump and climb, as in most classic of 3D platformers, but he will also be able to lead his hands when needed.

And it is right in the combat system that we find some of the best packaged elements of the game, which while putting on the plate elements once again familiar to the players, manages to create an exciting and fun flow. If called to fight, Kena will be able to count on the classic pair of light / heavy attacks (linked to the right backbones of the controller), as well as one dodge and an energy shield able to block enemy shots. From a certain point on, we will also come into possession of a magic arch and some bombs, and it will be precisely the alternation of these offensive tools to allow us to come, from time to time, to the head of the various threats, as well as to solve the various environmental puzzles present in the game world. 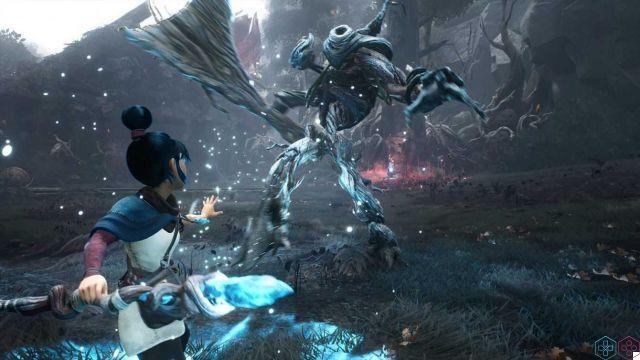 The young woman, however, will not be alone on her journey, but she will be able also count on the help of the Rot, little spirits that hide in the vast map, and that will also have a fundamental role in terms of fighting and solving the puzzles. The creatures, in fact, can be used to move or lift objects, but also to block enemies, or charge weapons with energy, so as to give life to various effects. We cannot, however, abuse their help, since to enter the field it will be necessary to infuse them enough courage, which will result in hitting enemies (or parrying their blows) in order to fill a special indicator.

What comes out of it, to the test of the facts, is a fast-paced and responsive combat system, as fun to play as it is spectacular to see, and which has its maximum sublimation in the battles with bosses and mini bosses, of which the game is rich. Never dull and predictable, these moments are able to embrace a 360 ° all the potential currently in possession of Kena, in such a way as to do justice to each of the mechanics made available to us by Ember lab. Sure, we could argue that it does skill tree dedicated to strengthening of the various tools is too elementary, but what could be seen as a small flaw (and in part it is), still has the advantage of always making the experience balanced, without our heroine ever turning into an implacable machine from war.

The exploration of the game world is also fun, which although not open, and packaging a very guided and linear experience, also knows how to give tantalizing moments unrelated to the main progression: the sub quests are not present in an overwhelming way, but both whether we are talking about archery challenges, the recovery of the village correspondence, or the finding of the Rot and their funny hats, even in the absence of an open world structure, indulging in the exploration of the environments will never be tedious , or an end in itself. Beyond the implementation care, in this sense, however, it is unfortunate to note a certain flatness in the variety of the proposed environments, which, net of some variations on the theme, will limit itself to proposing a sylvan / mountain setting. 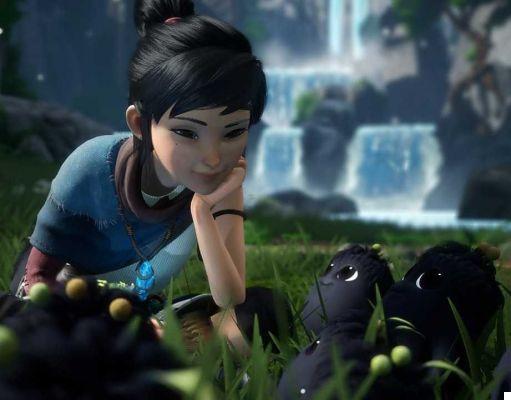 Like in a movie - Kena review. Bridge of Spirits

Since the first trailer, Kena: Bridge of the Spirits had struck the audience of professionals and players precisely by virtue of its beautiful scenic impact. And after spending about fifteen hours in his company, we can only confirm once again the goodness of the signed work Ember lab. Considering the experience gained in the field of animation, it is precisely the way in which the American studio has managed to give life to this fascinating world and its characters that amazes in a marked way.

Whether you're talking about Kena that of the other supporting actors, everything is moved in an extremely fluid and credible way, as well as accompanied by a meticulous and detailed world building able to make a difference. In fact, situations in which we will really seem to be are not rare catapulted into an animated production real, as evidenced by the excellent (albeit invasive) cinematic sequences that embellish the progress of the experience, capable of shamelessly slamming the expertise gained by the team in this regard in the player's face. 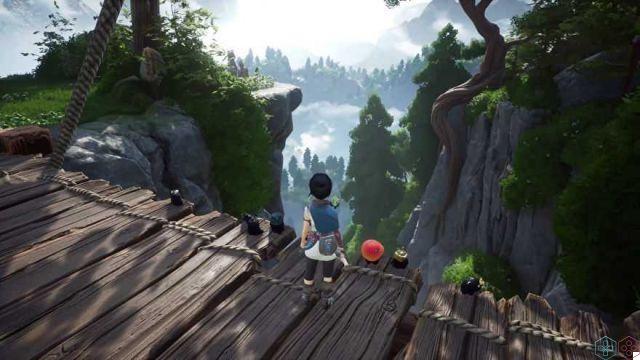 And although we are talking about a studio that can count on about fifteen elements, the richness of what moves on the screen is incredible, although there are some small slips, certainly not able to undermine the experience, but that jump to the eye precisely by virtue of this general grandiloquence. These flaws result in small uncertainties of the room, or in some rare framerate hesitation when controlling the aquatic serpents gods Red, as well as in small shots highlighted by the race of Kena. On the performance front, the game presents two distinct settings, one that points to 60 frames (very stable) sacrificing resolution, and another that blocks everything a 30 frames to ensure a 4K rendering. Personally, also given the goodness of the animations, I believe that the first option is to be preferred without reservations.

Functional, on PS5, support for DualSense, which uses haptic feedback to indicate the presence of a Red nearby, as well as broadcasting the bowstring tension of the girl. Nothing epochal, but still well implemented and pleasant. Good, without particular praise, the English voice over, even if it really is to review the Spanish localization, full of even gross errors, missing words, or subtitles left in the original language (a real pearl, in negative, the sentence that closes the credits!). Of a whole other caliber, however, the soundtrack, epic at the right time, but delicate and discreet when it is enough to let yourself be lulled by the game world. 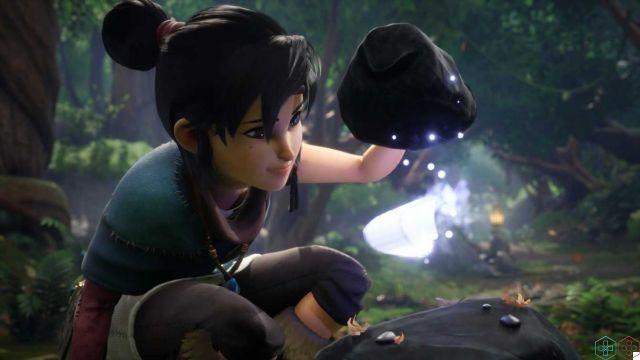 It was delayed, but at the end of the games we can not help but forgive the delay accumulated by Kena: Bridge of Spirits. The title Ember lab, in fact, while not representing a revolution in the strict sense of the genre, shows up at the appointment in great shape, thanks to a solid and fun proposal, as well as beautiful to live and see. It certainly does not reinvent the wheel, but the adventure of our ferryman of spirits is able to thrill all those who want to be enthralled by its persuasive charm.

An honest title, in its simplicity, but capable of outlining a universe that we can't wait to return to explore and experience, given the unexpressed potential that seems to be hidden under its playful side. If we had to briefly define the work Ember lab, the best way would be to describe it as a beautiful game from the PS2 era, obviously revised and corrected to marry properly with current technology. And sorry if it's a little compliment.

This concludes the review of Kena: Bridge of Spirits, which we remind you to be available for PS4, PS5 and PC. Before saying goodbye, renewing the invitation to stay in the company of techigames, we remind you that on Instant Gaming you can find many games at a discounted price.

8 Among those who are suspended ...

add a comment of Kena <br> Bridge of Spirits, play a cartoon