The new Just Dance chapter is finally available. We have tried it and can confirm that fun is guaranteed

Finally available, Just Dance 2018 he wants to intrigue us with his latest news and many, many, songs to choose from. If you want, you can read our news about the game and the basic songs that can be played on Just Dance. But let's see specifically what awaits us (the tested version is for Nintendo Switch).

A name, a guarantee

There is no one like Just Dance! So they would have sung in a famous Spanish song from a few years ago and they would not have been completely wrong. Ubisoft has created, over the years, a revolutionary dance game that brings something new with each chapter. This year the mode has arrived Kids. Thanks to this mode, the little ones will be able to take advantage of the most suitable choreography for them and dance together with their favorite characters. Indeed, it is possible to dance and sing Let it Go! together with hilt. Another novelty is the World Dance Floor. Through this mode we could challenge dancers from all over the world. But the modalities are not in short supply, let's go and see them all specifically. 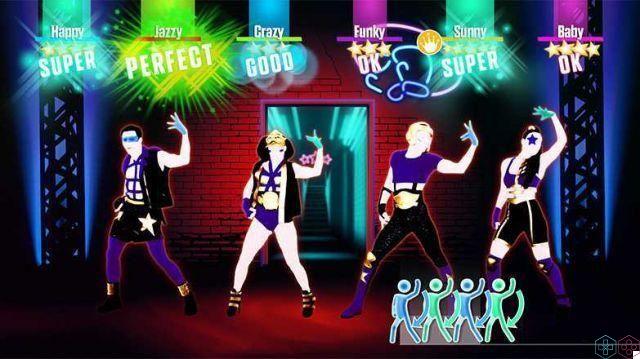 We have already introduced the mode Kids which also features some Disney songs. Let's talk more about the Online mode. Thanks to this mode, at each game, we would be sorted into one of the two teams: Red or Blue or we will participate in a tournament, or individually against all participating players. After that we should just vote for the song we want to dance to and go! Every star collection will strengthen the score of our team in the case of a team game, or it will contain the final score in the case of a single game. We will compete with and against many dancers without even realizing it, but after finishing the dance and based on the overall performance we will get a score that will add to the others obtained previously. In this way we could climb the standings online as skilled dancers.


Within the normal mode of Just Dance we could use different categories to choose our songs. However, it will be possible to search for the title of the song using the appropriate box Search. You will say, why put a box if it's only 40 songs? Well, this year Ubisoft has outdone itself with Just dance unlimited. This service is paid but will be free for the first 3 months after the first activation of the game. Through this service Ubisoft makes available more than 300 tracks. Surely you will find songs from the old Just Dance but there are many new ones and especially this year (there is Slowly, and I said it all!).

The songs are divided into categories and we will have that too Fitness. The songs within this category have choreographies directly from the world of fitness. By activating the mode Sweat it will be possible to play and take into account the calories burned and the time played. Be prepared to sweat. The categories don't end there, we have the Latin Rhythm or the Thrill Steps for Halloween. Finally we have the Just Dance unlimited category divided by letter groups, for example from K to R. In short, there is something to move about.

A gem is the mode Double Rumble which allows you to play with two Joy-Con. Of course it's just for the Switch. It allows you to try your hand at a few choreographies suitable for this type of challenge. 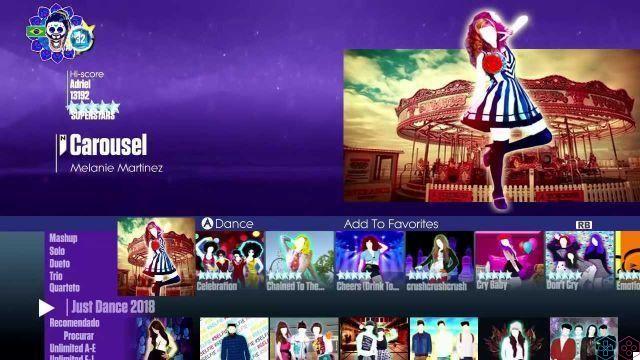 It would seem useless to have to speak audio of a dance game, however it is not. Not to mention songs that come from pre-set files and that feel great on both TV and portable mode on Switch. But the plus point to the game makes him get the little sounds, nice and no nuisance, that surround him. Such as the sound of when a prize is opened.

In reference to the graphics there is nothing to complain about a game that absolutely does not have to be in film. The small precautions that Ubisoft had to have had them successfully. All the songs that have been rehearsed (impossible to speak for the more than 300 songs of the unlimited) have well-designed choreographies and basic videos that do not distract the player. Lettering such as calories burned and karaoke of the song are the right size and do not take up important parts of the screen. The aids for the movements to be carried out, however, are not always very intuitive. If you play online and want to be competitive you will need to know all the choreographies in order not to run into impossible and unintelligible moves.

With regard to the gameplayThere is probably no better console than the Switch for getting the most out of the game. Joy-Con are the crux of the game and are perfectly wearable in your hands while moving like crazy. Do not forget the possibility of playing up to 6 players if you decide to play via the smartphone application. Thanks to the Just Dance app, it will be possible to use your smartphone as if it were a Joy-con. The only problem, which I personally encounter in any Just Dance, is the reliability in the reception of the movements which sometimes lacks.

The verdict on Just Dance 2018

Between dances in pairs, single or in groups of 4. Between who will find himself lifting his friend much heavier than him or who will have to pretend to be a bull. Between dancing, singing and laughter, you can't help but have fun. Those who want to do some fitness, rest assured that you will be amazed by the possibilities that the game offers. On Switch it probably also gives its best, it reminds me of the much loved old Wii. A little bit of everything in one of the best branded games Ubisoft.

Kholat review: an adventure in the middle of the ice ❯

add a comment of Just Dance 2018 review: dance, sing and have fun