A distant world, a ruined people and an agile spaceship: what can ever go wrong? We tell you about it in the review of JETT: The Far Shore

When you come from a success with audiences and critics that responds to the name of Sword & Sorcery, it is more than legitimate to expect to have the eyes of the videogame audience on the announcement of your next job. Especially if this is closely linked to a console as expected as PS5 was. Precisely for this reason there was a lot of curiosity around JETT: The Far Shore, the latest signed effort Superbrothers that, right, yesterday, made its official debut on the current and old gen of Sony, as well as on PC.

However, the hype born of expectation and curiosity has vanished, what is left of this space adventure with a profoundly philosophical tone? Well, let's try to explain it to you in the best possible way in our review.

Indeed, we do not deny that, net of the different approach adopted by JETT: The Far Shore, the first visual encounter with the game brought to mind some aspects of the production Hello Games, covertly quoted in the title of this paragraph. It was the space exploration setting, the graphic palette and the sometimes minimal assets, or the feeling of freedom transmitted by our agile spacecraft, that gave us that desire to discover what was hidden behind this interstellar journey. And then just over 10 hours spent in the company of Mei and the other scouts, we can confirm, in part, our initial speculations, despite having widely recognized as the title Superbrothers manages to keep the work of Sean Murray and associates.

It all begins on an unspecified planet (the future Earth, perhaps?), Whose population now seems on the verge of extinction, but whose soul is refreshed by the hope that, waiting for future generations on the Far Shore that gives the game its title, there is a chance of survival. Entrusted to a group of chosen ones, of which we will obviously also be a part, the genetic and human memory of this condemned people will be hidden inside a gigantic spaceship, whose task will be to reach the remote planet of which the scriptures speak. of the scientist prophet Tsosi. 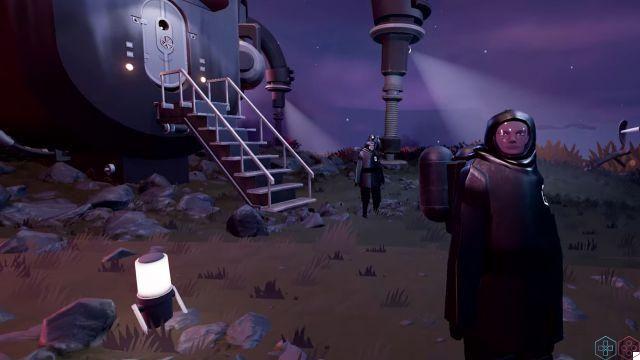 A 1000-year journey awaits our handful of explorers, who, once awakened from cryogenic sleep, will see the first group of scouts called to probe the surface of this distant world, thus starting its colonization. Constantly poised between science fiction and spiritual and philosophical reflections, the story that frames the playful events of JETT: The Far Shore it follows with a very fluctuating rhythm, starting from certainly fascinating premises, and not failing to propose moments of undoubted interest, but ending up paying the price for a development that is not always compelling (and convincing) in every aspect.

A mix of elements that, between the said and the unspoken, leave open some too many doubts, as well as the suspicion of wanting to be sometimes too pretentious and artificially cryptic. Overall, however, the epic of Mei and his companions has the advantage of arousing the right curiosity in the player, who will be constantly driven by the desire to see where the game wants to end. The problems, therefore, are to be found elsewhere. 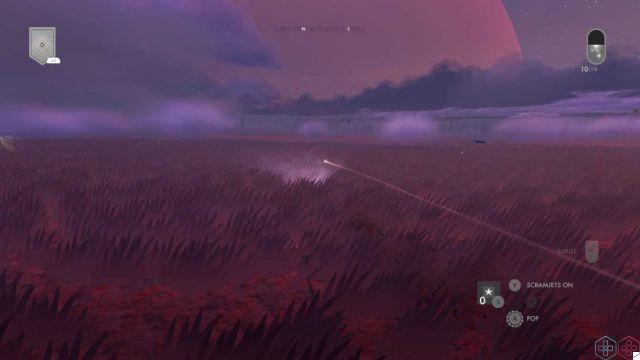 It is logical to think, at this point, as the flaws of production Superbrothers are to be traced back within the boundaries of the gameplay, and unfortunately we can not help but confirm these assumptions. Let's go, however, in order. Playful protagonist of the title will be the spaceship mentioned in the game title, an agile aircraft through which we will have to scan the surface of the planet looking for elements to analyze, in perfect style No Man's Sky. To succeed in our business, in addition to the essential scanner, we will have a harpoon (useful for transporting certain objects as needed) and a shelter, to which other accessory functions will be added later, which will allow us to wander more quickly.

The beginning of the title, or the first 4 hours or so, will therefore see us intent on exploring this unknown world, all while in the ears they will ring undeterred Isao's words, our talkative co-pilot. It is a somewhat annoying element, given that a moment will not pass without his monotonous and chanting voice coming out of the loudspeakers, which will tell us from time to time what we have to do to continue, as well as continually rattle off his thoughts and reflections.

In addition to annoying for the logorrhea, this expedient also manages to constantly distract us from what happens on the screen, since all the characters in the game will speak in an invented language, a situation that will force us to constantly keep an eye on the subtitles, sometimes making us lose sight of. given the surrounding environment. And there will be moments in which several characters will be stunned by chatter at the same time. 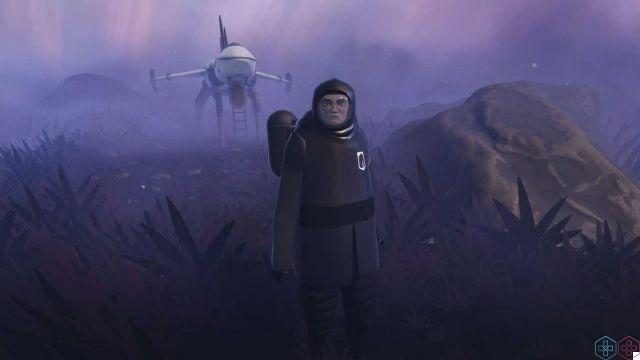 In addition, the pace of play itself, which especially in the first half of the adventure revealed itself really not very funny, as well as damn flat: all we have to do is wander around scanning at full blast, following the directives of Isao and companions, alternating everything with condensed sorties on the surface, some short evasive maneuvers, and small purely narrative moments. On paper, the situation might not seem so bad, but we assure you that the involvement of the player is very weak, to the point that in some situations we found ourselves managing the various tasks without doing anything, since our allies had already solved everything independently. While they fooled us with useless chatter.

And to think that upon the first arrival on the planet the gigantic giants that inhabit it had foreshadowed epic battles, which however ended up resulting in monotonous and tedious little missions. And it's a shame, because when we whiz freely aboard ours JETT, everything seems to work wonderfully, a sign of how the gameplay linked to our aircraft has been excellently conceived, but unfortunately not accompanied by tasks capable of enhancing its potential.

The situation becomes decidedly more exciting and lively in the very last portion of the adventure, but it is a climax that has ended up really too late, when the attention and the active involvement of the player have already failed. 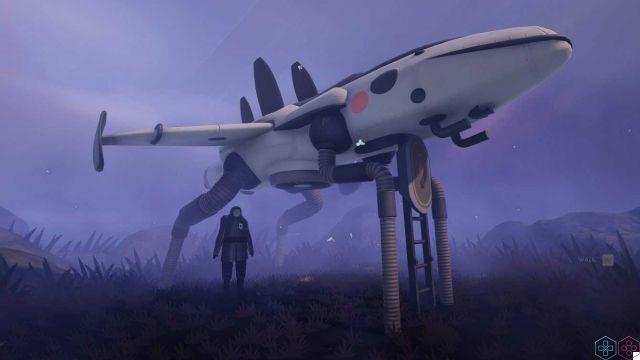 Where JETT: The Far Shore kept expectations intact subsequent to the various trailers, it is with regard to the technical / stylistic sector, which proved to be happily in line with the minimal tones suggested since the announcement. The title, while not boasting an immeasurable structural complexity, has married a truly convincing visual approach, based on simple but still effective geometries, modeled around a very soft color palette, capable of giving everything an air that is sometimes ethereal and dreamy, which fits well with the dreamlike and philosophical themes of the narrative framework.

Very peculiar is the characterization of the various characters, which especially in the portions in which they are suitably dressed they cannot help but bring to mind fragments of the Conan of Miyazaki. Look at the opening minutes of the first episode of the anime and you will understand. Furthermore, references to the Japanese master can also be grasped in the way in which the relationship between the planet and its new colonizers is treated, highlighted by some lines of dialogue, which seem to be extrapolated from the creative imagination of the Japanese author. 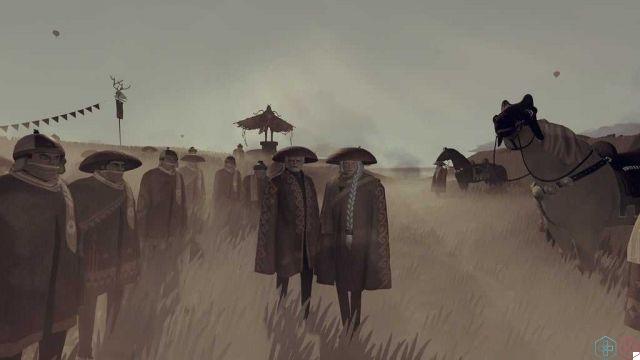 Generally fluid in its entirety, the title, at least on PS5, couldn't help but highlight a few small hesitations, which result in short freezes when loading certain game areas: something that, with the advent of SSDs, we would have expected not to see again. We also found some small bugs in the first part of the adventure, which forced us to close and restart the application, since there were no dialog options necessary for the continuation, or entire interactive elements of the scenario. In the meantime, however, a first patch has been released, therefore it is desirable that it was only a problem that has already been solved.

Where the title undoubtedly stands out, as far as the new Sony hardware, is relative to the DualSense support, which can count on one very convincing implementation of haptic feedback and adaptive triggers. Especially the latter manage to convey the overload of the motors of our JETT: a seemingly marginal feature, but which in the economy of the game really guarantees a high degree of immersion. Thumb recto also regarding the impressive soundtrack, which thanks to symphonic / electronic sounds is able to accompany our adventure with extreme punctuality and effectiveness. Revisable in its entirety, as already mentioned, the dubbing, all too monotonous and inexpressive, as well as redundant to the nth degree. 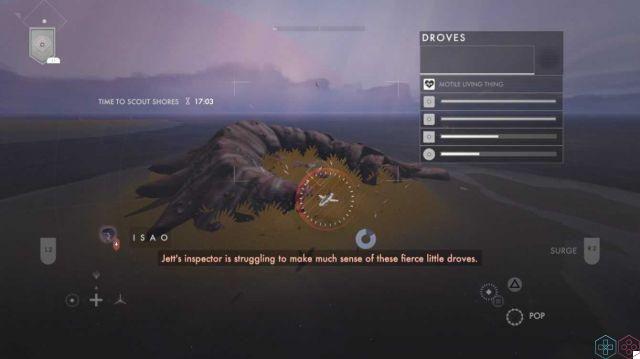 There is some regret when we come to the close of the review of JETT: The Far Shore, in light of what could really have been the new work of Superbrothers, but that in the end unfortunately failed to hit the target. Although starting from interesting premises and an all in all captivating story, the title ended up getting lost right where the essence of a video game should reside, that is the active player fun. Unfortunately the story of Mei and the other scouts drag along flat and mundane for too long, before giving a more vigorous paw to the whole, ending up being tedious and unattractive, especially in light of the potential put on the plate. Between aseptic exploratory phases and short action moments that can be decidedly revisited, the approximately 10 hours necessary to get to the credits drag wearily on the surface of this new world, ending up leaving us with an unpleasant taste in the mouth, that of the occasion badly thrown to the wind. .

This concludes our review, which we invite you to comment here on the techigames pages, perhaps after having also taken a look at the offers on Instant Gaming.