Inner Chains seemed to promise well from the first images released but, touching it firsthand, the hypothesis that the game was released in a hurry and too early becomes more than concrete.

There are independent productions that leave you speechless for how they were made and others, which, while not leaving their mark, cannot leave indifferent in front of a discrete technical sector. Then there are those productions that, while pointing out the efforts of developers in an attempt to innovate, fail on all fronts.

Inner Chains unfortunately it is placed in the last category. Presented as one first person horror shooter, already from the first half hour of the game you realize that maybe something did not go the right way, maybe more than something. Yet both the plot and the technical premises of the title they looked promising.

It is difficult to speak ill of a video game, especially when you know the commitment behind its realization. However, when a title objectively presents such gross errors in every technical area, you cannot ignore it.

Developed by Telepaths’ Tree, a Polish team made up of former members of CD Projekt RED, Epic Games, People Can Fly, Flying Wild Hog e Techland, the title is clearly inspired by the works of HR Giger, Zdzislaw Beksinski and Hyeronimus Bosch.

A horror FPS set in a surreal, dark and deadly biomechanical world like never before. Humanity is only a small part of a hostile universe. Do you want to survive? Discover its secrets.

Dealing with the narrative aspect of Inner Chains is quite difficult. We are talking about a video game that begins with an impressive cinematic introduction, which has nothing to envy to the quality of numerous great noble productions, but which ends up disappointing in every respect once projected into its game world.


The title is set in a post-apocalyptic and dystopian future, where plants, joining with man-made technology, have evolved to become real biomechanical weapons. Only a small group of people have managed to tame this new fauna and now they dominate the remaining humans, instilling fear and terror. We therefore find ourselves immersed in a society based on slavery and on religious fanaticism, fed by the ruling castes who have been able to manipulate the surrounding environment to become an object of devotion.

The otherwise incomprehensible story is explained on the Steam store page, and tells us that the character we play is none other than one of the many pilgrims who go on a journey to escape a dying world. Due to a fortuitous event we find ourselves wandering through the basement of the temple to which we were headed, and we are forced to fight against creatures attributable to zombies with biomechanical grafts.

In addition to this there are no cutscenes, notes or diaries to read. The narrative context of Inner Chains can therefore seem, apparently, really bare and above all badly cared for by the developers.

At the end of the substantial cinematic sequence, we will therefore find ourselves in a sort of catacomb that in a short time we will abandon to begin our journey in a world full of pitfalls. 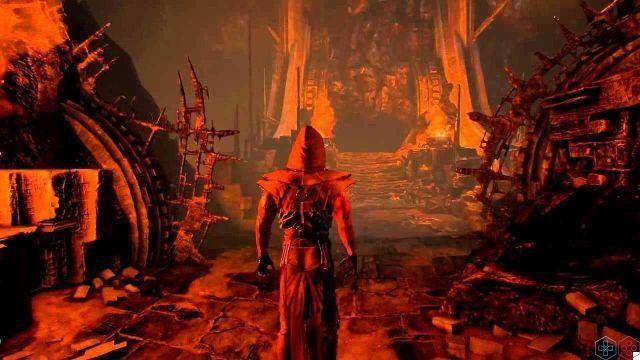 The game is described as a first person horror FPS, but there is nothing horror. No jumpscare, no creepy setting, no tension. Even creatures and plants don't look very scary.

In the first place we will perceive the environment as dark and inhospitable, initially all this will appear very suggestive. However, after several minutes, in which we will not be able to do anything but walk trying to avoid sporadic traps in the form of bio-mechanically mutated plants, everything will lead to a perpetual sense of frustration.

A gameplay to be reviewed ...

From the very beginning the fight turns out to be frustrating, at our disposal we will only have a bracelet that will indicate with bars the amount of life at our disposal, and the fists as a weapon.

The FPS component makes its entrance shortly after, when we find ourselves taking up the first weapon of the game. Specifically a kind of teaser that emits lightning, this has a paralyzing effect on our enemies and will soon prove to be a key element also in the completion of some levels, in which the platforms to disable the barriers appear in locations inaccessible to us, but can be activated through the aforementioned lightning shooter.

Subsequently, to help us in the enterprise, we will have two other weapons available: a flamethrower (it will also find its use in burning bramble walls to allow us to advance) and a dart shooter. 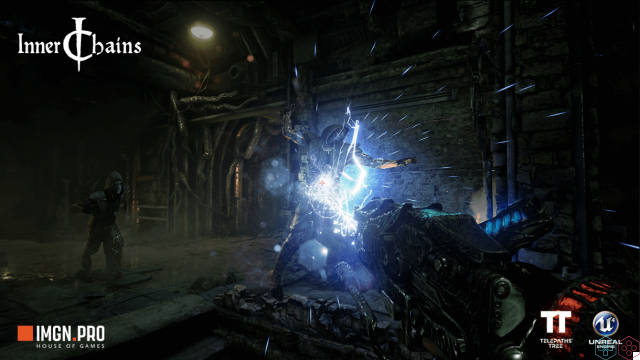 All the weapons can be reloaded thanks to the special plants that you will find along the way or by collecting ammunition from the corpses of the killed soldiers.

There is no character level, no type of advancement system and the weapons cannot be upgraded. We simply advance along this world through an established path and kill the enemies that stand in our way.

The game will push us to always fight a greater number of enemies (even bosses), trying to make them fall victim to the plants scattered along the levels or fighting them in first person, however risking run out of ammunition.

Although Inner Chains tries to define itself as an FPS, even the simple elimination of enemies takes place in such a cumbersome and schematic way, as to be an element more puzzles than action.

Even the fact of not being able to save when you want, makes the gaming experience really low quality. If on the one hand you might think that the creators have made this choice to increase the difficulty of the game, on the other hand it is really frustrating to have to reach a checkpoint in order not to lose your progress. Especially when you die one step away from it.

A hostile world with little to show. Inner Chains has several technical gaps

The graphics don't help either. If from a distance the play of light and particle effects create a beautiful effect, up close you can see how the textures are of low quality and, with very few graphics settings available, not at all improvable.

Indeed, during the first few days of release, the game was practically unplayable albeit unstable. Serious and continuous drops in frames and textures that were not rendered at the right time, made it impossible to identify with the title at its first start. It took more than a week after release to take advantage of a patch that solved the problem.

And if what you are looking for is a challenge, the product will not really be able to offer you one. L'Enemy AI is within the limits of acceptability, these will often be unable to react to our actions or passive, until we have dealt the final blow due to their poor range of vision.

To all these shortcomings is added almost no customization of the commands, including the sensitivity of the mouse. 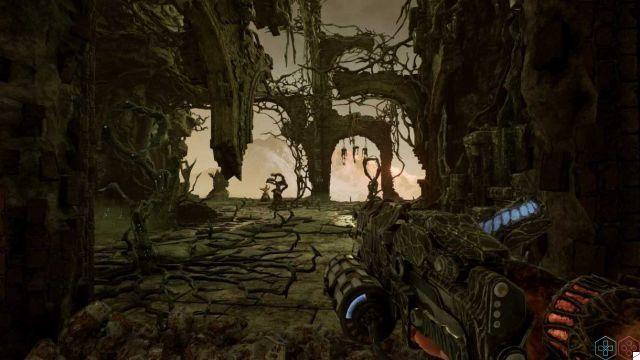 Although the developers immediately opened a channel with users to report any errors found in the game experience, it is clear that the product they released is incomplete.

Also taking into consideration that the release of the title has been postponed for a month (initially it was scheduled for April 25) it is quite likely that we are facing a work released, in practice, pending: the sense of incompleteness pervades and it doesn't even disappear during the final stages, where we will have more questions than we had at the beginning.

Inner Chains is therefore a title lacking the quality necessary to define it as a video game ready for launch, but which perhaps with the programmed patches could be re-evaluated, becoming an adventure that may be enjoyable. Telepaths' Tree hopes to succeed in this aim and to give its project the quality it deserves.

add a comment of Inner Chains review: a good idea thrown away?