Recently available on PS4 Immortal Redneck, a rogue-like FPS set in a piece of ancient Egypt that has survived to the present day. Let's find out how it behaves in our review!

Imagine living in Kansas. You have your weapons, your dune buggy, you love hunting and adventure: what should you do? But going on a nice trip to Egypt, of course! Too bad that during your raids you end up in a valley where strange monstrous beings come out of three pyramids capture you and embalm you. In your new mummy nature, you want nothing more than to make up for your attackers and, guns in hand, you throw yourself into the bloated buildings in front of you.

This is the opening words of Immortal Redneck, un FPS rouge-like (but mostly rogue-lite) with an upgradeable skill system and various classes to choose from. Let's find out all the details in this ours PlayStation 4 version review. 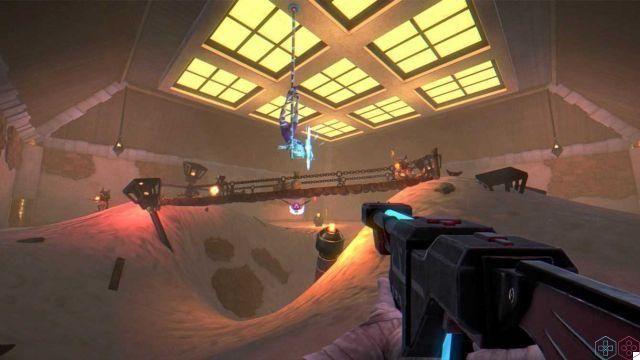 Let's start immediately from the nerve center of the game: the shooter element. Each of our games will see us face a pyramid. This is divided into levels of increasing difficulty, in turn divided into rooms: each room will send against a series of enemies that we will have to shoot down with bullets. At every game, the pyramid is composed in a causal way, keeping faith with its rogue-like nature.

We will quickly understand that Immortal Redneck focuses heavily on speed and three-dimensionality: the rooms are always structured on several floors with platforms, stairs and shelters almost everywhere. Our character can climb almost any element in the room and, after taking our hand a bit, we will find ourselves hopping from side to side to keep opponents away from us and to avoid bullets.


Dynamism and immediacy are the foundations of the game and the gunplay itself underlines this idea: the weapons do not require aiming but shoot directly, the boxes of ammunition reload all the weapons in our possession (three, basic) in a rather generous way and the auto-aim corrects even the worst mistakes aiming (it can be disabled but targeting enemies is still easy). The variety of guns, which increases as you progress through the game, is also great. Opponents have their own characteristics (including attack range, movement speed and life points) and will push us to move and fight differently.

The only limit, in this area, is linked to the spawn of the monsters: these will not appear in the room all together, but will be charged in waves (very close together, in the first seconds). The problem is that we will often find an enemy in the corner of the room behind us that we thought was safe. To accentuate this defect there is a sound problem: most of the opponents do not produce sounds useful for recognizing them and understanding their position. The only solution is, game after game, to learn how they will spawn in each room and to find a completely safe area.

In general, Immortal Redneck gives us a simple, fast and dynamic gunplay. 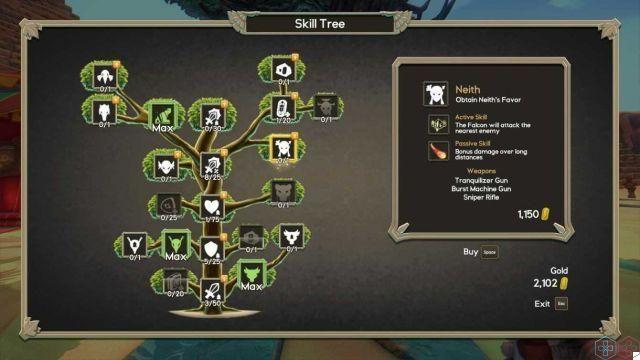 When we are defeated, we will find ourselves again outside the pyramids, ready for a new attempt. Before we throw ourselves back into the fray though, we will have to exploit the money earned: the enemies we defeat, in fact, in addition to crates of ammunition and healing steaks, release generous quantities of gold. This must be spent to consolidate the skills of our character: through a skill tree we will be able to enhance the statistics of the Redneck (attack, life points, defense, probability of critical damage ...) and we will also be able to acquire the favor of various Egyptian gods.

These, in practice, are classes that differ in statistics, different starting weapons and unique abilities (for example, Apis has four guns and can become invincible, but can only make one jump, while Hathor has a grappling hook and increases found gold). The unspent money will be lost the next time you enter the pyramid: the goal is therefore to be able to last long enough to be able to afford to acquire some skills. Rest assured though the game is simple and you will be able to earn an abundance of it in every game.

The variety and the enhancement of the character are not only linked to the skill tree: inside the pyramid, through chests and enemy drops, we will get some scrolls. These can improve or worsen our statistics, or they will give us special effects (such as freezing bullets) or malus of various kinds (inability to manually reload or change weapons, for example). We will not be able to know what fate will give us, so we will not be able to do anything but collect them and hope. All these "modifiers" will only be valid for the current game. There are plenty of them, but the gameplay doesn't vary much thanks (or to blame) to them. Don't expect The Binding of Isaac-style combinations and synergies, to understand.

So let's talk about the pyramids. Structurally, as we have said, they are divided into levels and rooms. The latter will tend to repeat themselves soon, but even after hours there will be some secrets and movement tactics to be revealed. Our goal will be to complete all levels of the pyramid: to do this, we will have to defeat two bosses. One will be in the middle of the pyramid and one at the end. Defeated the final boss we will have access to the second and then to the third pyramid. Once we have won that too, we will be able to enter the infinite Tower: the name already says it all, it is a score challenge in which we will have to survive as many levels as possible.


The challenge, in theory, is linked to the six bosses: these are unfortunately not very interesting for mechanics and overall style. The real problem, however, is the final boss of the first pyramid: its weak points are awkward to hit and, moreover, its power is off the scale compared to the rest of the pyramid (but also compared to subsequent bosses). Nothing impossible, but the less patient may get bored with this sudden spike in difficulty. Fortunately every match will make us more powerful, so sooner or later we will be able to win by sheer brute force.

Each pyramid, of course, has its own visual style, as well as new enemies, new weapons and new rooms. Immortal Redneck is graphically pleasing, very colorful and varied, and never misses a single frame, which is crucial in this type of game. The sound, in addition to the aforementioned problem, is adequate, including background music and effects related to weapons. Our Redneck will make a few comments from time to time: nothing in particular, but the pleasant accent of Kansas will remind us that we are American tamarri and not just an indefinite avatar.

Immortal Redneck is a fps with light rogue-like elements and an inevitable enhancement system. It's certainly not the most profound and varied title out there, but entertains with its simplicity and speed. Each game can take up to an hour, and in total, expect to need between 15 and the 20 hours to get to the end of the third pyramid. After that you will have nothing else to do but try your hand at the challenges related to the trophies and the Infinite Tower. The game is completely in English and is available, as well as on PS4, also for PC and Xbox One.

Thanks to the developers, Crema, for granting us the review code.

7.8 For lovers of dynamism

Injustice 2 review for PC: the future of fighting games ❯