Hue review: the colors of a little surprise

From PS Plus comes Hue, a little gem with sparkling colors: let's find out why it shouldn't be underestimated in our review

When, a couple of weeks ago, they were announced PlayStation Plus October titles, all of us were slightly distracted by big names like Metal Gear Solid V: The Phantom Pain and Amnesia: Collection.

Among these, however, there was a certain Hue. I knew very little about it. In addition to a musical suggestion of the name, I was aware that everything revolved around colors (and in fact hue means shade). Several times over the months I had noticed it among many other indies, but I had always ignored it: well, this review is to advise you not to make the same mistake as me. 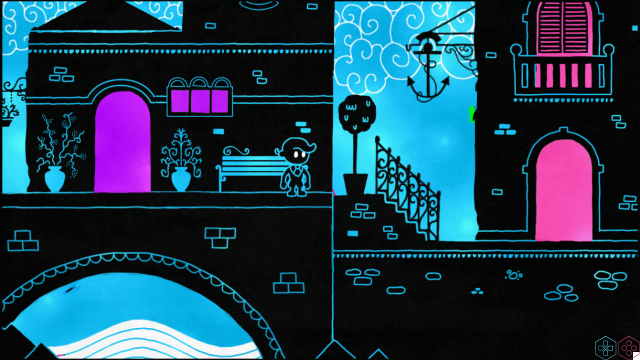 The fishing village of Hue in its nuances

Hue - a palette of colors

Developed by fiddlesticks and digitally distributed by Digital Curve, Hue is available from 30 August 2016 on PC, Xbox One and PlayStation 4 (version we played). The PS Vita version was released in November of the same year.

Hue is a puzzle-platform 2D, that is a work that is divided between hops and puzzles to be solved. We play a little boy who wakes up in his own home, one of the few in a fishing village. The world around us is black on gray. This, at least, until we find a color (blue) and we will be able to erase the greyness of our village.

The evolution of the colors of Hue

As we said, Hue turns out to be a puzzle-platformer. The game is divided into areas: each of them is made up of a series of rooms and our aim is to reach the exit door. At the end of each area we will get a new color and, above all, we will be introduced to new game mechanics.

Initially, in fact, we will only have to become familiar with the change of color and with the movement of some cash. Is an orange wall blocking that blue chest? Let's turn the world orange and the crate will have the green light. And where should I push it? Maybe in that hole full of deadly spikes too long to jump.

As we advance, however, new possibilities will be introduced. Deadly lasers, moving objects, colored paint sprayers. Everything will blend area after area giving the best of itself in the final stages. The balance between puzzle and platforming is very good throughout the work: the initial phases will have a preponderance of the platform component, leaving the real puzzles for the second half of the work. An excellent crescendo that allows you to understand all the game mechanics and feeling constantly stimulated. Also great is the fact that the jumps are never too difficult: when you understand how to continue, you will never find yourself dying over and over again because you can't get the timing of a jump.

In general, Hue turns out to be a work suitable even for the less experienced of the genre: it's never really difficult, but it's never trivial either. 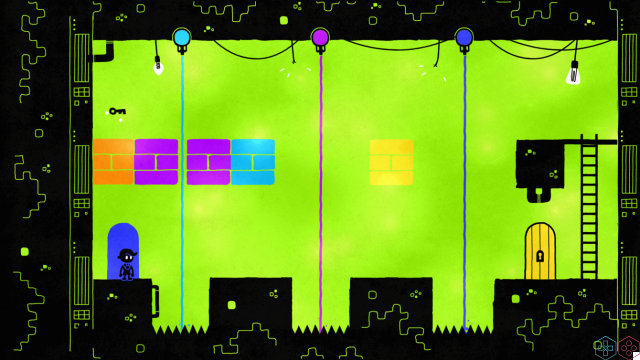 The excellent game structure comes painted through an extremely effective minimalist style. Hue is a delight to see from start to finish. Perhaps a little sorry that most of the environments are simple caverns and caves. Although these are embellished with small details that show the care taken by the team in their creation, more iconic places would have made the experience more intense. Only in the finale will we see a change of setting that earns some points for the work.

What the setting fails to give, however, we can obtain from very human and interesting storytelling, which is mixed with very light philosophical reasoning. Hue, in fact, does not go on an adventure without reason. We will soon find a series of letters that will inform us about the reasons behind the young man's trip. These will be read by a melodious female voice, while the subtitles will scroll in the lower part (English only).

In these sequence we can see a refinement of design that I consider commendable. Let me explain.

In the moments when we find ourselves having to listen to a narrator and read subtitles, a small problem arises: we cannot play and read / listen carefully at the same time. If the game stops us in place, trivially, we are forced to remain still and do nothing for many seconds: this tends to make many players impatient. If, on the other hand, we are forced to continue (perhaps due to the presence of enemies, so to speak) we risk losing part of the narrative. Hue, on the other hand, when he wants to "force us" to discover the plot, confronts us with a very banal platform sequence. We just have to walk, do a few hops, climb a ladder - all manageable even while staring at the subtitles. The time it takes to read will be the same as it takes to get to the new play area.

To this we add the very high quality of dubbing and, in general, the audio component of the game. If the environmental effects are as minimal as the graphics, the same cannot be said for background music that envelops every moment of the game in a perfect way.

Hue: who should buy it?

Hue therefore turns out to be an excellent puzzle-platformer with a high quality graphic and sound style. It is highly recommended for all lovers of the genre, even those who tend to turn up their noses when the reasoning of the puzzles is mixed with the jumps of the platform. Let's repeat it: even the puzzle component doesn't push much on the difficulty so, if you have breakfast with Stephen's sausages, Hue could be a bit faded. The only flaw is perhaps the longevity: expect to get to the end in about 3-4 hours. Replayability is only guaranteed by a handful of collectibles. Unfortunately, these are almost exclusively related to backtracking: most of them will be blocked by a wall of a color that we do not yet have.

8.7 The color of quality

add a comment of Hue review: the colors of a little surprise