How to paint Games Workshop miniatures - Tutorial 26: Horses of Rohan

How to paint Games Workshop miniatures? In this tutorial, we will show you a number of painting techniques for decorating your Citadel miniatures. In this new guide we will see which steps to follow to paint your Rohan horse models!

Welcome back to Painting workshop by techigames! After the previous tutorial on Faramir, which you can view on this page, we are back with a new guide in which we will see how to paint your own models of horses of Rohan, with very simple techniques using colors Citadel and therefore be able to expand your collection of miniatures Games Workshop to undertake the Strategic Battle Game in Middle-earth. In the next tutorial we will show how to decorate the knights of Rohan, in order to position them on the steeds of this number and thus complete these models.

We remind you that the miniatures, the colors and all the tools for modeling are available on the website www.games-workshop.com. 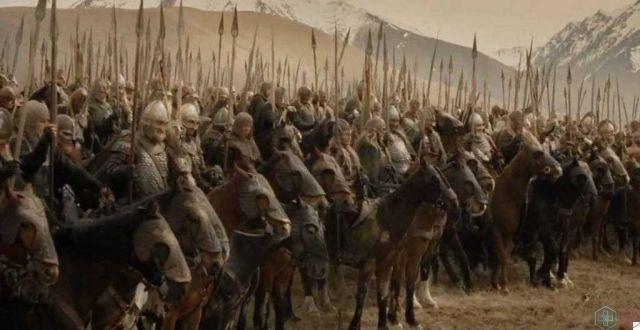 Rohan is a nation of Middle-earth, also called the "home of the Horse Lords". It is located south of the mysterious Fangorn Forest, while the southern borders are bordered by the White Mountains, which extend from the Rohan Breach to Minas Tirith. To the east and west are Isengard, the realm of Saruman the White, and Anduin, the Great River, respectively. Rohan is very famous for horse breeding, especially the Mearas, the royal breed of Theoden and his descendants. 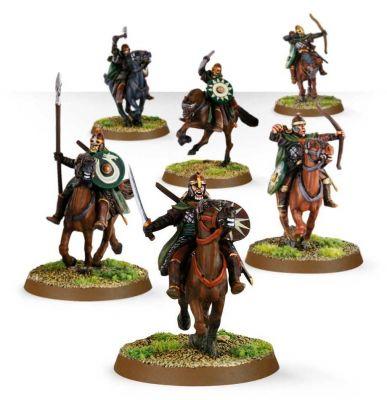 Set Games Workshop of the Knights of Rohan

If you are interested in more information on the history of Rohan we refer you to the Wikipedia page.

To know the different basic painting techniques, useful for all Games Workshop miniatures, we recommend that you visit this page.

We remind you that Rohan's horses are also present in the box "The Battle of the Pelennor Fields". 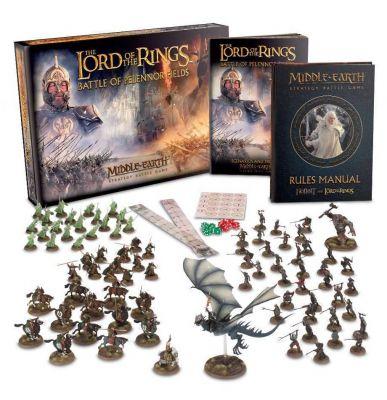 Compared to the previous tutorials, this time the first thing to do before starting to paint your plastic miniatures of Rohan's horses is to gently remove them from the mold with a classic cutter, paying particular attention not to damage them. Once this is done, carefully remove any excess burrs that remain after the casting process with a utility knife. Once this operation is complete, join the two halves of the horses with plastic glue and fill the joints with green matter, in order to create continuity of material. Once this is done, fix the models onto their bases using some glue, available on the Games Workshop website or in any DIY store. 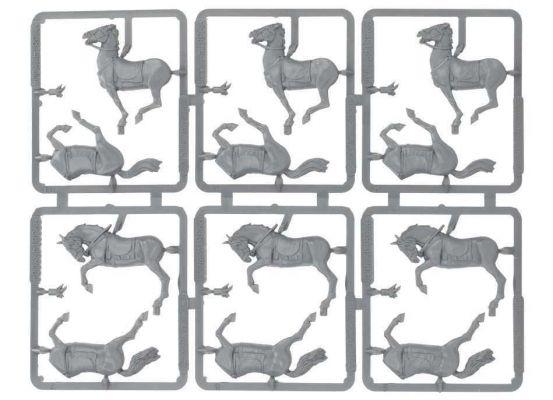 Practical tip: on each base there are two holes, one for the horse and the other for the tuft of grass. Before gluing the horse, insert it into the holes to locate the exact one and, when you find the position you prefer, fix everything with the plastic glue. 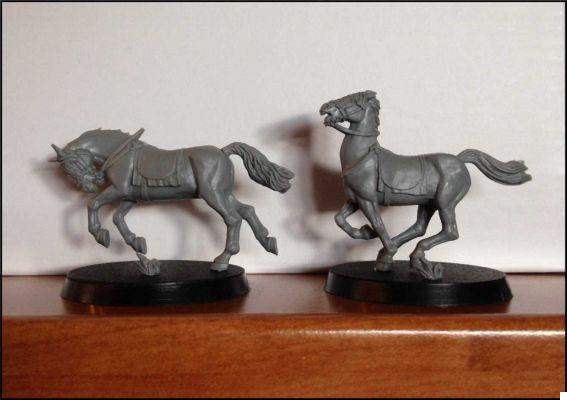 Horses of Rohan assembled on their sideburns

Once you have assembled the models of your Rohan horses, you will need to give a color base to have a base color to work on and to properly adhere the shades you will apply in the next steps. Always remember that the important thing is to completely cover the material your miniatures are made of. To get an even layer of color use Citadel Chaos Black spray, as horses are characterized by relatively dark shades. Be very careful when using the spray and be sure to use this technique in well-ventilated areas. 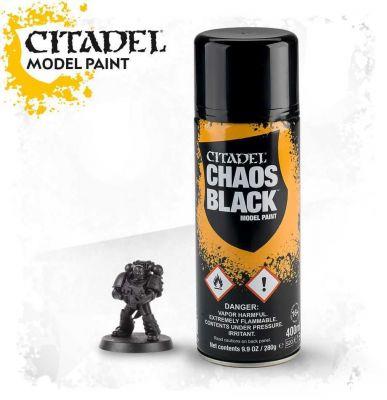 Practical tip: If you plan to paint the horses a light shade, you can also apply Citadel Mechanicus Standard Gray and Corax White sprays. Also, using the spray, you should cover all the horses at the same time. To ensure that the color reaches even the most hidden areas, fix all the models close to each other on a sheet of cardboard with repositionable glue or double-sided tape, to be able to remove them easily after having painted them; while using the spray, rotate the cardboard, so as to apply a uniform color base on all the miniatures. Despite this, sometimes the spray may not be able to color all areas of the models, so it may be necessary to perform some retouching with Abaddon Black after this operation.

Alternative: if you don't have Chaos Black spray available, use Citadel Abaddon Black in a bottle; shake the jar well to mix the color correctly, then use the brush to put a drop on the palette and add a little water to dilute it slightly, as too thick a color would be difficult to apply and ruin your miniatures, covering the details . If the color is too liquid, add a little more to thicken it. 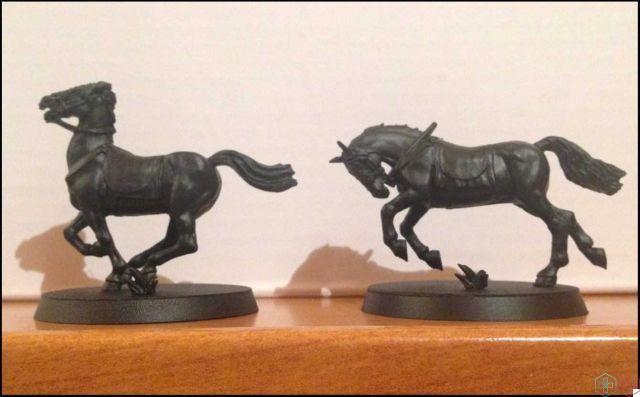 Rohan's horses at the end of the black primer

In this tutorial we will see how to decorate three types of horses: dark brown, light brown and gray. If you decide to experiment with a few other shades, such as black or white, you can use the same basic principle.

In the case of horses with dark brown coats, start applying Rhinox Hide on all visible areas, leaving the mane and tail black: brown and black will be the basic colors. To make the model more realistic, it is now necessary to shade the most hidden areas and you can then apply Citadel Shade Agrax Earthshade evenly. When the ink is dry, it restores the base color on the larger parts of the model, then you can highlight all the raised areas using an equal part mix of Rhinox Hide and Mournfang Brown with the ruling technique. To lighten the mane and tail, on the other hand, use the Ashin Gray with a dry brush. Finally, for an extreme highlight in order to highlight the muscles, you can apply the Mournfang Brown always with the ruling technique, while to further lighten the mane and tail you can apply the Dawnstone with a dry brush.

Practical tip: if you want, you can also experiment with other Layer shades (always lighter than the base color), such as Doombull Brown and Gorthor Brown, not to be applied together because then the effect would not be realistic. In that case, the extreme highlighting could be achieved with Tuskgor Fur and Baneblade Brown respectively. 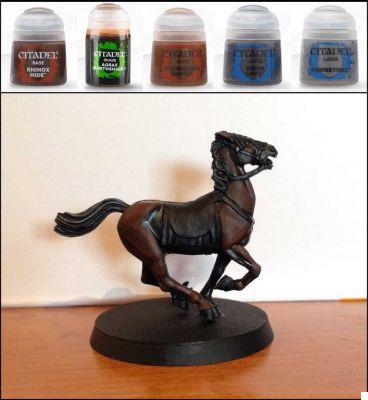 To paint the horses light brown, you can repeat the same techniques described above, but with the following colors: 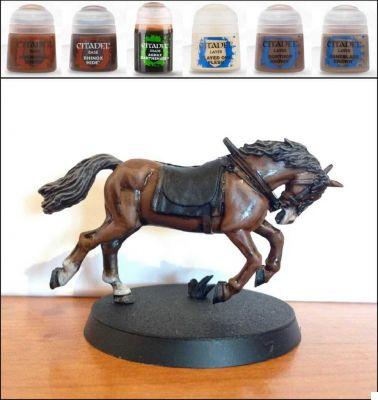 If, on the other hand, you want to decorate the horses using shades of gray, follow these steps: 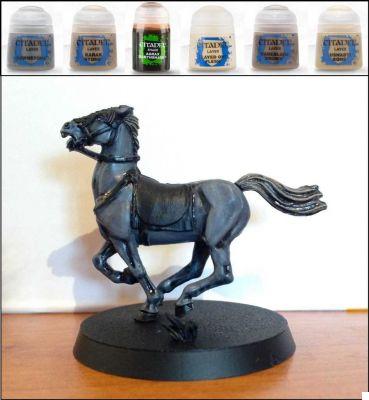 To paint teeth and tongue you can use Ushabti Bone and Bugman's Glow respectively, then lightly shade with Nuln Oil and finally lighten with Screaming Skull in the first case and Cadian Fleshtone in the second.

For more details, you can customize your horses with appropriate markings and balzane, bearing in mind that, although the steeds of Rohan are harnessed with the headboard that limits such decorations, sooner or later you will happen to paint horses with the face uncovered, such as for example Ombromanto by Gandalf and Brego by Aragorn. 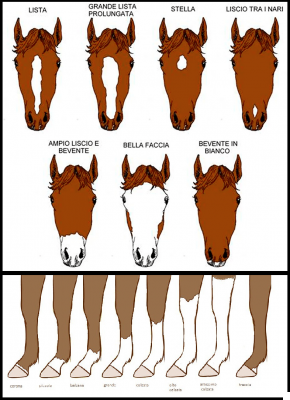 Examples of markings and markings for horses

Another important detail concerns the hooves, as it should be taken into account that in the case of horses characterized by light fit, it is difficult to see black hooves, so in this case you can lighten them with Gorthor Brown as a background of color, and then highlight them with the Baneblade Brown.

Step 4: Painting the saddle, reins and bridle of the Rohan horses | How to paint Games Workshop (Citadel) miniatures

You can paint the saddle and cover underneath with Gorthor Brown and Deathworld Forest respectively as base colors, then apply a wash of Agrax Earthshade and let it dry. At this point, lighten the outer surfaces with the ruling technique, using an equal mix of Gorthor Brown and Baneblade Brown for the leather parts, and Straken Green for the green fabric. Finally, use Baneblade Brown and Nurgling Green with the edging respectively.

For the bridle, being parts in leather, he uses Gorthor Brown as a background of color, and then uses Baneblade Brown with the edging.

Regarding the headboard, on the other hand, you can apply both a gold base color, like Gehenna's Gold, and silver, like Leadbelcher. When this is dry, wash with Nuln Oil and then use lighter tones such as Auric Armor Gold in the first case and the Ironbreaker in the second, which you can apply with the dry brush technique, but be very careful not to stain the surrounding areas already painted.

For all metal belts Runefang Steel is fine.

Horses of Rohan at the end of stage 4

The last step to complete your Rohan steeds is to decorate their sideburns: to do this, you can for example paint them totally Mournfang Brown and then apply a small amount of static grass or modeling flock with vinyl glue, to recreate a turf. You can also add some crushed stone to give a classy effect and remind you of the terrains of Rohan. Also, remember to paint the plastic tuft of grass with Castellan Green, then shade it with Agrax Earthshade and lighten it with Loren Forest with the ruling technique. 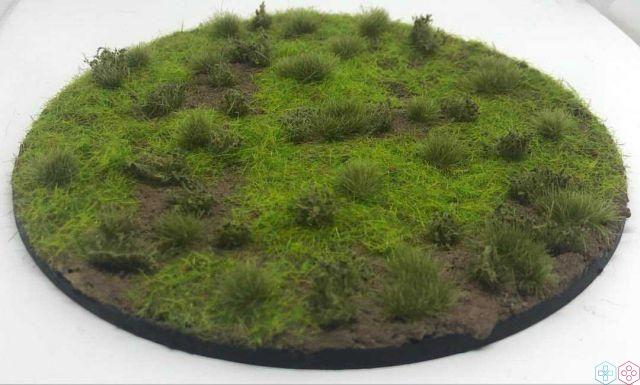 Base decorated with common modeling flock

Practical tip: to apply the static grass or flock, first spread the glue on the upper part of the base, then immerse it in a jar containing the grass, so that it adheres perfectly.

Alternatively you can apply a Citadel Texture such as Stirland Mud or Astrogranite to create a rocky brown or gray effect. Whichever you choose, paint the edges of the base with XV-88 or Mechanicus Standard Gray accordingly. When the Texture is dry, gently drybrush a lighter color to highlight, such as Terminatus Stone (Dry) in the first case or Slaneesh Gray (Dry) in the second. Finally, to complete you can add the Clods of Mordheim or Middenland, in order to enrich the base with tufts of grass and very reminiscent of the wide valleys of Rohan. 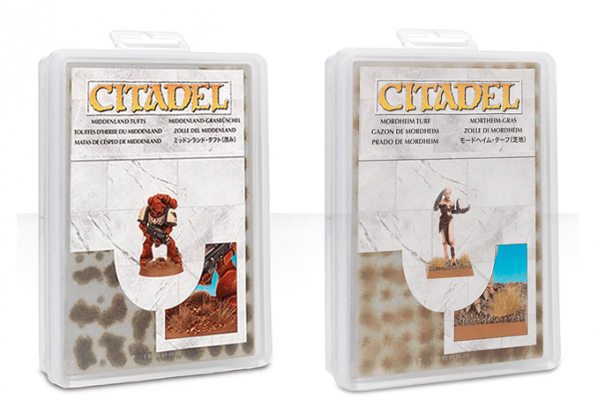 Clods of Middenland and Mordheim

Completed the bases, keep your horses in a sheltered place waiting for the next tutorial where we will see how to paint the knights of Rohan!

This tutorial from the Techigames Painting Workshop dedicated to decorating Games Workshop miniatures (eg Warhammer or Lord of the Rings) also ends here. For any questions or requests we are available via the comments box below!

Appointment to next Saturday with a new tutorial!

add a comment of How to paint Games Workshop miniatures - Tutorial 26: Horses of Rohan